It has been rough for fans of the mecha genre for quite some time now. What used to be the quintessential genre for anime is relegated to a few titles in the genre every couple of years, and they are rarely any good. The same goes for games as well. While not nearly as predominant to games as they are to anime, there was no shortage of mech games for quite some time in the world of gaming. Titles like MechWarrior, Zone of the Enders, and even arcade classics like Cyberbots kept the genre alive for a long time. That hasn’t been the case for a while though, so as a fan of the genre, whenever something along those lines pop up, it becomes something to keep an eye on. Such was the case with Override 2: Super Mech League.

The first Override flew under the radar, but for those who did know about it, it was a fun brawler that had a great foundation to be built upon further. Considering how low key the original was, I was honestly surprised when a sequel was announced. Let alone that they had acquired the rights to use Ultraman, specifically from the Netflix series that released last year. However, what is disappointing about this follow up is that despite the solid foundation set up by the first, almost none of it has been improved or iterated upon in any kind of meaningful way. Some elements were even stripped away or taken out altogether.

To start off with, there isn’t a lot to do in Override 2: Super Mech League. You can play online, play against the computer, and play against friends locally. The story mode from the original has been removed and instead the player is a nameless mech pilot who works with their agent to work their way up the league. The first game established some interesting lore, and nuggets of that are sprinkled throughout your agents (often repeated) dialogue. I am surprised that not even a bare bones story with text and static artwork was added on. While it wouldn’t have been much, it would have been something at least. A simple, sports movie like narrative could have been woven between the battles to give them more context. As it stands though, you just enter fight after fight with no real narrative purpose. 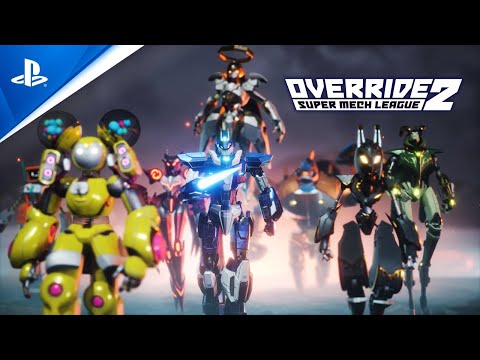 Override 2 ain’t the deepest, but it is fun

So what is the fighting like? Well the game plays like one part Power Stone and one part anime fighter, akin to the Naruto: Ultimate Ninja series. This is not meant to be taken as a serious, competitive fighting game. Neither are the two games I just listed, but through solid mechanics and interesting characters it is able to at least be a fun time with friends. The perfect example of a “side tournament” game. You control your mech along with up to three other opponents and stomp around stages with different obstacles and themes. Once in a while an energy source will show up that you can stand in and begin charging your super meter that lets you use your Ultimate attack.

The mechs have a weak punch, strong punch, weak kick, and strong kick corresponding to the four shoulder buttons. You can also throw your opponent, jump (and therefore have access to aerial attacks), and grab items that spawn on the stage. There are no real “combos” in the game. Each character can string two or three attacks together, and while a third or fourth hit can be tagged on, it isn’t a true combo and the opponent can knock you out of it. This makes combos feel more like Killer Instinct than something like Street Fighter. You have to vary how you end your combos to keep your opponent on their guard. You have to mix in a throw, projectile, or special move to vary up your offense.

However, if you’re playing against the computer it won’t matter as the AI is dumb as rocks and will just eat your heavy kick every single time. I really wish there was a way to increase the difficulty of the AI when playing against the computer. The most difficulty the game has to offer is from “contracts.” While playing the single-player career mode, you will randomly get contracts from companies to earn in game currency.

Fun to a point

The problem is that many of these contracts are incredibly difficulty to fulfill. For example, a common contract says to use 10 ultimate moves in 30 minutes. As all the contracts last a certain amount of real world time. Now that means you have to play 10 battle in 30 minutes. That is three minutes per battle, and you have to land the Ultimate in each match, which often takes two or three trips to the energy bath that randomly shows up on stage during the fight. If you miss even one of those, you are basically out of luck.

Even worse than that is the fact that the rewards for completing these contracts are miniscule. You gain more currency by just playing the matches normally than by fulfilling contracts, so it isn’t even worth the effort. I stopped attempting contracts altogether when the last one I acquired asked me to do 100 throws in an hour. Without even trying to do the math, you can tell that the effort isn’t worth 500 pieces of in game currency.

This frustration is also compounded because 99% of the time you will be playing against that aforementioned braindead computer. When I last checked on Steam, there were 50 players at maximum playing Override 2: Super Mech League. This number is much lower on consoles. It takes forever to find a match, and most of the time you just won’t find one at all. As of right now, there is no cross-play for the game, despite it being available on Switch, Xbox, PlayStation, and PC. For a game that is already coming out of the gate with a niche appeal, this is a deathblow. Cross-play is supposed to be added at a point in the future, but I feel it will be too little too late by the time that does happen. The game really should have waited until cross-play was fully functional before releasing, because as it stands now, online is a ghost town barely a week after the game’s release.

A lot of little issues add up over time

I am going to make a bold statement here, but I really feel like this game should have been free to play. Similar to Killer Instinct, it should have released for free with a few characters for players to try out, and then get more via separate purchases if they liked what they saw. Even at a reduced price of $40, there isn’t enough here to justify a purchase between the barebones game modes and lack of online support. Which is a pity because when I actually did get a match the netcode was great. I experienced almost no latency or lag in the few matches I played.

I don’t want to sound like I am saying that Override 2: Super Mech League is a bad game. The mechs themselves look great and the combat is fun on a very basic level. Although the game’s framerate can take a nosedive if there is a lot of stuff happening on the screen at the same time. This doesn’t happen enough to be a consistent issue, but the wrong characters on the wrong stage can turn the game into a slideshow. Override 2: Super Mech League feels like a game that either wasn’t finished or wasn’t fleshed out enough before releasing. So many aspects of the game feel half finished.

The combat has a good starting point, but it isn’t different enough from the original to make it stand out in any meaningful way by iterating on that basic combat structure. Plus, there are all the small quality of life issues that riddle the game, like the aforementioned lack of selectable CPU difficulty, the pointlessness of contracts, or the fact that you have to unlock all the mechs for career mode even though they are all available in versus mode.

As well as much bigger issues

A lot of relatively small changes could have been made to make Override 2 stand out as a fun secondary game in between matches of Street Fighter, Tekken, or Dragon Ball FighterZ. A third entry could make a really big splash if it completely overhauls and improves on every aspect of the game, but I don’t think that will happen. If it was, it probably would have happened already with the time between the first and second game.

Override 2: Super Mech League is a game held back by its own limitations. A solid and enjoyable fighting system is hampered by dozens of small quality of life issues and its great netcode can’t be enjoyed because nobody is playing it.