Mrfreshasian went back-to-back as a pro-am winner at the Australian Open Fortnite event!

Day one of the Australian Open Summer Smash event has concluded after some surprisingly entertaining pro-am action. When the final match came to a close, Mrfreshasian, Lachlan and Enschway walked away with the $30K grand prize to their chosen charities. Their collective performance amounted to 63 points over four games in the trios format. The pro-am victors finished seven points ahead of benjyfishy, Aliythia and Richie Stanaway. Each trio earned some of the $100K USD prize pool for a charitable cause.

Mrfreshasian and Company Declared the Winners

All three competitors displayed extreme hype when the leaderboard revealed their names in the first place position. Mrfreshasian, Lachlan and Enschway gained the opportunity to donate a portion of their winnings to charity. During a post-tournament interview, Mrfreshasian stated that he would be donating to the Hunger Project, whereas his teammates Lachlan and Enschway are respectively giving to a local Queensland hospital and the Black Dog Institute. Some of the highlights from this trio included a game two Victory Royale, where Mrfreshasian last eliminated Symetrical of Counter Logic Gaming and a 14-elimination second-place finish in their final match.

In addition to winning prize money for their chosen charities, all three players received a trophy to commemorate their victory in the pro-am competition. 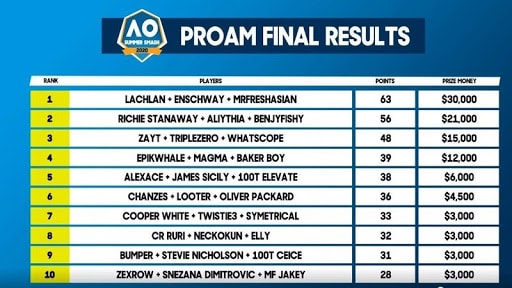 The tournament stayed close until the final results rolled out. Some notable names inside the top ten include Zayt, EpikWhale and Benjyfishy of NRG Esports, Elevate and Ceice of 100 Thieves as well as Symetrical of Counter Logic Gaming. The pro-am event provided a stage for players to accustom themselves to the setups in advance of the $400K USD solo tournament on day two.

One of the more notable moments from the broadcast featured several trios emoting in the middle of match two. LazarBeam, Jynx and Rel are just a few names involved in this conga line. All players selected the gingerbread skin and had some fun with the pro-am competition. This moment instantly became a meme on both Twitter and Reddit.

A few moments later, Zayt came storming in to ruin the conga line with a sniper headshot to Benson. The NRG Esports player proceeded to attach the remaining members of the conga line, including LazarBeam. The crowd responded with a course of boos, but Zayt picked up some free eliminations, which eventually led to a third-place finish and $15K USD for charity.

In a Twitter thread after the tournament, Zayt and LazarBeam discussed the incident. It was all in good fun, but Zayt will not be winning any popularity contests any time soon.

This Pro-Am event was a bit of fun before the chaos of the Solo tournament, which will take place later this evening at 9:30 P.M. on the Australian Open Twitch channel. Check out our Australian Open Summer Smash 2020 preview before the action gets underway.