The standings stayed firm at the top, while some teams towards the middle and bottom have swayed. 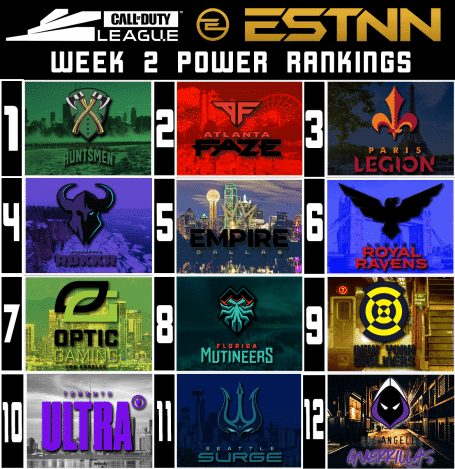 After two weeks of play, the Chicago Huntsmen and the Atlanta FaZe remain at the top.

The Huntsmen showed up in London and proved that Launch Weekend was not a fluke. Chicago continued right where they left off on Launch Weekend, starting with a quick sweep of the Los Angeles Guerillas. Their overall dominance as a team is evident in the stat sheets. Every single player on this team is capable of going off at any given moment. There are no weak links on this Chicago squad. The addition of x2Pac ThuGLorD as an S&D coach has done wonders. His impact has been visible, Chicago performed at a much higher level in S&D on Launch Weekend.

To top it off, Scump, a player not known for his S&D prowess, had the best overall K/D ratio in S&D of any player in the entire event. Search and Destroy looked to be the one weak spot of this squad but after Week 2, Chicago seems to have nipped that in the bud quickly.

Chicago convincingly beat its rivals, the Dallas Empire twice in London; once in group play and once in the Grand Finals. This brings their total record against them to 3-0. Overall, Chicago is now 6-0 in the CDL. This kind of performance after two weeks of play firmly plants them at the top of the power rankings.

FaZe as a close second

After seeing what Chicago did in London, the Atlanta FaZe appears to be the only team currently capable of stopping this Huntsmen run. FaZe dropped a single map on Launch Weekend and looked unbeatable. Unfortunately, Atlanta had a Week Two bye, robbing us of witnessing a potential showdown with Chicago.

These two teams are interchangeable for now. Chicago gets a slight edge, solely due to their London Homestand Championship. It appears that these are the teams to beat. CDL Week Three will give us a chance to see these two face off for the crown.

The Paris Legion continues to prove the doubters wrong. The Legion was ranked among the bottom teams heading into the season. After going undefeated on Launch Weekend, many thought that Week 2 in London would result in a return to earth for Paris. They were wrong.

It was a rough start for Paris. We saw the winless Subliners claim their first win, 3-1, over the Legion. Paris did not let this phase them though. The Legion came out on Sunday and pounced the Toronto Ultra 3-1. In their next match, a rematch with the Subliners, Paris claimed revenge, sweeping them 3-0. The weekend ended for the Legion with a Semifinals loss to the Huntsmen. Despite the loss, Paris can walk away knowing that they played the Huntsmen as close as any team thus far. The Legion has been the only team to take two maps off the Huntsmen. This secures their spot as the third team on our power rankings.

Next, we have the Minnesota RØKKR. Minnesota was another team not in attendance at the London homestand. The RØKKR earned their place at the number four spot thanks to their undefeated weekend at home on Launch Weekend. They had strong wins against the LA Guerillas and the Toronto Ultra. The RØKKR looks to be one of the better teams in the CDL. How they perform in Week Three against some of the stronger teams will determine if they rise or fall in the power rankings.

At five we have the Dallas Empire. The Empire received a lot of flack after Launch Weekend. They went 0-2 despite looking like the best team in the pre-season. Dallas responded with a solid performance in London that carried them to the Grand Finals. Unfortunately for Dallas, they were once again beaten by the Huntsmen, their third loss to this team already. Dallas showed that they can win matches. They beat the Seattle Surge twice and reverse swept the London Royal Ravens to earn their spot in the Grand Finals. It is clear that the Empire can beat the middle-of-the-pack teams. It is yet to be seen if Dallas and it’s younger players can get over the hump and prove worthy competition to teams like Atlanta and Chicago. 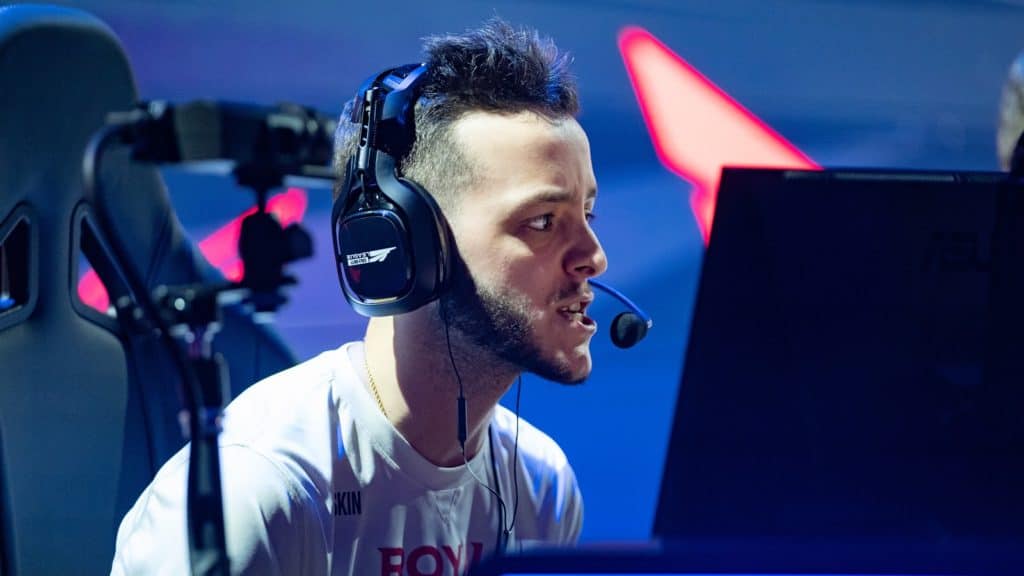 Right in the middle, we have the London Royal Ravens. The inconsistency the Royal Ravens displayed on Launch Weekend carried over to their homestand. After taking care of the Ultra in their first match at home, London edged by New York 3-2. It was an impressive comeback victory. London went down 0-2 early but with the crowd behind them, was able to reverse sweep and claim a spot in the Semifinals. Then, against Dallas, London went up 2-0 and ended up choking away their chance at a Grand Finals match vs. the Huntsmen. This team has massive potential but their inconsistency is hurting them. One part of their team that is consistent is wuskin. wuskin left Launch Weekend with the #1 overall K/D ratio. This week at home, he stayed hot, finishing with a 1.35 K/D, the second-highest of the weekend.

OpTic Gaming Los Angeles earned the number seven spot solely due to their potential. After finishing 0-2 on Launch Weekend, OGLA did not get a chance to redeem themselves in London. All we have to go off of is their 2-3 loss to Paris and their crushing 0-3 loss to Chicago. We now know that Paris and Chicago are both top teams. This talented roster is poised to make noise in this league. They sit above other teams for now until we see how they match-up vs. the rest of the competition.

The Florida Mutineers looked extremely average on Launch Weekend. Finishing 5-5, they did everything good but not great. They took a win off the Surge and fell to the Guerillas. Both of these matches were tightly contested and could have gone either way. The Mutineers missed out on Week Two in London. We will need to see them perform against some of the higher ranking teams before we can move them up in the rankings

At nine, it’s the New York Subliners. In London, the Subliners bounced back from an embarrassing Launch Weekend that saw them win a single map. They started Week Two off strong with a 3-1 victory vs. the soaring Paris Legion. The Subliners looked like they were going to continue their domination when they went up 2-0 on the home team, the London Royal Ravens.

As it turns out, the Ravens came back and won 3-2 in a reverse sweep. The heart-breaking loss may have had an impact on the Subliners players. The next day saw them get swept 3-0 by the Legion, a team they had just beaten easily the day before. This loss knocked them out of the tournament and has the Subliner team questioning what went wrong. We will need to see more performances like that first game vs. the Legion if the Subliners want to be seen as serious contenders.

Next up is the Toronto Ultra. The Ultra went 1-1 on Launch Weekend but as a whole, looked entirely average. Their one win was a tight match against the Seattle Surge, a team we now know belongs near the bottom of the rankings. In London, Toronto was sent home swiftly. They played two matches and lost them both. Both European teams made quick work of the Ultra 3-1. This team is struggling right now.

The Seattle Surge has a stacked roster that just can’t win games. They continue to lose close matches in the final minutes/rounds. Seattle’s performances in Search and Destroy are ruining them. Through two weeks of play, the Surge has won a single map of S&D and that was a 6-5 victory over the lowly Guerrillas. If the Surge can’t turn it around in S&D they are going to have a long season ahead of them. Seattle’s performance in respawn leaves room for hope. The Surge is led by Octane, one of the league’s best overall players. Despite Seattle’s struggles, Octane led all players with a 1.42 K/D ratio over Week Two.

The LA Guerillas round out the list at #12. We ranked the Guerillas relatively high after Launch Weekend. They debatably should have beat Minnesota had they not been forfeited for an illegal perk. Then, they beat a very respectable roster in the Florida Mutineers. While these bottom three teams could arguably be interchangeable, the Guerrillas earn our bottom spot for a few reasons. One, they were reverse swept by the Surge this past weekend in London. Two, Chicago made quick work of them 3-0, proving that the Guerrillas are not quite ready to hang with the top teams. Lastly, a couple of their players are really struggling and talks of substitutions are already swirling in the community. CoD legend ACHES as well as his teammate, Lacefield, are fighting to go positive almost every game. This LA team may be one of the first to make roster moves this CDL season.

There you have it for our ESTNN CDL Week Two Power Rankings. Tune in here at ESTNN each week for our updated power rankings, match recaps and more.