The North American tier two tournament, which will commence with open qualifiers on November 5th, features a $25,000 (~£18,108) prize pool. 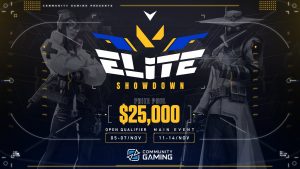 In total 32 teams from the open qualifiers will advance to the main event. These teams will compete against 32 invited teams which include Andbox, T1, NRG, Immortals, Complexity, Renegades and C9 White.

The main event will take place on November 11th, with teams competing through a GSL Groups format into a single-elimination bracket. The tournament’s winner receives $10,000 (£7,243) of the prize pool.

According to the release, the entire event will also be live-streamed on VALORANT’s official twitch channel. Esports commentators Daniel ‘ddk’ Kapadia, Christy ‘Ender’ Frierson and Alex “Vansilli” Nguyen, among others, have already been announced for the broadcasts.

“From piloting an agent ban phase in the Valorant Weekly Contenders Circuit to organising local LANs at BrookLAN with Andbox, Community Gaming continues to spearhead the growth of VALORANT esports at a foundational level.”

Outside of VALORANT, Community Gaming recently partnered with Moonton for a Mobile Legends: Bang Bang LATAM series. Moreover, the company received $2.3m (~£1.67m) in seed funding earlier in the year.

Esports Insider says: Creating higher profile tier two tournaments will undoubtedly help boost North America’s VALORANT ecosystem as it provides teams with greater opportunities. Despite its impressive growth, VALORANT’s esports scene is still in its infancy and so it’ll be interesting to see the event’s viewership and whether the tournament attracts any commercial partners.