Yan “Wei” Yang Wei, the jungle player for Chinese League of Legends Pro League (LPL) team eStar Gaming, has had his wages deducted this month for making an in-game error. In their season-opening game against Bilibili Gaming, Wei forgot to take the summoner spell Smite, which is a critical spell for any team’s game plan in League of Legends. So eStar management acted decisively, withholding the player’s salary for one month.

Most of us are probably familiar with the sinking feeling of not remembering to pick the appropriate summoner spell for your role or champion. That goes double for jungle players, who are at a severe disadvantage if they don’t take Smite. The spell is an essential part of taking Dragon and Baron buffs as well as other neutral monsters, meaning the whole team can suffer when it’s absent.

However, not many of us can claim to have made such a (literally) costly mistake in a professional, livestreamed game.

In the official team statement posted on Twitter, eStar explained the story and the reasoning behind its actions. Apparently, Wei had been playing Solo Queue with his teammates before the game. Clearly he wasn’t assigned his usual jungle role and so switched Smite to Ignite. He then forgot to change this back before picking his champion and entering the professional LPL match.

The issue was reported to game admins; however, it was decided that the match would continue as planned. As a result, eStar decided: “Management will deduct the salary of Wei this month, and conduct team criticisms to prevent such mistakes.”

The statement also singled out an issue with the tournament client that is being used at the moment: “Teammates cannot check the summoner spells of other players before entering the game screen.”

[Official Announcement of the Penalty] #LPL 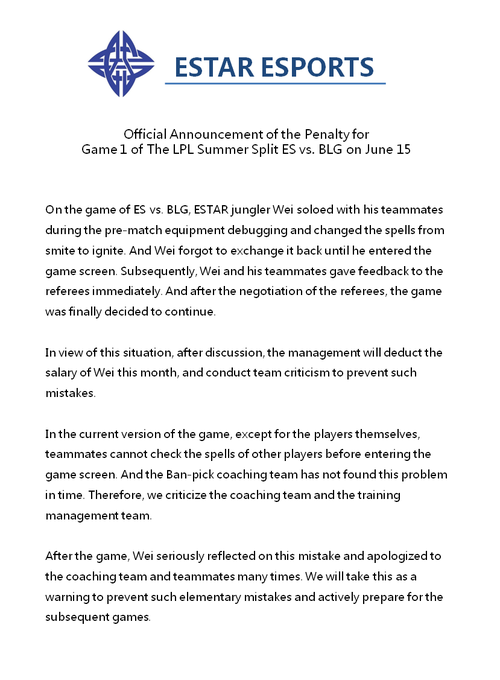 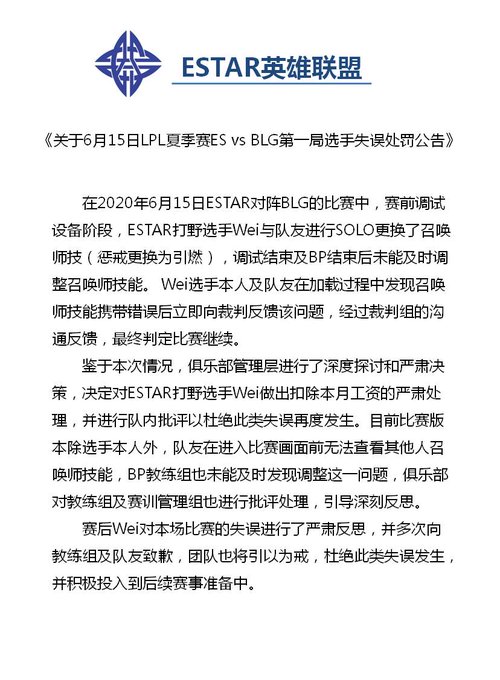 The organization stopped short of criticizing Riot Games for the situation, as LPL games are currently being played online due to the ongoing COVID-19 coronavirus pandemic. Their own pick-ban and coaching teams did, however, take heat for “not finding the problem in time.”

EStar’s statement finished with a promise that Wei had “seriously reflected on this mistake and apologized many times to the coaching team and teammates.” Exactly how much this will cost the young LPL player is unclear.

Seventeen-year-old jungler Wei joined eStar Gaming in January 2020.  He helped them reach the Spring Split playoffs where they went down 1-3 against World Elite in the first round.