In an immersive and spectacular spectacle, Fortnite players witnessed one of Epic Games’ biggest events yet. On Thursday evening, multi-platinum rapper Travis Scott held his “Astronomical” concert for Fortnite players everywhere, premiering his brand new track “The Scotts.” Fans can catch the “other-worldly” experience from April 23 – 25.

The 10-minute concert was an exciting light show, featuring a giant holographic Travis Scott. The show began at 7:05 p.m. EST on April 23 with “SICKO MODE” as the introduction song. Players all over the area gathered to view the light show as a giant speaker blew up and blasted everyone far from the stage. Right after, Travis appeared to perform. Players were able to walk around while viewing the neon visual effects on the sky.

Players were then able to jump and float around as if on a trampoline. As the sky turned from light blue to pink, Travis grabbed two stars from the sky and smacked them together, instantly blasting everyone into a different scene. Then the next song, “Stargazing,” began. 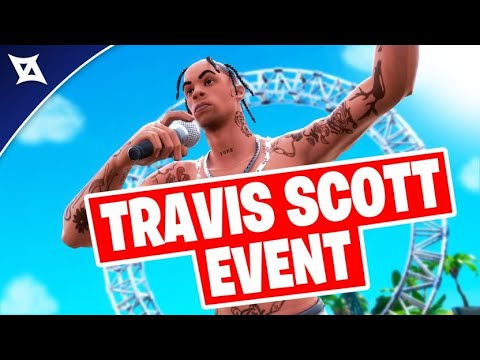 The rest of the concert allowed the player to immerse themselves as an intergalactic traveler, a diver, and more. From neon skeletal suits to giant neon jellyfish, this concert had players teleporting from one scene to another.

Everyone will be able to get a chance to watch the vibrant show between now and April 25. The remaining showtimes go as follows:

Here is the full tracklist of the songs played during the event:

Plenty of popular streamers such as Imane “Pokimane” Anys, Tyler “Ninja” Blevins, Ali “Myth” Kabbani, and more watched the concert. Pokimane said the concert is “the best in-game event yet.” Myth, on the other hand, gave everyone a clip of their excitement during the show.

my recording might as well have been a 5 minute tik tok tho, i was lip-syncing the whole thing LOL

Here’s a moment from the Travis Scott event if yall missed it… INSANE.

Soon after the event ended, the show became popular on Twitter, grabbing followers’ attention. Additionally, Travis Scott tweeted a response to his performance, showing appreciation and excitement over the premiere.

HONESTLY TODAY WAS ONE OF THE MOST INSPIRING DAYS. LOVE EVERY SINGLE ONE OF U GUYS. AND I KNOW TIMES ARE WEIRD FOR US. BUT FOR ONE MOMENT TO BE ABLE TO HAVE THE RAGERS TO RAGE WHERE EVER YOU ARE IS AMAZING. LOVE U GUYS WITH ALL MY BODY. !!!!! GANG

Epic Games recently introduced Travis Scott as the newest addition to the Icon Series. Players are able to receive outfits, emotes, and more. Additionally, those who attend the concert can receive the Astroworld Cyclone Glider and two loading screens for free.

Did you get a chance to view the Fortnite Astronomical concert? Let us know what you think in the comments! Remember to stick around Daily Esports for more esports and gaming news.