The second day of the LCS Week Three is over after four great games. The meta is continuing to develop, with some new picks rearing their heads today. Meanwhile, some teams are playing exceptionally well, though others are faltering and underperforming. It’s been an interesting season so far, so remember to never miss a beat of LCS action! The Immortals (“IMT”) kicked off the day with a devastating win over 100 Thieves (“100T”). As opposed to some other games, IMT looked very coordinated and snowballed their leads efficiently. Their first leads came in the top lane. Here, Xmithie ganked Ssumday and killed him for First Blood. He re-ganked a few minutes later and killed him again. Though Xmithie did kind of donate a kill over to 100T, the IMT squad recovered quickly with a number of picks onto 100T members and multiple objective takes, some of which were the Rift Herald and First Tower bonus.

Rolling into the mid-game, 100T struggled to find any footing. Their members continued to get caught out of position while IMT ran the map and cleaned up towers. It wasn’t long until IMT found a two-for-zero team fight in 100T’s jungle and secured a Baron buff for themselves. This buff crippled 100T badly. In a matter of minutes, 100T had lost two Inhibitors and were completely choked out of vision. But they couldn’t finish 100T off, as they managed to kill Soaz and Hakuho for being a bit too far forward.

Because of this, IMT regrouped and went towards dragon. They claimed their fourth one of the game, which netted them the Infernal Dragon Soul. This made it exceptionally easy for them when the next team fight broke out. At this point, IMT cut down three 100T members in the blink of an eye and secured a second Baron buff. Against little opposition, IMT took this chance to push into their opponents’ base and lay siege to their Nexus. Team SoloMid (“TSM”) kept their hot streak going with a win over the Golden Guardians (“GG”). It was the Broken Blade show for much of this match too, who piloted Qiyana top to great success. Dardoch and Bjergsen helped him dive Hauntzer under his tower and get him First Blood, and from there he became a menace. Though GG had a decent early game objective-wise, getting the Rift Herald, First Tower bonus and a Cloud Dragon, they couldn’t translate it to firepower. This was clear at 13 minutes when a team fight in the river went two-for-zero in TSM’s favor.

In the mid-game, TSM began to push DIG further and further back. Broken Blade and Dardoch killed Hauntzer a few times in the side lane, then won team fights whenever they grouped. GG did pick off Broken Blade at one point and got the third dragon, but they never were able to get the Soul. But TSM’s side lane pressure was strong, permitting the squad to destroy multiple towers during this period. But TSM broke open the game at 27 minutes when they won a team fight four-for-zero, then went and secured the Baron.

Empowered with the major buff, TSM set to work. They pushed down multiple towers quickly and established map control. At 32 minutes, Broken Blade killed Hauntzer, giving his team a 4v5 power play. but TSM still couldn’t crack an Inhibitor. But, at 34 minutes, a team fight erupted in the GG jungle. TSM slaughtered four GG champions before running into their base and smashing their Nexus. 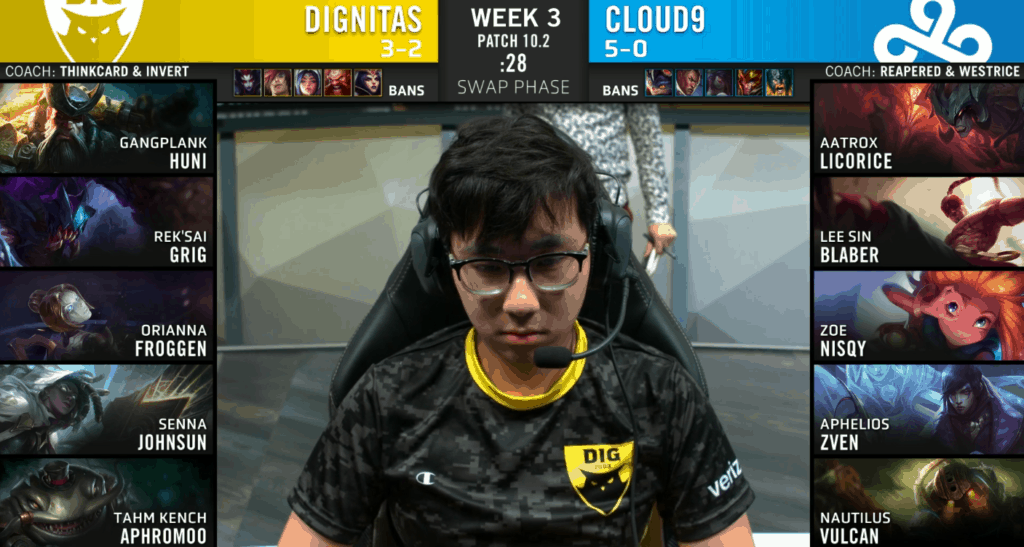 Another game, another easy win for Cloud9 (“C9”), this time over Dignitas (“DIG”). Like their previous six games, they never gave their opponents a chance to make any plays. They obtained First Blood onto Grig when the mid-jungle duo from C9 collapsed on him in the river. Next, C9 slew a Mountain Dragon and picked off the DIG support Aphromoo. After that, DIG attempted to make a play onto the Rift Herald, but C9 inevitably responded. Here, C9 stole the objective away and got a kill to boot. This gave them an influx of gold by crushing a number of mid lane tower plates.

The top NA squad didn’t take their foot off of the pedal an inch. They sent multiple members top to kill Huni then secure the First Tower bonus there. Throughout the game, C9 accumulated a bunch of dragons too. As a result, the Infernal Dragon Soul was granted to C9 at an early 23 minutes. With this huge damage buff on the already massively ahead team, C9 had no problems setting up the Baron. When they started it up, DIG tried to test the waters and see if they could contest, but C9 instantly pounced. They killed two and grabbed the buff too.

The buff gave C9 even more power to break DIG’s base. Their middle and bottom Inhibitors fell after a bit of a siege. At that point, the Elder Dragon spawned, which C9 also took with no contest before rotating top. They demolished the last two towers there before flying into DIG’s base and forcing a fight. To no one’s surprise, C9 decimated all five DIG members and did the same to their Nexus. The Evil Geniuses (“EG”) bounced back after their loss yesterday with a convincing win over FlyQuest (“FLY”). Svenskeren was a monster this game, setting up plays over and over to get his team significant leads. First, he set up a tower dive bot lane to get First Blood for Jiizuke but had to trade his life for it. He visited there again soon after to dive and kill Ignar. If FLY’s bottom lane wasn’t feeling the heat yet, EG made sure they did by four-man diving bottom once more and killing Wildturtle.

Even with these losses, FLY did manage to kill two of EG’s members at the Herald, though they lost Shelly to EG. At 13 minutes, EG sent three mid to kill PowerOfEvil and use the Herald to secure the First Tower bonus. Now that the map was open, EG had an easier time of moving across the map to make more plays. They started winning skirmishes back-to-back and accumulating dragons. At 19 minutes, EG won a skirmish top two-for-zero. These two members were still on death timer when the Baron spawned, so EG burned that down as soon as it did.

This first Baron didn’t accomplish too much overall besides a couple of towers. A team fight worried EG, as FLY almost went even in a team fight, but went 2-3 to EG. At 27 minutes, EG secured their fourth dragon and the Infernal Soul. This made it easy for them to pick off Santorin with the Malzahar ultimate and claim the second Baron. With this, EG marched into the base through two lanes, initiated one last team fight and killed four FLY champions. EG finished the game off with a triumphant Nexus kill.

Watch the LCS here at ESTNN TV. For more information on the tournament, teams, standings, and players, visit www.lolesports.com. Stay tuned here at ESTNN and follow us on Twitter and Facebook for more League of Legends news, articles, opinions and more.