The surprises and upsets continue well into the second week of the LCS. Fans are starting to get a clearer of who’s on top of the region and who’s on the bottom. The standings are still quite exciting though, so this week will mean a lot for the momentum of many teams moving forward! 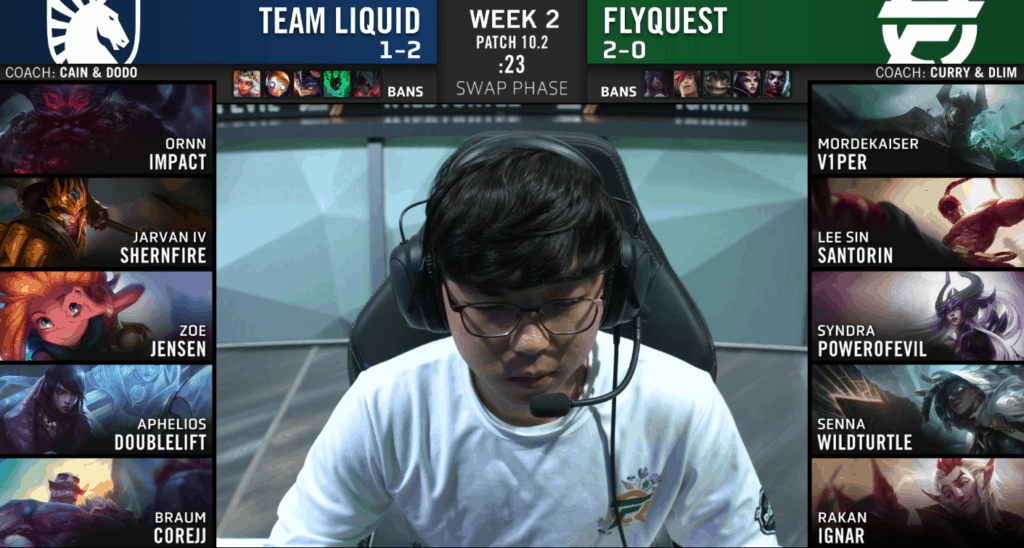 Due to their previous games, many doubted Team Liquid (“TL”), but they showed their still a serious contender by cleanly dismantling FlyQuest (“FLY”). Shernfire, despite being a substitute, had a strong game overall. He secured an early Mountain Dragon at six minutes and a Rift Herald slightly after. His team then moved top together, where V1per’s Mordekaiser ripped Doublelift’s Aphelios into the Death Realm. Doublelift eviscerated him and picked up First Blood, which set up his team to grab another kill, use the Herald top and take the First Tower bonus too.

With this early lead, TL suffocated FLY moving forward. They rotated around the map perfectly to knock down towers and pick up a second dragon. At 16 minutes, TL shifted for their second Herald, but FLY showed up to contest it. It was a terrible decision, as TL engaged on them and won the ensuing fight three-for-one. This led to the Rift Herald going down as well as FLY’s middle tower. Afterward, TL pushed their lead farther, cleaning up more dragons and towers along the way.

Because of this, it wasn’t long before TL secured four dragons and the Cloud Soul. At this point, TL started to make moves for the Baron. Their first attempt was sullied by FLY, but TL still won the fight two-for-one. But TL went right back to it, rushing it down and claiming its buff before killing four in the team fight after. Instantly, TL rushed mid to demolish the Inhibitor and a Nexus tower, but couldn’t quite end yet. They had no reason to worry though, as they caught out two FLY members on their returning push then easily walked in the FLY base and smashed their Nexus. 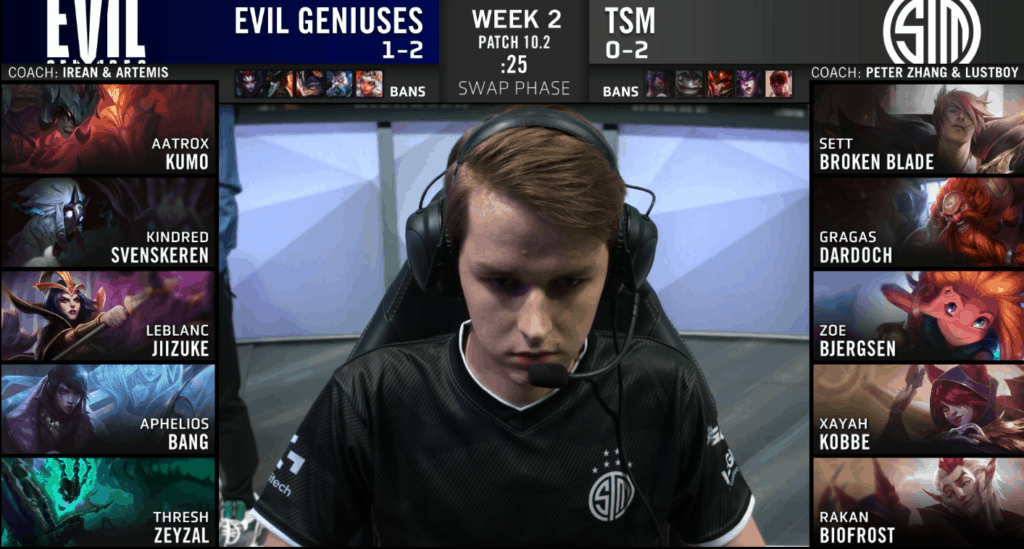 So far, it seemed like a rebound day for certain iconic NA teams, as Team SoloMid (“TSM”) won their first game of the split over Evil Geniuses (“EG”). Though they did get the W, it wasn’t easy. TSM’s early game was good, as they got First Blood by tower diving Kumo top and won a team fight at Herald two-for-zero. But EG charted their own course, where they focused objectives and gained leads through dragons, Heralds and tower plates. In addition, they won a fight of their own two-for-zero and claimed the First Tower bonus top.

As the mid game rolled around, EG picked up the pace. They dragged TSM around the map and found some key picks. Interestingly, EG rushed the Baron and secured it for free, since TSM dropped the ball in regards to their vision and priority. With this, EG appeared that they would be able to break into TSM’s base. They did clean up some towers but went even in some skirmishes with TSM, which stopped their siege in its tracks.

The game stalled for some minutes as the teams found their footing, but TSM made three crucial plays. First, they pulled off a three-for-two team fight victory in the middle lane. After that, Dardoch stole EG’s potential fourth dragon, which denied them the Soul. After that, TSM moved to the Baron. Here, they killed two EG members in a team fight, secured the Baron buff, then caught out Jiizuke after that. Now in the driver’s seat, TSM was able to fairly easily push with the empowered minions and take the top Inhibitor. After they caught out Svenskeren, it was easy for TSM to win the 4v5 team fight and destroy the enemy Nexus. 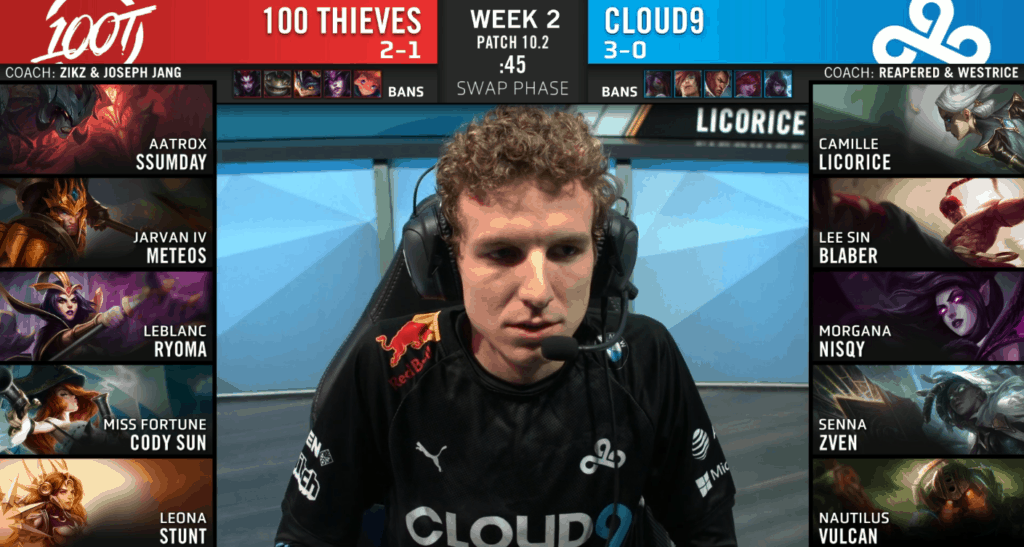 Cloud9 (“C9”) continued their domination of the LCS with yet another victory, this time over 100 Thieves (“100T”). Their gameplay is as crisp as ever, gaining early game leads and carrying them through straight to the Nexus. Their first lead came from a bottom lane 3v3, where Vulcan killed Meteos for First Blood and slew a Mountain Dragon. 100T attempted to take the Herald at eight minutes, and though they got the eye, they lost the fight one-for-two in kills.

Shortly after this, C9 did stumble a bit. 100T punished a top lane play to get two kills, knocked down some tower plates and found a pick onto Blaber. But that was only a temporary setback, as C9 killed both Ssumday and Stunt before taking the second Herald and the First Tower bonus. From this point, C9 kept up the pressure and translated kills into tower demolitions. Their lead was growing every minute and 100T had almost no way back into the game because C9 was so measured in every action.

All the while, C9 had accumulated a decent collection of dragons which, at 29 minutes, allowed them to obtain the Cloud Soul. It only took the C9 squad a minute to find another team fight, and with their new buff, easily killed two from 100T before claiming the Baron buff. They went back to base, and upon their siege in the middle lane, forced one last fight. It wasn’t close. 100T lost two members quickly while failing to kill any C9 champions. As a result, even their desperate attempts at defense weren’t enough, and they were made to watch as C9 crushed their Nexus. 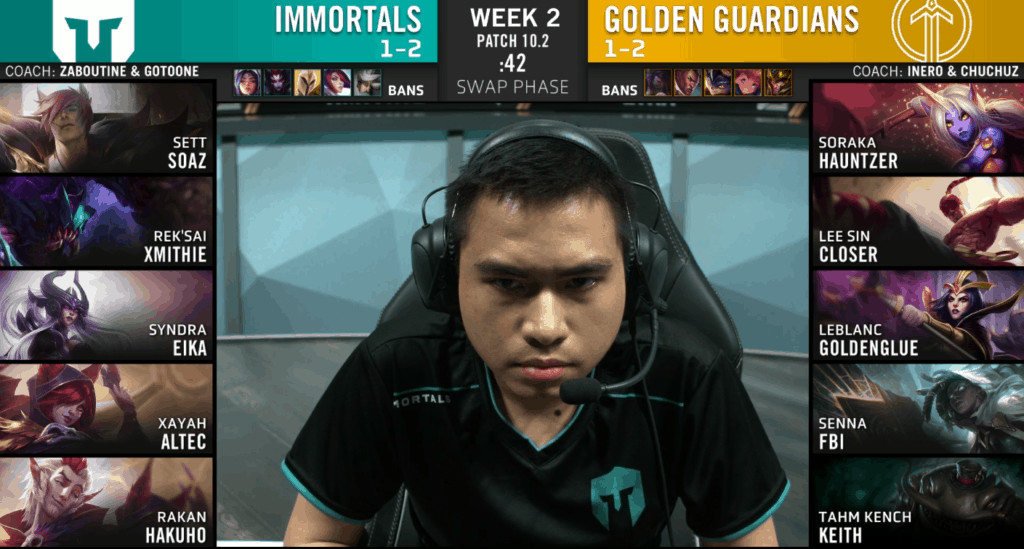 The fourth and final match of the day was a curious one, as Immortals (“IMT”) beat down the Golden Guardians (“GG”) who drafted the arguably worst composition we’ve seen in the LCS so far. GG drafted almost no playmaking and very little consistent damage, which IMT punished ruthlessly. In the early game, it wasn’t such a huge problem though. GG did manage to send multiple members mid and get First Blood on Eika for Closer. But it soon fell apart. Keith, in particular, was caught out a lot, which first led to IMT taking the Herald. This Herald allowed IMT to secure the First Tower bonus too.

After this, IMT turned up the tempo. Their first target was Goldenglue, who they picked off before winning a team fight two-for-zero. Right after that, IMT killed their third Ocean Dragon and set themselves up for an Ocean Soul. GG did catch out Xmithie to buy some time, but it wasn’t all that impactful. The game-breaking fight came at 26 minutes when IMT engaged another team fight in the middle lane. Here, they ran through the GG lineup and killed three with no casualties. This allowed IMT to claim the Baron at the expense of their Ocean Soul since GG took it while preoccupied with the purple worm.

Equipped with the powerful buff, IMT systematically demolished GG’s base. With no wave clear and no reliable engage, GG essentially had to sit back and watch as one, two, three Inhibitors crumbled to dust. All it took was one fight for IMT to kill three before they smashed the last two towers and lastly GG’s Nexus.

Watch the LCS here at ESTNN TV. For more information on the tournament, teams, standings, and players, visit www.lolesports.com. Stay tuned here at ESTNN and follow us on Twitter and Facebook for more League of Legends news, articles, opinions and more.