Peripherals brand Logitech G has been announced as the latest partner of the eNASCAR Coca-Cola iRacing Series.

As a result of the partnership, the brand’s Logitech G 923 product will be the sim racing series’ official wheel and pedal. 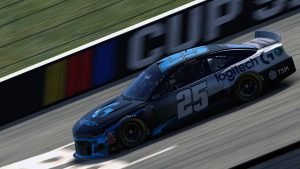 In addition, eNASCAR’s Coca-Cola iRacing Series event at the virtual Michigan International Speedway on August 17th will now be called the Logitech G Challenge 100. The peripherals brand will look to use this event to promote its annual G Challenge event, which is currently in its qualifying stages.

Nick Rend, Managing Director of Gaming and Esports at NASCAR, commented: “Logitech has for many years been an ardent supporter of sim racing, and they have played a major role in elevating the profile of the eNASCAR Coca-Cola iRacing Series.

“We’re excited to help them take a deeper dive into the world of eNASCAR as they continue to innovate around how partners activate in the sim racing space.”

In addition to eNASCAR, Logitech G has secured a range of sim racing partnerships over the past 12 months. The peripherals firm is currently the title sponsor William Bryon eSports, which fields two cars in the Coca-Cola iRacing Series. Moreover, the firm has established relationships with the likes of Formula 1 team McLaren and driver Lando Norris.

Regarding the partnership, Jim Hoey, Global Head of G Challenge at Logitech G, added: “We’re excited to team up with eNASCAR to upgrade the driving experience for the remainder of the 2021 season.

“Our TRUEFORCE technology taps into the physics of iracing providing a super realistic racing experience, and we know the drivers are going to love it.”

Esports Insider says: Partnerships like this continue to highlight the growth of sim racing over the last two years. eNASCAR has secured a highly reputable partner which should bolster its commercial portfolio. Meanwhile, Logitech G will use eNASCAR’s series to promote its other sim racing activities.