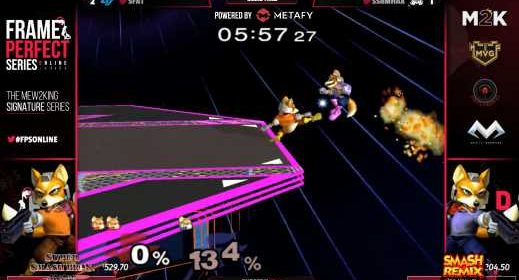 SFAT swept through his pool unopposed, with 2-0 wins over Jose “Panda” Escobar Rodriguez and Dylan “Dawson” Dougherty. However, he began to face tougher opponents as he proceeded to top 8, and he started to drop games as a result. In the first round of top 32, SFAT beat Forrest Griffin 2-1.

Then, SFAT earned another 2-1 victory against “DontTestMe,” the moniker used by Zain Naghmi for his secondary Roy. Once in top 8, none of SFAT’s opponents could push him to game five. He defeated Aziz “Hax” Al-Yami 3-1 and Dawud “Aklo” Rahman 3-1. SFAT beat Hax 3-1 again in Grand Finals to win Melee Singles at Frame Perfect Series 4: Online.

Hax made an impressive run to 2nd place at Frame Perfect Series 4: Online Super Smash Bros. Melee Singles. He cruised into top 8 with 2-0 wins against Rishi Malhotra’s Donkey Kong and Jason “Gahtzu” Diehl. After dropping a set to SFAT, he then made a solid run through the losers bracket. Hax eliminated Juan “Hungrybox” DeBiedma 3-1, Gahtzu 3-1, and Aklo 3-2.