Like clockwork, TCL — the Huizhou, China-based tech company behind BlackBerry-, Alcatel-, and Palm-licensed devices, as well as a range of first-party smartphones — announced a slew of products ahead of a press conference at the 2020 Consumer Electronics Show. Among the headliners are the 10-Series, which includes the 10 5G — TCL’s first 5G smartphone — as well as a notebook-style foldable tablet concept.

No doubt perceiving that foldables are having a moment, TCL previewed a device that folds 180 degrees inward, not unlike the Samsung Galaxy Fold. It’s not the company’s first rodeo — it previewed a clamshell concept at IFA 2019 and a zigzag-shaped phone last October — but it’s perhaps the closest to a fully functional foldable we’ve seen from TCL. The last time the company demoed this particular model, it declined to let members of the press fold it themselves.

The tablet — which could make its way to stores as early as mid-2020 — clearly remains in the prototype phase, as evidenced by a bug that dims the 7.2-inch 2K (2048 x 1536) AMOLED screen beyond what can be seen. It doesn’t have a price tag or a release date, and — annoyingly — the tablet’s flash-illuminating flashlight mode toggles on seemingly at random.

That said, the no-name foldable’s hinges seemed sturdy in the time we toyed with it — they hold position at any angle and can withstand up to 200,000 screen folds — as did the frame housing the stereo speakers, volume rocker, and power button. In another plus, the display is truly gapless in the sense that the top and bottom portion meet when folded shut, an improvement upon earlier versions that didn’t close completely.

Specs were hard to come by at press time, but four cameras round out the foldable’s top right corner, one of which is a 48MP sensor (2.9-micron pixel size) with a macro lens and a focal length equivalent to 1:18-2.4 12-26 millimeters. The device’s 3D holographic finish might well have been inspired by an Elyse Dodge painting, and its thick display bezel conceals the hinge mechanism within. (Fun fact: TCL says the glass cover’s angular diamond pattern was created with a novel technique dubbed thermal vacuum casting.)

Mum’s the word about the software, but it appeared to be a bone-stock Android experience — which is to say that apps filled the whole screen in landscape and portrait modes. In multitasking mode, up to two apps occupied either side of the crease, adhering to the behavior established by Android’s continuity-related APIs. 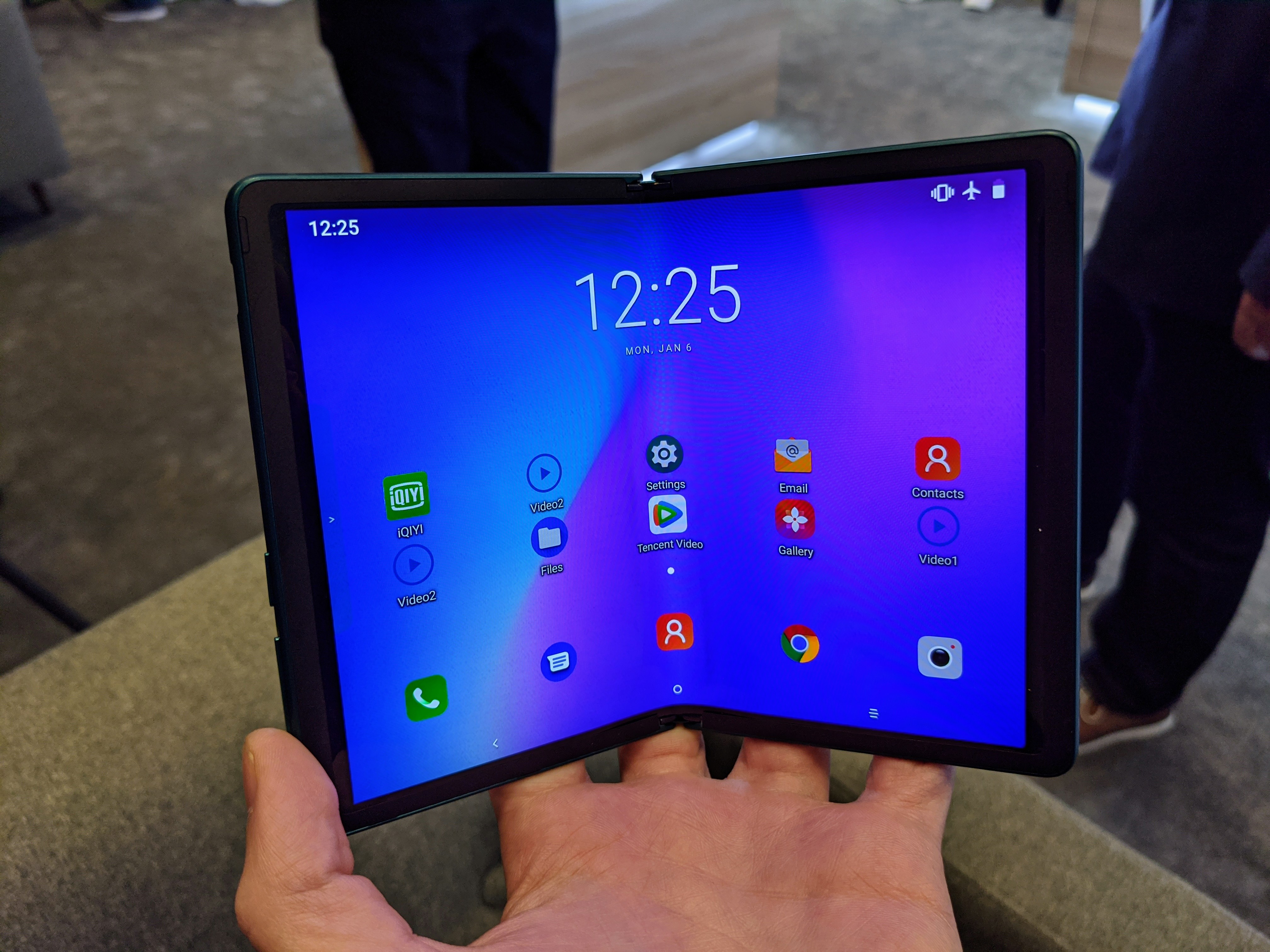 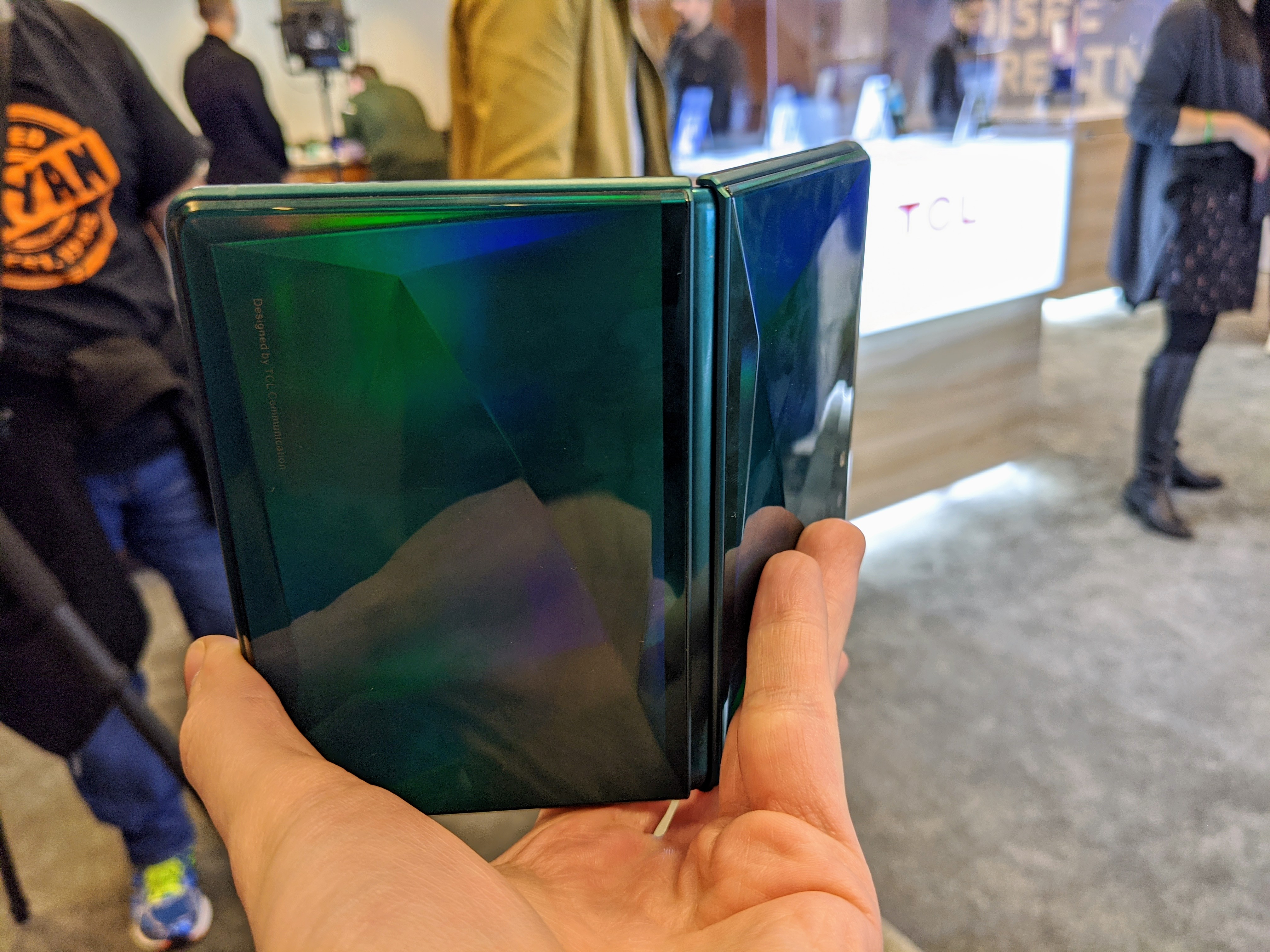 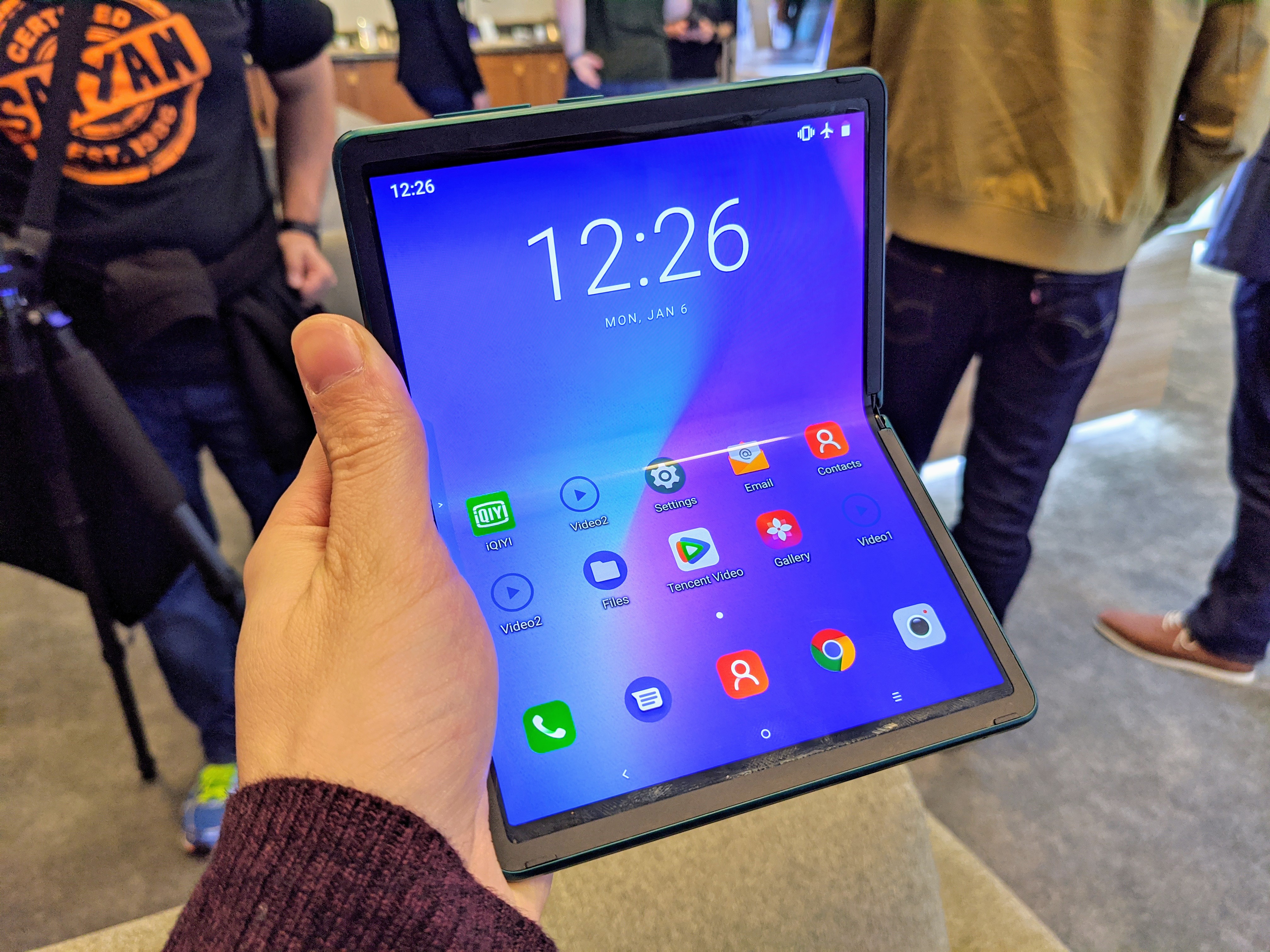 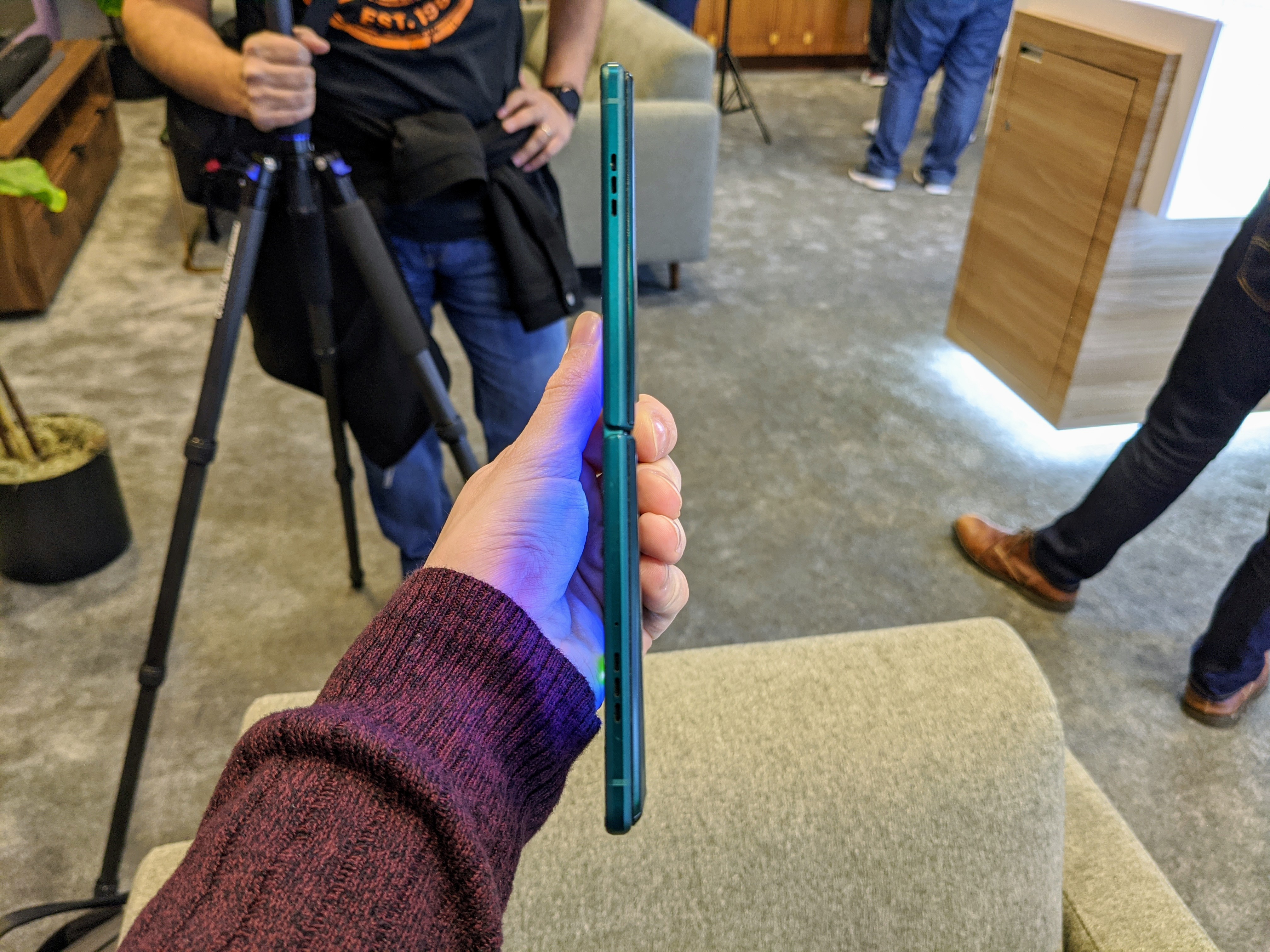 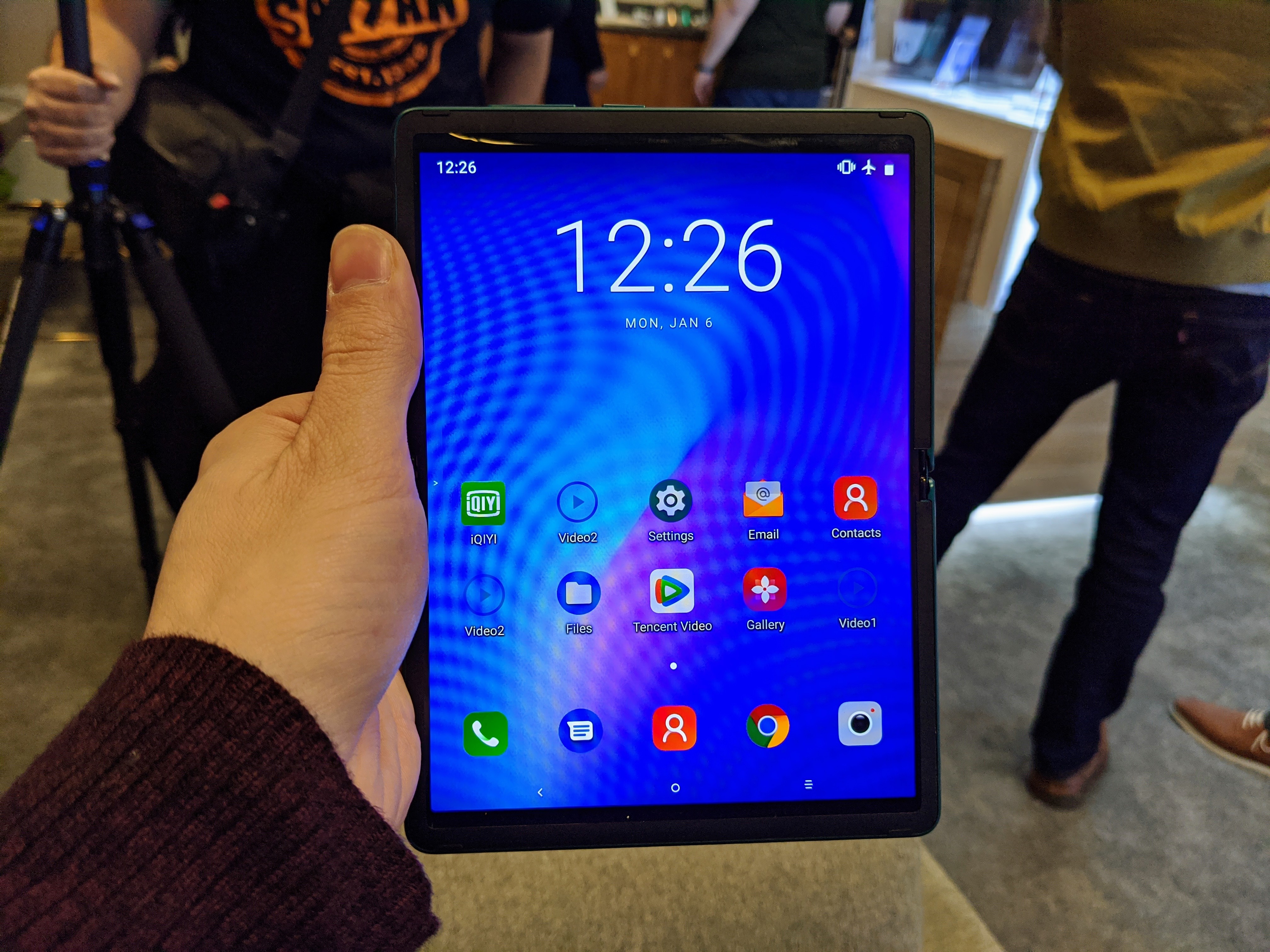 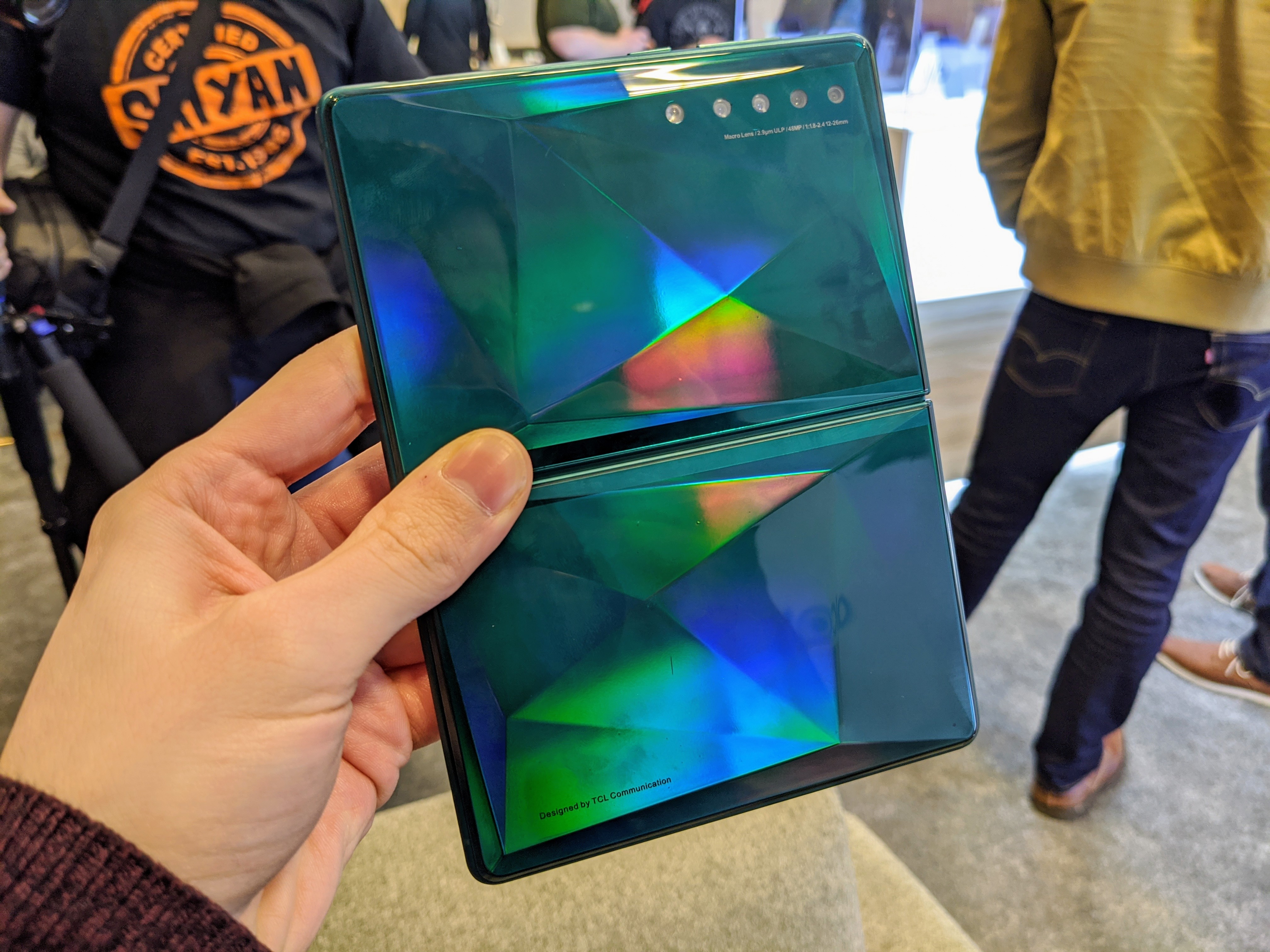 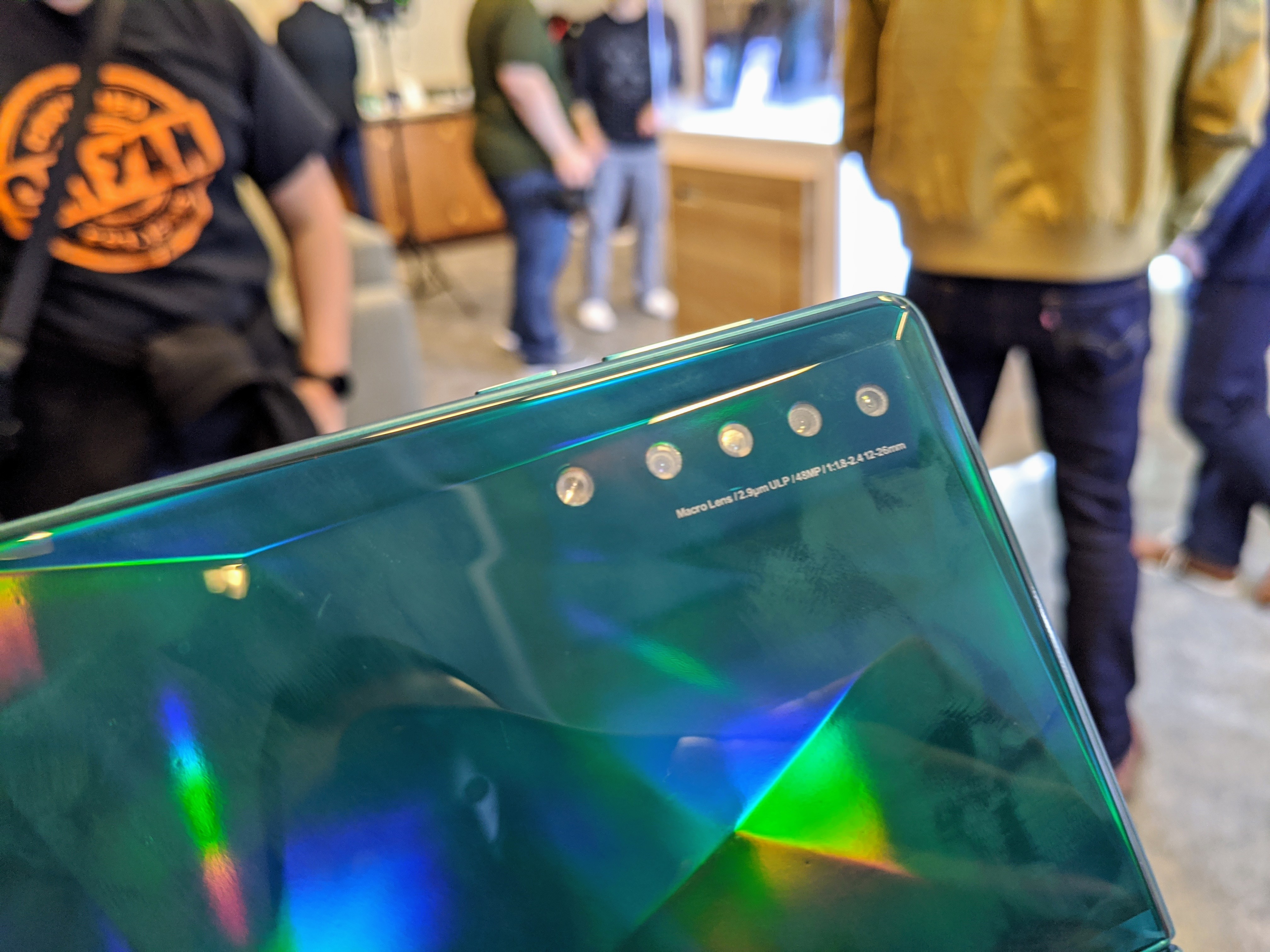 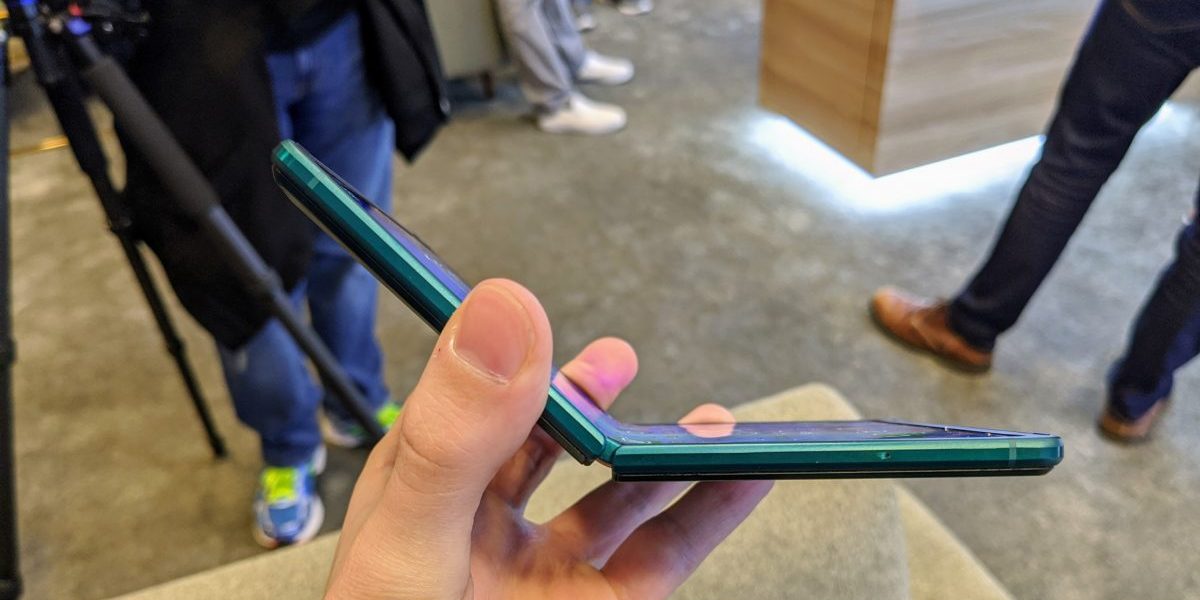 All that said, I can’t shake the feeling Samsung and Huawei beat TCL to the punch with respect to the notebook form factor. Despite the Galaxy Fold’s teething problems, it’s back on store shelves with a more robust design. And Huawei’s Mate X, which was admittedly delayed, began shipping to customers last November.

TCL’s aforementioned DragonHinge and Butterfly Hinge are arguably more intriguing (albeit less practical). By way of refresher, DragonHinge is a 0-180 degree fully inward foldable AMOLED display framed by flexible metal joints, with software that automatically expands and switches between apps. As for Butterfly Hinge, its two-hinge design creates an accordion-like shape as it’s closed.

Clearly, TCL isn’t putting all of its eggs in one foldable basket. Time will tell whether that strategy pays off.

Aside from the foldable tablet concept, TCL took the wraps off three new flagship smartphones priced under $500: The 10L, 10 Pro, and 10 5G. Detailed info is forthcoming — the company plans to reveal more at Mobile World Congress on February 22 — but all three feature rear quad-camera arrays (with 64MP primary sensors) and metallic or reflective finishes, plus TCL’s Nxtvision color- and contrast-enriching display and camera optimization tech.

Nxtvision boosts colors with a six-axis enhancement for radiance, according to TCL. It hones edges with 2D enhancement, and with its standard dynamic range to high dynamic range (HDR) conversion feature, it’s ostensibly able to deliver video enhancement with increased contrast, brighter highlights, and darker shadows. 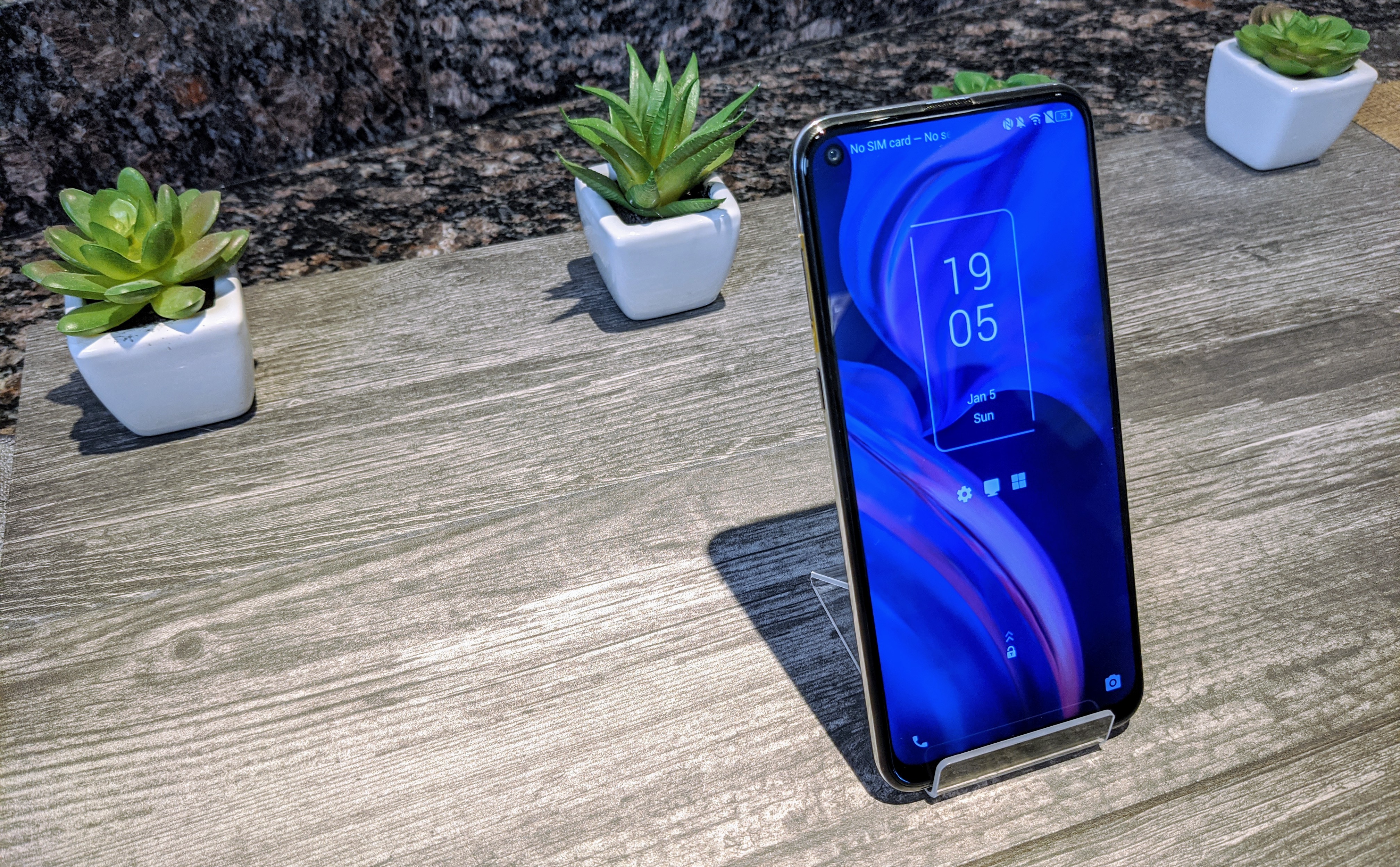 The 10 Pro is the first TCL phone to feature a custom AMOLED display designed by CSOT, TCL’s sibling company. And as mentioned at the top, the 10 5G is TCL’s first 5G phone, though it’s unclear which networks it might support. 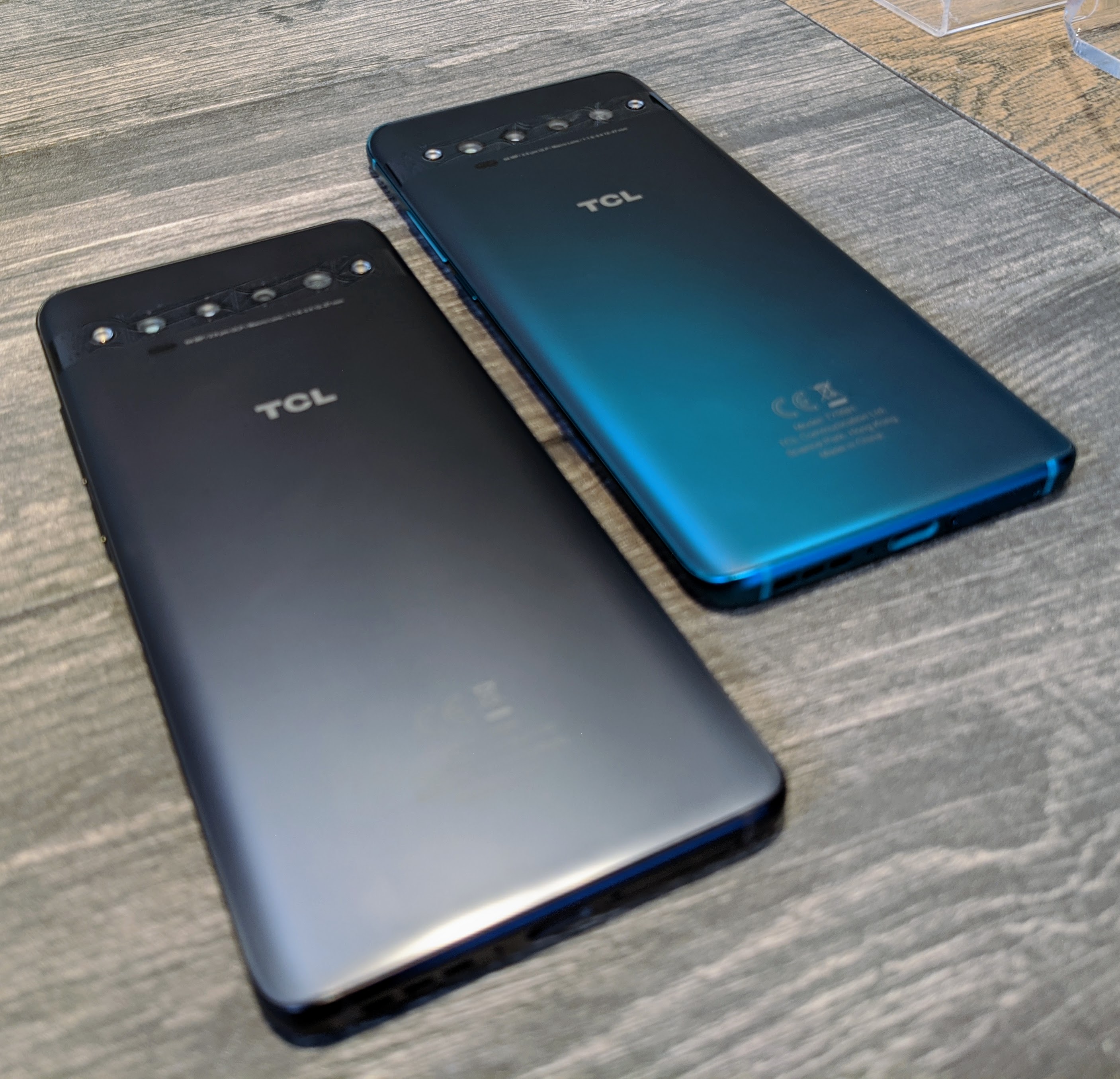 Above: The rears of two TCL 10 Pro models.

The trio of new phones share a number of design elements, excepting the square-shaped fingerprint sensor found on the 10L. The camera arrays are aligned horizontally and run the length of the rear covers, and the displays feature circular cutouts that accommodate the front-facing sensors.

The 10-Series’ debut comes on the heels of the TCL Plex’s European launch. The Plex featured three cameras, one of which is a 48-megapixel Sony sensor with “an industry-leading” 2.9-micron pixel size. Interestingly, the 10L inherits the hole-punch cutout at the upper left of the Plex’s display, which TCL humorously trademarked Dotch (a portmaneau of “dot” and “notch”). But it doesn’t appear to have the Plex’s Super Bluetooth feature that allows up to four Bluetooth devices to connect to the phone simultaneously.

“The 2020 TCL smartphone lineup is our most ambitious effort yet to bring beautifully crafted, modern smartphones to the masses while keeping our devices accessibly priced,” said TCL general manager Shane Lee in a statement. “With each of these new devices, we focused on creating a complete smartphone experience capable of meeting the everyday needs of our customers while delivering on the quality and value consumers have come to expect from TCL.”