This article is part of the Technology Insight series, made possible with funding from Intel.

A major U.S. Federal Communications Commission ruling in April unleashed 6 GHz for unlicensed use — a huge boost for expanding Wi-Fi’s potential. The floodgates for products and solutions that will use next-generation Wi-Fi capabilities are only now starting to open. Consumers and businesses alike should be ready. Globally, 59% of mobile data traffic will be offloaded to Wi-Fi by 2022. So whether your interest is personal entertainment or corporate productivity, understanding recent and coming changes to Wi-Fi is key for smarter planning and choices in everything from AR/VR headsets to enabling remote workers and complex IoT.

To understand Wi-Fi in general and how newest generations improve on their predecessors, let’s examine a few key specifications.(Geek alert!)

Wi-Fi 4 (802.11n), launched in 2007, shows its age but remains serviceable for less demanding environments. A quick refresher on its vital stats provides a useful baseline for appreciating Wi-Fi’s evolutionary advances.

Wi-Fi 5 (802.11ac) arrived in 2013. It dispensed with the 2.4 GHz band and only used 5 GHz. Wi-Fi 4 used a single-user (SU) MIMO scheme. That means a device could only transmit to one receiving device at a time. Wi-Fi 5 hopped to multi-user (MU-MIMO), opening the door to much more efficient handling of multiple clients from one router or access point. Maximum channel width increased to 160 MHz and modulation to 256-QAM. The number of spatial streams doubled from four to eight (although few if any access points ever implemented more than four). The PHY rate (the bandwidth of the network adapter interface) took a massive 11x leap to 6.9 Gbps, yielding a practical MAC throughput of 4.49 Gbps, compared to 390 Mbps for Wi-Fi 4. Again, these are theoretical rates, not what users saw in real life.

If that doesn’t sound worth an upgrade, hold on. Think about how few Wi-Fi devices were on your home network a decade ago. Most of us could count them on one hand. Today, the number has probably doubled and will likely multiply in the coming years. Imagine trying to carry on conversations with multiple people in a crowded room simultaneously. With Wi-Fi 6, you not only can (magically) talk to multiple people at the same time, you can speak and listen more efficiently, so conversations move faster.

Wi-Fi 6 further optimizes for crowded environments with a feature called Overlapping Basic Service Sets (OBSS). With previous Wi-Fi generations, client devices would test if traffic was using a given radio channel before transmitting. If so, they would wait until the channel was clear, whether that traffic came from the user’s network or another competing/overlapping network in the same space. That’s good for easing congestion, bad for latency rates. Rather than waiting until all traffic is gone from a channel before proceeding, OBSS allows the router/access point to “color” traffic by network. The user’s network might be blue and a competing network red. (These are visual metaphors, not literal coloring of IP packets.) If red traffic appears, the router can go ahead and still allow blue traffic, thus increasing reliability and lowering latency.

OBSS will prove critical across a range of applications. One is the growing field of remote surgery, where video must be at the highest possible resolution and with the lowest possible lag. A 2014 study found that “latencies ≤200 ms are ideal for telesurgery; 300 ms is also suitable.” Wi-Fi 6 testing often finds latency rates below 40 ms.

Similarly, VR applications have long struggled against virtual reality sickness, in which frame rates, resolution, and latency can be important contributing factors. The higher bandwidth and lower latency of Wi-Fi 6 can mitigate these issues. Gaming will also benefit from Wi-Fi 6, especially in genres like first-person shooters and rhythm games, where split-second accuracy is critical.

Device density improves, too. Consider IoT environments packed with smart devices, such as manufacturing floors or military theaters filled with troops and ordnance. Hundreds of devices may operate within a few square meters (including battery-powered devices, which will benefit from lower power consumption) all trying to connect at full speed with a single access point. Wi-Fi 6 makes this possible at sustained, previously impossible performance levels.

For security, Wi-Fi 6 relies on WPA3, which remedies some of WPA2’s susceptibilities to brute force attacks on pass-phrases and the ability for malicious users to perform packet capture in public hotspots. WPA3 enables Wi-Fi Enhanced Open, which preserves encryption on an otherwise open network, alleviating some need for security through VPNs. This will make public wireless computing, as well as high-traffic work environments (think office hoteling and headquarters meeting rooms) much safer and more convenient.

In the year since launch of the spec, we now have a fair number of high-end (and backward-compatible) routers that support the spec. However, in January 2021, expect Wi-Fi 6E’s arrival. Wi-Fi 6E  takes advantage of the April 2020 Federal Communications Commission (FCC) decision to open 1200 MHz of radio spectrum around 6 GHz for unlicensed use. This will enable another seven 160 MHz channels.

Above: As the number of channels available to client devices grows with the 6 GHz band, there will be opportunities to make trade-offs between higher speeds and higher device counts.

Wi-Fi 6E preserves all Wi-Fi 6 features and adds a third radio band at 6 GHz. This extra bandwidth will be increasingly valuable to high-data rate applications, particularly those with high-def video components. We mentioned virtual reality, but augmented reality will also benefit. So, too, will service providers offering things such as in-vehicle entertainment and high-speed device tethering. Wi-Fi 6 enables 4K and higher video feeds, with more cameras connecting into fewer access points, thus saving on infrastructure costs.

It may take longer for 6E to become mainstream, as conventional applications and environments may not need the extra traffic legroom.

Wi-Fi 7 (802.11be) is expected to arrive in 2024. This latest evolution could be the Gigabit Ethernet-killer you’ve been waiting for.

Part of this will stem from adoption of 4096-QAM and part from an ability to work across 2.4 GHz, 5 GHz, and 6 GHz simultaneously, rather than hopping singly to the best-possible option. Wi-Fi 7 will embrace up to 320 MHz channel bandwidths and 16 spatial streams. Interestingly, as the IEEE’s candidate features document discusses, wider channels are not always better. But the issues with very wide channels can be mitigated with simultaneous multi-band operation. All this will more than quadruple Wi-Fi 7’s maximum theoretical data rate to over 46 Gbps, with expected real-world bandwidth up to 30 Gbps shared across many devices. 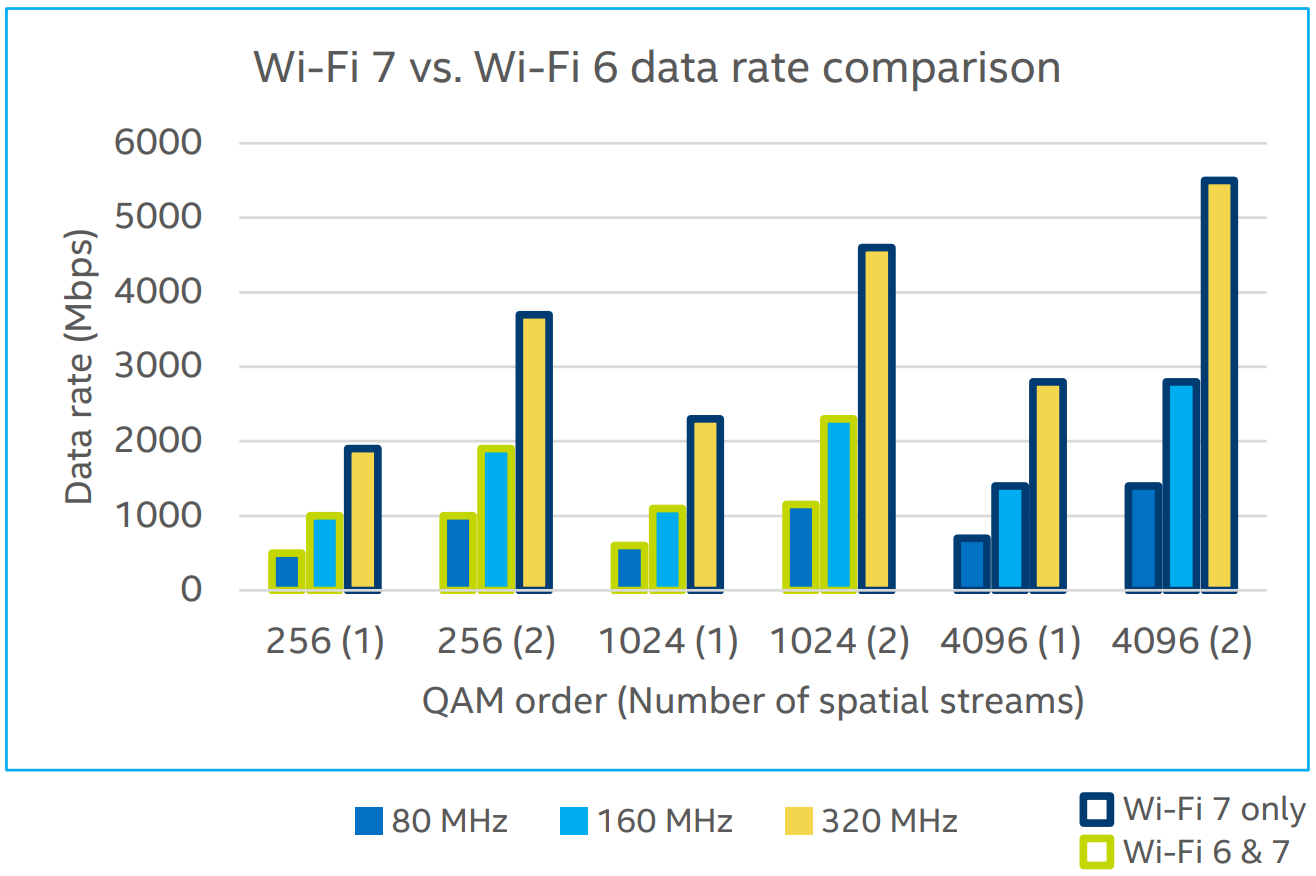 Video will be a huge beneficiary. 8K video uses four times as many pixels as 4K, and many people likely will need multiple streams delivered. Wi-Fi 7 is expected to triple Wi-Fi 6’s speeds across twice the number of frequencies, in part due to the ability to transmit and receive simultaneously across the same frequency as well as across multiple bands. Again: faster speeds, more devices, and lower latency. Everything that benefited under Wi-Fi 6 and 6E gets better in this next release.

First-gen Wi-Fi 7 chipsets are expected in late 2023, but there’s a long road for Wi-Fi 6/6E iterations to play out before production-ready Wi-Fi 7. Still, there’s a lot to be excited about. If industry leaders like Deloitte, Cisco, Intel and others are correct, Wi-Fi and 5G will co-exist and play a critical role in providing uninterrupted, dramatically better performance for AI, edge, and cloud applications benefitting consumers, mobile workers, and organizations alike.