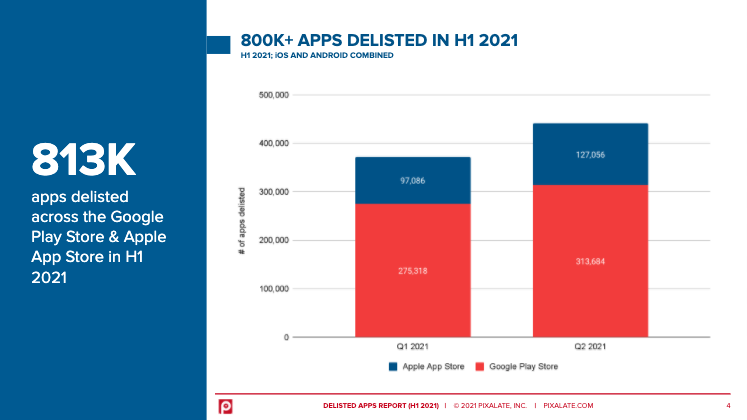 In total, more than 813,000 apps with over 9 billion downloads — 86%+ of which targeted children aged 12 and under — were removed from the Google Play and Apple App Stores. After analyzing more than five million mobile apps, the report found that consumer privacy and security, as well as brand safety for advertisers, may be at risk. Notably, delisted apps can remain installed on a consumer’s device even after they have been removed from the app store.

Apps can be delisted for a variety of reasons, spanning from relatively nefarious (e.g., app store policy breaches) to benign causes (e.g., developer withdrawal). The report neither asserts nor assigns a reason for any delisting action. Additionally, the initiator of the delisting is generally not publicly available information, so it is often not possible to know whether the removal was triggered by the app store or the developer.

Pixalate’s data science and analyst team analyzed the 5 million+ apps and app developers delisted from the Google Play Store and Apple App Store from January 1 through June 30, 2021. An app is considered delisted if it existed in a given app store in a given time period of interest and then it was removed.

Read the full report by Pixalate.