7 Things We Wish We Knew Before Starting Rubber Bandits

Rubber Bandits is a super silly cartoon-like brawling game where your ultimate goal is to steal as much loot as possible before successfully escaping the stage. You can choose from a wacky roster of characters such as a classic thief, a goofy banana, and even a dastardly grandma. Rubber Bandits feels like the best part of Gang Beasts mixed with an off-the-wall party game where stealing cash is the aim of the game.

Rubber Bandits is not at all a complicated game, opting for a simple control scheme and only a few select goals. However, what it lacks in complexity, it more than makes up for in crazy fun. As you run around each diverse stage, you need to contend with other players, environmental hazards, picking up weapons, and simply surviving in order to escape. The following tips will help you get started in the game.

7 How To Choose Game Modes 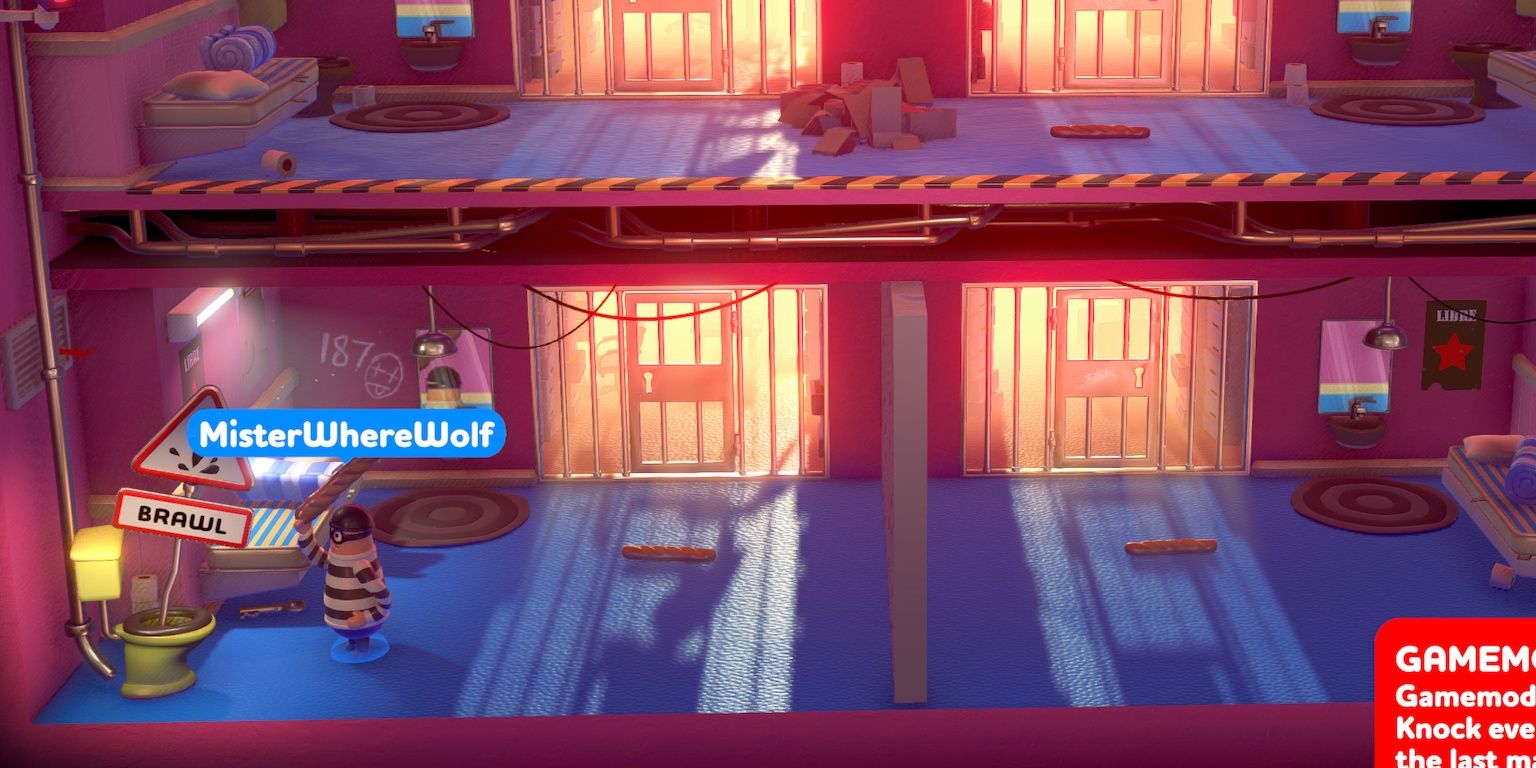 Rubber Bandits features a few game modes to choose from, namely, Heist, Brawl, and Arcade. Heist is the traditional game mode where you need to loot cash and make it to the escape door. Brawl is a simple free-for-all fighting match. Arcade is a solo mode where you move from stage to stage gathering loot and staying alive.

Choosing a game mode in this game isn't obvious. In order to change game modes, you need to enter the jail area and drop down to the lower level. If you hit the toilet sign on the lower left of the screen you will then change modes. On the opposite side, you can change whether you want to play in teams or no teams.

6 Steal All Of The Loot 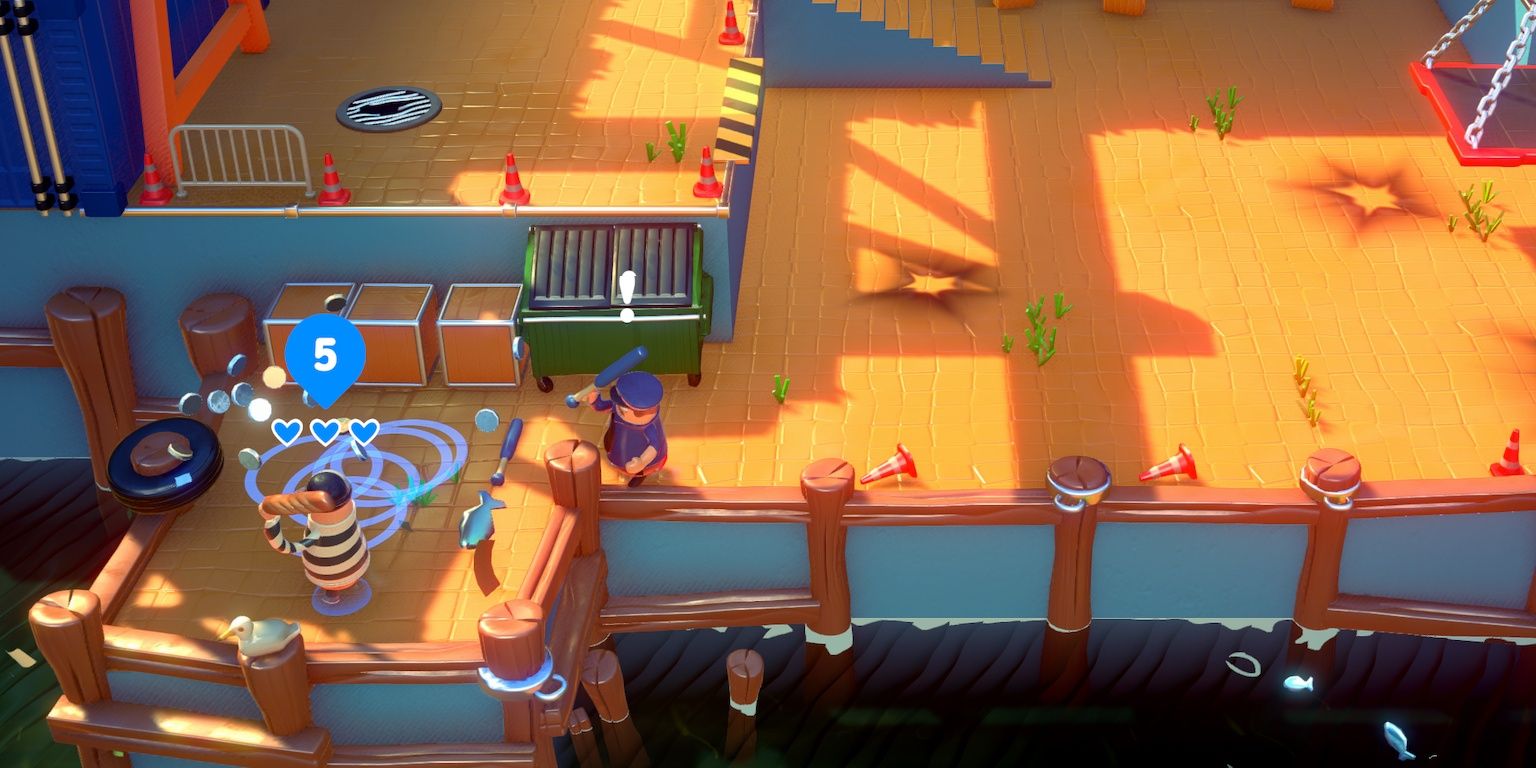 The majority of time playing Rubber Bandits will likely be spent in Heist mode, given it's the mode that seems to blend all gameplay mechanics the best. Your main objective is to steal as much loot as possible and quickly escape. However, there are only ten loot piles to pick up and you can lose them at any time if someone bashes you.

Each stage has a different way to obtain loot. Some stages have you open up a vault while others require you to smash some loot containers. Either way, focus on getting as much as you can prior to making it to the exit. Players will try to knock you out if you are holding the most. 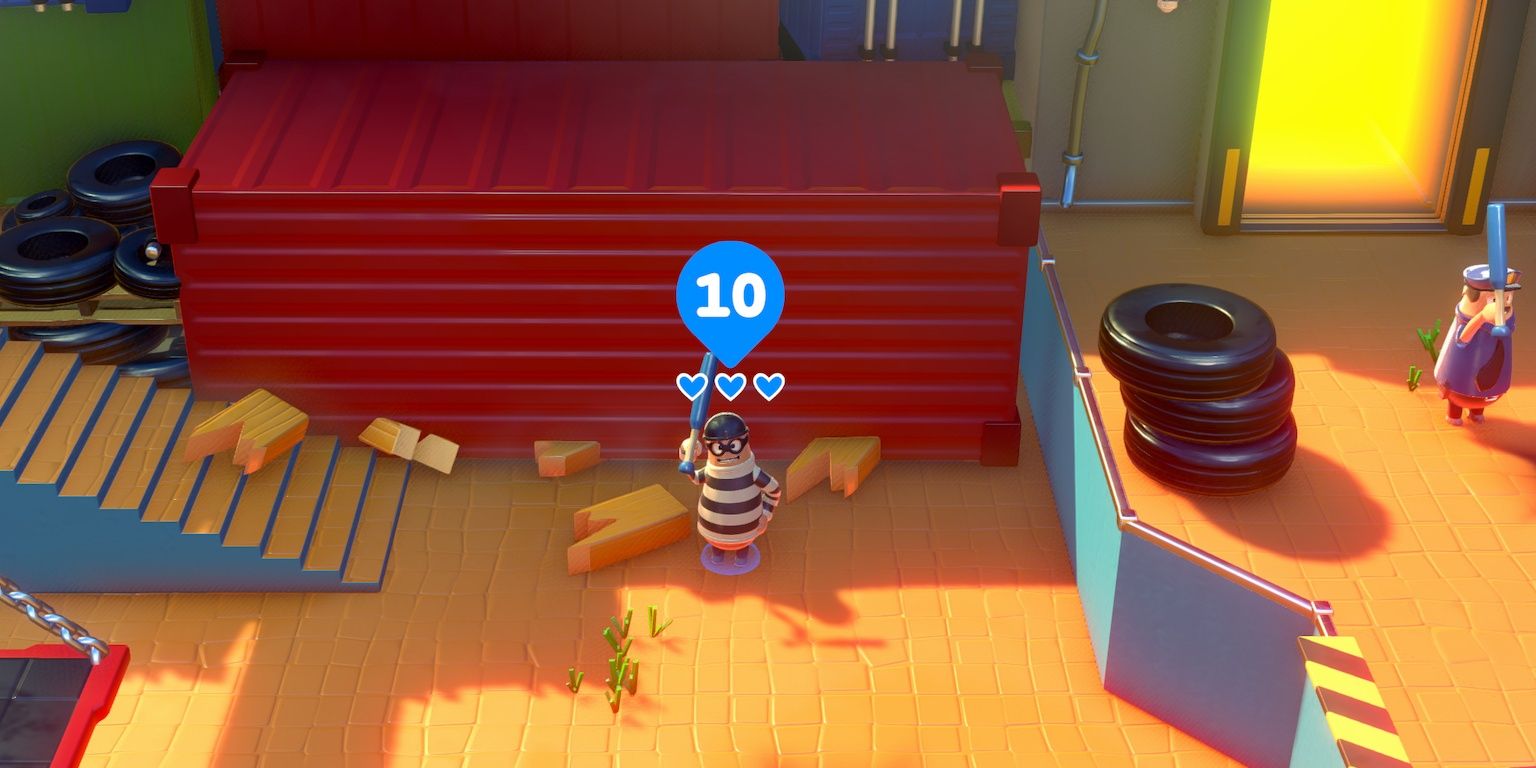 Rubber Bandits features a whole host of wacky stages to play in. Stages are set across museums, mansions, docks, plus many others. Each one feels lively and whimsical, straight out of a Saturday morning cartoon. One of the best parts of the stages is that they are fully interactable.

Almost everything in the stages can be broken down or broken apart, often revealing new paths to the escape areas. For example, one museum stage has you break a glass case. Once broken on one side, you can use that as a ramp to take your loot to the escape door. Have fun breaking things in the stages to really cause some havoc.

4 Almost Anything Can Be Used As A Weapon 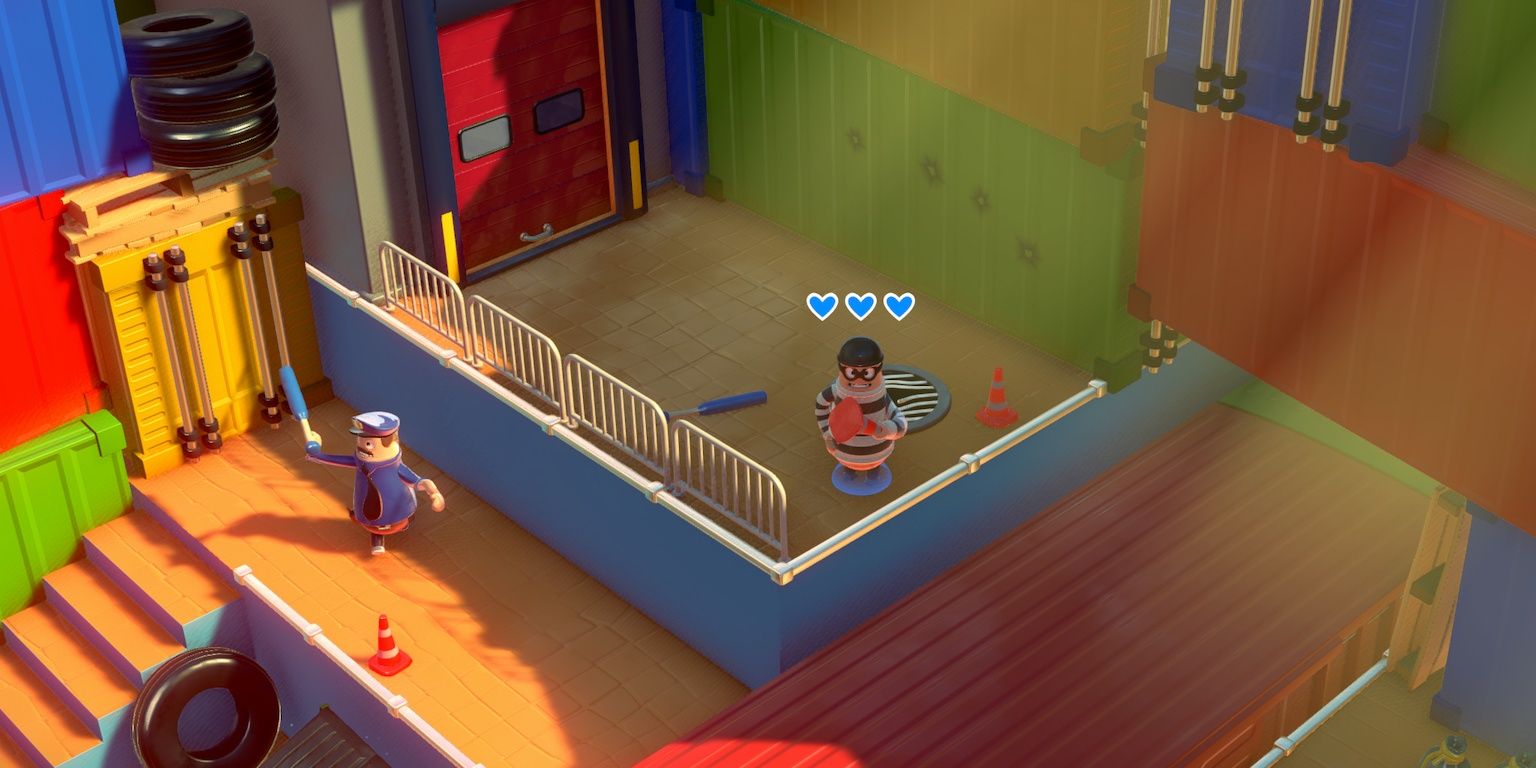 Aside from just punching other players to knock them out, you can also use a plethora of traditional and wacky weaponry. Pretty much anything can be used as a melee or thrown weapon in this game, from baguettes to fish to chairs, and even a donut.

Don't worry about what you are picking up when trying to knock someone out. Simply grab any item and whack the character near you to knock them out in order to steal their beautiful loot. Just keep in mind that the heavier items won't be able to be thrown quite as far.

3 Use Cash To Buy New Characters 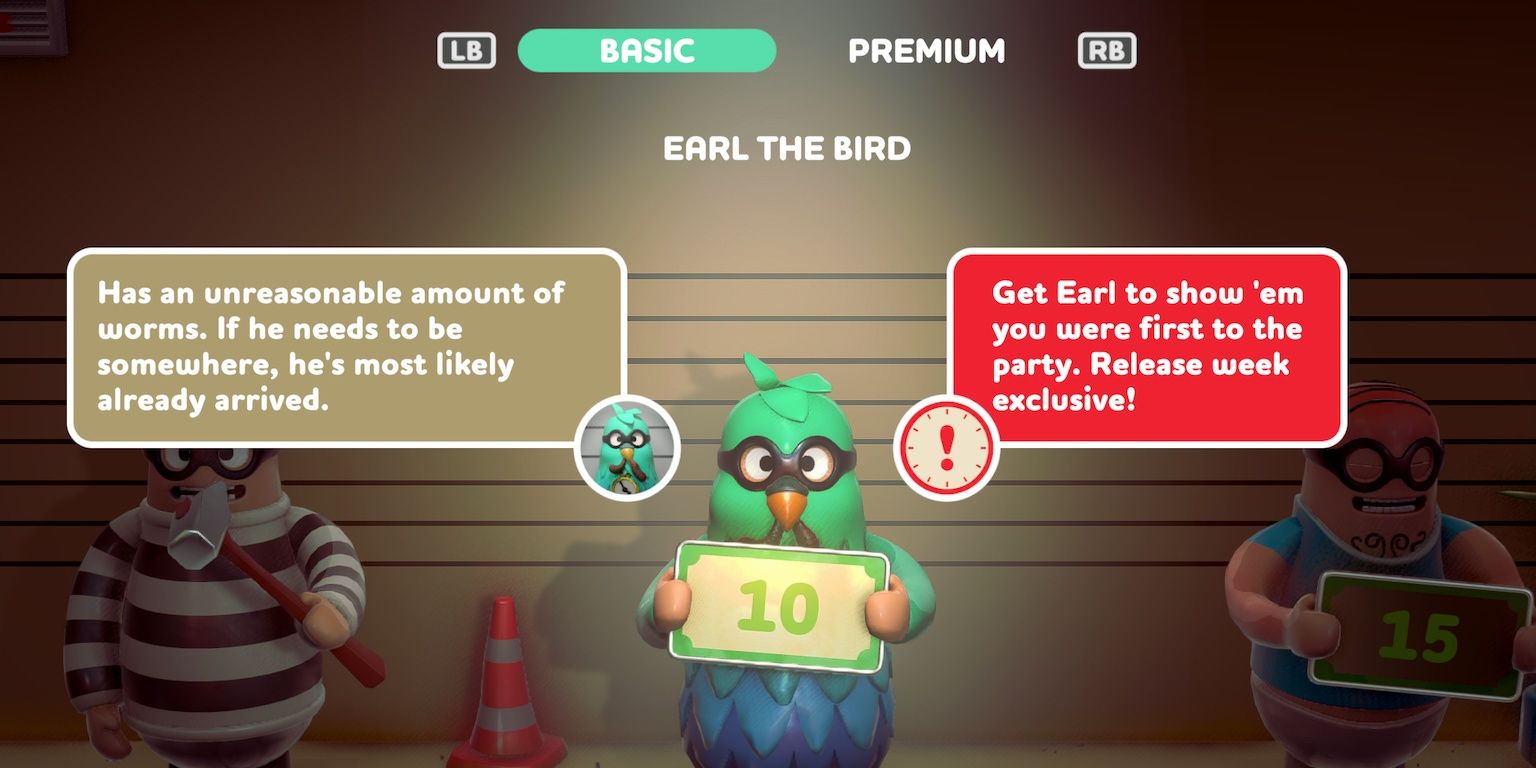 One form of progression in Rubber Bandits is acquiring in-game cash to purchase and unlock new characters. Rubber Bandits is pretty simplistic in terms of rewards, often to the game's detriment. However, there are a decent number of characters to unlock with some of them costing hundreds of dollars.

You can get cash pretty easily from the solo or local co-op arcade mode and you can also obtain it from playing the online heist mode. The game doles out a decent amount of the currency so you should be able to at least purchase a few new characters in the first hour or so.

2 Practice In The Armory 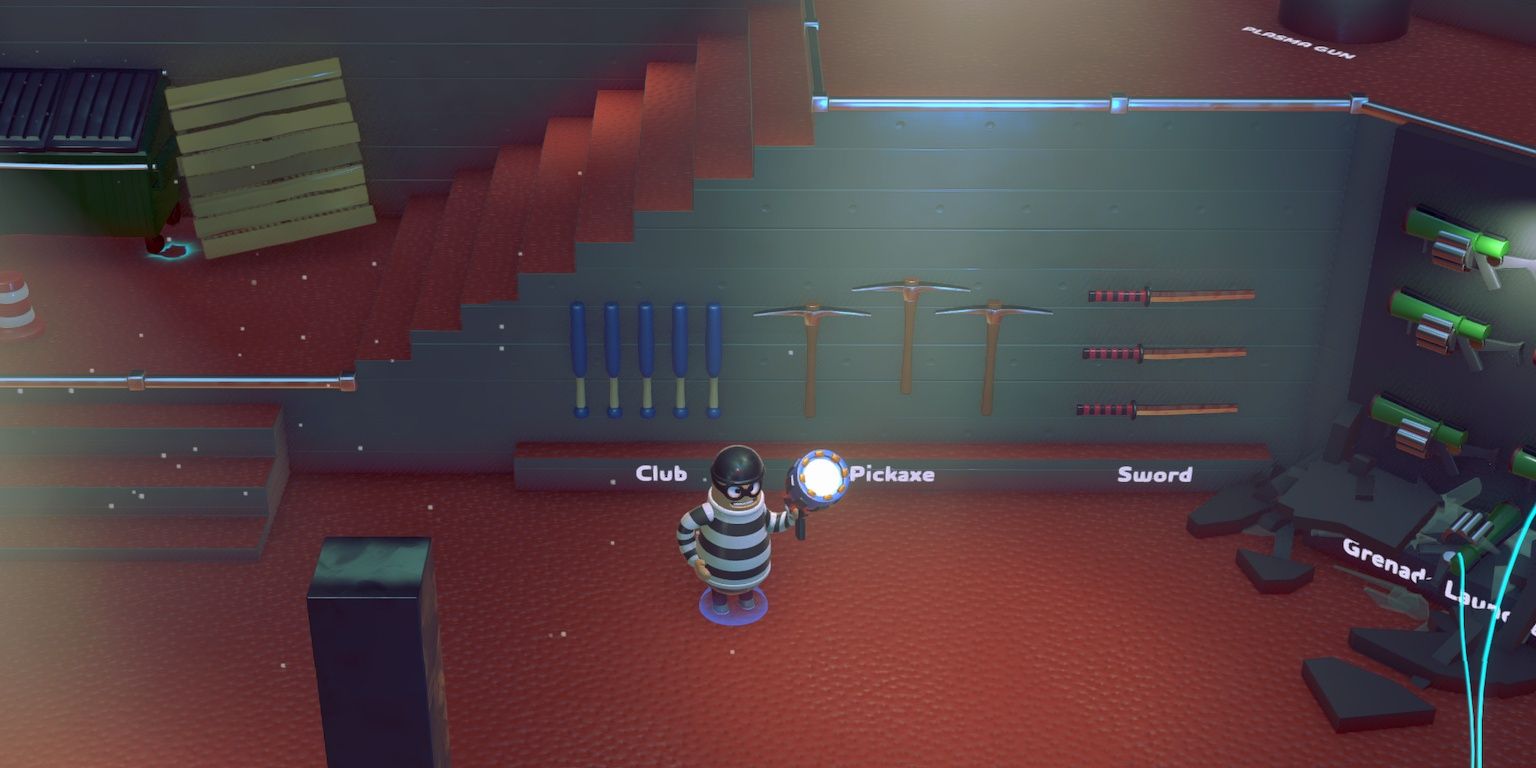 While not a complex game by any means, it can still take a while to get to grips with the wonky physics movement controls and gameplay. Plus, there are so many weapons to try out as well as unique items just as a suit of armor and a jetpack.

If you want to get used to all of the weapons and items, simply head over to the armory. The armory is a sandbox play area where you can try out everything the game has to offer against some AI baddies at the press of a button. If you are struggling using a weapon in a match then be sure to practice with it in the armory. 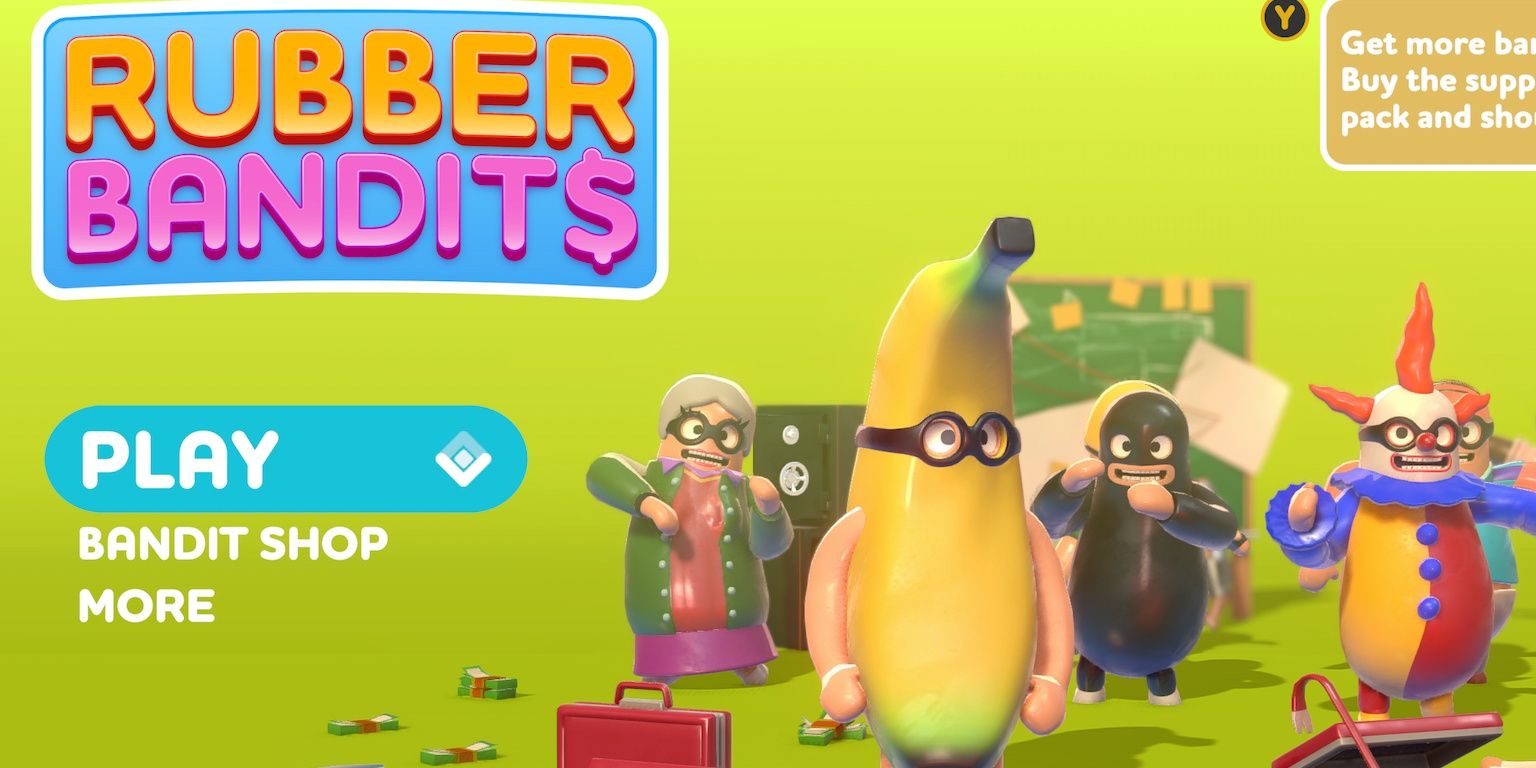 Oftentimes smaller indie games don't get the opportunity to feature online play given how expensive it can be to run and maintain servers. Fortunately, Rubber Bandits not only features online play but it features cross-play as well. Having cross-play in a smaller multiplayer game can go a long way to keep the player base thriving.

Since matches only contain up to four players, it's generally pretty easy to get enough people in a match. You can always play in offline modes but there isn't an option to add AI bots, unfortunately.