8 Hidden Areas In God Of War Ragnarok Everyone Completely Missed

With God of War Ragnarok’s average story completion of 20-25 hours and a completionist time upwards of fifty hours, depending on combat difficulty, there are a ton of optional places to check out. You can find all of these by yourself by walking to every corner of all the realms, not forgetting to check for passageways accessible with items like your spear or the arrows of allies.

A few of these are connected to side quests or aren’t hidden away all that much, but with how complicated the solutions to accessing these areas can be, we’ve decided to include them on this list. Don’t forget to check out these areas personally for rewards and additional character-specific dialogue. 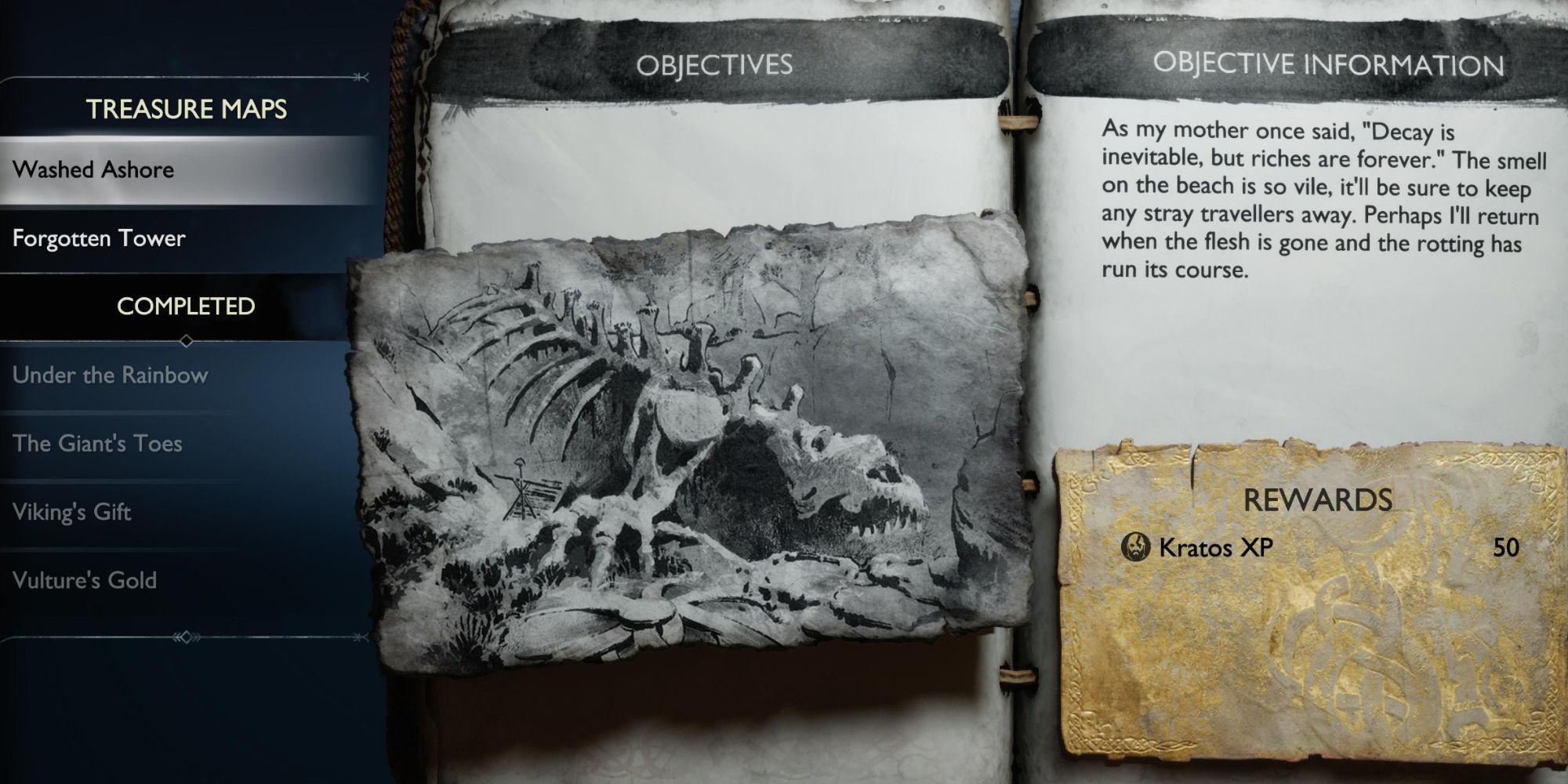 Treasure map locations are created with mystery in mind – you’re meant to go out there and find them from the drawings provided. Most of these maps are drawings of monumental structures, so as long as you know which realm the structure is in, you shouldn’t have too much difficulty finding them.

To begin treasure seeking, first find the actual map and then use the sketch provided to locate the buried treasure. A good place to start is Svartalfheim, but bare in mind that some are more challenging than others, especially those located indoors.

7/8 Bridge To The Broken Prison 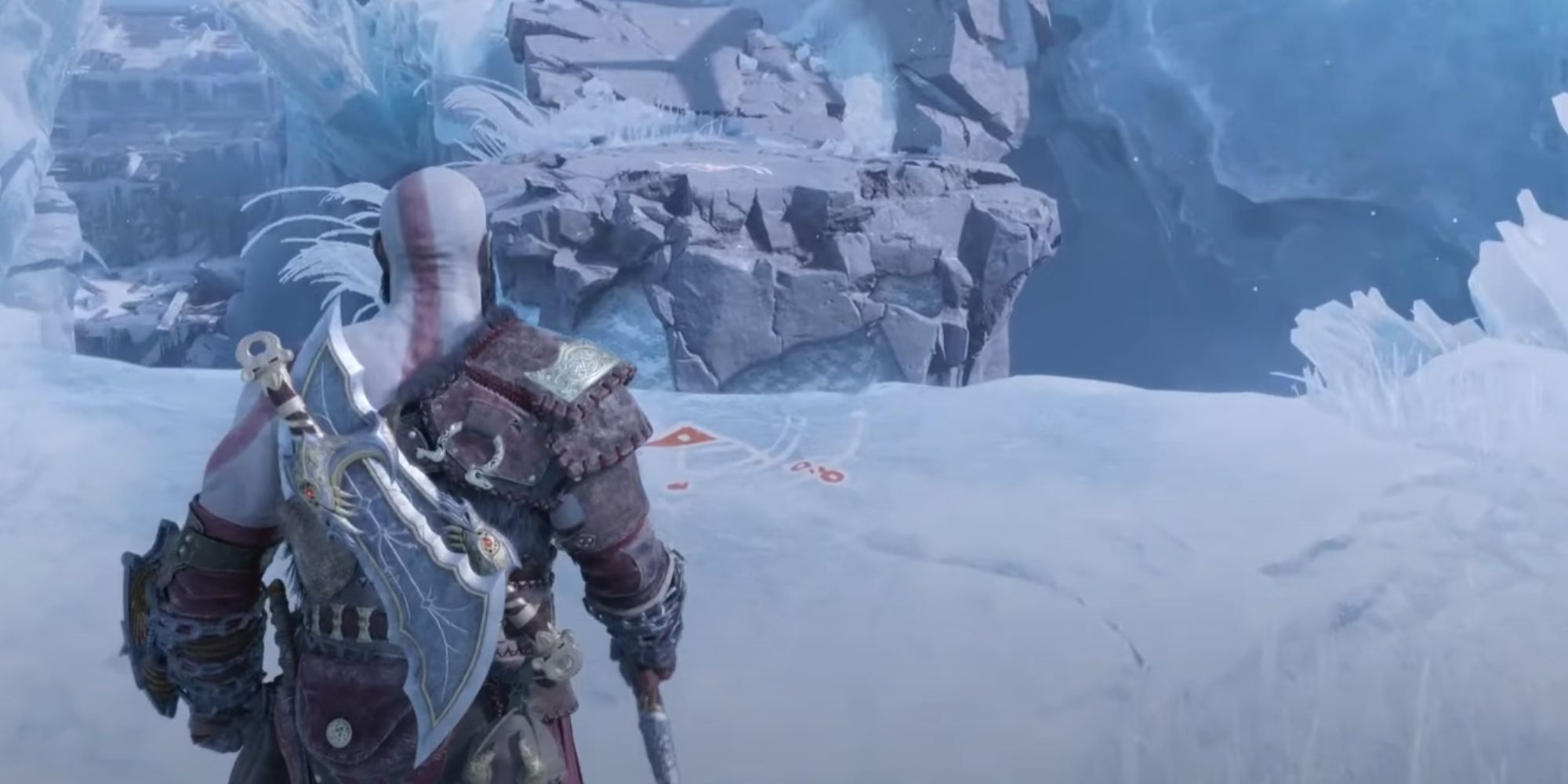 The bridge is a surprisingly missable structure which might be why you pass up on an important moment. This bridge only appears after completing the story, and crossing over it will start The Broken Prison side quest, where you search for the real Tyr.

The first thing to note is the bridge is next to the Raven Tree, a place you’ll already have visited often if you’ve been completing the Eyes of Odin sub-quest. Use this bridge, and you can explore the building ahead. 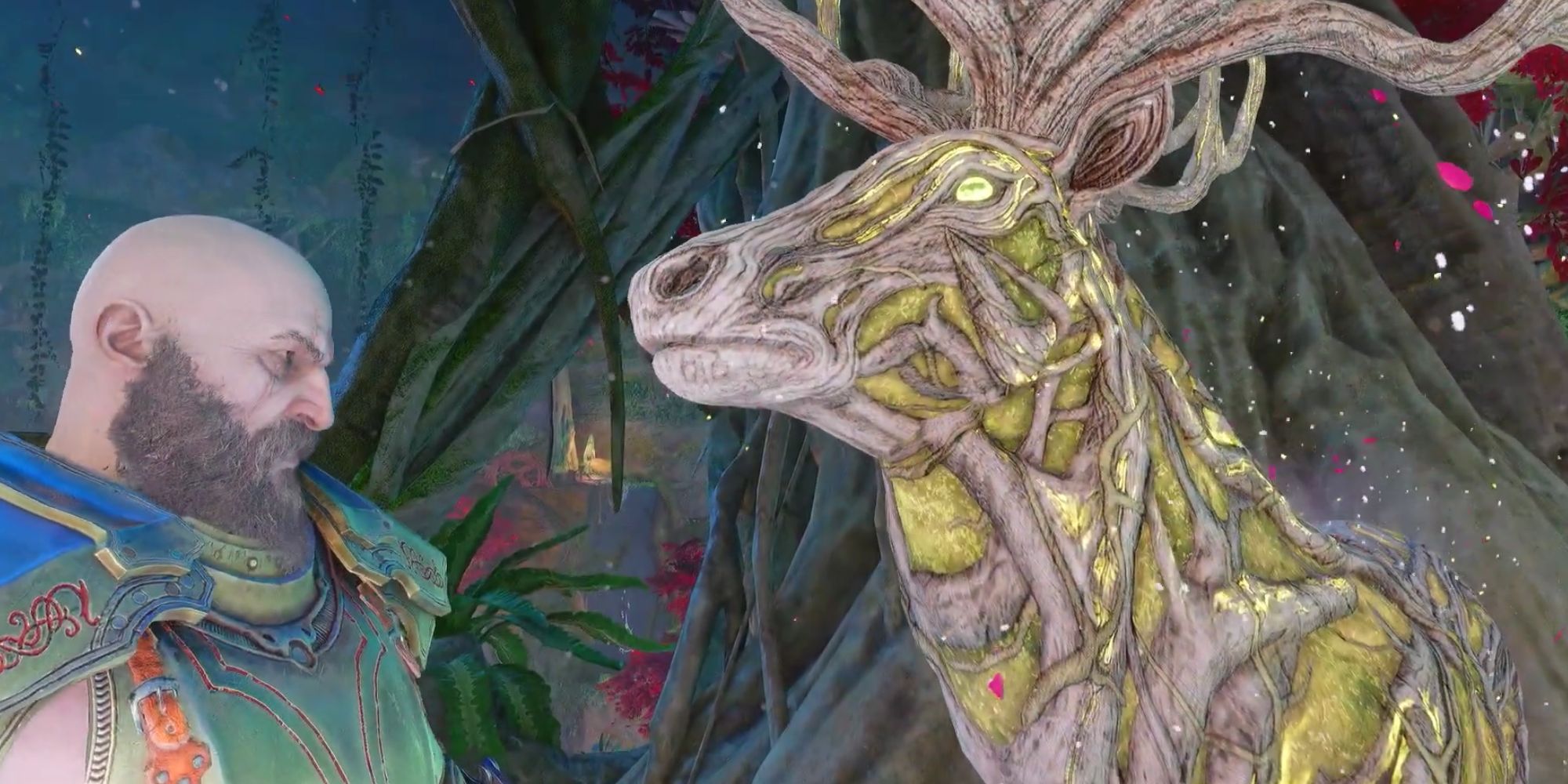 The Crater is an optional Vanaheim region that some may completely skip since it can’t be unlocked until the game’s late stages. There’s a lot to do here, and you’ll want to make your way in if you’re going after 100 percent completion and the platinum trophy. You’ll first need to open the dam; otherwise, you’ll be locked out of a good majority of the area. But even with this, making your way around is a struggle. Using some form of guide is recommended.

Other than that, explore at your own pace! As little or as much as you’d like. It’s a massive area with many islands to check out, and chests to loot.​​​​​​​ 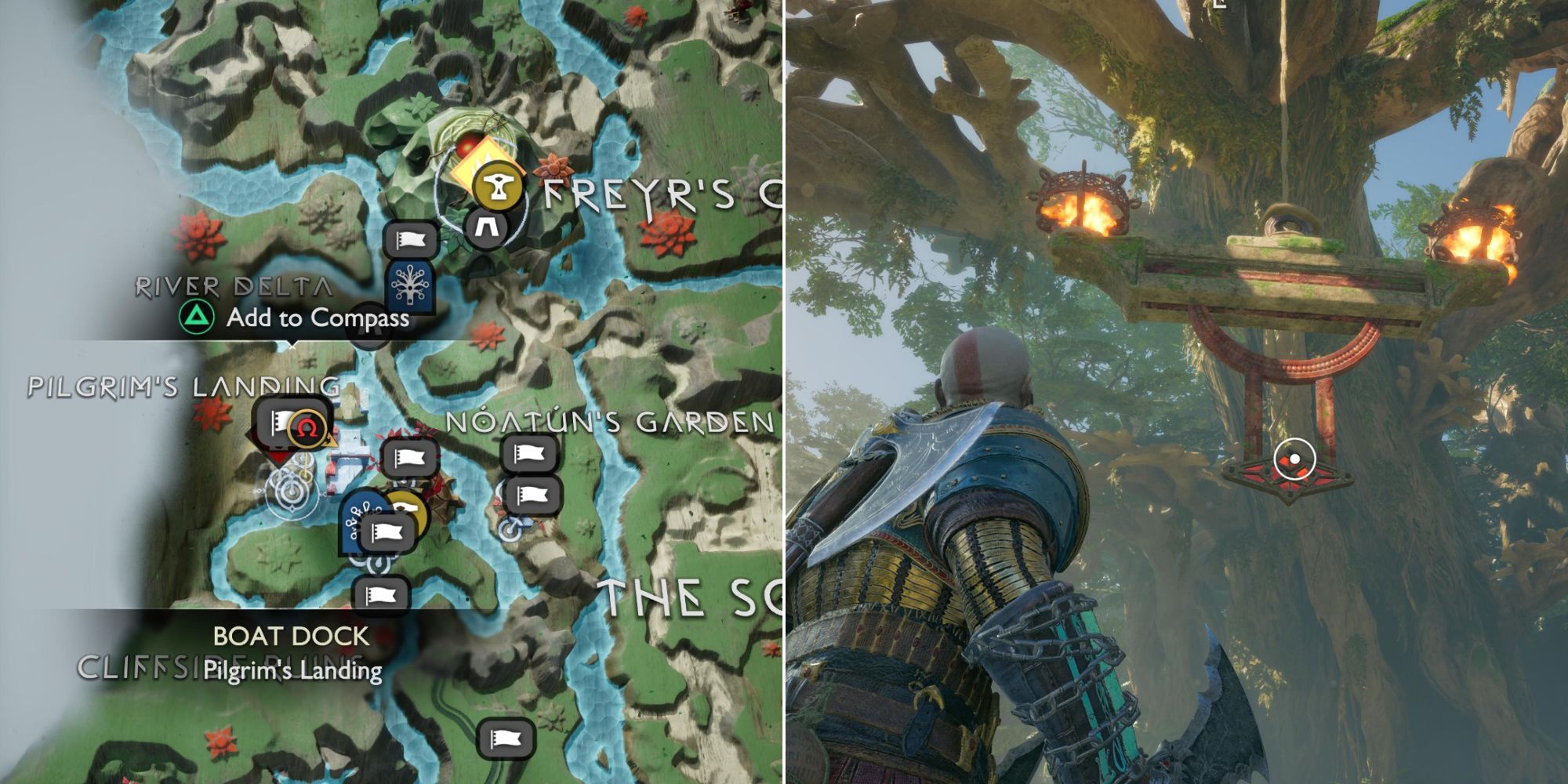 The reason for Pilgrim’s Landing’s obscurity is the sheer difficulty of completing the brazier puzzle to continue, so let’s break it down. To get to the tempting legendary chest, follow the white markings which show where Kratos can climb, and you’ll come to a locked bridge. Burn the mushrooms on the left with sigil arrows, and break the chains with your axe. Carry on in that direction.

Turn to your right and look upwards, where you’ll spot two braziers hanging from a tree, and there should be something your blades can hook onto at the bottom. To the right of these braziers is another. Swing the middle two braziers to the right one, and then connect the two middle braziers with sigil arrows to light them both.

Finally, swing the middle braziers to the singular one on the left. Connect this same brazier to the mushrooms with your sigil arrows, and break the bridge’s chains with your axe. The door will unlock. 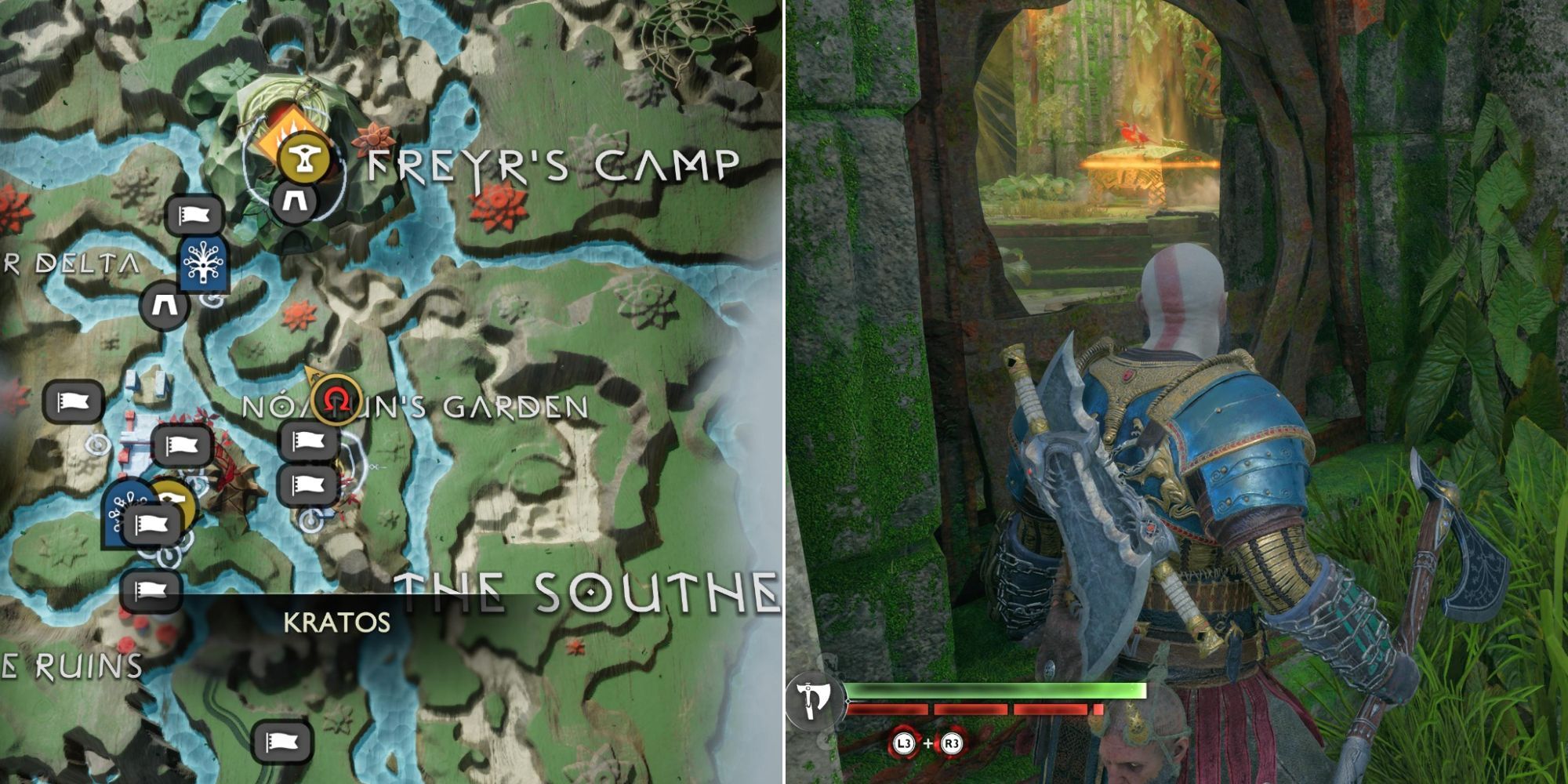 The legendary chest at Noatun’s Garden is another puzzle fest but, thankfully, not as challenging as the one at Pilgrim’s Landing. What stumps many here is the need to move to an island next to the garden before you can burn the mushrooms covering the room. Climb into your boat and go through the passage under the tree directly to the left of the chamber.

Dock your boat, climb up the stairs and jump across the bridge to get a better angle at the mushrooms. Then use the sigil arrows to chain close enough to Kratos that you can set them alight with your blades. You can technically brute force this through the chamber window, but it’s far easier from this angle.

3/8 Baldur’s Mount At The Lake Of Nine 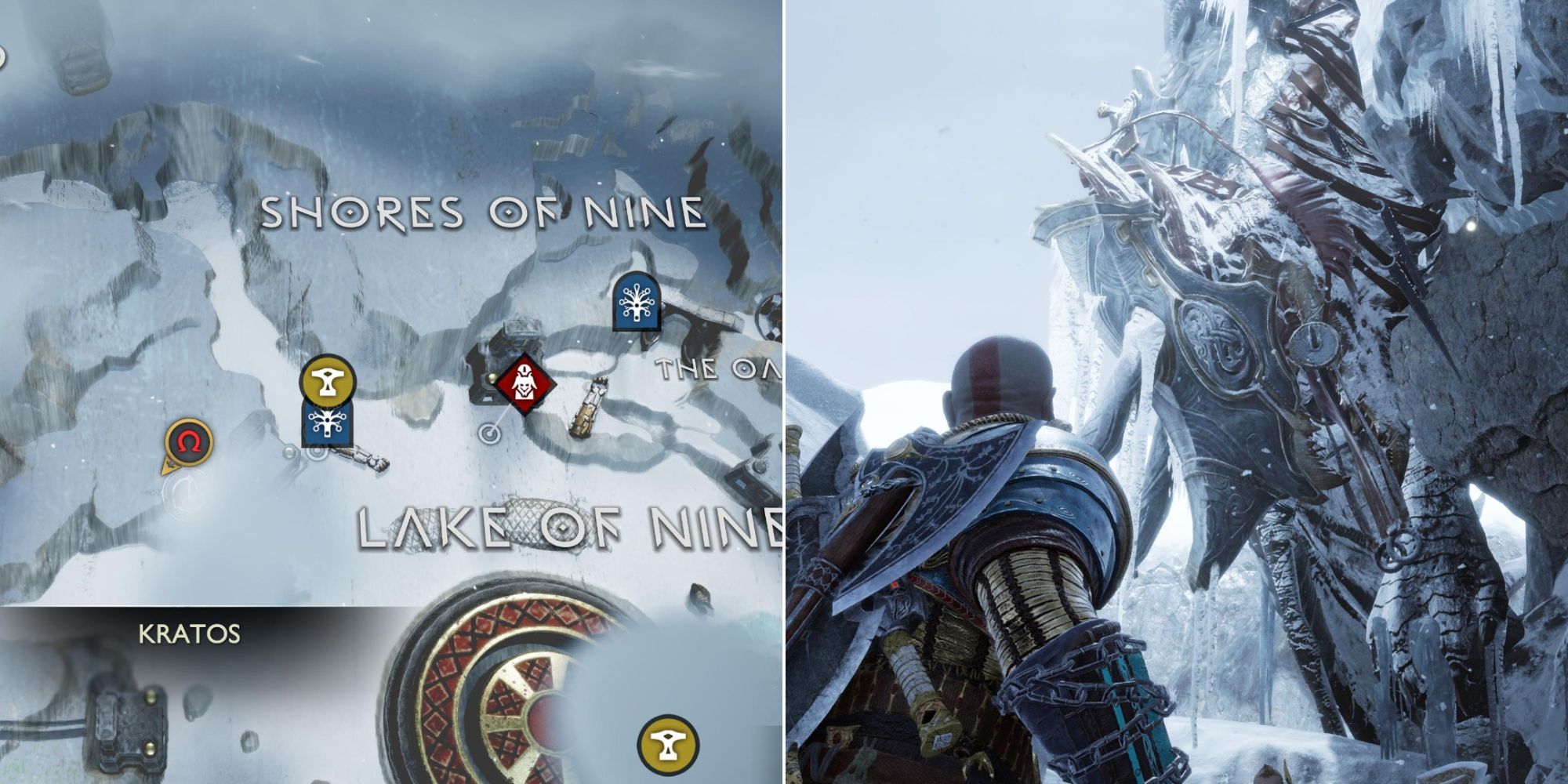 Between the Lake of Nine and the Shores of Nine, there’s an ice block with yellow light shimmering from inside it. If you’ve gotten far enough in the story where you now have your hands on a spear, you’ll know what to do with the ice. Aim your spear at the yellow light, throw it, and detonate it to make a passageway into a small closed-off area.

Inside is the frozen remains of an enemy from the 2018 God of War. Baldur’s dragon mount Dagsetr, to be exact. Atreus will mention how strange it is that the body is so well preserved, and in reply, Mimir will say much has changed for everyone since then. 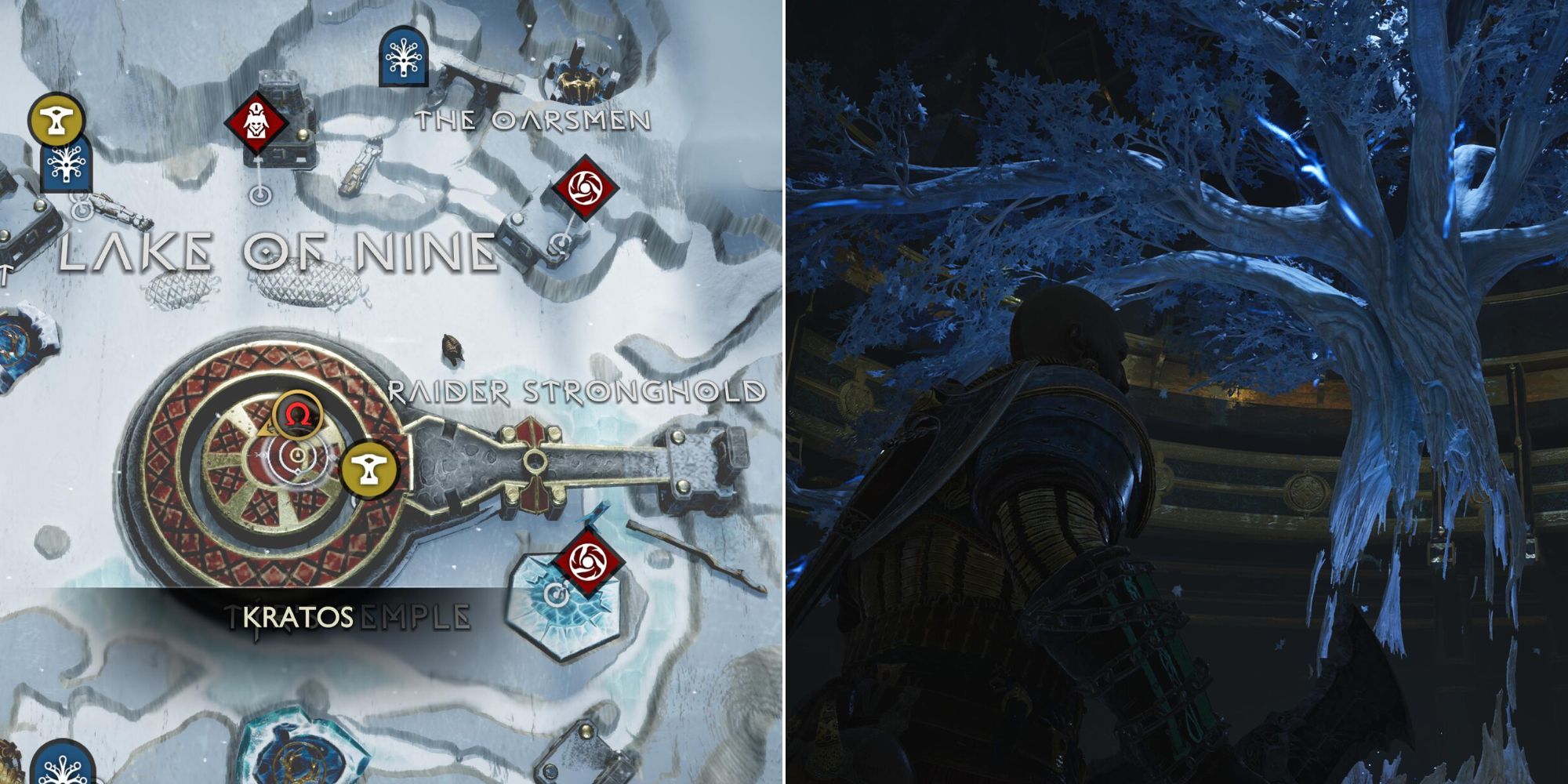 With the other realms at the forefront of Ragnarok’s story, Midgard takes a backseat for most of the game, and if you’ve never played 2018’s God of War, you’ll be completely unaware of this particular location. To access Tyr’s Temple, go to the huge building in the middle of the Lake of Nine and find a lift that will take you to the top.

Run all the way to the other side and enter the building through the towering door. You’ll know you’re in the right place if your allies comment on it feeling weird to be back here again. Continue to the next set of doors, where the Yggdrasil tree is inside the Realm travel room. You can no longer use the table to access other realms, but you can have a look around.

1/8 Cavern At The Far Side Of The Forbidden Sands 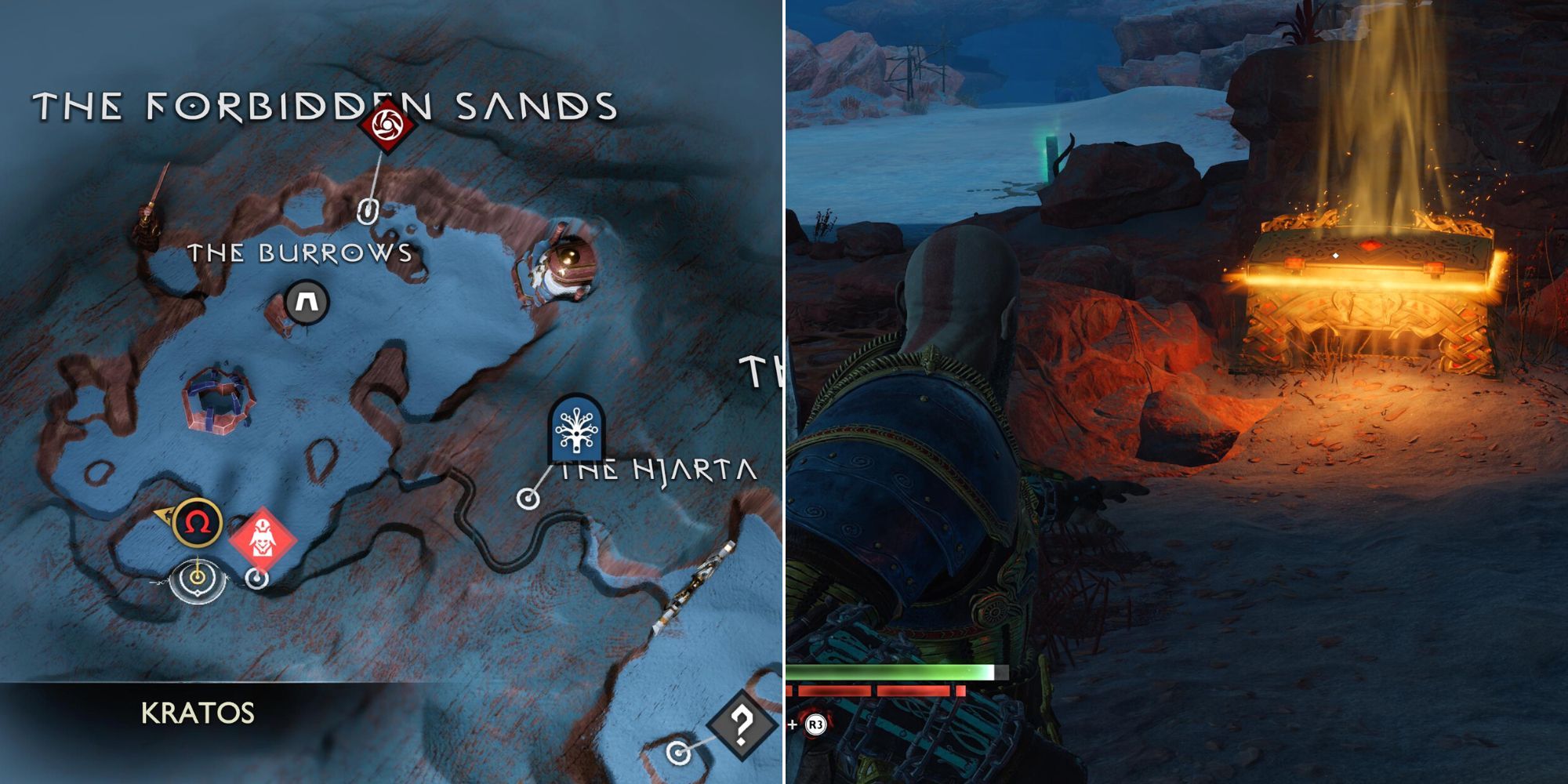 Placing something in the far corner of the map is like asking players not to spot it, since you’ll have to look in the right direction to notice this cavern. There’s a thin passageway through The Hjarta in Alfheim that leads into an area called The Forbidden Sands. Go through here and to the bottom to get to this cavern.

You’ll be met with a puzzle involving twilight stone, hive matter, sigil arrows, and your axe. Use the stone provided to take out the hive matter on the right before tackling the left side. The second stone is covered in Hel’s bramble, and you’ll need to use sigil arrows to burn it. Once doing this, use both of the twilight stones to break the final hive, allowing you access to the legendary chest.