My first experience with The Elder Scrolls 5: Skyrim found me stepping out of a pastoral village for the first time to inspect a nearby ruin. That’s when I — and everyone else who booted up the game — got jumped by a dragon in a scripted encounter.

But my experience was unique. At that exact moment a giant came wandering by. The ensuing three-way fight, with my pitifully low-level character trying not to be crushed underfoot, was incredible. That’s the same sort of gameplay that the team at Modiphius Entertainment hopes to recreate with The Elder Scrolls: Call to Arms, due out in early 2020 at retail.

Announced in May of this year, Call to Arms made a bit of a splash at this year’s Gen Con by selling the first of its miniatures — the iconic Dragonborn himself — in a special, collectible resin edition. And he’s not alone; Modiphius tells Polygon that there are more than 150 more sculpts already in the pipeline for its ambitious, hybrid miniatures game.

Modiphius burst onto the tabletop scene in recent years. Its journey began in 2015, when founder and publisher Chris Birch launched a Kickstarter campaign for a game based on the Thunderbirds franchise. The kicker was the talent signed on to design — none other than Matt Leacock, the creator of the Pandemic franchise. The campaign was a success, and led to a host of other projects. Modiphius now publishes tabletop games and pen-and-paper role-playing games across licenses as varied as Conan, Star Trek, Tales From the Loop (soon to be a streaming series at Amazon), and Frank Herbert’s Dune. Modiphius is also currently in charge of the 5th edition of Vampire: The Masquerade, following White Wolf’s disastrous launch and subsequent implosion. 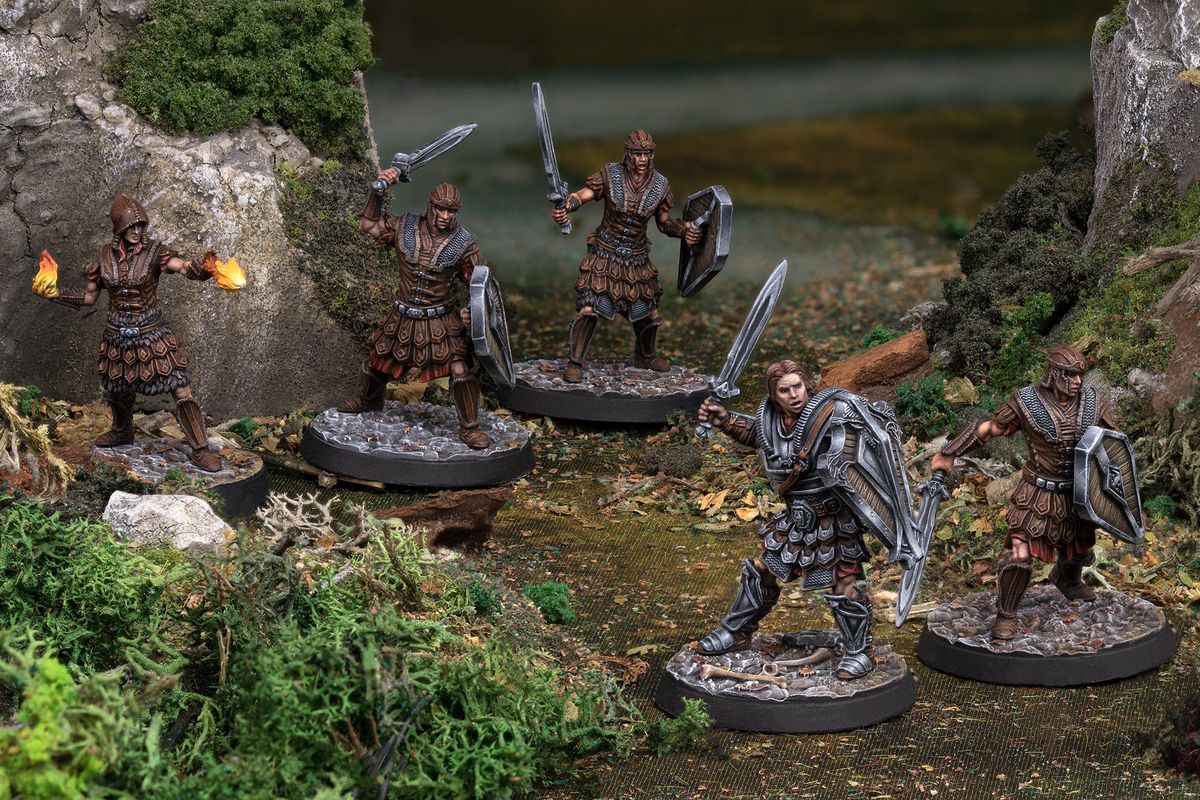 Heading up the miniatures Elder Scrolls line is Mark Latham, one time editor of Games Workshop’s White Dwarf and, later, the managing editor supervising both the Warhammer and Warhammer 40,000 product lines. As for bona fides in the tabletop miniatures space, it doesn’t get much better than that.

“I worked on the sixth edition Warhammer 40K,” Latham told me during our interview last month. “That line was the fastest-selling 40K edition in the world. It was a 200,000 copies in the first year. Later, I did Warhammer: Storm of Magic, which was the biggest expansion we had done for Warhammer at the time. It had lots of cool stuff, like the inside of the cover of the book had a little spinner for the winds of magic and things like that. That was my idea.”

Vampire: The Masquerade’s latest edition is trying to deal with sex and power in 2018

This is Latham’s second project for Modiphius and Bethesda Softworks, who created The Elder Scrolls. He also developed Fallout: Wasteland Warfare, a miniatures game based on the classic post-apocalyptic franchise. Since its launch in 2017, that line has expanded to more than 300 sculpts.

When the first wave of miniatures for Call to Arms is released early next year it will include two factions, the Imperials and the Stormcloaks. When players square off against one another they’ll line their armies up on opposite sides of the table. Heroes drawn from Elder Scrolls lore, like the Dragonborn and members of the realm’s powerful guilds, will lead them into battle. And, roaming the battlefield at large will be creatures very much like the giants and the dragons that caused so much chaos in the original video game. 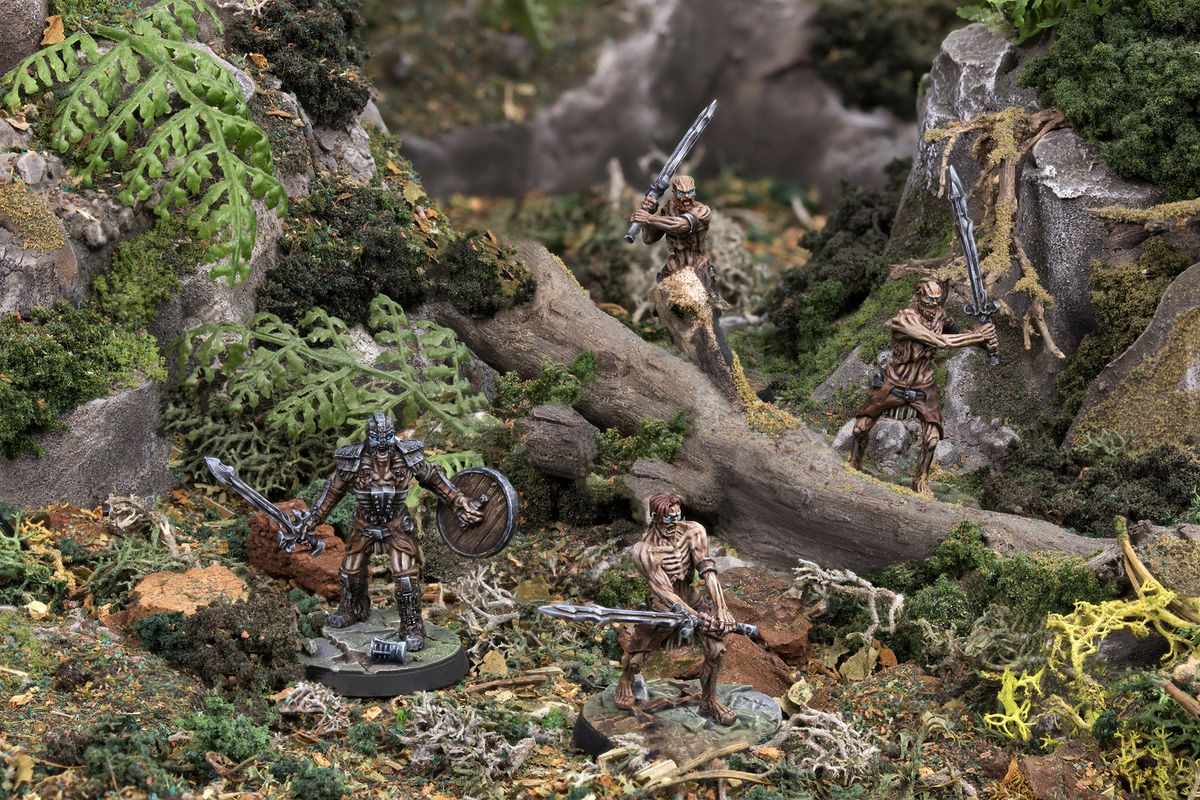 “We call them adversaries,” Latham explained, “which are an AI-controlled monsters, things like the Draughr, eventually dragons, Atronachs, Daedra, all that kind of cool stuff from the Elder Scrolls universe. And they are basically forces of nature. They wander around the middle of the board and they attack you as you get close or, sometime, because they just don’t like the look of you.

“They just add an extra level of threat and narrative to the game,” Latham continued, “and they’re just trying to get in the way of you achieving your objectives.”

In advance of the larger line of miniatures, Modiphius will first launch a two-player starter set. The $85 kit will include 18 pre-assembled plastic miniatures, including five Imperials, five Stormcloaks, three skeletons, three Draughr, and a Draughr Deathlord. Heroes will include Hadvar and Ralof, an Imperial Mage, Yrsarald Thrice-Pierced, and a female Dragonborn. Players will get a host of cards and tokens as well as a double-sided poster map, featuring the wilderness on one side and the interior of a Nord tomb on the other. They’ll also get all the rules for the more traditional Battle Mode and the more narrative Delve mode of play. 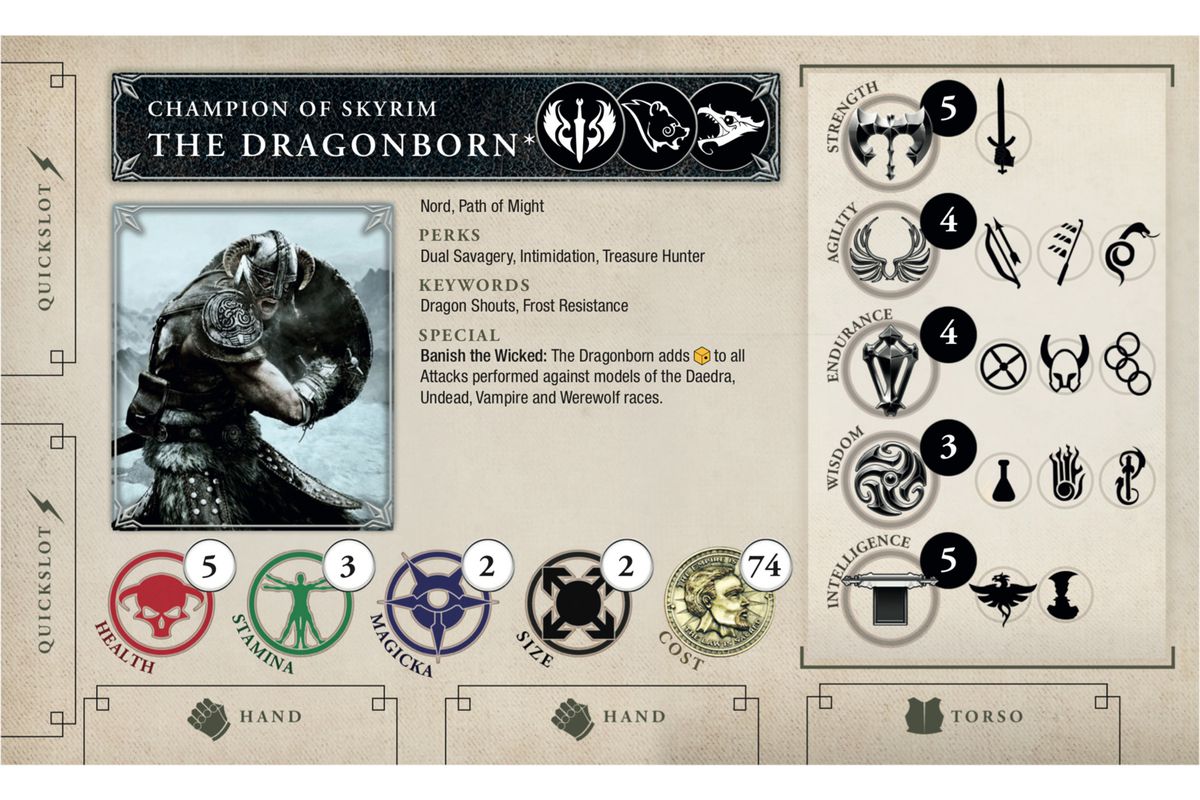 A sample of the sideboard used to control the Dragonborn hero.
Modiphius Entertainment

“Once you’re ready for adventure there’s 12 missions,” explained Birch. “It’s Battle Mode that sees you facing off against another player, with the AI adversaries as a tactical problem for both of you. Alternatively, players can go solo or team up with friends co-op in Delve mode to take a group of heroes or a full band of warriors on a raid to a Stormcloak camp, or deep in to a Nord tomb.”

Birch explained that, like Wasteland Warfare, missions will be linked and include chains of quests that will influence later missions.

“The concept with the campaign set is it lets you support a settlement,” Birch said, “maybe you’ll grow a village or perhaps raid a ruined fort to clear out the bandits and take it over for yourself. Over the course of several missions you’ll improve it’s defenses and resources, letting you grow your followers. Watch out though be sure to leave defenders in case you’re attacked whilst on a mission, and a series of narrative mechanics and campaign scenarios will take you test your skills as a leader.”

More durable, highly detailed resin editions of the models from the starter set will be available for the holiday shopping season.