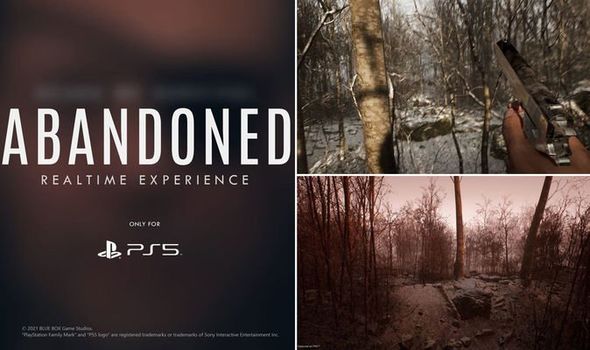 The Abandoned PS5 trailers app update was scheduled to launch earlier this week on Tuesday August 10, with the patch adding an introduction teaser for the mysterious survival horror game. Anticipation was high as there’s still so much PS5 gamers don’t know about the Blue Box Game Studios title, while rumours have persisted for some time that the PS5 exclusive is actually a new Silent Hill game in disguise. Blue Box has repeatedly denied this, but it hasn’t stopped the continuing speculation about Abandoned.

It had been hoped the Abandoned PS5 app’s introduction teaser would answer some of the lingering questions fans had.

But when the release time for the Abandoned update hit on Tuesday the patch was nowhere to be seen, with Blue Box explaining it had been delayed.

Now the Abandoned makers have gone into more detail about why the patch was delayed, and when fans can expect the update.

Blue Box said the Abandoned PS5 update had been delayed due to “multiple” engine issues that appeared at the last minute.

They added, however, that after testing work resolving the issue is “almost there”.

In a series of tweets Blue Box Game Studios said: “We ask everyone to calmly wait for the patch. We understand your frustration. We are 100% real and are working on a passionate game we believe in. This is what happened.

“We dealt with multiple engine issues that occured last minute after we spotted a graphical glitch. For that we wanted to do a quick update. We are almost there as most of the testing is completed.

“We would like to thank you again for the patience and apologize for the inconvenience.”

In a previous update Blue Box said that they wouldn’t be delayed the update for the Abandoned PS5 trailers app to a specific date.

Blue Box posted: “We are still working to resolve the issue we are facing. We wanted to remind you that we are a small studio without the wide resources to quickly resolve an issue.

“We want to deliver a highly polished product and a good representation of the game that functions as intended.”

The Abandoned PS5 trailers app – which has been dubbed the Realtime Experience app – will show what Abandoned looks like running on actual PlayStaton hardware.

Instead of using captured footage, it will allegedly run the game’s trailers on the PS5 itself.

So gamers won’t need to worry about video compression – what they’ll see is what the game actually looks like on the PS5.