Synthetic humans are a thing of the future, and the latest project to come along in pursuit of that is Alethea AI, a startup that can create photorealistic AI-generated avatars from a single photo. The company is unveiling its AI Avatar Studio today.

You can see what they did with my photo, with my permission, in the video embedded in this story. They made me sing the I See Fire song from The Hobbit film with Ed Sheeran’s voice. The company created the avatar and lip-syncing within minutes.

Alethea AI has created a platform for creating AI-generated media with the AI Avatar Studio. The goal is to create expressive and photorealistic avatars that people can use for their own purposes, like maybe attending Zoom meetings in their place that they don’t want to attend.

It’s one more building block in the road to the metaverse, the universe of virtual worlds that are all interconnected, like in novels such as Snow Crash and Ready Player One. (We’re doing a conference on the metaverse in January, if you haven’t noticed). While the metaverse has been the stuff of dreams and science fiction in the past, lots of companies are rushing to create it. And Alethea AI is doing its part, said Arif Khan, CEO, in an interview with GamesBeat.

“The value proposition is that they are expressive and emotive,” he said. “The characters look like real humans, but they’re not. They do and say whatever you tell them to. This opens new possibilities for content creation, storytelling, or customized interactive experiences.”

Above: Alethea AI wants to make it easy to create human avatars.

Typically these investments in content creation are worth the return as Lil Miquela has been able to land seven-figure brand endorsement deals from marquee advertisers like Samsung, Balenciaga, and Coach.

Alethea AI has an application programming interface (API) that it hopes will democratize content creation for creators and game developers to cost-effectively and rapidly create various types of digital media. Fundamental to Alethea AI’s ability to do this is its breakthrough in creating learning models that require a single 2D image or less to generate high-fidelity, expressive, and photorealistic avatars, said Khan, the former chief marketing officer at SingularityNet, an open-source platform for sharing AI tech.

Alethea AI’s API generalizes and reconstructs the model of an avatar’s face and upper body. Over time, the company hopes to extend this out to reconstructing the full human body with high-fidelity photorealism.

If it sounds familiar, Genies is doing a lot of the same thing, except with avatars that are more stylized, with non-photorealistic art, and Possible Reality is doing it for games.

Khan said Alethea’s approach differs from other synthetic media companies, as it does not require a human to upload training data or extensive video data to build upon. That creates significant efficiencies and faster iteration cycles in the content creation pipeline, he said.

Where blockchain comes in 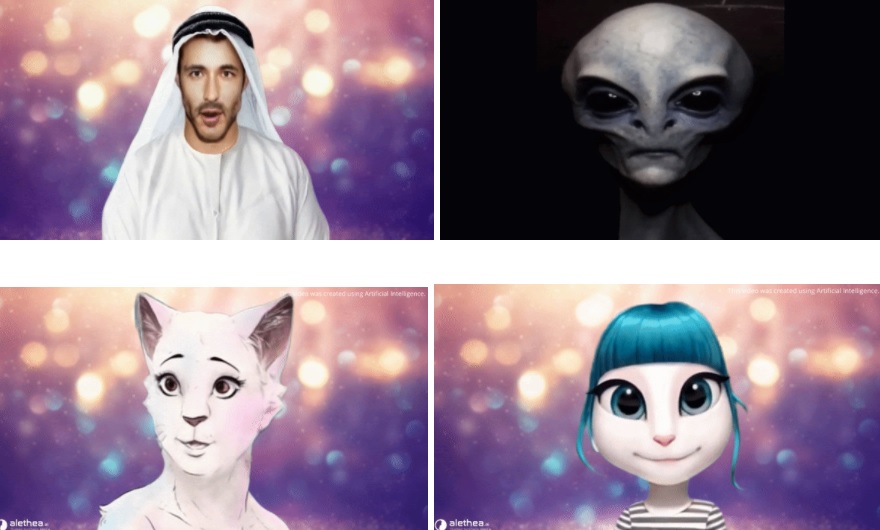 Above: Alethea AI’s avatars don’t have to be human.

With the platform, Alethea AI has woven in blockchain technology, the secure and transparent decentralized ledger, so that it can establish who owns a given avatar. By using blockchain, Alethea AI will eventually enable you to take your avatar from one game or app to another.

Alethea AI is using non-fungible tokens (NFTs, which are similar to the CryptoKitties technology) to uniquely identify items, in this case avatars, that can be owned and bought or sold. You can get access to your avatar in some games if you contribute to the game’s economy by spending money in it, Khan said.

All of this makes it simple to create avatars quickly and use them for different applications that can generate money for the user or whoever hosts the technology, such as a game developer.

There are definitely obstacles, such as the fact that the metaverse — which would be a universe of connected worlds — isn’t here yet and so the utility of the avatars is uncertain. The trick is that it could take a lot of computation to do everything required to convince someone that the avatar is real, and that’s not going to be easy with real-time applications. The company could also run into trouble with people with ill intent, such as those who would create “deep fakes” of other people.

But Alethea AI is one of the first companies to gain access to Open AI’s API, which means that foundation has approved the use of its technology in this case. So far, Alethea AI is helping to test Open AI’s technology, and it has not yet activated any AI Avatars powered by Open AI’s API. Khan is hopeful that Open AI’s GPT-3 technology, which is Open AI’s language generator, can be used to create avatars that can hold conversations with people forever without giving away the fact that they are AI characters.

As you can see from the video, the company is still working on things like proper lip-syncing. If there are flaws in the likeness, it may have to do with the fact that the bones in someone’s head aren’t faithfully reproduced, and that can throw the likeness off. The connection to the rest of a body is also artificial, for now. Alethea AI’s tech is analogous to taking someone’s face and putting it on a video of a person.

There are some safeguards. If someone creates a “deep fake” of you and gets you to spout hate speech, Alethea AI can detect that and block the speech, Khan said.

Khan started putting a team together last December for Alethea AI. The goal was to take the breakthroughs that AI is doing for things like automatic text generation and applying them to video, for the automatic creation of photorealistic and believable humans.

They created a machine-learning technique dubbed “single-shot image synthesis,” which allows them to rapidly create avatars from one photo. The avatars can be expressive and speak up to 40 different languages.

“Artificial intelligence can create 100% fictional characters, with bodies, faces, and voices,” Khan said. “It works with any faces, including non-human ones, as long as there are discernible eyes and mouths.”

Alethea AI wants to create a marketplace where it can sell or just generate characters. The company created an image that blended Donald Trump and Joe Exotic together, and it got picked up as an internet meme.

The company raised a small funding round to get started, but it plans on doing a seed round in the coming months.

Khan wants the company to eventually get to real-time avatar expression and lip-syncing. That’s the really hard part. But Khan thinks the journey will be worth it.