Almost out of nowhere, Apple is poised to be a major force in mainstream gaming. It’s doing it in its own Apple way, too—not by chasing down the graphics-intensive blockbusters so popular on devices like the Xbox One and PlayStation 4 (or even the PC), but instead by positioning its upcoming Apple Arcade service as a hub for remarkable and tightly focused games that often get mentioned in discussions of whether games are art.

It’s quite the turnaround. Last year I would have laughed if you’ve have told me we’d be at this point today.

Apple all but stated this was its goal during its March reveal of Apple Arcade, but back then it still looked like an iffy prospect. The ability to play games where you left off on everything from the Mac to the iPhone and Apple TV sounded wonderful, but it looked as though the latter two devices were going to remain saddled with the awkward MFi (Made for iOS) controllers that don’t always support all of a game’s inputs. 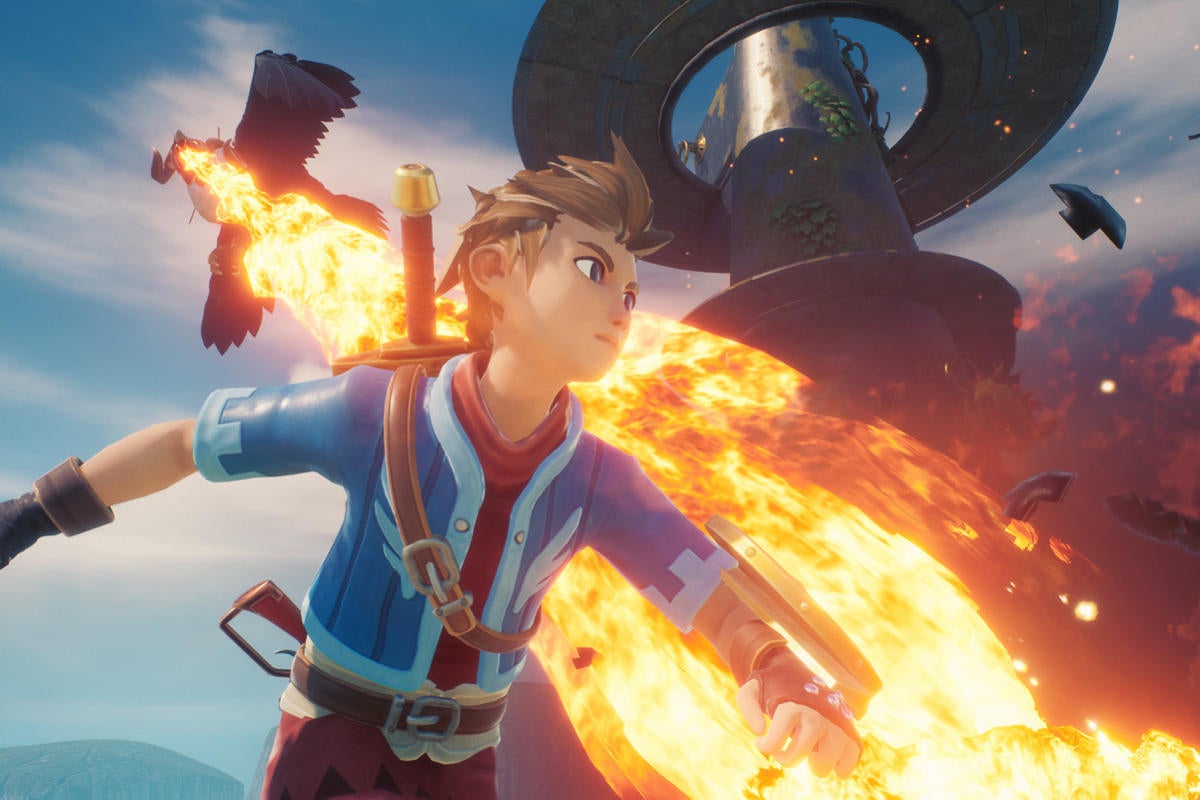 A shot from Apple Arcade’s upcoming Oceanhorn 2: Knights of the Lost Realm.

After WWDC, though, Apple has all the right pieces in play. It’s partly funding some of the games in Apple Arcade. It officially announced Project Catalyst, which will allow the same apps to work across the iPhone, the iPad, the Mac, and possibly Apple TV. It’s lifted most of the restrictions that kept games out of Apple’s walled garden for years, most notably by announcing support for wireless Xbox One controllers and Sony’s Dual Shock 4 for the PlayStation 4.

Suddenly, every Apple fan is about to be in a position where they don’t even have to buy something new in order to have a major gaming system in their home. Suddenly, for that matter, it’s clear that Apple has several advantages that could make its platform stand out in an established gaming market.

For one, Apple Arcade won’t force Apple to venture into relatively alien territory, as it’s having to do with Apple TV+. Instead, it’s leaning into the kinds of graphically minimalistic, critically acclaimed, virtually stunning, and short indie games that already account for most of the accolades for iOS—or as I like to call them, “art house games.” It’s great timing, too. Indie games have been becoming mainstream for this entire decade, and publishers such as Devolver Digital and Annapurna Interactive sometimes even manage to steal some of the thunder away from giants like Ubisoft and Electronic Arts.

Apple claims that Apple Arcade will feature “incredibly fun gameplay and immersive stories, while capturing imaginations with original art and music,” and it will benefit from Apple’s generally commendable curation system. But the Apple Arcade games that Tim Cook showed off in March don’t look all that different from paid games that consistently feature prominently in the App Store’s gaming sections—games like Alto’s Odyssey, Prune, Old Man’s Journey. Even indie games that started life on proper consoles like Bastion, Limbo, and The Witness now thrive on iOS in part because they fit into Apple’s gaming aesthetic and culture so well. The situation isn’t all that different on the Mac, which may not get graphically complex games like Sekiro but almost always gets the experimental, artful indies ranging from The Banner Saga and Dead Cells to Firewatch and Stardew Valley. (I imagine this is partly thanks to a happy accident, as it’s simply easier to port these kinds of games to the Mac).

It all makes for a uniquely “Apple” gaming platform, considering the Cupertino company’s long associations with art and good design. Apple would just be legitimizing the positive associations critics tend to have about iOS games while tastefully distancing itself from microtransaction-heavy free-to-play games.

Apple Arcade’s big advantage is that it allows Apple to gather these types of critically acclaimed, relatively minimalist and thoughtful games into one convenient hub. Outside of iOS, playing such games at launch typically requires heavy financial investments into expensive systems that are made to handle more loud and complex games, such as the PlayStation 4 or even the PC (or Mac). For that matter, you generally have to know what you’re looking for in order to find such games among the louder and heavily funded titles on established platforms, but Apple Arcade’s curation would likely place them front-and-center.

Annapurna Interactive is contributing to Apple Arcade, which is a great sign.

The Nintendo Switch is probably the system that comes closest to this ideal at the moment thanks to its embrace of indie games and its proof that players generally want a good game over jaw-dropping advanced graphics. Alas, the Switch store is already getting crowded with chaff. Importantly, though, Apple Arcade will run on a single subscription that will allow you to play any of its 100-plus games at any time, while on the Switch you still need to buy each game individually. 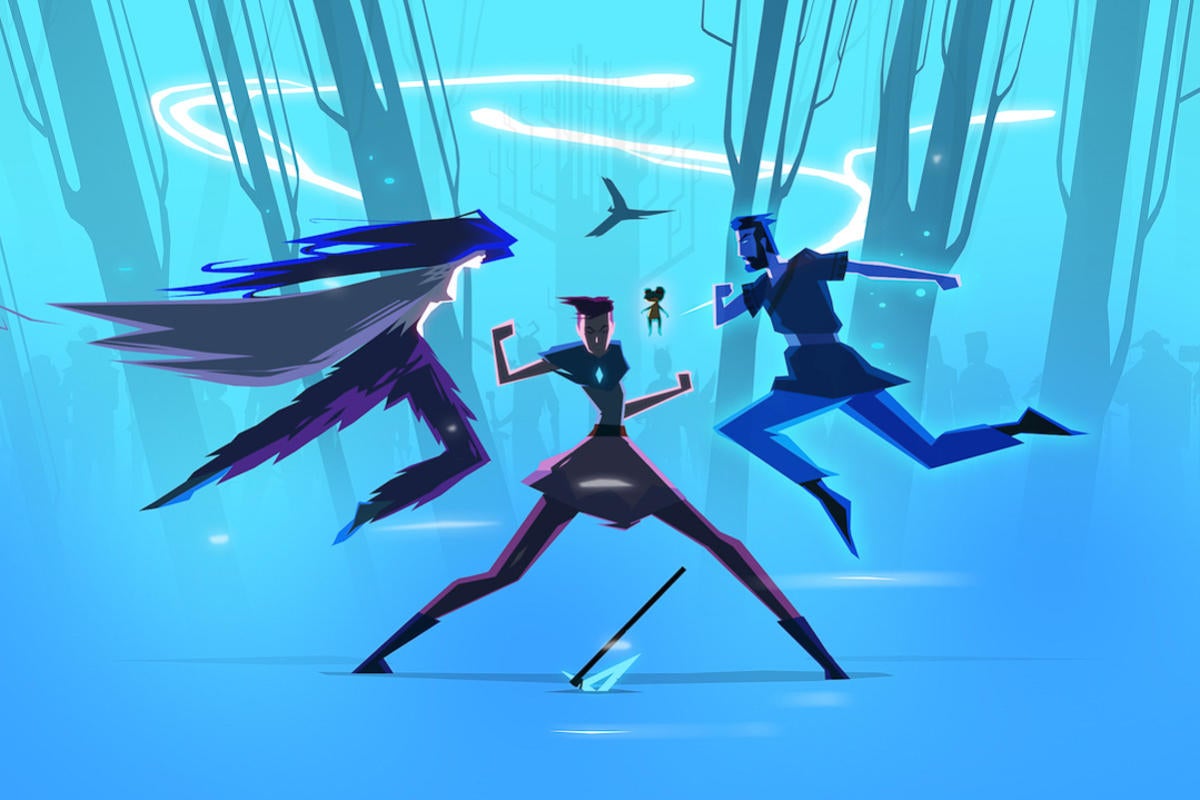 Atone: Heart of the Elder Tree is one of the hand-drawn puzzlers that will be coming to Apple Arcade.

But perhaps more importantly, it would be the go-to hub for folks who prefer short but memorable games in the vein of Donut County. It’ll be a game platform for people who want their gaming experiences to be as focused as a good documentary or TV episode rather than drawn out over 100 hours in sagging RPG plotlines. Put another way, it’ll be a platform for people who entirely see gaming as a hobby rather than a lifestyle. Increasingly, I believe I’m a member of that camp. And again, it’s an approach that will work for Apple because so many of iOS and Mac gaming’s standout titles fit that description.

Apple talked a lot about its approach in its March presentations, but it’s hard to overemphasize how much Apple’s upcoming support for Xbox One and PS4 controllers changes the game. (In fact, I’m willing to believe that some Apple Arcade developers refused to get involved unless Apple extended this support.) From a developer standpoint, it makes Apple Arcade more attractive because full controller support means they can design with more traditional gaming systems in mind. After all, Apple’s exclusivity deal apparently only extends to mobile games and subscriptions. That means you won’t be able to play an Apple Arcade game on Android, but you might be able to find it on Steam or the digital stores for the Nintendo Switch, Xbox One, or PlayStation 4 (although you probably won’t find the games offered on subscription services like PS Now). If Apple Arcade turns out to be popular—and I’m convinced it will with the newly announced changes—then it’s generally a win for developers. And since Apple says it’s partly funding some of these games, it’s possible we’re on the verge of seeing the indie gaming scene flourish more than it does now. 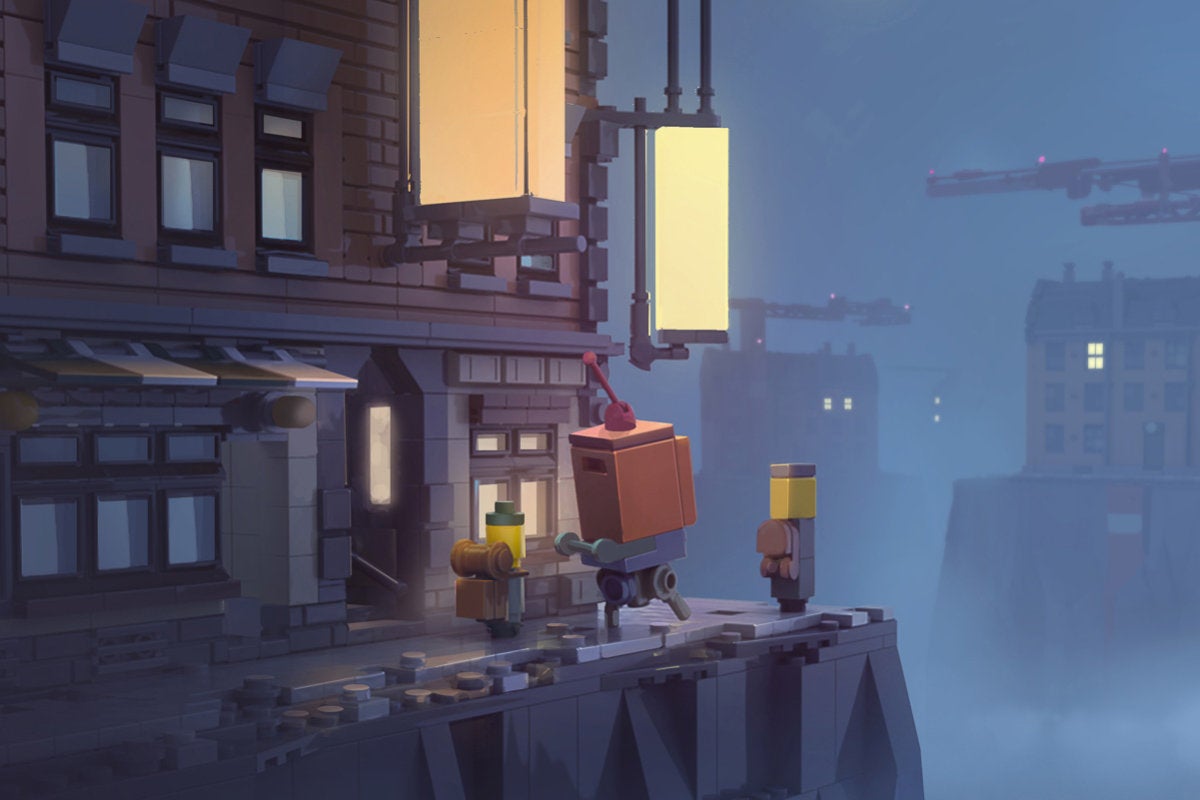 Fittingly, one of the games coming to Apple Arcade is called Lego Arthouse.

From a consumer angle, it means that anyone who already has an iPhone, iPad, Mac, or Apple TV already has enough in their home for an Apple Arcade gaming “system,” especially if they already have an Xbox One or PS4. This new approach also means they won’t need to carefully choose the best MFi (Made for iOS) controller that will work with all the button prompts in a particular game. And since you can reportedly pick up an Apple Arcade game from where you left off on any of the aforementioned devices, you’ll essentially have a more portable gaming system than what you get with the Nintendo Switch. Aside from your iPhone or iPad, the only thing you’d need to bring along on a trip is a controller. Heck, even the Apple TV 4K isn’t all that heavy.

On that note, Apple Arcade’s advantages over Google’s upcoming Stadia service seem clearer in the wake of both companies’ announcements last week. The goals of each service are a little different, but Stadia helps illustrates the strength of Apple’s approach. Stadia’s vision of letting people play graphically intensive games with nothing more than a Chrome browser is admirable (and it works better than I would have expected), but a lot of the current U.S. infrastructure for the internet still can’t properly handle it. As PC Gamer pointed out last week, playing a Stadia game at 4K will eat up 1TB of data within just 65 hours.

As with Apple Arcade, Stadia offers a subscription ($9.99/month), but it will only give you a handful of free games, much like services like Xbox Live. Generally, you’ll be expected to buy the games individually. All this is aside from the fact that Stadia isn’t focused on what I called “art house” games—instead, it’s highlighting the ability to play graphically complex ones like Assassin’s Creed Odyssey, Doom, and the newly announced Baldur’s Gate 3. 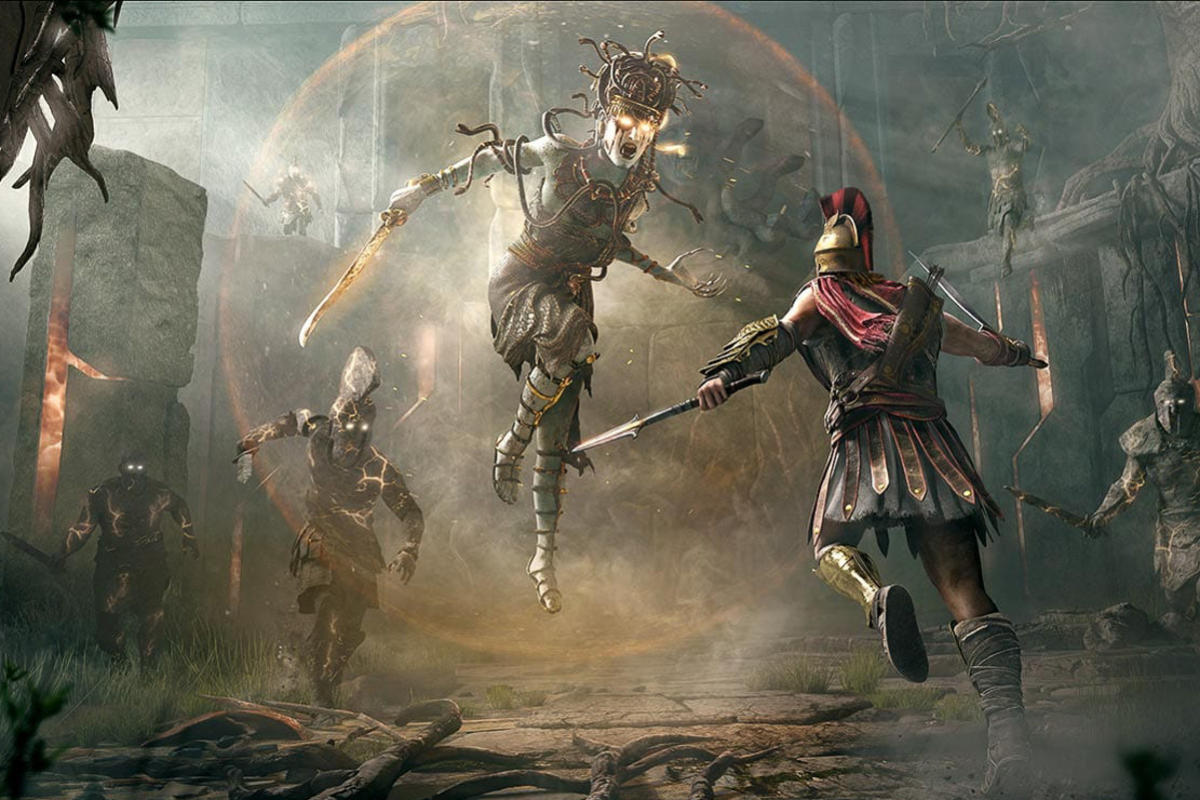 Yeah, don’t be expecting this kind of thing from Apple Arcade.

With Apple Arcade, you’ll only need to have an iPhone, iPad, Mac, or Apple TV—and preferably a controller. You can download any Apple Arcade game for offline play, so you don’t even need an internet connection while you’re playing the game. (For that matter, their files sizes are likely to be small, much as many indie games already are on iOS). You don’t even have to buy the game separately: You’ll be able to download them all, if you wish, and try them out so long as you have a sub. If you don’t want to invest in a heavy-duty gaming system and don’t have the time (or desire) to play gaming’s hours-long blockbusters, Apple Arcade strikes me as the better deal. It fills a niche that’s needed to be filled for a long time. If you’ve heavily entrenched in Apple’s ecosystem and have some love for gaming, it’s a no-brainer.

Some big questions remain. We don’t know how much an Apple subscription will cost, for one, and we haven’t seen how many Apple Arcade games will play. For all we know, a lot of them could be garbage (although the list of supported games suggests Apple is heading in the right direction). But the outlook looks good.

For unknown reasons, Apple is suddenly becoming friendlier to games, first by allowing remote streaming apps on iOS such as PS4 Remote Play and Steam Link, and now allowing players to use some of the most common game controllers on the market. It’s all been paving the way for an enthusiastic launch of Apple Arcade. The way things look now, Apple Arcade may end up being one of Apple’s best powerups for its push into services.