What was once an April Fool’s gag is now an actual, real, honest to goodness card game set in the same fictional universe as Arkham Horror.

Earlier this year, Fantasy Flight Games issued a press release for a fictional expansion to an equally fictional game. Called Barkham Horror: The Dogwich Legacy, it showcased a world where people and monsters have been replaced by dogs and cats. It was clearly fictitious, but there was a LOT of work put into it, including a whole bunch of fake characters and cards.

At the time it was just an elaborate joke. Then, Fantasy Flight Games became inundated with emails from customers eager to purchase what was supposed to be a fake game.

“The response from you, our fans, was incredible; and you asked, nay, demanded that we make this product,” writes Fantasy Flight in today’s release. “Well, we listened, and today we are proud to announce Barkham Horror: The Meddling of Meowlathotep, a 100% real, playable standalone adventure for Arkham Horror: The Card Game.”

That’s right: Barkham Horror is now a 78-card standalone scenario pack where you play as a doggie investigator trying to stop a cat cult from destroying the city of Barkham and the rest of the world along with it.

The only card that looks like it made its way to the finished product is the Boneyard, but it still looks like the overall theme of the joke was kept intact with all the actual cards that are included in The Meddling of Meowlathotep. SQUIRREL! and Spiked Collar are both particularly delightful cards that you’ll soon be able to play in real-life.

There are also at least 5 all-new investigators to choose from, including Bark Harrigan, the Dog of War; “Skids” O’Drool, the Pen Escapee; Kate Withpup, the Laboratory Labrador; Duke, the Good Boy; and Jacqueline Canine the Paw Reader. 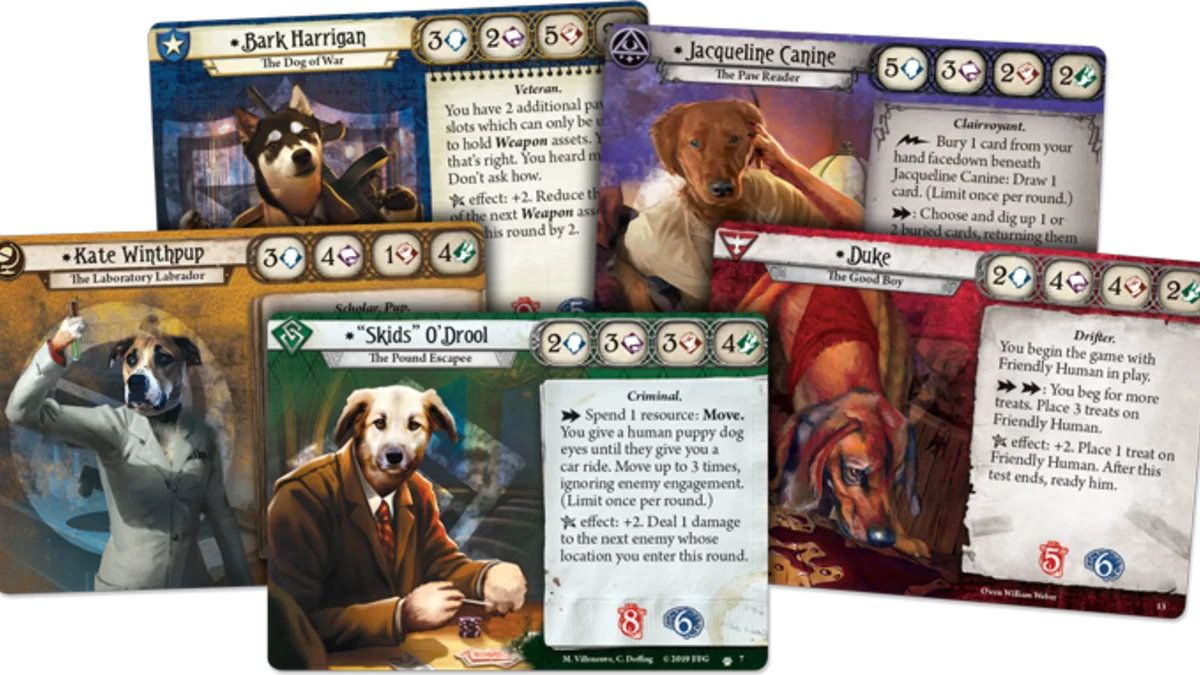 Barkham Horror: The Meddling of Meowlathotep is available now at fine games retailers for $19.95.