When Ubisoft dropped Assassin’s Creed: Origins back in 2017, it represented a paradigm shift in how they designed their premiere franchise. In a shift from past games, Origins plunged the series deep into offering a full-blown RPG.

This worked to great success as the game produced a better debut performance than its predecessor. It was popular enough that Ubisoft took things even further into the RPG realm with Odyssey, which scored even greater sales.

But which game is the best? What if the answer was neither or, more likely, both? For this list, we’ll be looking at both games and deciding all the ways either game managed to one-up the other.

Updated by Juliet Childers on September 27th, 2020: With recent revelations about how Ubisoft management approached making AC games more inclusive, many fans have been re-examining and replaying games either to find issues or just to relive the epic tales. Both Origins and Odyssey offer rich worlds with RPG-like aspects blended with the assassin mechanics. Which one players prefer may come down to something as simple as whether they prefer ancient Egypt or Greece. 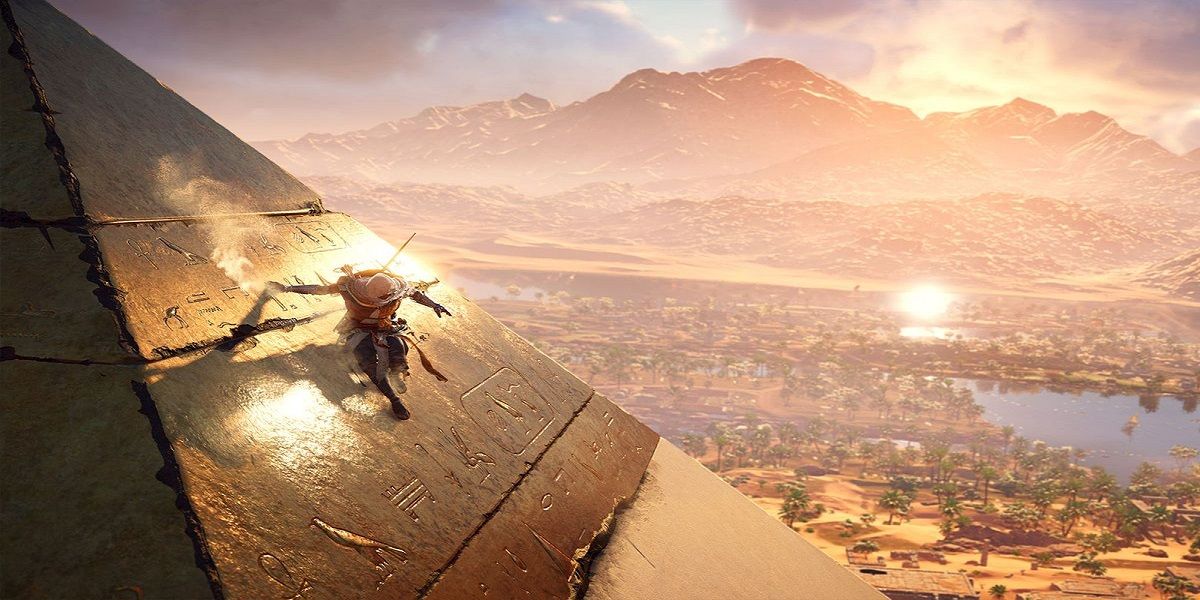 By and large, fans agree that Ubisoft’s games are positively gorgeous. For the majority of the more modern generation of games, the developers have created some of the prettiest cities and environments for players to spend hours of their time in.

Odyssey is no exception, as Ubisoft brings Greece to life in stunning detail and realistic extrapolation that deserves as much effusive praise as Horizon Zero Dawn and any Uncharted game. However, many fans found something special about being able to explore Egypt specifically.

Having Bayek walk or ride a camel across the golden sands of the Egyptian desert, exploring the game’s giant pyramids with incredible graphical detail — this is an experience only available in Origins. 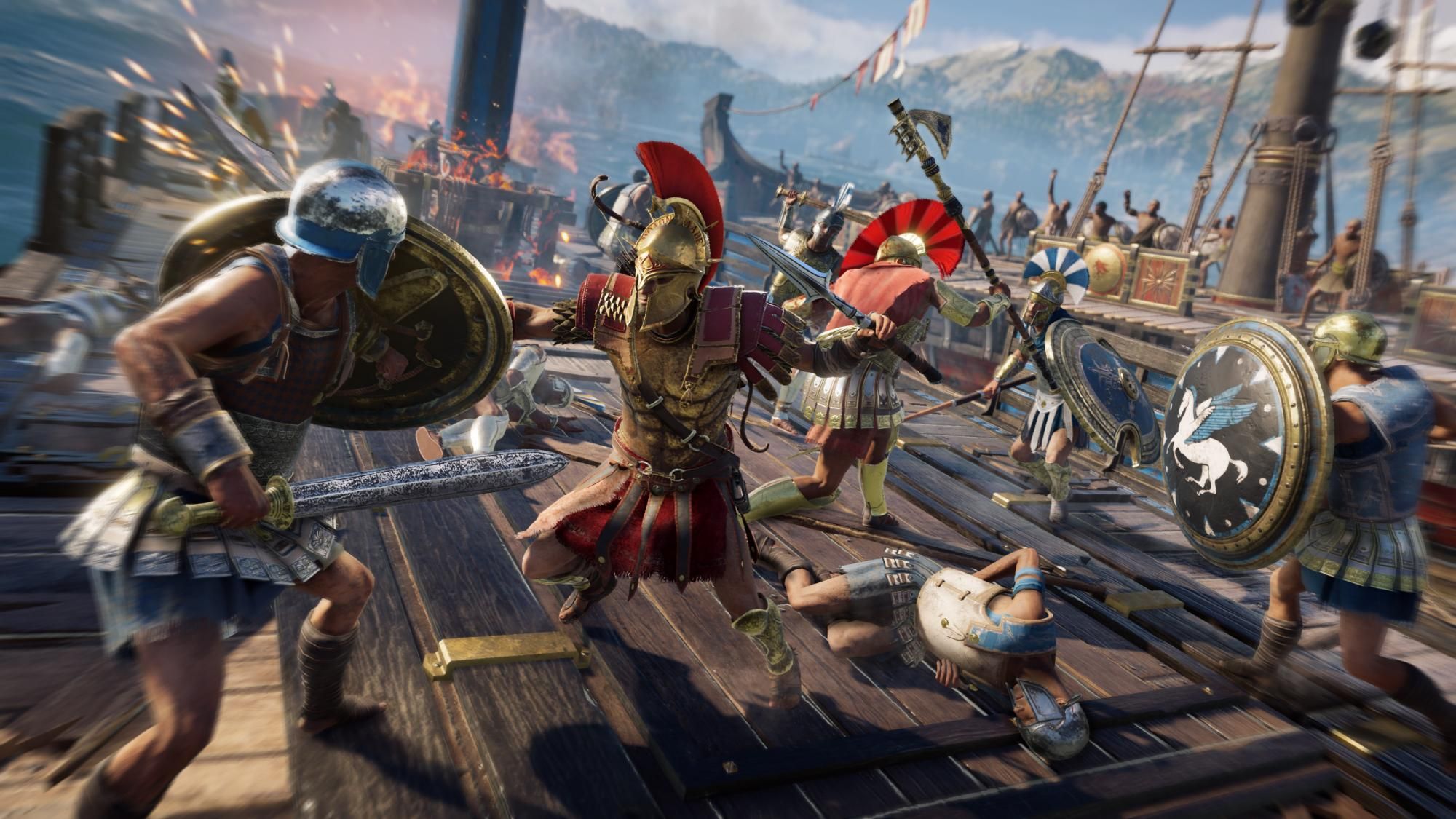 Some fans of the series found it frustrating to see assassinations take a back seat in a game where the character is supposed to be an assassin. that doesn’t mean there aren’t other areas Odyssey doesn’t excel at when it comes to combat. The Misthios and their trusty Spear of Leonidas are capable of some incredible things, making combat vastly more enjoyable.

While Bayek’s story is him working towards eventually forming the order that becomes the Assassins and as such has more realistic combat that focuses on the hidden blade, the Misthios gets to teleport around the battlefield and fire off a dozen explosive arrows at once. 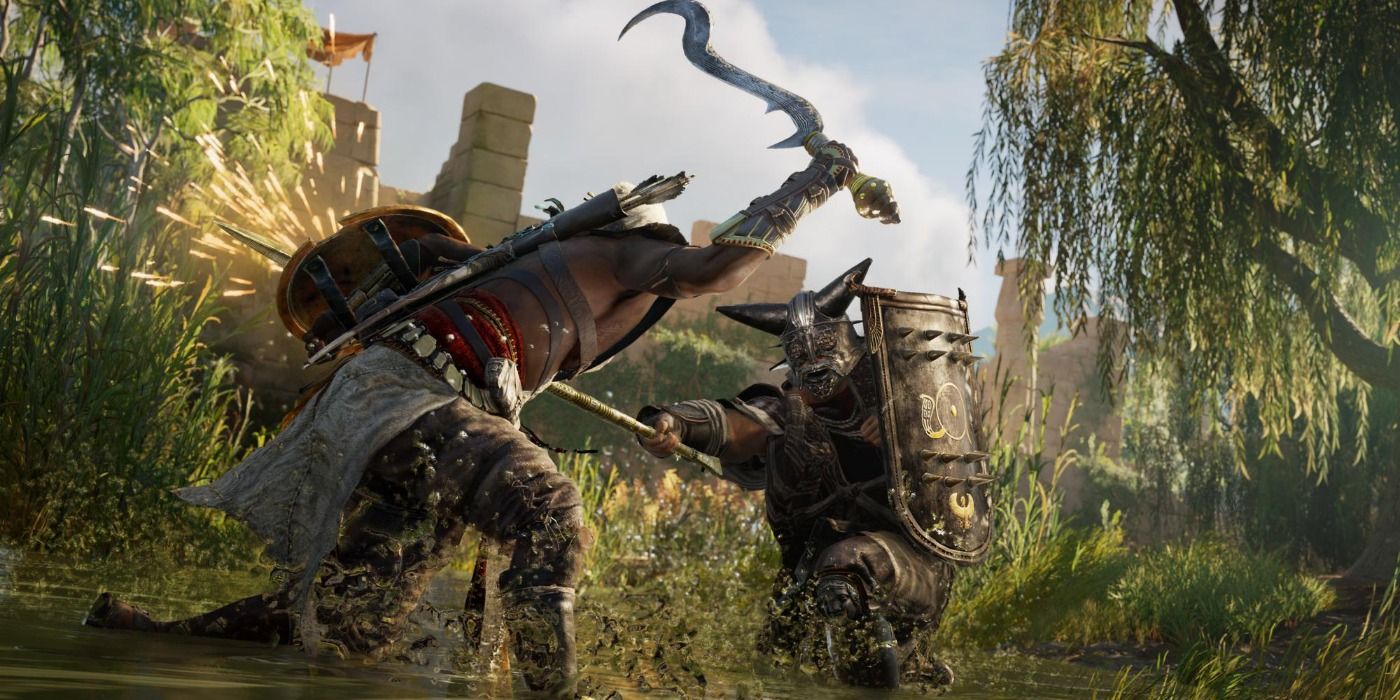 On top of some super over-powered enemies mentioned later on this list, some of the combat in Odyssey feels a bit unbalanced at times. For instance, the quests that involved hunting epic beasts sometimes felt grind-y and just not fun.

In contrast, many fans feel that combat in Origins just feels right across the board. Main points of pro-Origins include the shield system and the sheer amount of time the developers dedicated to the fine-tuning of combat in the game. 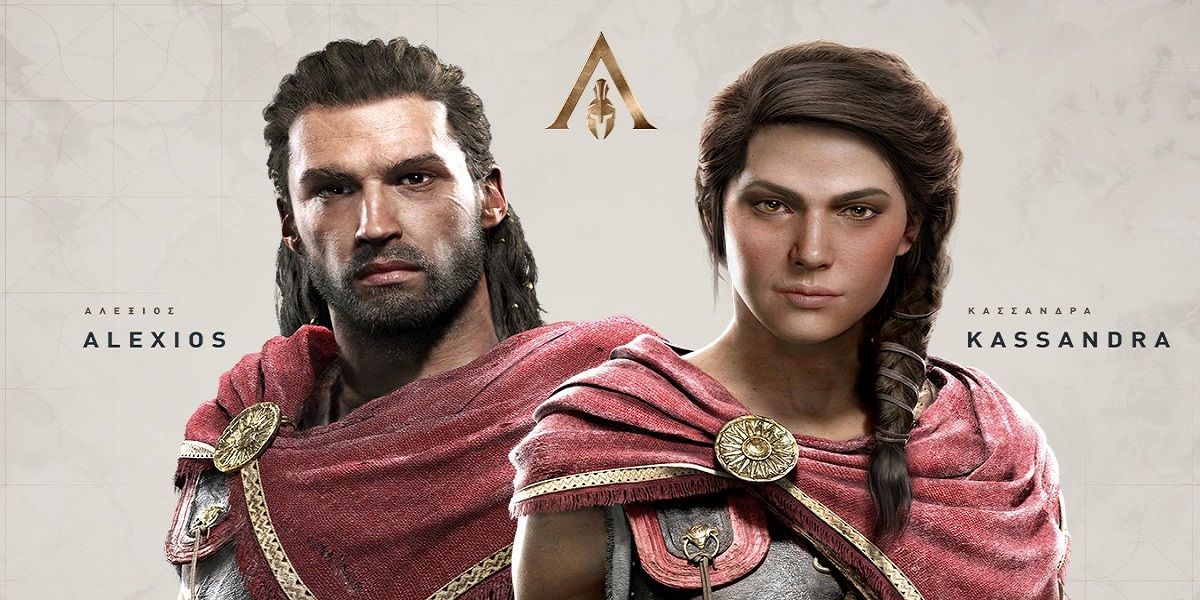 After years of poking at Ubisoft about the lack of a female assassin, they finally gave us Evie Frye in Assassin’s Creed: Syndicate. But Evie was merely a co-star, while Kassandra got to have the game to herself. At the beginning of Odyssey, players were given an option to choose between siblings Alexios and Kassandra to lead the game.

Fans also recently learned that she was meant to be the sole protagonist of the game originally. Other sources also claim that Aya was meant to have much more screen time, but that didn’t pan out either.

While it isn’t quite the same as being the only lead protagonist, Kassandra does lean into Ubisoft’s “play our games your way” philosophy, offering as much freedom to each player as possible. 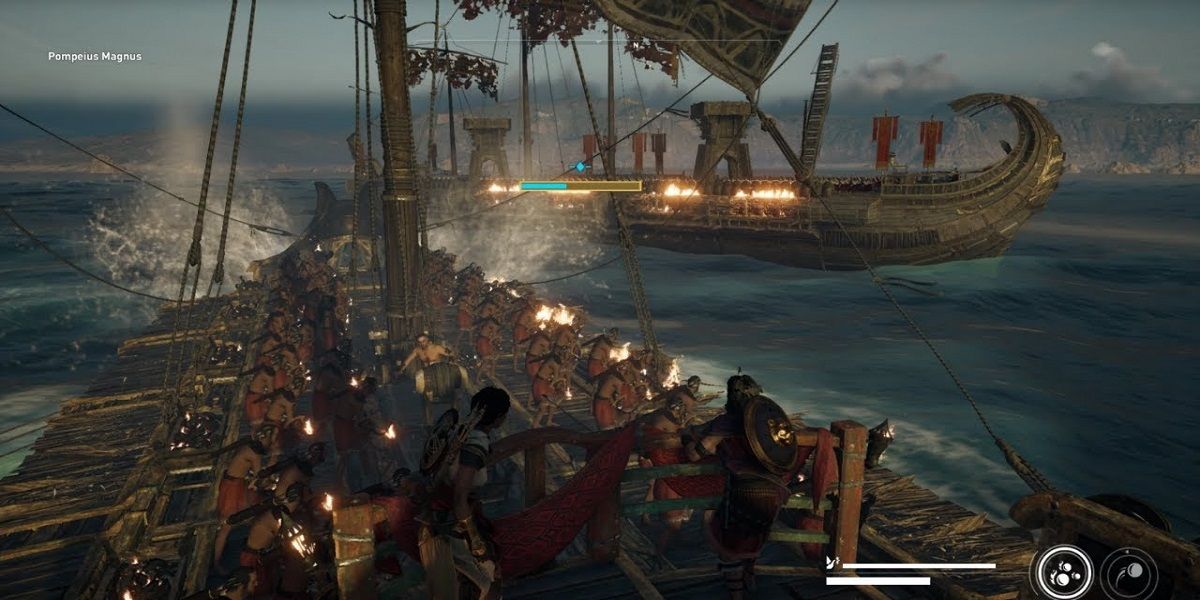 Ship combat is something players have wanted to come back since they experienced it in Assassin’s Creed: Black Flag. But when it finally did come back, the way it was used left a little something to be desired. Thanks to Odyssey’s level scaling, the Adrestia never really feels stronger than any other ship out on the seas.

That means players have to really know the intricacies of ship combat to dominate, especially when, more often than not, the enemies are traveling in groups of two or even three. Fans found that they’ll often have to finish off multiple ships…or die horribly. 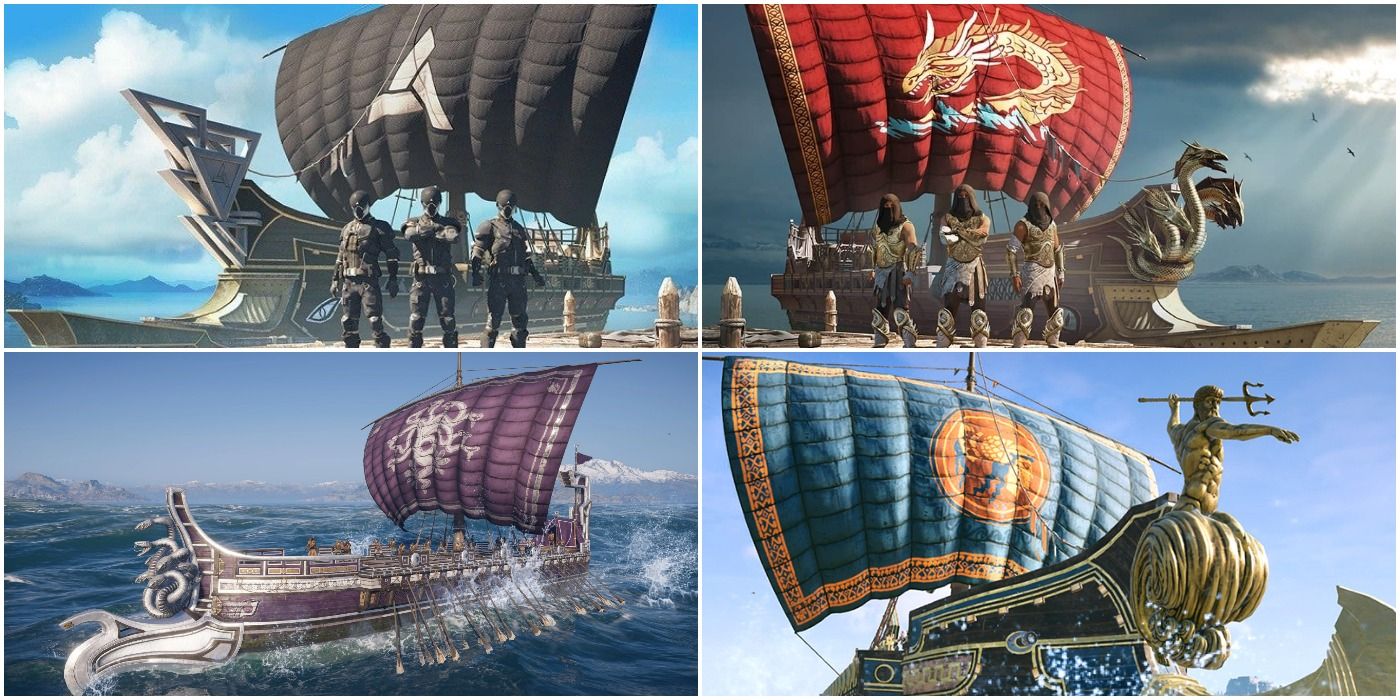 Speaking of ships, though some fans didn’t care for the combat, they did find the many skin selections slick and compelling. With new skins showing in the store and plenty to earn in-game just by playing the story, everyone could strike fear into the hearts of their NPC enemies with an intimidating masthead.

But that wasn’t the best part of sailing all around the Mediterranean. Fans fell in love with all of the different crew options and the sea shanties they sang — in Greek. There are plenty of YouTube compilations out there for fans, too. 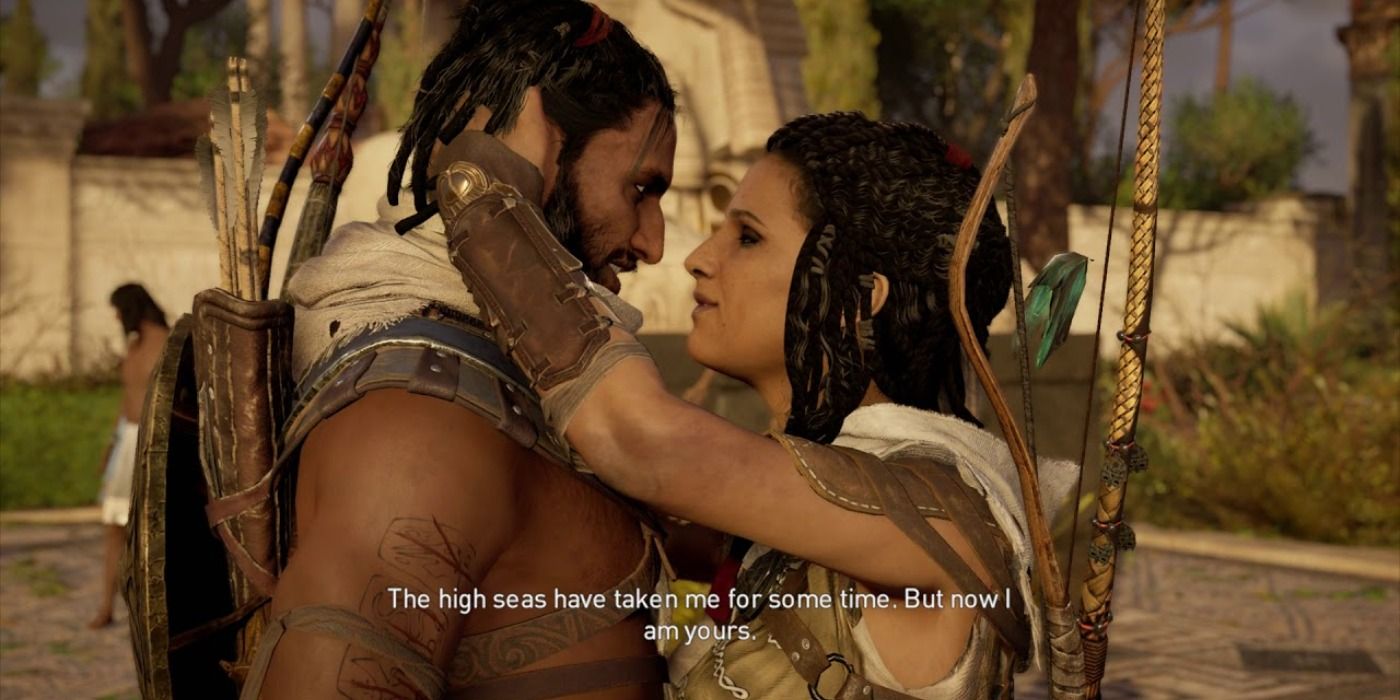 The Assassin’s Creed franchise was never too big on sweeping romantic storylines. But Bayak and Aya gave fans a love story for the ages. It was also, sadly, tragic and surrounded by heartbreak.

Despite how amorous one could play Alexios or Kassandra in Odyssey, there wasn’t a dedicated romance option like you might see in a Bioware game. Along with the darker plot points in Origins, its sweeping tale of forbidden love enhanced the stakes and made Bayek all the more real to players. 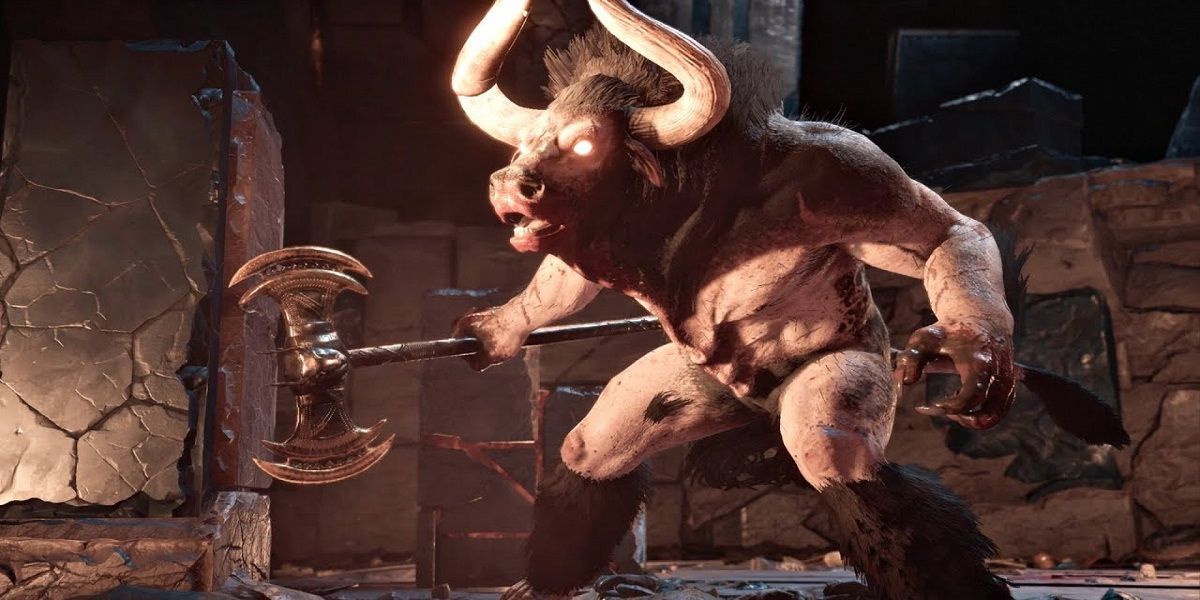 For the most part, the boss fights in Assassin’s Creed: Origins are pretty basic, likely because the game is still emphasizing assassinations as a key way to end fights. There might not be a point in dedicated time and resources toward creative villains if someone can just sneak up and stab them.

Whatever the reasoning, the bosses in Odyssey blow the ones in Origins out of the water. The willingness to go more fantastical leads to players getting to fight gigantic boars, stag deer, and bears…and that’s before things go down the path of fantasy.

Without spoiling much, if a player ever wanted to feel like they were the lead in Clash of the Titans, Odyssey is an experience they’ll never forget. 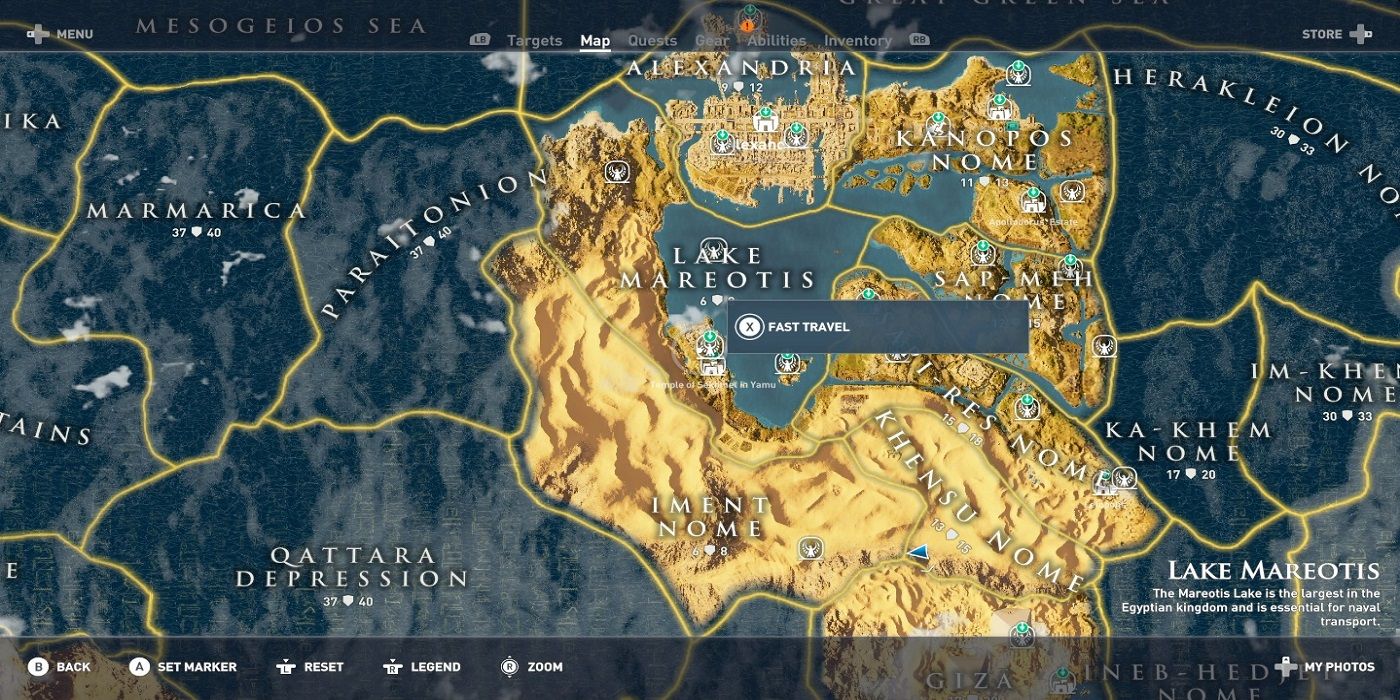 One of the greatest joys of RPGs is the sense of progression. Being able to go out into the world, handle various quests before returning to older areas to overpower opponents which were once a handful. It’s why there are so many people who enjoy grinding in RPGs, as people love the power fantasy. Odyssey, unfortunately, removed that aspect, making it impossible to ever be stronger than two levels over your opponent.

Though this was eventually changed as a “difficulty option,” it’s still nowhere near as enjoyable as Origins‘ different zones that are locked to a specific level range. Hopefully, in future AC games, they’ll decide to stick with Origins’ way of handling things, as this was a frequent complaint of even staunch Odyssey supporters. 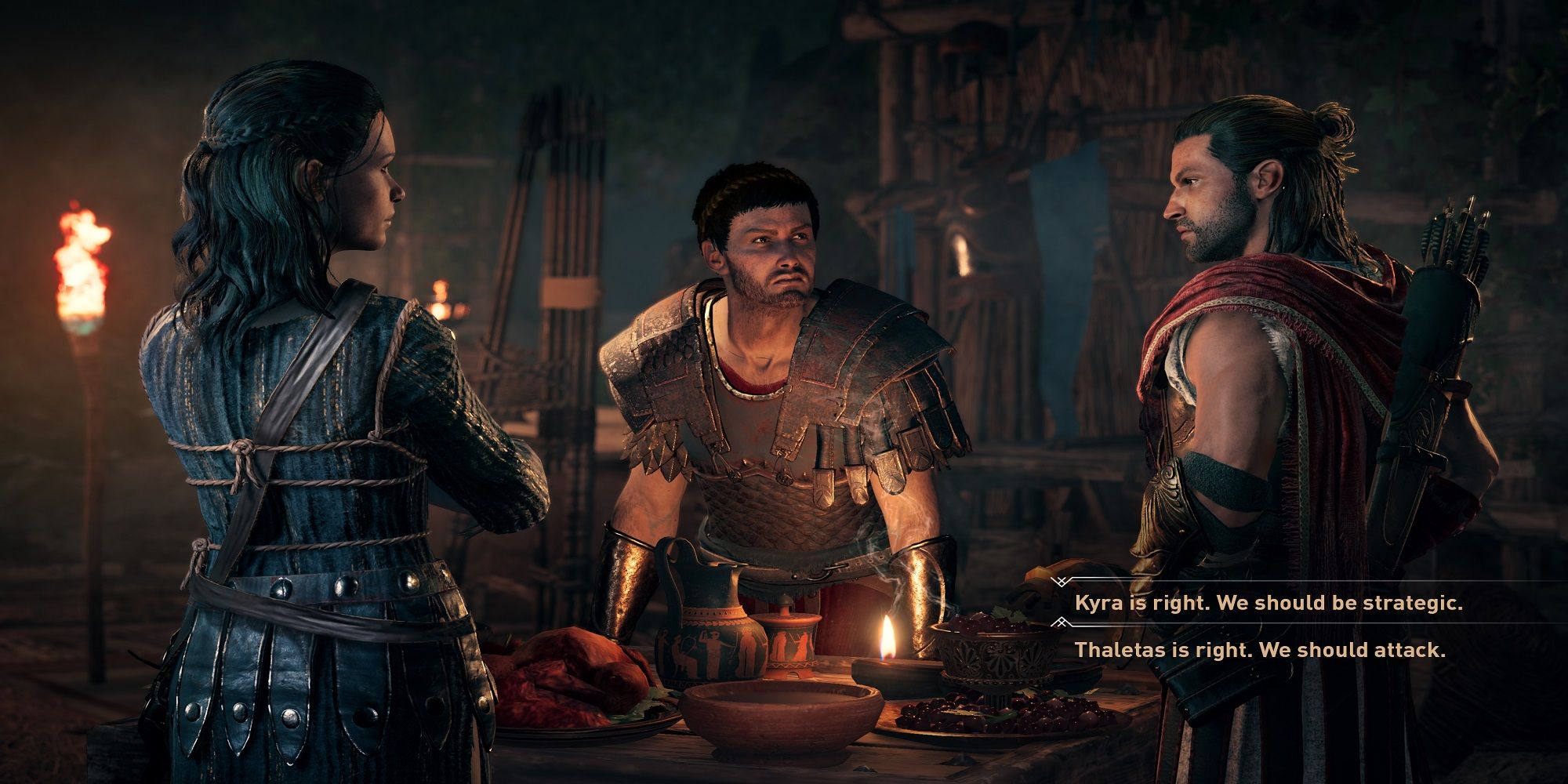 The Misthios’ dialogue options were a bit polarizing when this game was first announced. Some saw them as a poor substitute for proper RPG dialogue, while others thought it was straying too far from the original vision of the franchise. Ultimately, Ubisoft managed to walk the tight rope, giving us a character that was defined with a very clear beginning, middle, and end to their story.

Since players were given options on how to react, it allowed them to make the character their own, responding to different situations with compassion, rage, or indifference, depending on how the player themselves would react. 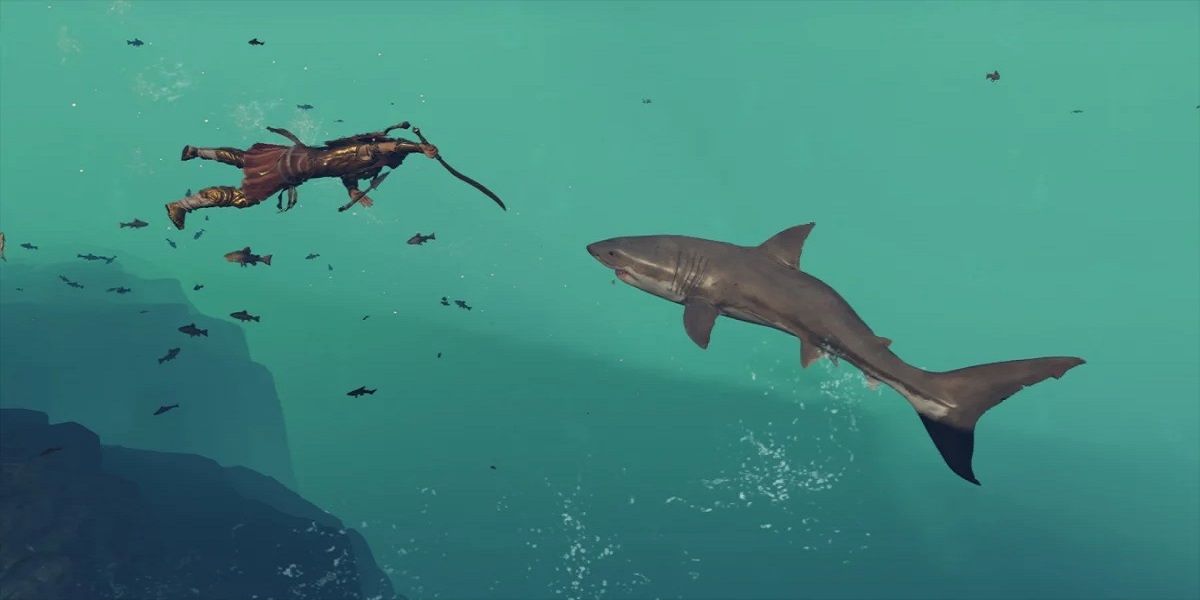 It’s true that Origins has its flaws, but if there is one thing it has over Odyssey, it would be the lack of sharks. While the waters of the Mediterranean Sea have never looked more beautiful than in Odyssey and the additional sea life like whales are certainly welcome, the sudden addition of predators is significantly less so.

From the moment players take on the quest “Shark the Vagrant,” they’ll have to deal with these dangerous obstacles. Even more annoying is that somehow they’re always congregating around any undersea treasure, meaning players either have to become sharpshooters with the bow or learn to avoid all the sweet sunken treasure…and abandon hope of earning the Platinum. 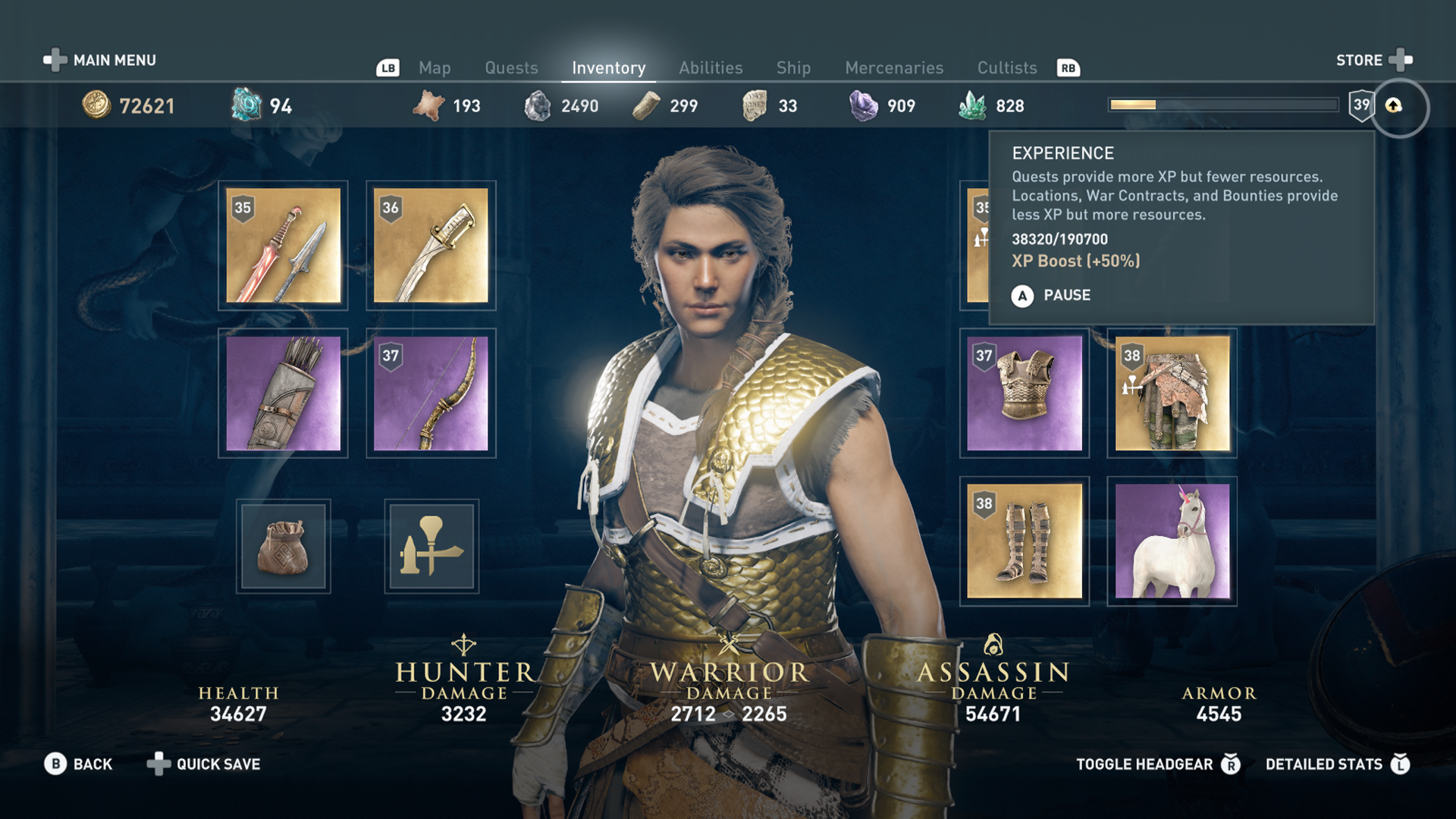 Assassin’s Creed Origins felt like more of a progression from Syndicate, which already began to embrace the idea of the series becoming an RPG. But a large part of an RPG is the ability to customize the lead character, not just physically but their combat couture as well. In Origins, Bayek was given a number of different looks, but they all did the same thing.

Odyssey tosses that and has classic RPG equipment – chest, leg, arm, and headpieces – which grant different bonuses. There’s the usual junk loot that’s found everywhere, but the game also allows for quests that help players attain specialized sets, rather than the palette swap costumes for most of Origins. 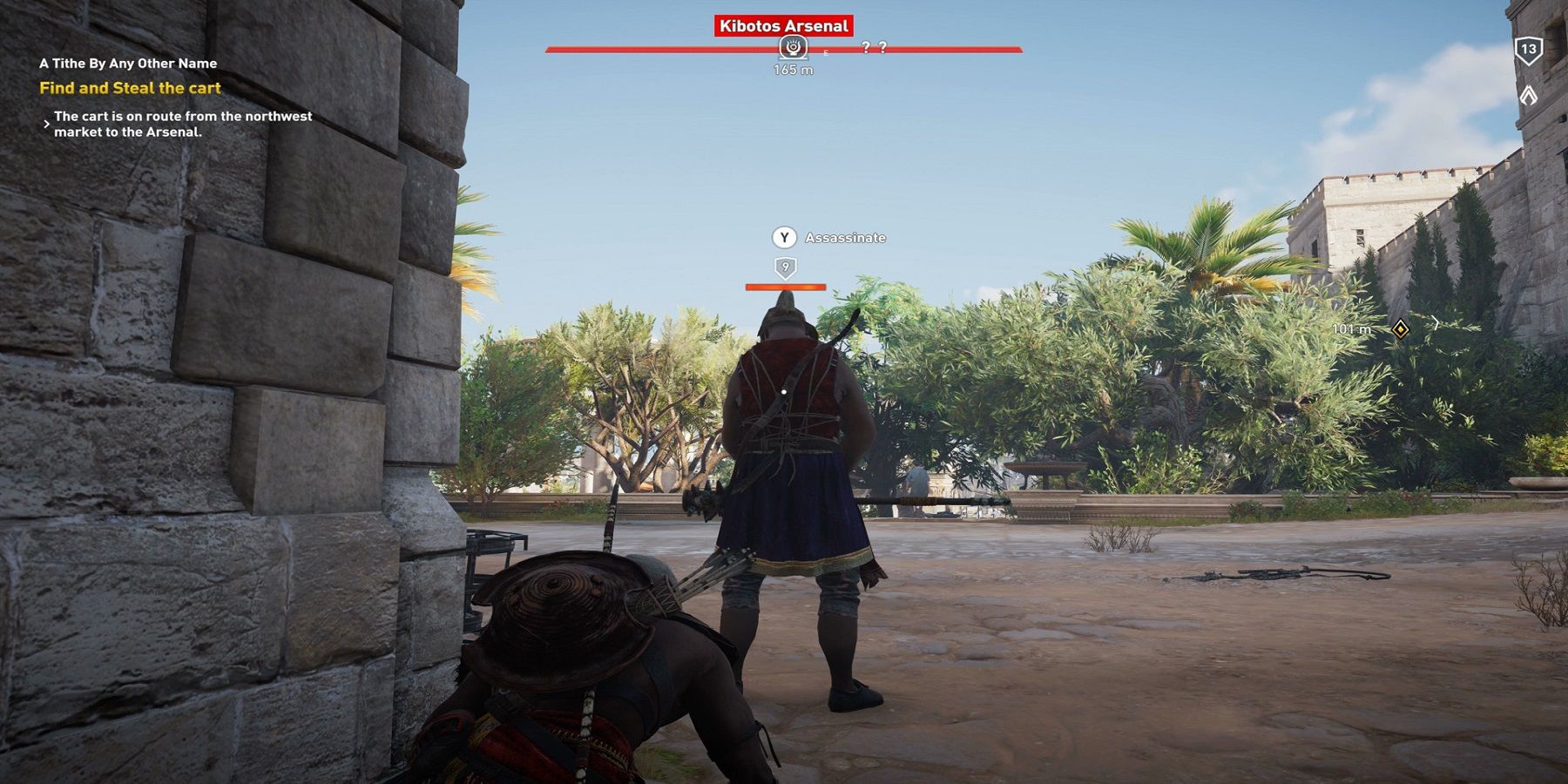 This is probably the biggest complaint long-time Assassin’s Creed fans have about Odyssey. The game’s focus on RPG elements means a greater focus on not only stats but the type of build a player is using.

Consequently, it’s entirely possible to go to areas where enemies are just as strong as the player, attempt to kill them via assassinations and fail entirely, being forced into actual combat.

While certain assassination-focused builds certainly do help, this was never a problem in Origins. If a player could sneak up behind a character, or land a headshot, they were dead. 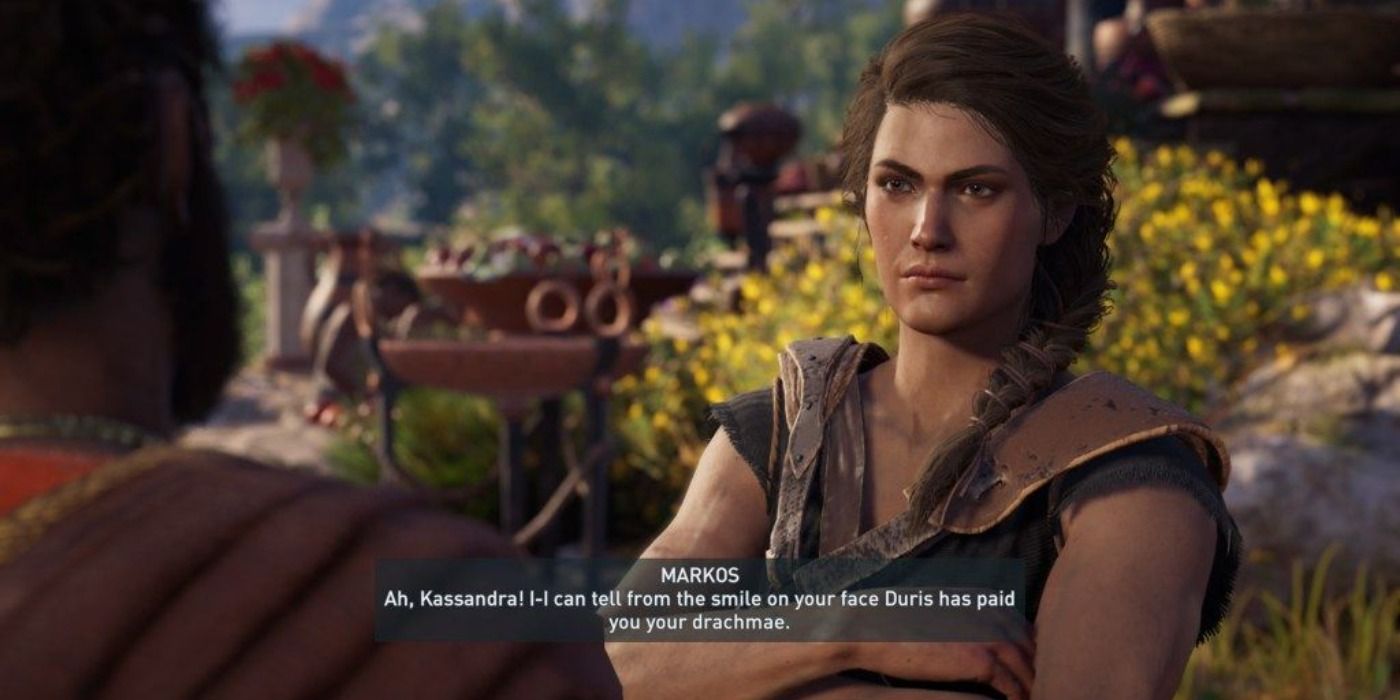 How many times did players slap their foreheads when they had to clean up one of Markos’ messes? Or heave a long sigh when pretty boy Alkibiades had players deliver a rather indelicate item?

Across the board, there are many more comedic moments in Odyssey compared to Origins. It makes sense when, as mentioned above, the story in Origins is a bit more serious in tone than the one in Odyssey. Plus, who could get tired of watching ancient Greek philosophers and writers bicker over fart jokes and the meaning of life?