As the series steered closer and closer to the world of mythology with almost every installment, Assassin’s Creed Odyssey took the plunge by introducing indisputably fantastical elements and characters into the game. While plenty are challenging foes, such as Medusa and the Minotaur, others like Hephaistos, the blacksmith God, can be a major benefit to your adventures through ancient Greece. If you want to take full advantage of this Godly smith, you’ll need to know how to find Hephaistos’ workshop first. You won’t have to climb Mount Olympus to reach it, though, so follow our guide to learn where this hidden workshop lies, plus all the things it allows you to do.

Hephaistos’ workshop is a unique workshop compared to the others in the game, and was only added as part of an update added to the game at the beginning of 2019. Make sure you have the most up to date version of the game installed before tracking this God down or you might just be chasing a ghost. 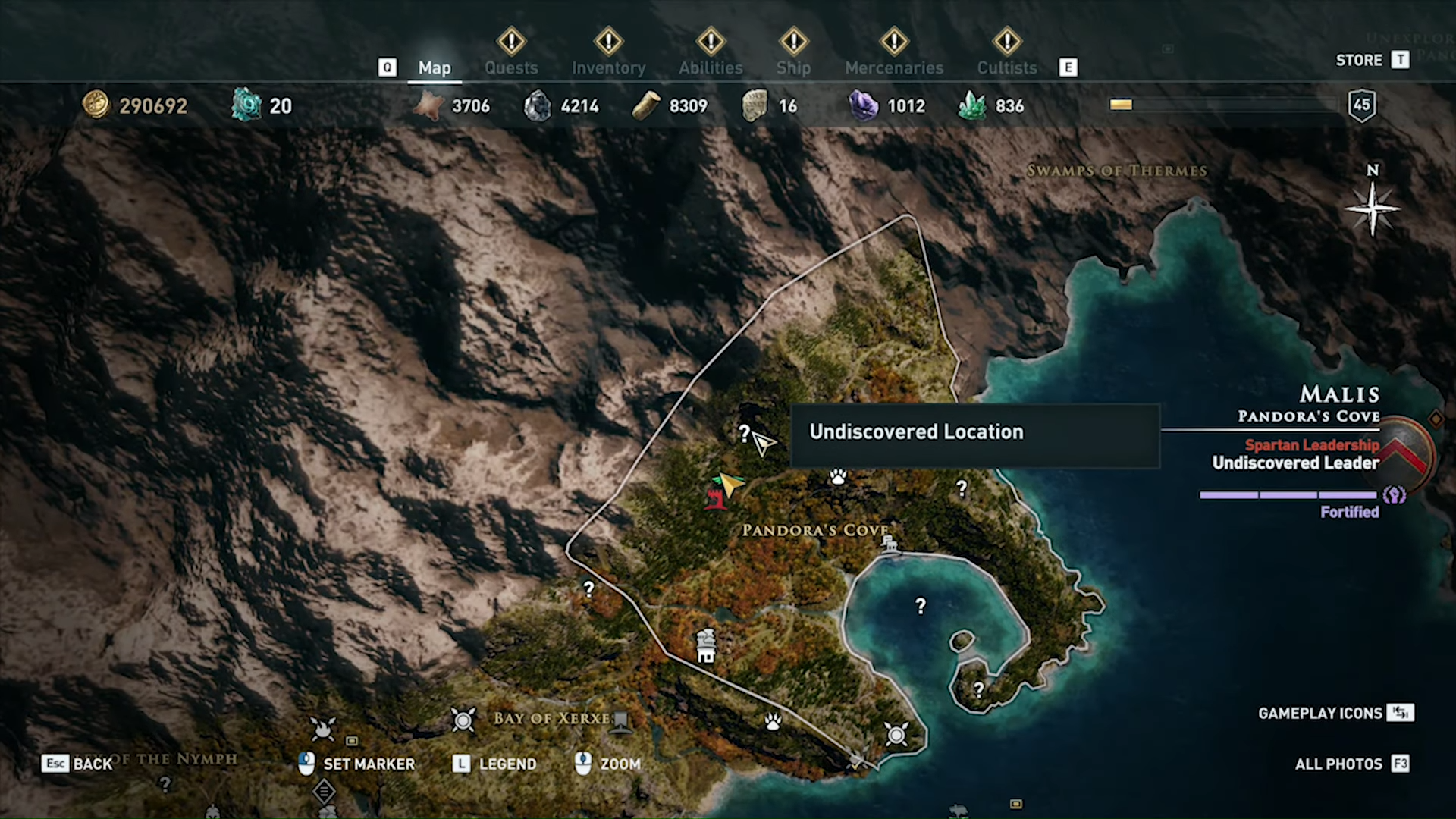 First you need to go to the island of Malis and look for Pandora’s Cove. If you haven’t been to this area before, it will be fairly high North on the map. Once here, travel up until you find the Temple of the Golden-Bowed Goddess viewpoint. After using this point you should see the question mark show up on your map directing you to Myson Cave. There’s a small entrance you need to find at the bottom of the mountain leading you to a gap you can squeeze through.

You’ll probably want to whip out a torch inside since it will be quite dark, but you will have no trouble finding Hephaistos just up ahead in the cave.

How To Upgrade Engravings In Assassin’s Creed Odyssey

Once you speak to Hephaistos and access his services, you will have three mean options to choose from, Learn, Upgrade, and Engrave. 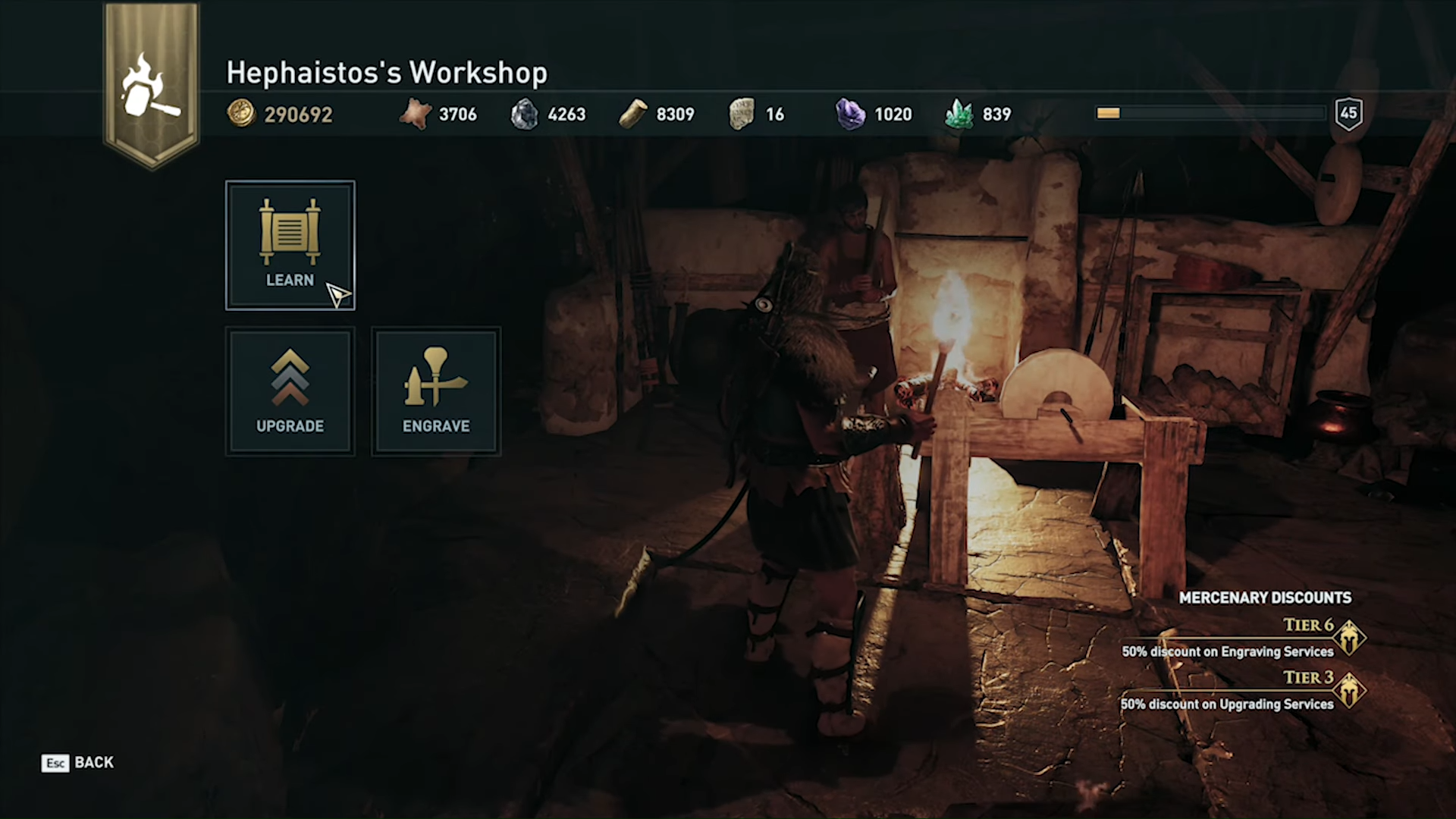 Learning allows you to pay quite an expensive fee in order to learn a new skill, but what you end up learning is often a far higher tier skill than what you previously had. For example, increasing the damage done with swords from a +12% stat to a +18% stat would cost 30,000 drachmae.

Upgrading is no different here than it would be at any other blacksmith or workshop in the game. You can pay him to level up whatever gear you’re rocking to match your character level, but what you’re most likely going to be coming to Hephaistos is his Engraving services.

For Engravings, you can upgrade your existing Engravings assuming they are at tier 5 already. Just like at a traditional blacksmith, this modifier will give you some form of +X% boost to whatever it is you’re upgrading, and the higher rarity it is, the more it will cost. If you have one, or more, Engravings at tier five, which you level up via the specific challenges like killing leaders, getting kills with specific weapons, etc, can be upgraded to tier six and tier seven, the maximum.

Getting even one Engraving to tier seven will be very, very expensive. Upgrading from five to six will cost 30,000 and then an additional 60,000 for tier seven. Those prices are the highest they can be, however, and don’t take into account whatever Mercenary Discount you may have.