Assassin’s Creed Valhalla: How To Get Excalibur, Treasures Of Britain Guide

One of the legendary weapons that can be acquired in Assassin’s Creed Valhalla is none other than Excalibur, the great sword wielded by King Arthur himself. Unfortunately, Eivor can’t pull it from the stone by using her strength alone, and as with any Assassin’s Creed game some collecting must be done before the prize is won. Fortunately, this guide covers what you need to do in order to add this legendary weapon to Eivor’s arsenal.

This is such a sought after weapon due to its amazing stats, as well as the fact that its special power blinds any enemy within range by using Heavy Finishers and Criticals. Keep reading to learn the steps you need to take in order to acquire Excalibur for yourself!

Collect 11 Tablets Labeled As The Treasures Of Britain 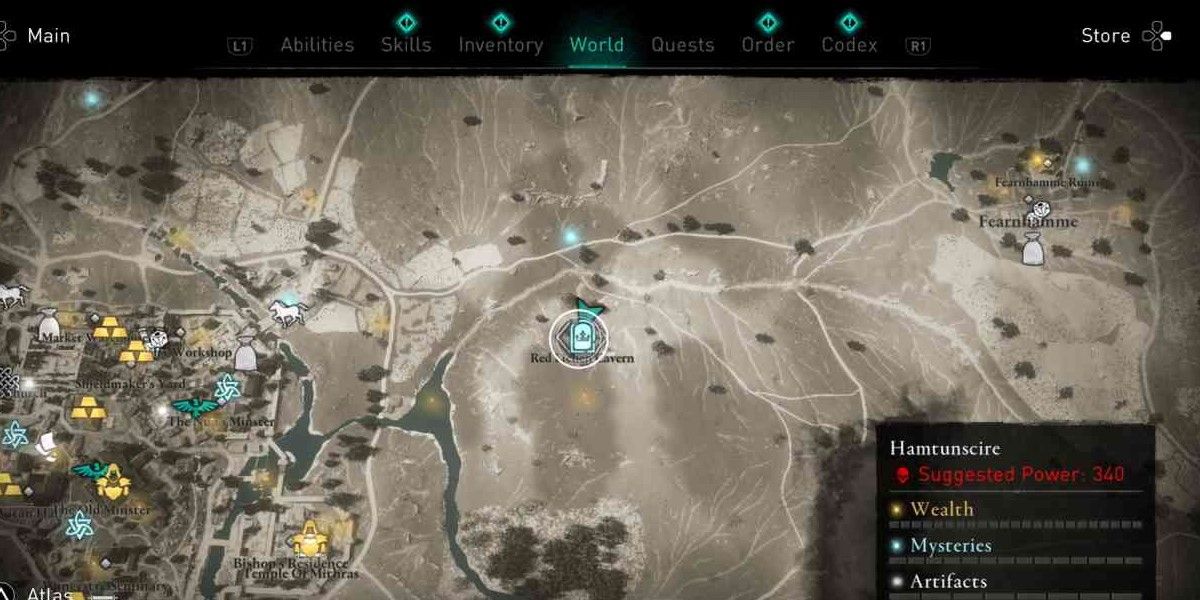 The first step is to collect all 11 tablets that are a mystery known as The Treasures of Britain. They are scattered all across the map, and each one presents a new and interesting challenge that will require all of your problem-solving skills in order to find them.

You can find each of the tablets at these locations: 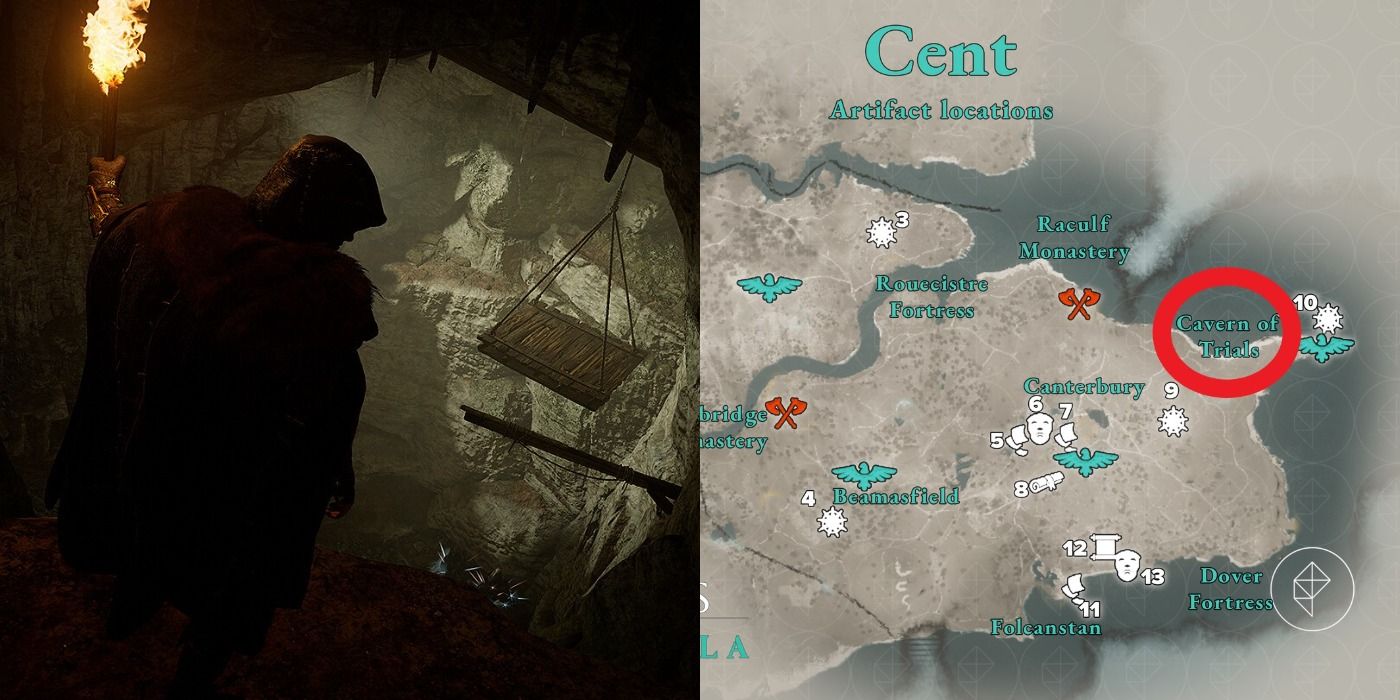 This tablet is in the north-eastern part of this region and it offers several tricky puzzles for you to solve. The basis of it is that you have to collect a series of keys in order to open the doors that will grant you entry to the room containing this tablet. 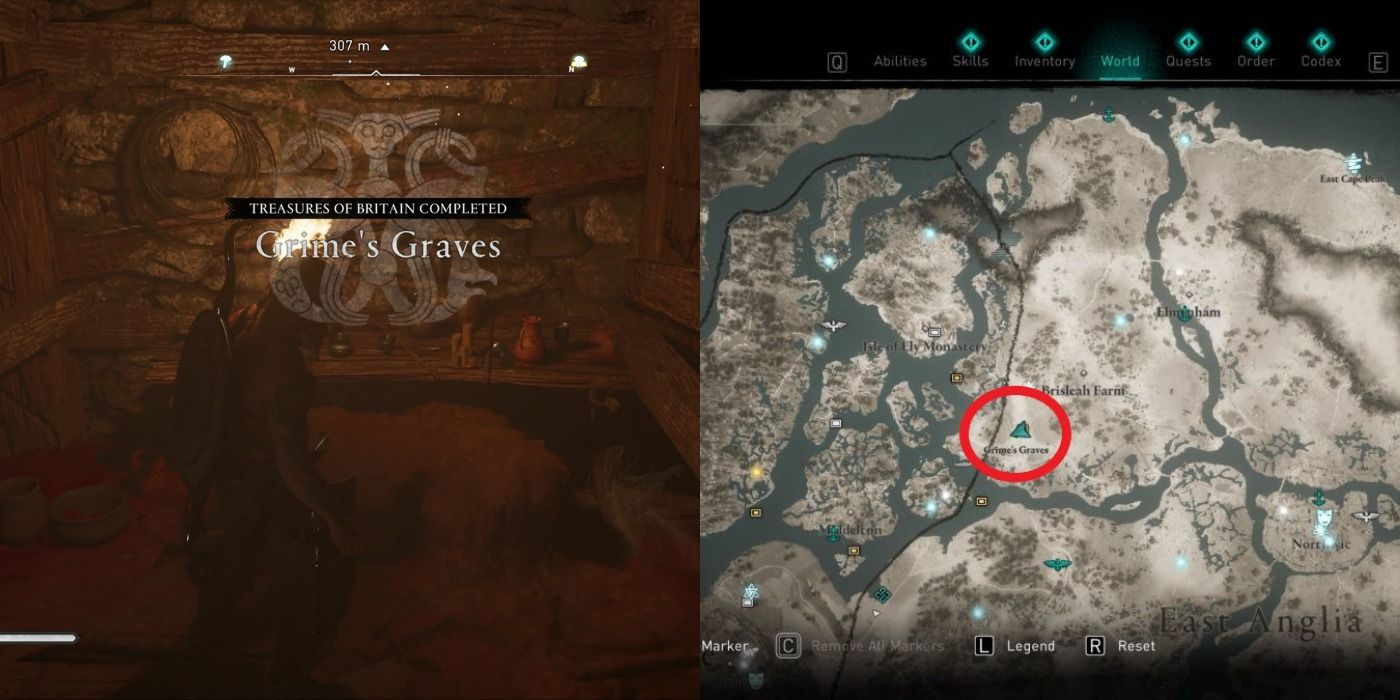 This tablet can be found along the western edge of East Anglia, just south of the Brislieah Farm. There will be a table in a cave at this location and you will have to break the pottery on it in order to obtain this tablet. 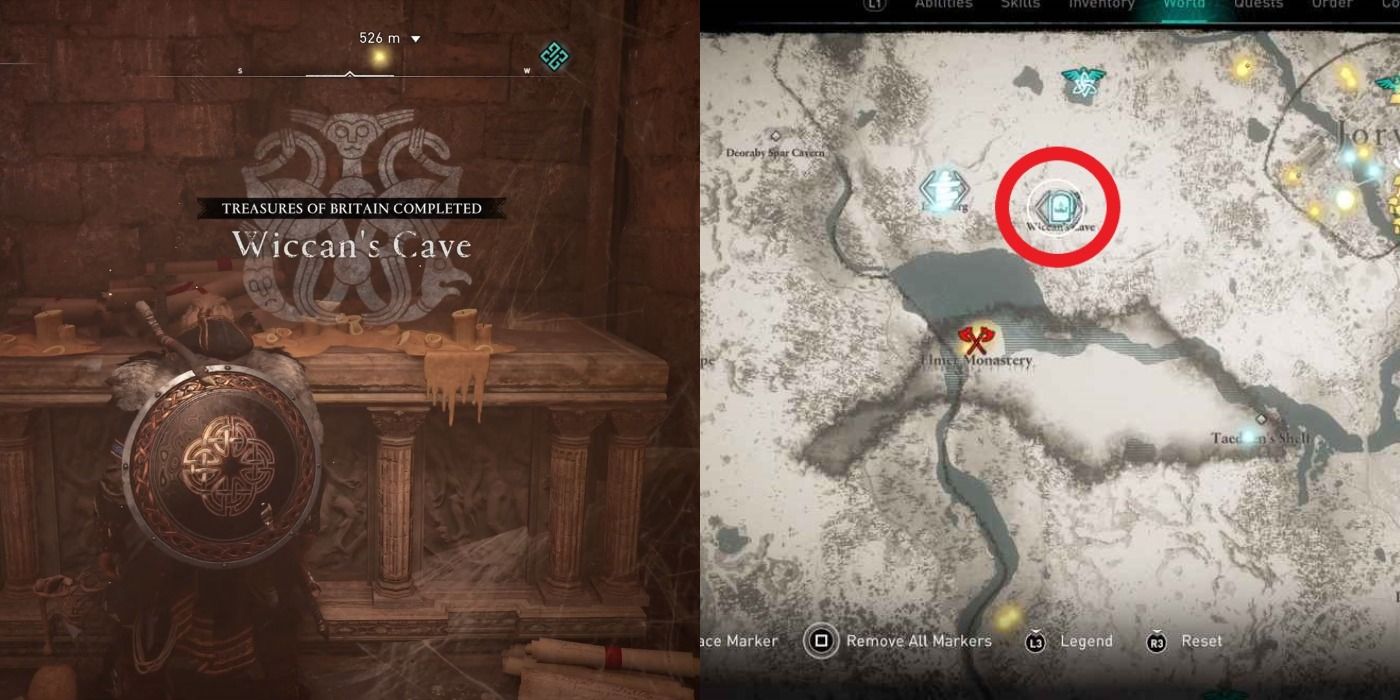 Wiccan’s Cave is located to the West of Jorvik in Eurvicscire and it is found in a cave located in the side of the mountains. You will want to make your way to the end to collect your prize by breaking down a wall and shooting a lock off a door. 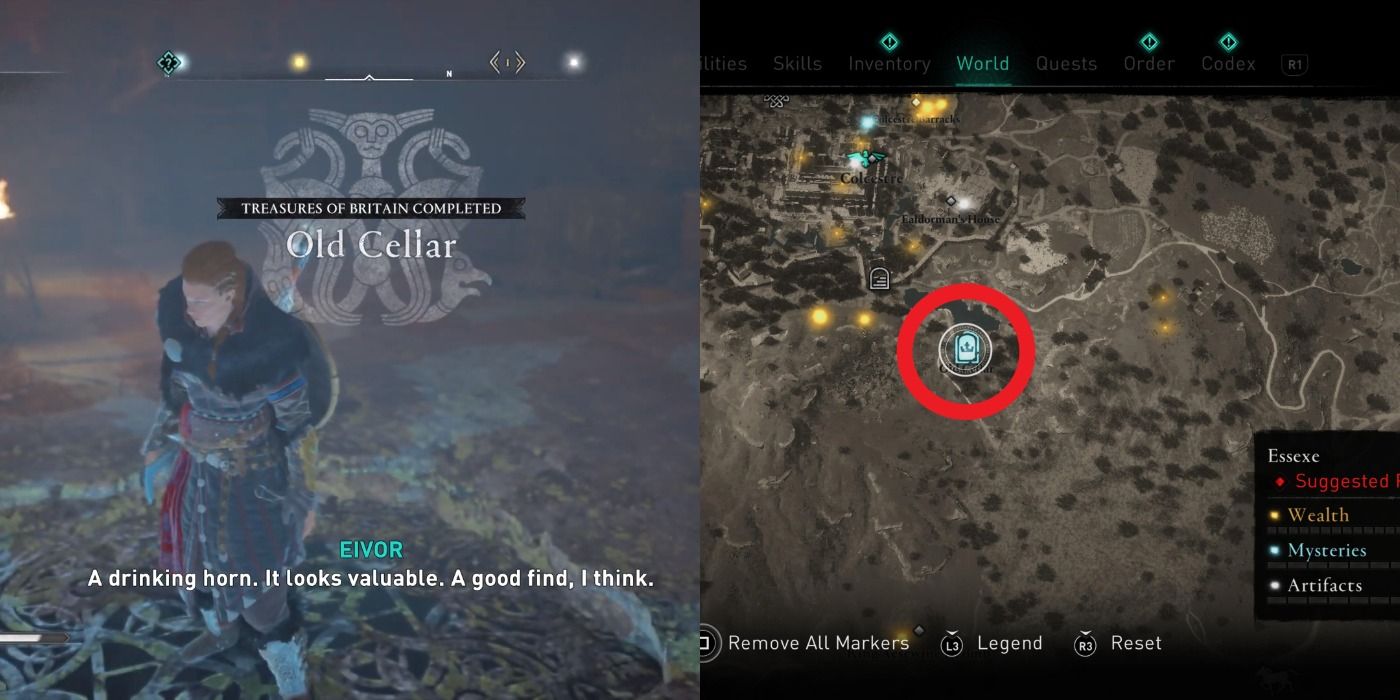 Essexe is where this tablet is located (a location with plenty of side quests) and it can be found south of Colcestre, which is a bit East of the center of this region. You will want to break the kegs within the cave in order to nab this tablet and it is the perfect thing to search for after you beat the game. 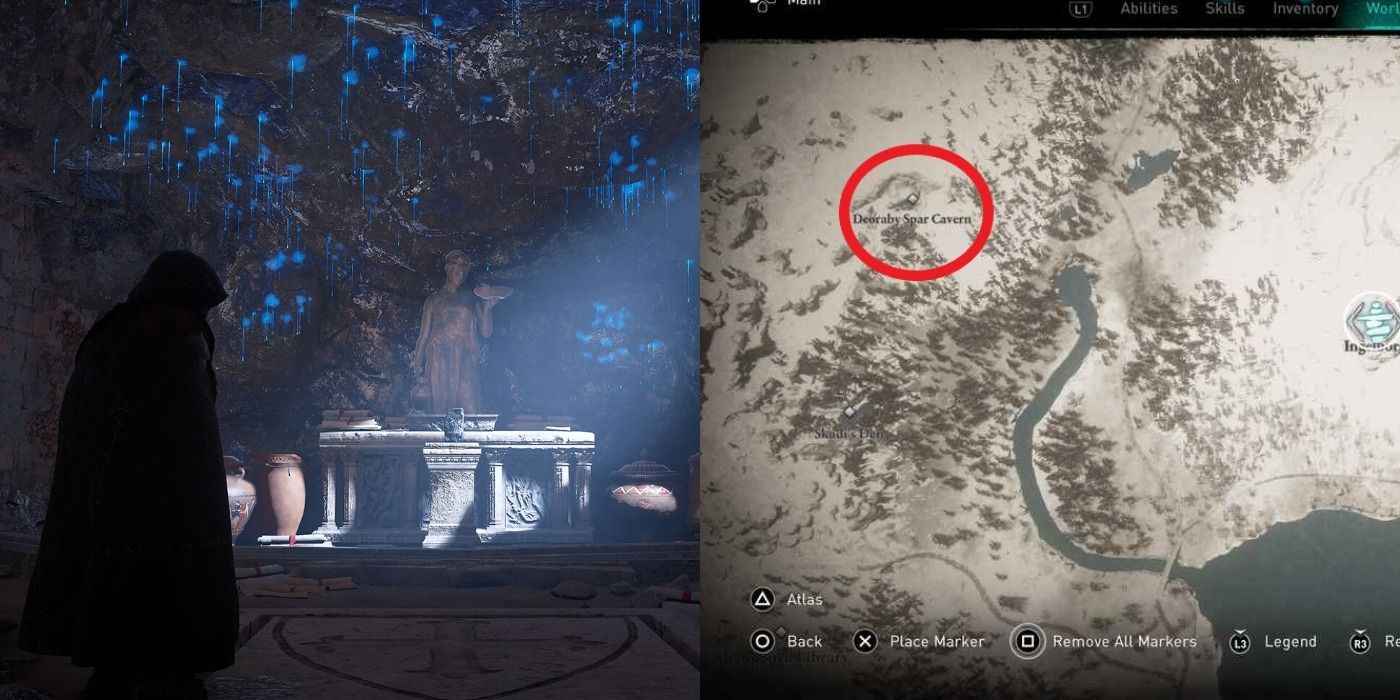 North of Hemthorpe in Snotinghamscire rests Deoraby Spar Cavern and the location of one of the Treasures of Britain. This is one of the easiest ones to find as a bit of parkour will allow you to make your way to the end of the tunnel and find what you are looking for. 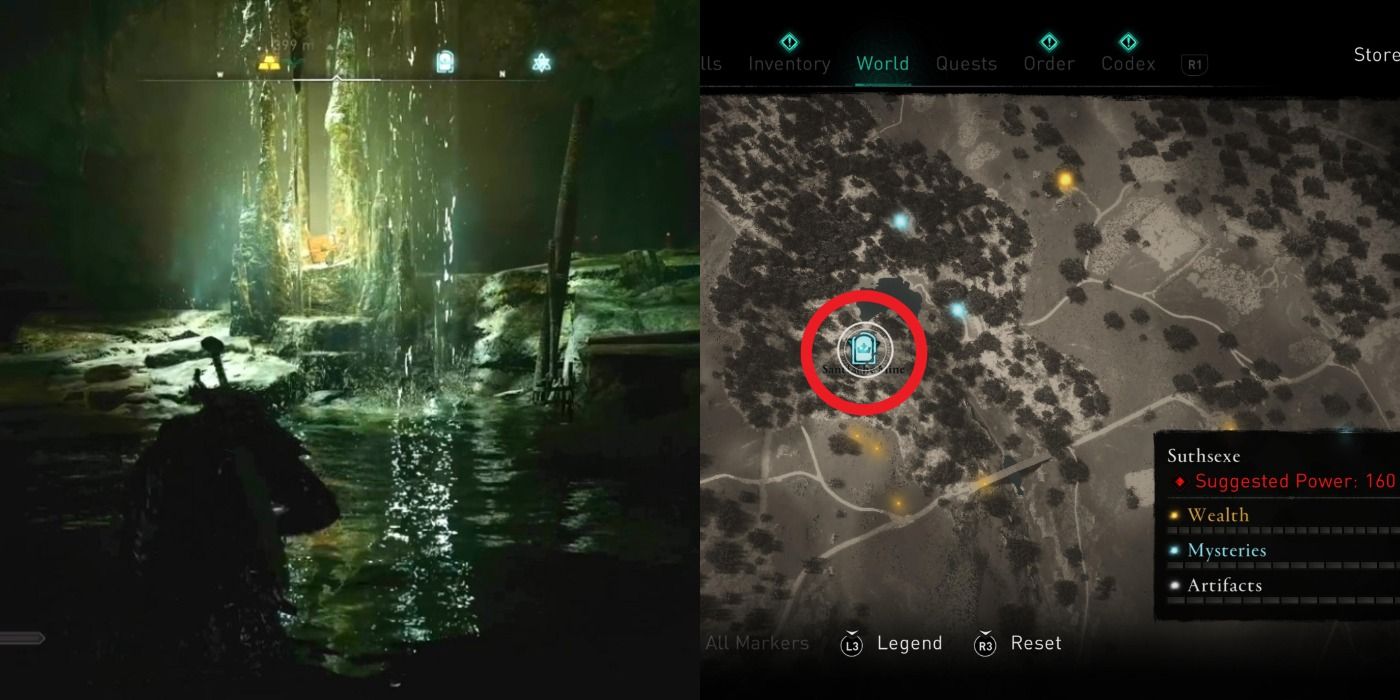 The Santlache Mine is Southwest of the Tonbridge Monastery, just over the border in Suthsexe. You have to figure out a way across the platforms then dive in the water and swim toward the location of the tablet. 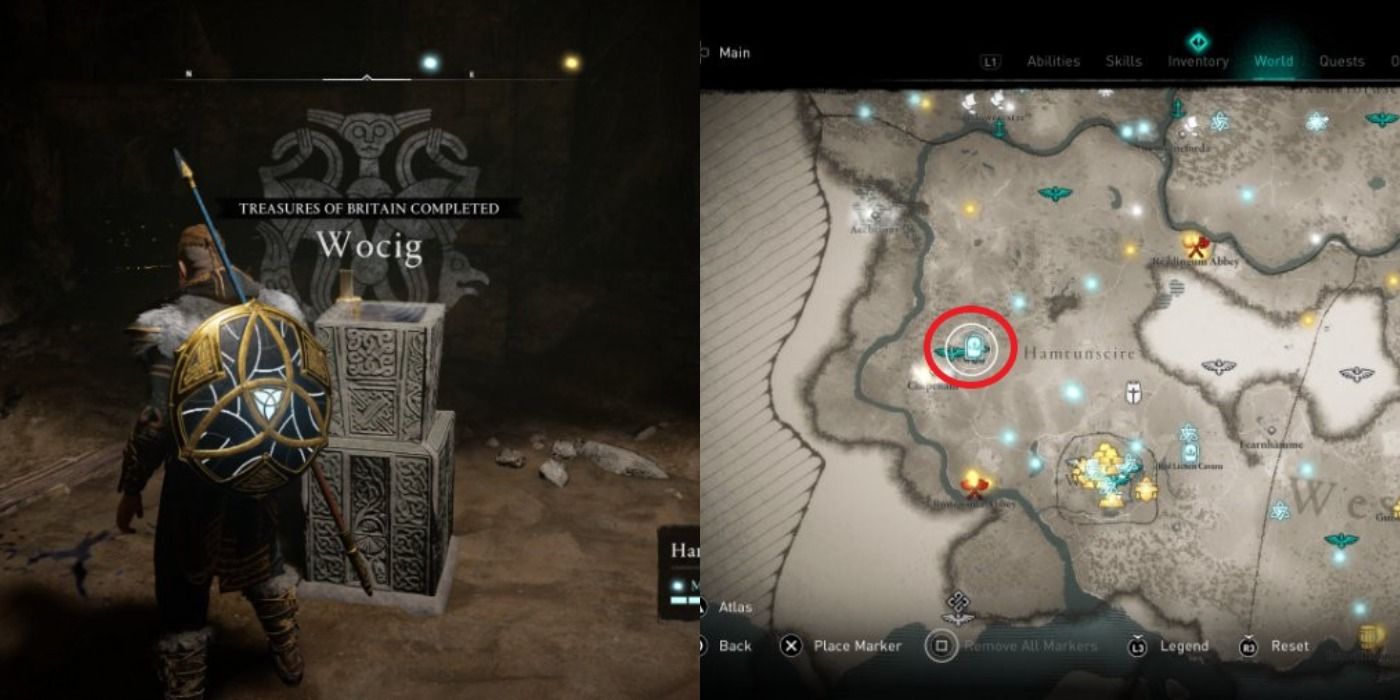 Wocig is located just north of Chepeham in Hamtunscire and it is yet another cavern that Eivor will have to explore. You will want to blow up the explosive red pots near the end to reveal a small hole at the bottom of the wall that you can slide under to obtain the tablet. 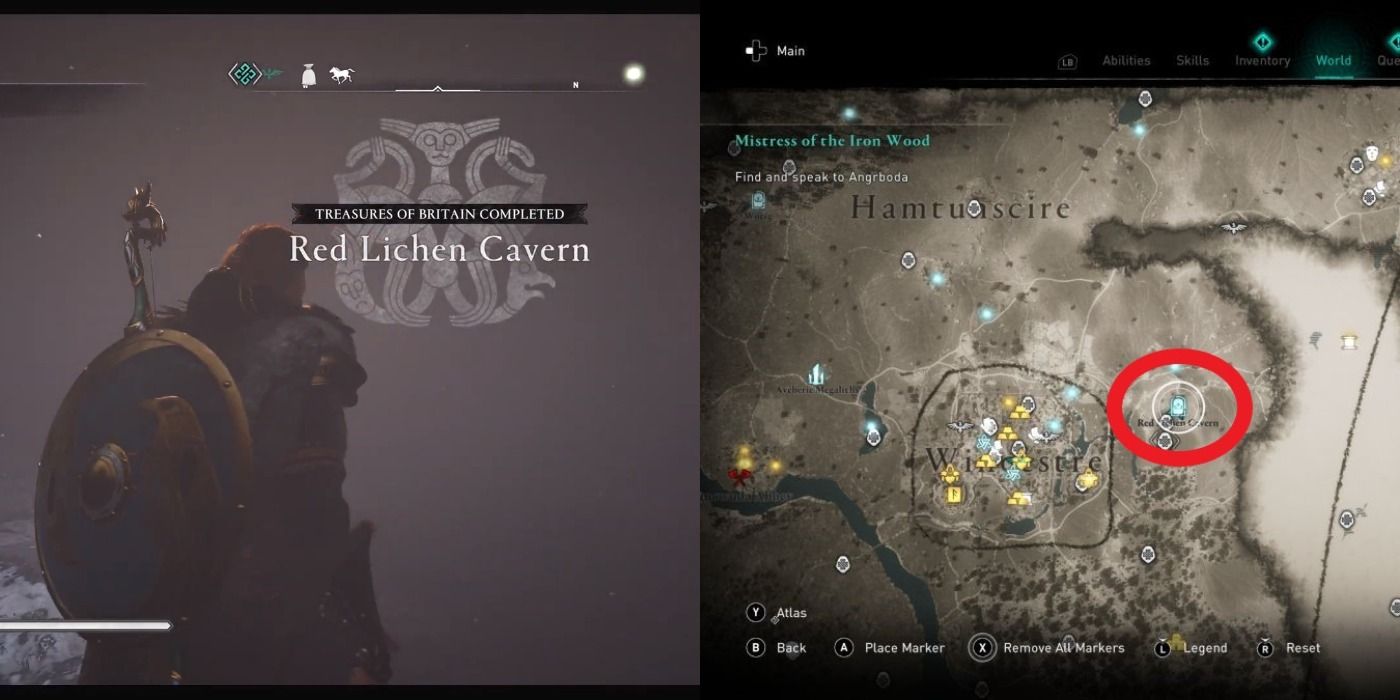 Just outside of Winchester in Hamtunscire rests Red Lichen Cave, which is where you will find another tablet. There is poison at the end of the tunnel, so use your torch to extinguish them and you will be granted access to your prize. 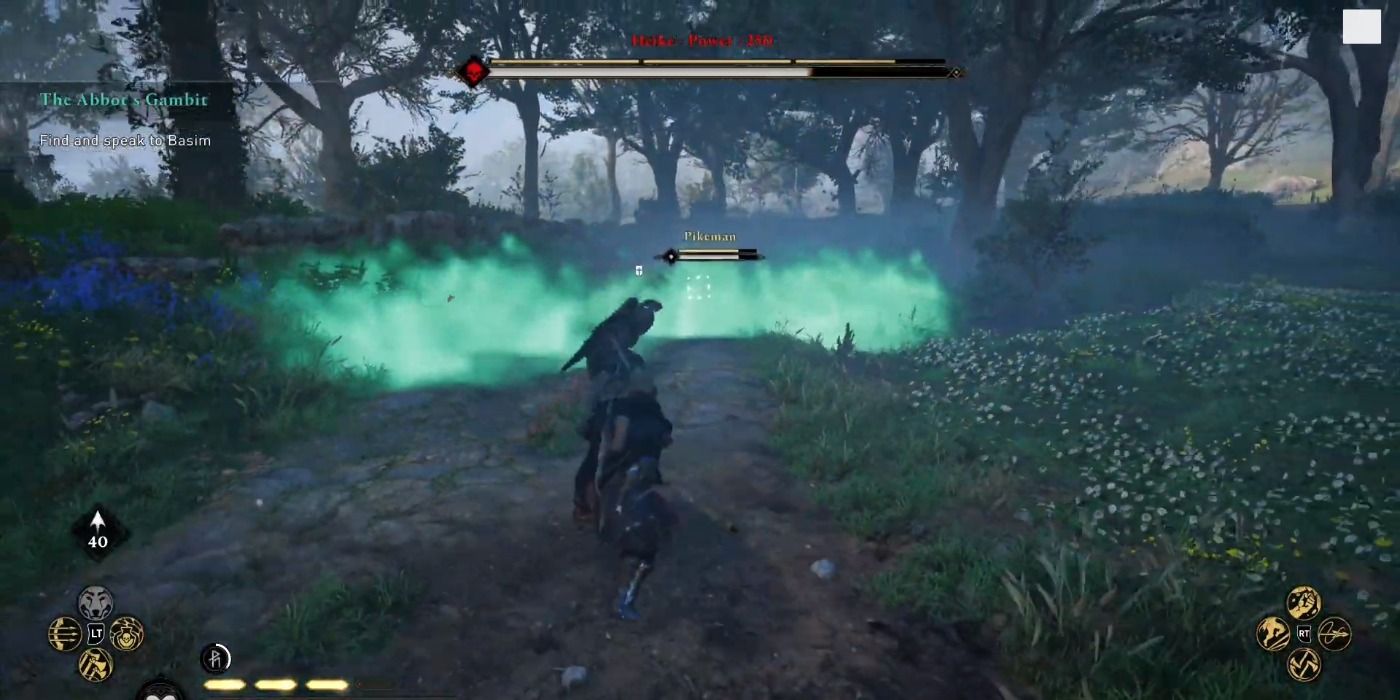 The last three tablets can be found on Zealots, and one of them goes by the name of Heike. He can often be found in Essexe, but they do move around quite a bit so either mark him on your map or do a bit of searching to find and kill him. He is a 250 power level so make sure to have some upgraded armor before facing off with this foe. 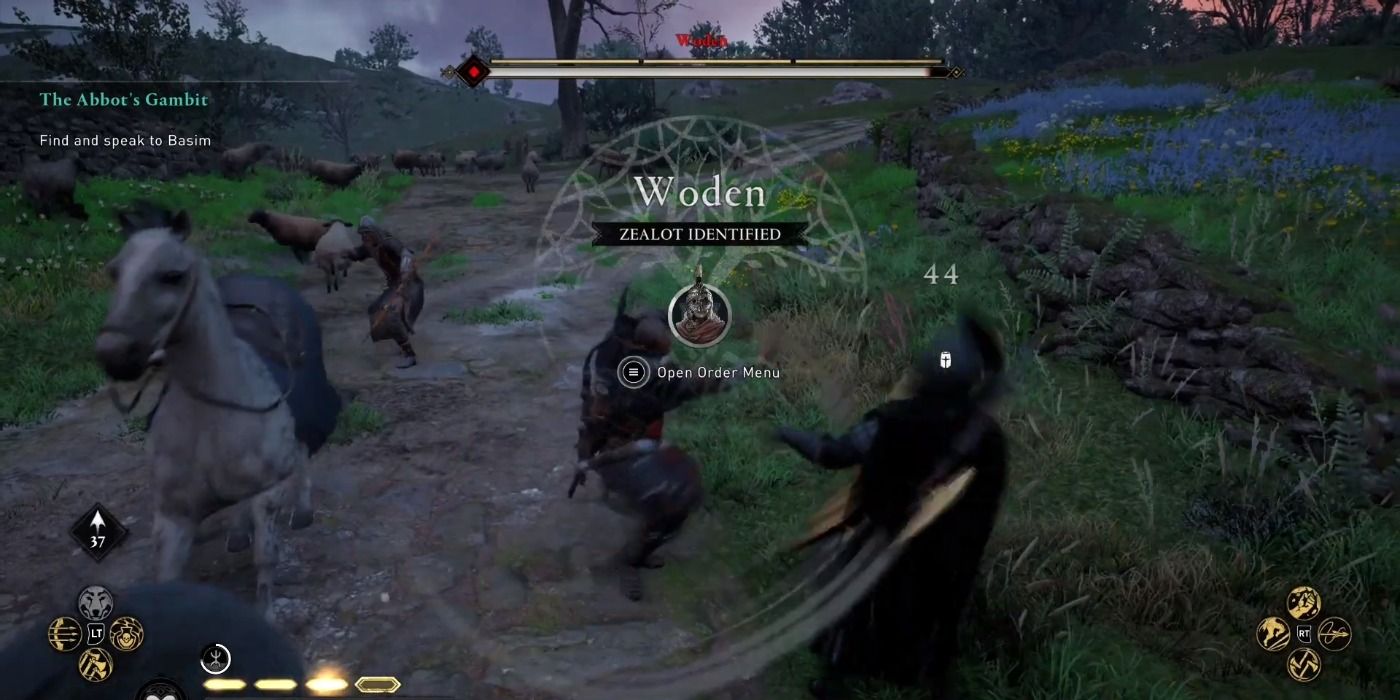 Woden is often found in Cent traversing the main roads of this region and he has a power of 220. He has a knack for throwing smoke bombs, so it is often recommended you use your Man’s Best Friend ability to knock him down so you can deal a lot of damage. 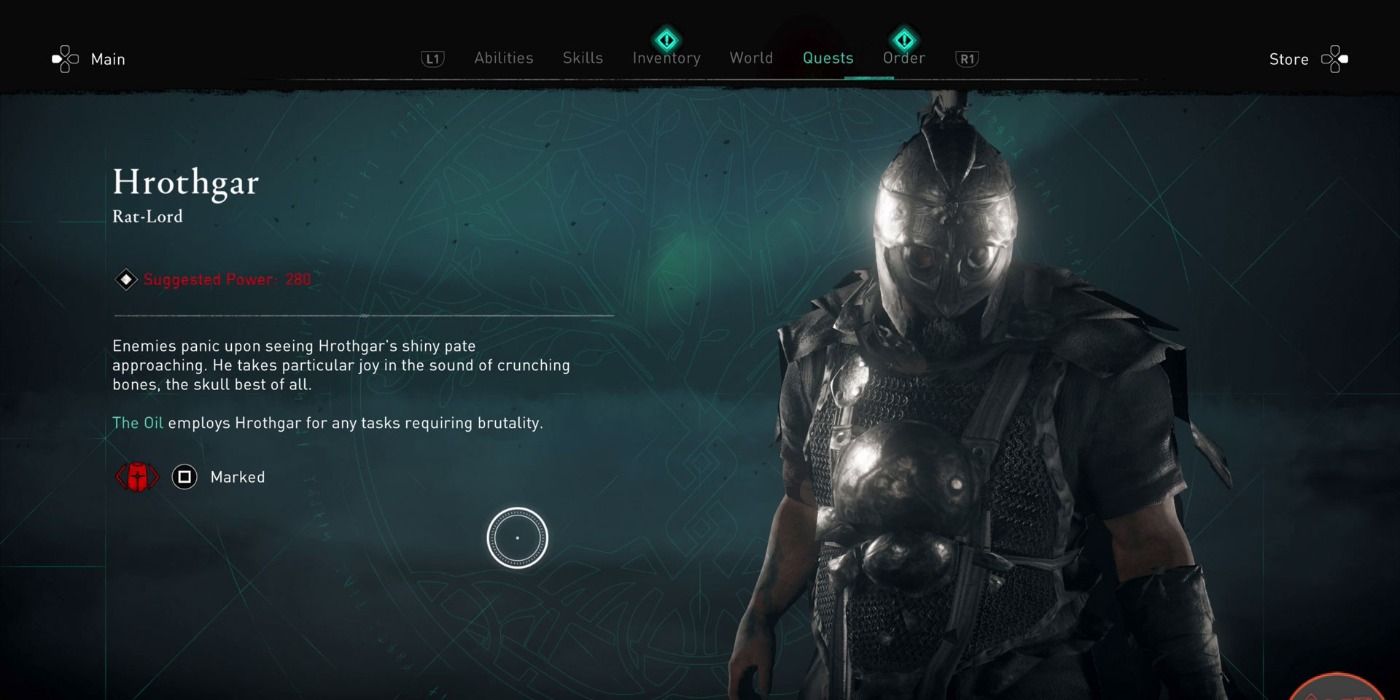 This is the hardest of the three as he has a 280 power level and he can be found in Suthsexe. He is large and loves to throw spears at you, as well as poison bombs so use your abilities wisely in order to defeat this powerhouse and collect the final tablet.

It is a good idea to obtain the tablets in Hamtunscire last as this is also the location of Myrdinn’s Cave where you can acquire Excalibur. It is just above the Fly Agaric in this region, but south of the Synchronization in the Northern part of the region.

You will find another cave and you want to make your way to the end where you will be forced to dive off a cliff and into some water. There is an opening at the bottom you can swim through, and when you emerge climb the stones on your right.

Put The Tablets In The Stone 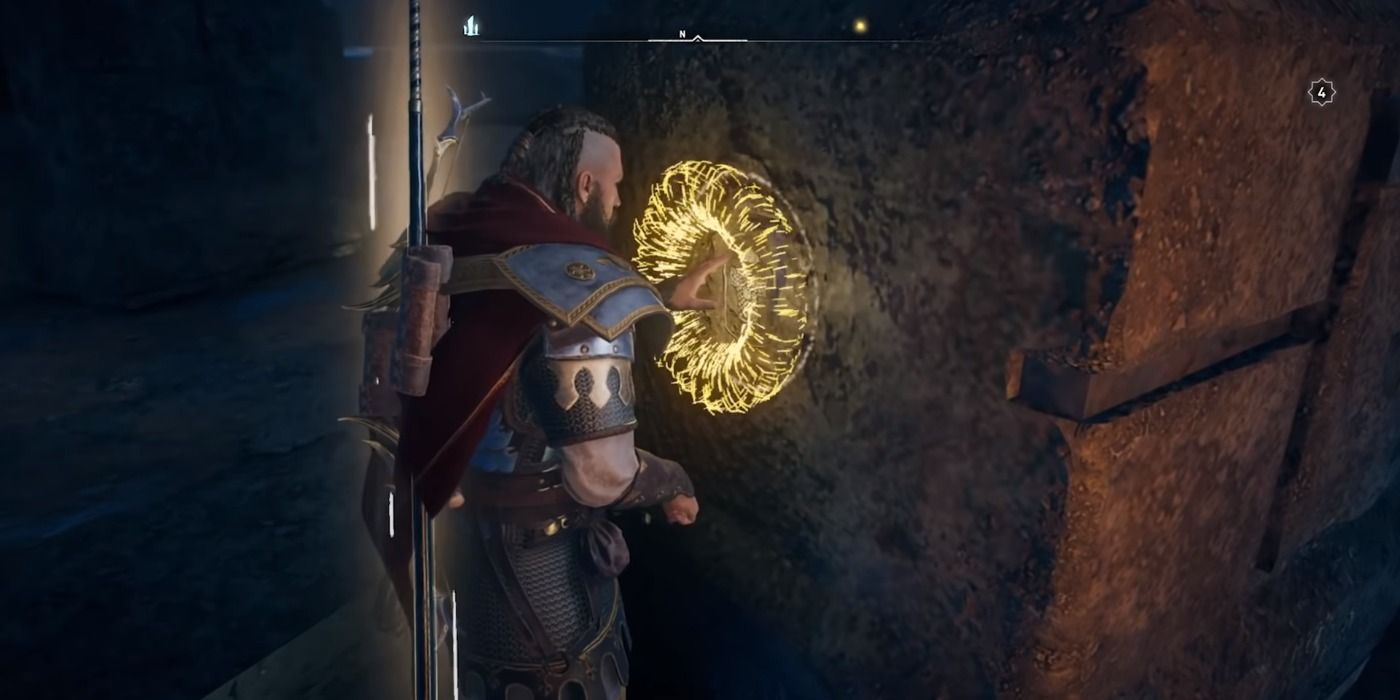 When you reach the part of the cavern that has a variety of stones in a circular formation then you have reached your final destination. The tablets can be placed in each of the stones, which will prompt the release of Excalibur, even if it isn’t exactly historically accurate.

Pull The Sword From The Stone 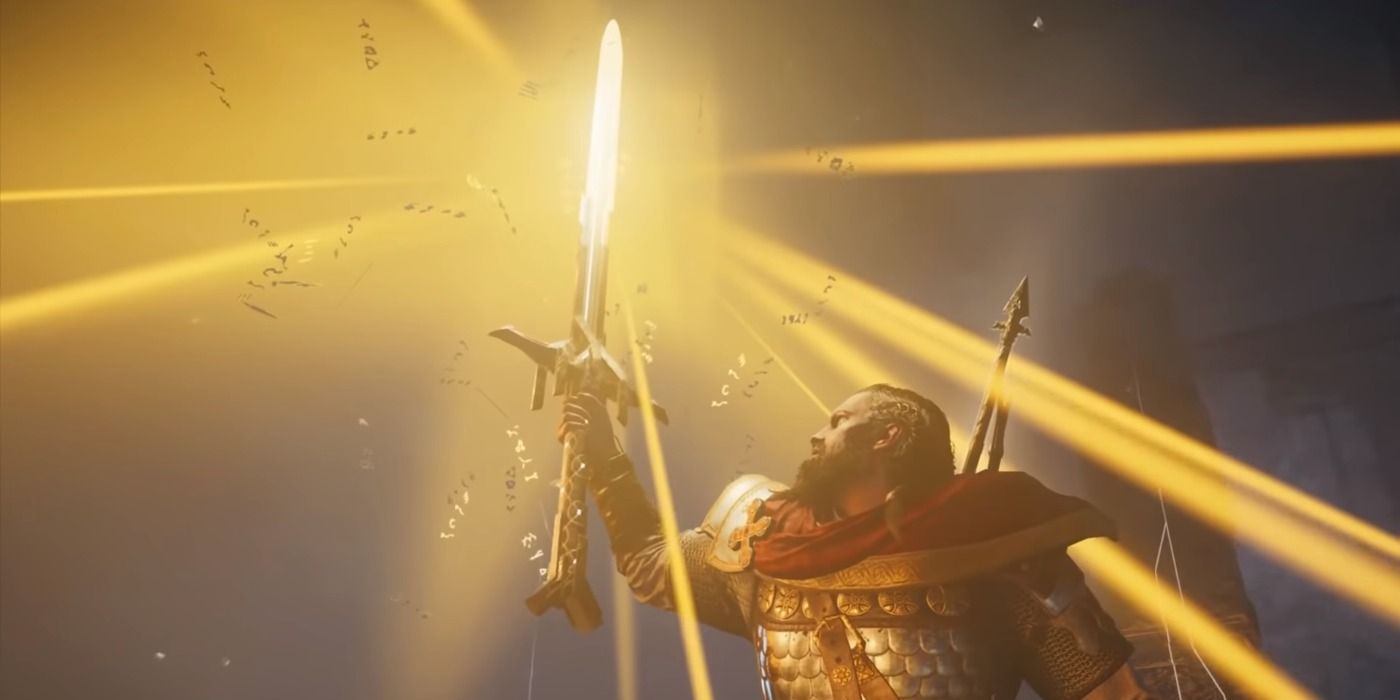 Once all of the tablets are in place, and the sword is glowing, then you can pull it from its rocky encasement. All you have to do now is load it up with some of your best runes and head off to take down your opponents or a couple of Norse mythological creatures.

NEXT: 10 Tips To Make An Overpowered Character In Assassin’s Creed Valhalla 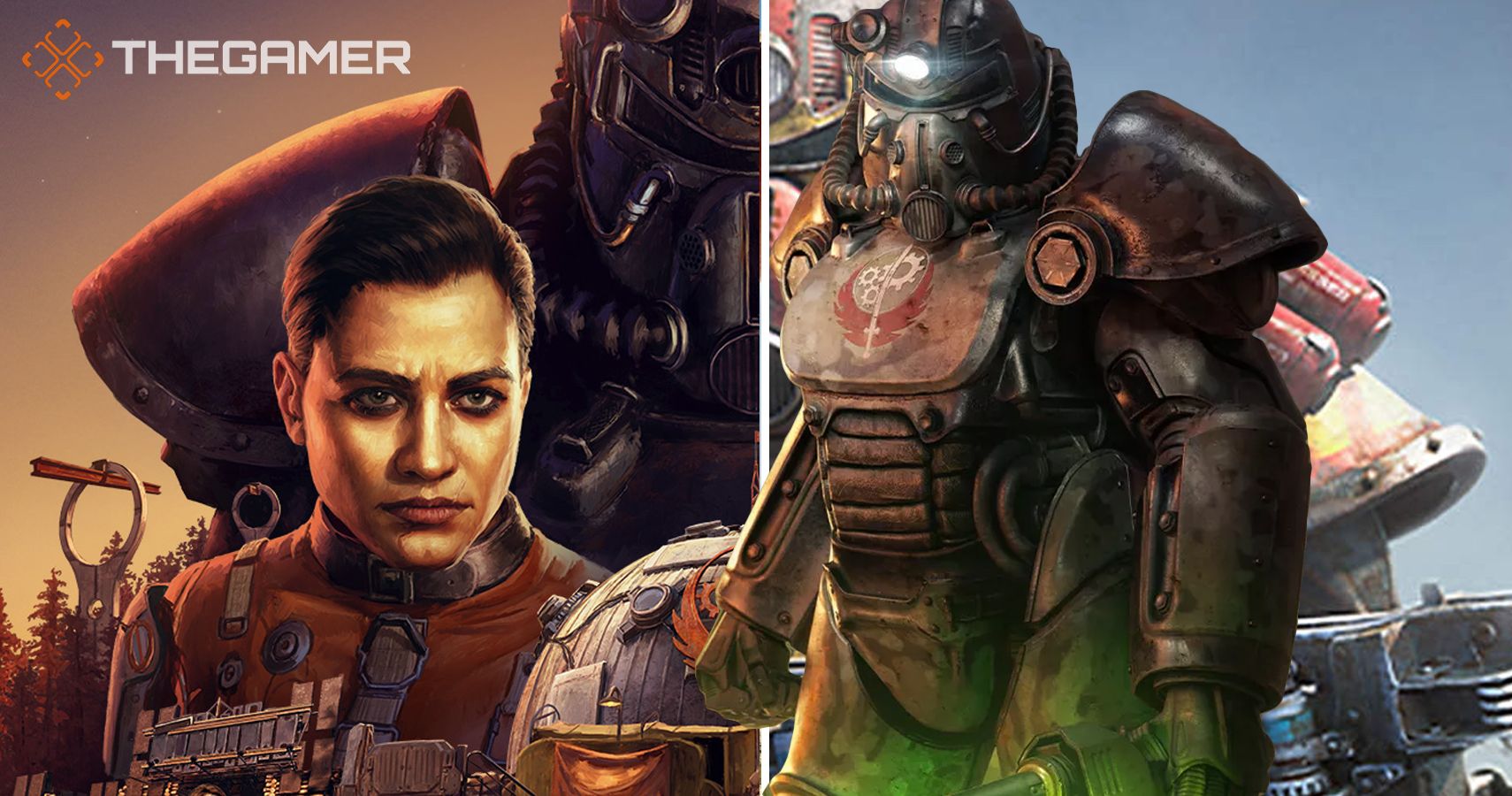