Despite hopes that we might be seeing something new for Persona at the upcoming 25th anniversary concert, Atlus has smartly preempted the anger and warned fans of the series not to expect any new announcements.

2022 marks the 25th anniversary of the Persona series, which means that fans all over the world are celebrating by constantly analysing anything Atlus does to see if there's anything new on the horizon. Although it just announced the long-awaited ports for Persona 3, Persona 4 Golden, and Persona 5 Royal for Xbox and Switch, fans had hoped that we might get a glimpse at Persona 6 somewhere in the mix.

Well, we now know without a shadow of a doubt that we won't be getting those teases at the upcoming Persona 25th anniversary concert. Seemingly aware that fans might be expecting some kind of announcement, Atlus shared a message on its website that confirms that no announcements are planned for a new game and that it'll all be about the music. 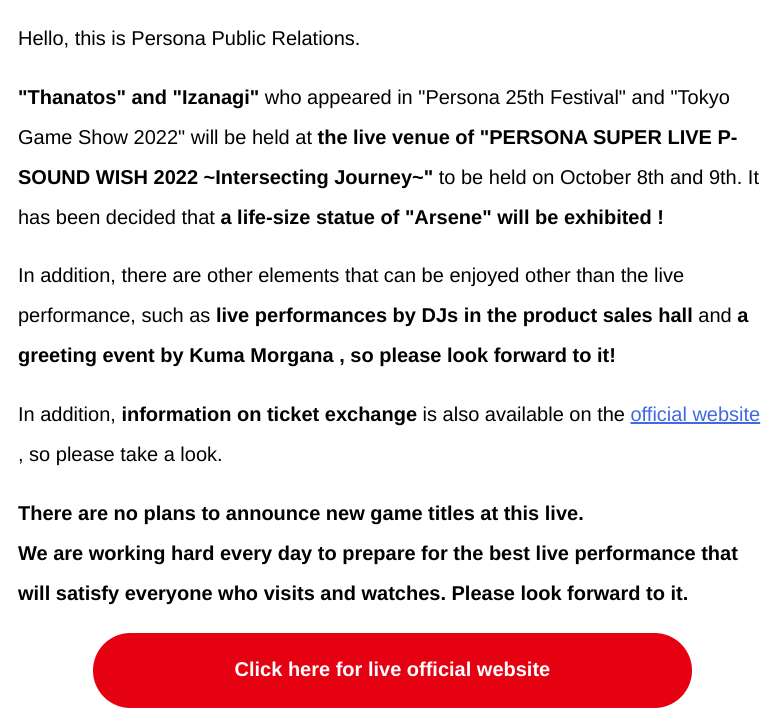 As reported by IGN, the statement reads, "There are no plans to announce new game titles at this live show,” Atlus clarifies on its Japanese website. “We aim for the best live performance that will satisfy everyone who can come and watch, and we are preparing with all our strength every day. Please look forward to it.”

There is a precedent for thinking that Atlus might announce something new at the concert, beyond the hopes and dreams of fans. Anniversary concerts in the past have actually had announcements for new games, such as the dancing spin-offs, Persona Q2, Persona 5 Royal, and Persona 5 Strikers. With that in mind, it's fair enough that you might expect the same out of this year's concert, but that's apparently not the case.

Although there's always the hope that a studio is just trying to conceal the announcement to make it more surprising, it took Atlus long enough to announce the Persona ports, let alone confirm a brand-new game in development this early on, so it seems incredibly unlikely to be the case. Let's just take it at its word here.