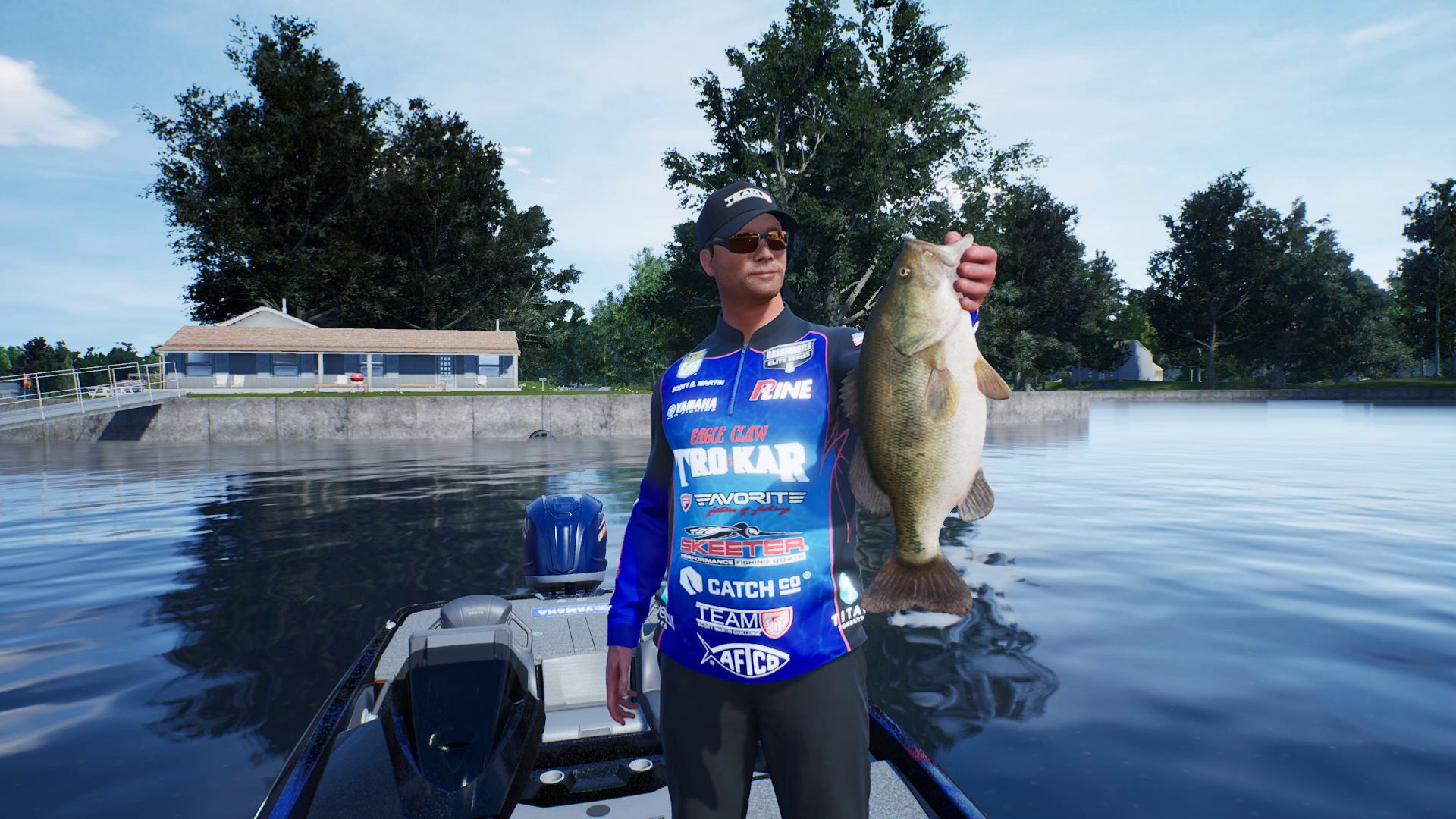 The latest fishing title from Dovetail Games is no mere simulation but a full-on, razzmatazz-infused competitive sports game.

Ah, fishing games. A sheltered riverbank of calm and relaxation amid the fast-flowing mayhem of the rest of the modern video games world, right? Not necessarily, it seems – at least not if Dovetail Games, the heavyweight champions of the sim game world, have anything to do with it. Dovetail’s latest fishing game, Bassmaster Fishing 2022, isn’t a fishing game at all. It’s a sports game which just happens to involve catching fish on baited lines attached to rods.

No sports game is complete without an official licence, and Bassmaster Fishing 2022 has the imprimatur of BASS, the US-based global governing body for bass sports fishing, which runs the world’s highest profile bass fishing championship, the Bassmaster Classic. Over here, fishing may be perceived as a genteel, contemplative country pursuit, but in the US it’s a hugely popular spectator sport, with Fox Sports televising BASS’s Bassmaster Series live and that series’ blue riband event, the Bassmaster Classic, attracting live crowds of over 100,000 during its four days of action.

Gaining entry to – and winning – the virtual version of the Bassmaster Classic is the ultimate aim of Bassmaster Fishing 2022’s career mode, but that won’t be easy. Studio producer Desmond O’Connor describes the career mode’s structure as so: ‘You start off in the lowest ranked College Series. In there, you’ve got a combination of traditional Bassmaster events, as well as some Pro Challenges, which add some variety and incorporate some different rulesets.’

Ben Gunstone, executive producer of fishing at Dovetail, adds: ‘If you played the career mode back-to-back and won everything, so you could get to the Classic and then win it, you’re still looking at a minimum of 35 to 36 hours’ of gameplay. And the chances of you doing that the first time are pretty remote.’

Online, Bassmaster Fishing 2022 promises another novelty: Bassmaster Royale, a mode whose name gives a strong indication of its nature. Gunstone gives an overview: ‘Bassmaster Royale is our take on a Battle Royale-type game, with up to 60 people going onto the lake at the same time. As a player, it’s based on the total weight of the best five fish that you’ve caught. That combined number puts you on a leaderboard; over time, we bring up a cull-point, and if you’re underneath that point, you get removed from the game, until we end up with the last 10 and the end result of a single winner of the game.’

‘We are currently planning on that being a 40-minute session, but we’re taking advice, and it’s something we can tweak. We need to make sure that we’re balancing there being enough time for players to actually reach the point on the lake that they want to get to, catch some fish and get on the leaderboard’, adds Gunstone.

As with most Dovetail titles, Bassmaster Fishing 2022 is a surprisingly good-looking game, with O’Connor demonstrating the Fishing Trip mode, in which you can pick a lake – there are eight, all North American and venues for elite Bassmaster Series events – and just fish on it under no pressure.

O’Connor chose his pro-fisher, jumped in his boat and cruised over to a part of the lake he had previously earmarked as a likely source of fish. Gunstone, meanwhile, emphasised the importance of familiarising yourself with the environment: ‘You have to learn where the fish are on the lakes, otherwise – certainly when you get into the higher levels – you’re just not going to be competitive within your career mode. Which reflects what real pro angers are trying to do.’

There’s plenty of virtual technology you can bring to bear, such as placing markers at favoured fishing spots, and the demo made it obvious that, as fishing games go, Bassmaster Fishing 2022 is about as high-tech as you can get. The lakes and their surroundings look startlingly realistic and have been generated from real-life map data and stocked with virtual fish species that reflect their real-life counterparts, with some minor tweaks to ensure good gameplay.

The fish themselves have their own artificial intelligence, passing between points of underwater interest via ‘highways’, and varying their depth according to surface and water temperature, time of day, and other factors.

It certainly looks very realistic, particularly when O’Connor made use of the game’s underwater camera, essentially giving the view from your lure. O’Connor had to move his boat a few times, emphasising the game’s desire to reflect the unpredictability involved in real-life fishing. Picking the right lure and tackle also affects proceedings, and eventually led to the landing of a nice fat bass.

If you’re the sort of fishing enthusiast who harbours daydreams of making it big on the pro fishing circuit and earning millions of dollars, then Bassmaster Fishing 2022 is an exciting prospect: make it to the Bassmaster Classic in the game, and you’ll be participating in the sport’s glitziest spectacle. And the idea of Bassmaster Royale – embarking in frenzied fish-offs against 59 rivals at a time – is a fun new idea.

While Bassmaster Fishing 2022 includes the bucolic pleasures of any fishing game, its desire to add jeopardy and a competitive edge to that familiar blueprint is intriguing. Particularly in the current situation of restricted travel (not to mention the post-Brexit despoliation of Britain’s rivers by sewage companies), it should offer the perfect means for those who dream of becoming competitive anglers to live out their fantasies.