Bayonetta 3 – Chapter 6: Off The Rails Walkthrough

Bayonetta 3 depicts a battle against an unknown enemy to save the multiverse. The umbra witch Cereza will gather old and new allies in a journey across different worlds, with new enemies and some familiar faces in them.

This chapter will show you the area of Qin Lan: Lian Jie Shang and Bayonetta's activities across this world, including a reunion with her counterpart. Here's everything you need to know to beat it. 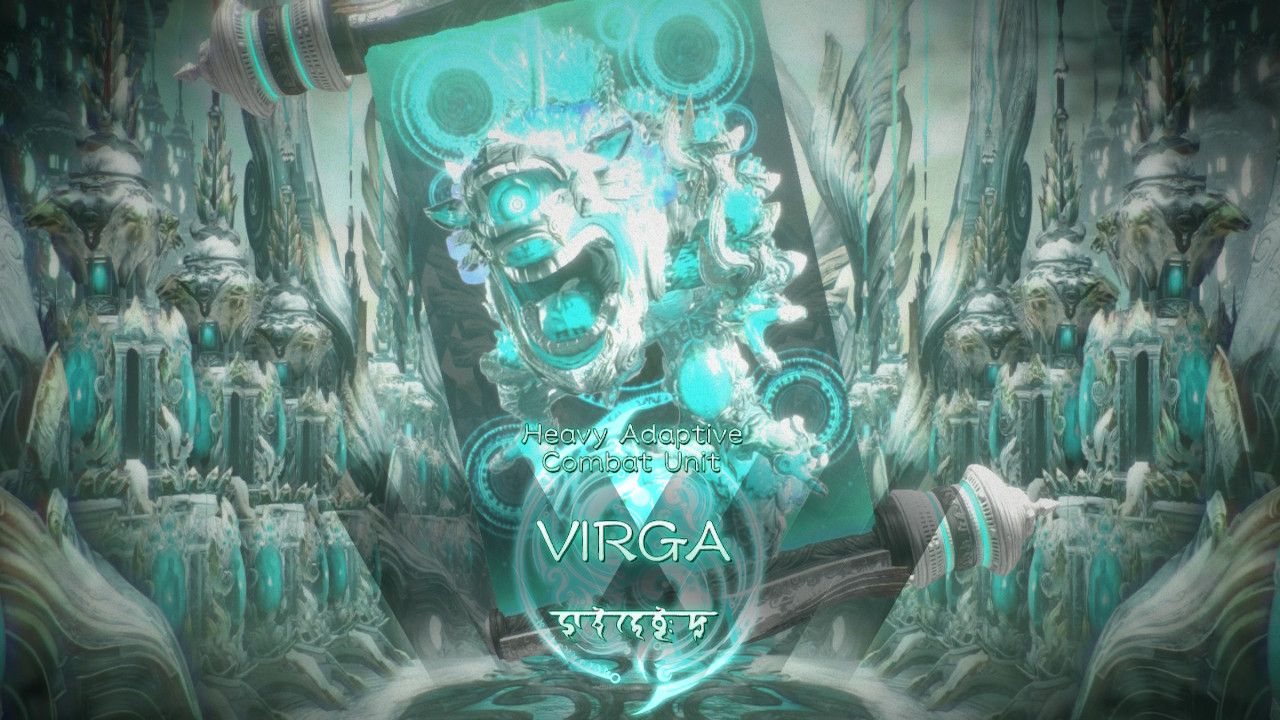 As soon as you begin the chapter, look to your back and destroy the giant door, and this verse will trigger. This will be a tight fight against a Virga, and you won't have the train with you this time, so keep that in mind and be careful in your approach to this aggressive and long enemy. 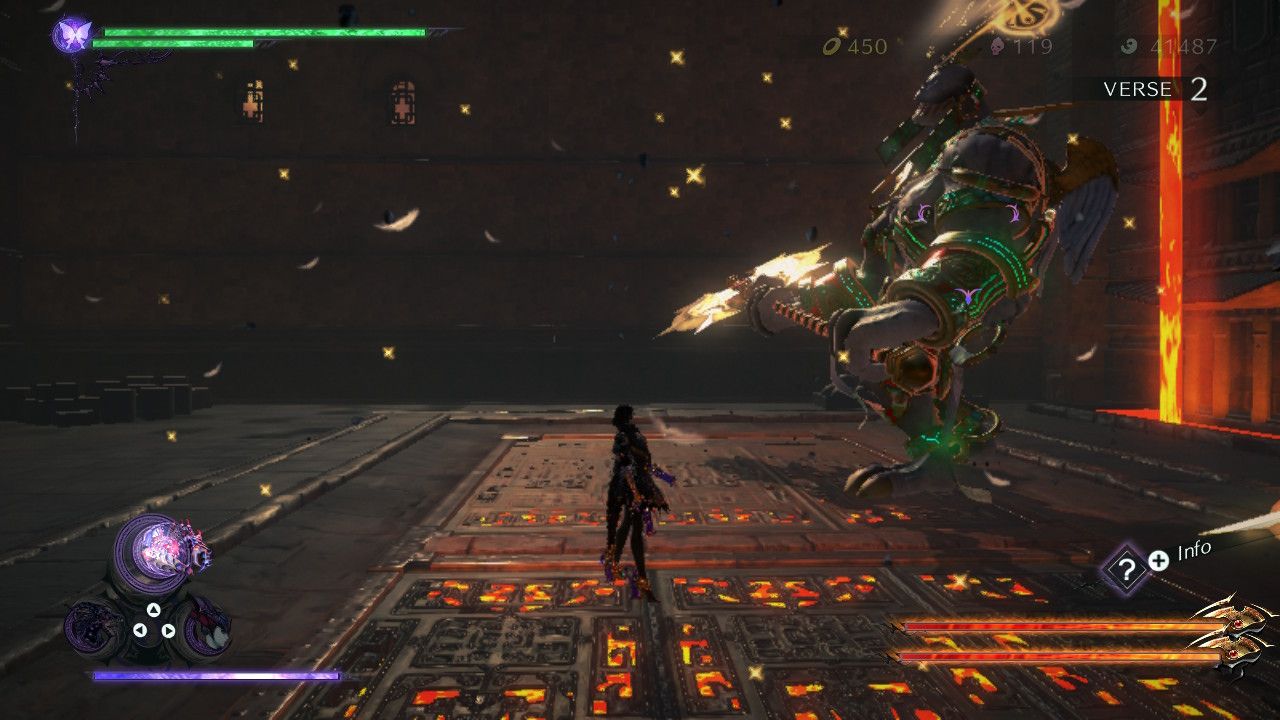 If you look to the right from Verse 1, you will be able to proceed to a small arena with a golden portal in it. Once you reach it, a fight will ensue against two Beloved. Be sure to avoid their axes and you should be fine to continue. 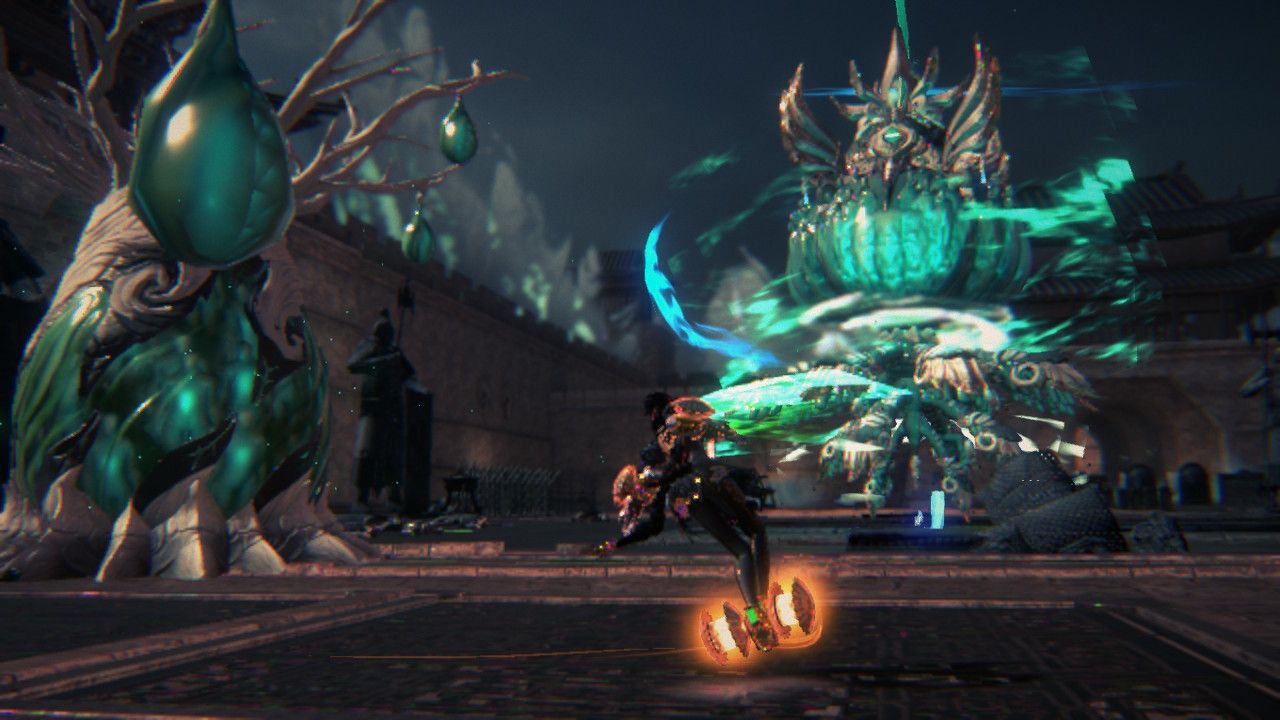 From the beginning point, make a step towards the statues and a fight will ensue against some Duplicatus, Nebulosus, and Pannus. Be sure to destroy the Duplicatus first so no more Nebulosus spawn, and then take care of the Pannus, and you should be fine. 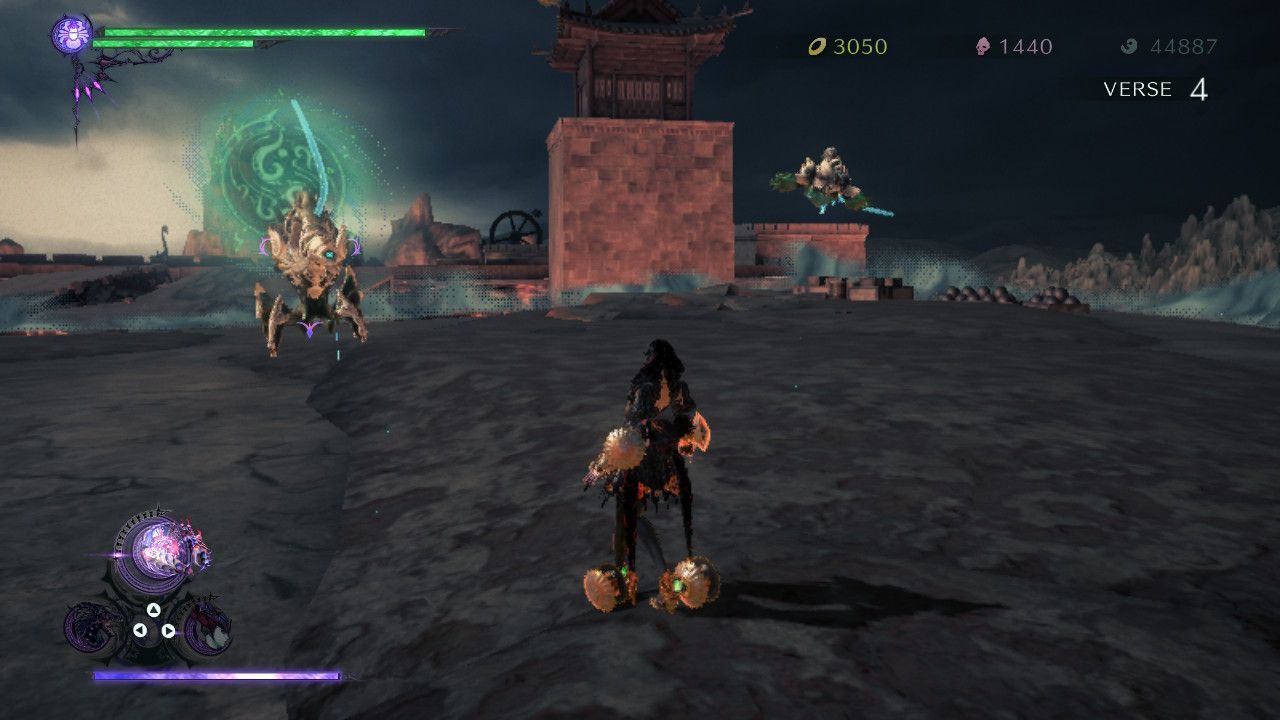 Continue through the previously blocked gate and as you proceed you will see some projectiles destroying a bridge. Employ the beast mode you deem best and traverse above the lava to the other side, and once you climb up a few steps in this new section, this battle will begin. This is just some Cavum and a Lacunosus, so you shouldn't find any issues. 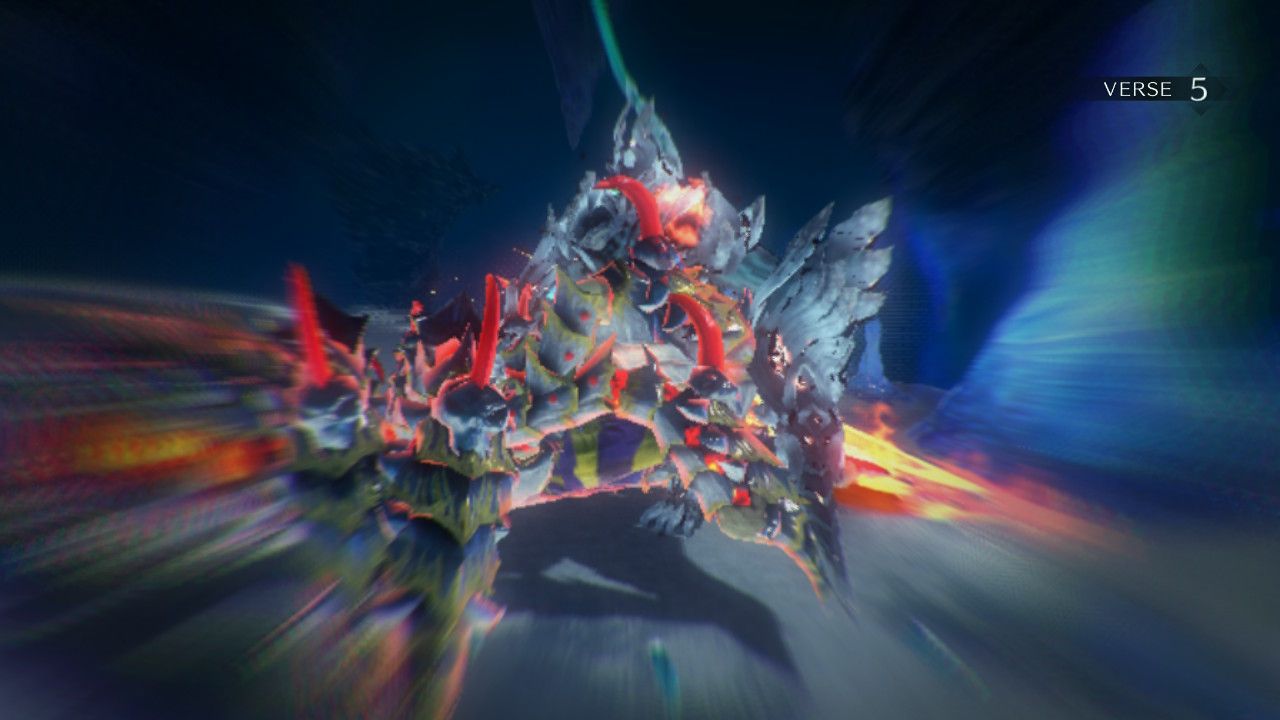 Jump from platform to platform until you reach the main road with a portal to the Gates of Hell, and if you go to the right of the Verse #6 arena (depicted below), you will notice a set of stairs that lead to a purple portal. This verse will be a Challenge where you'll have to accumulate enough combo points before the timer runs out. Succeed on this, and you will obtain a Broken Moon Pearl as a reward. 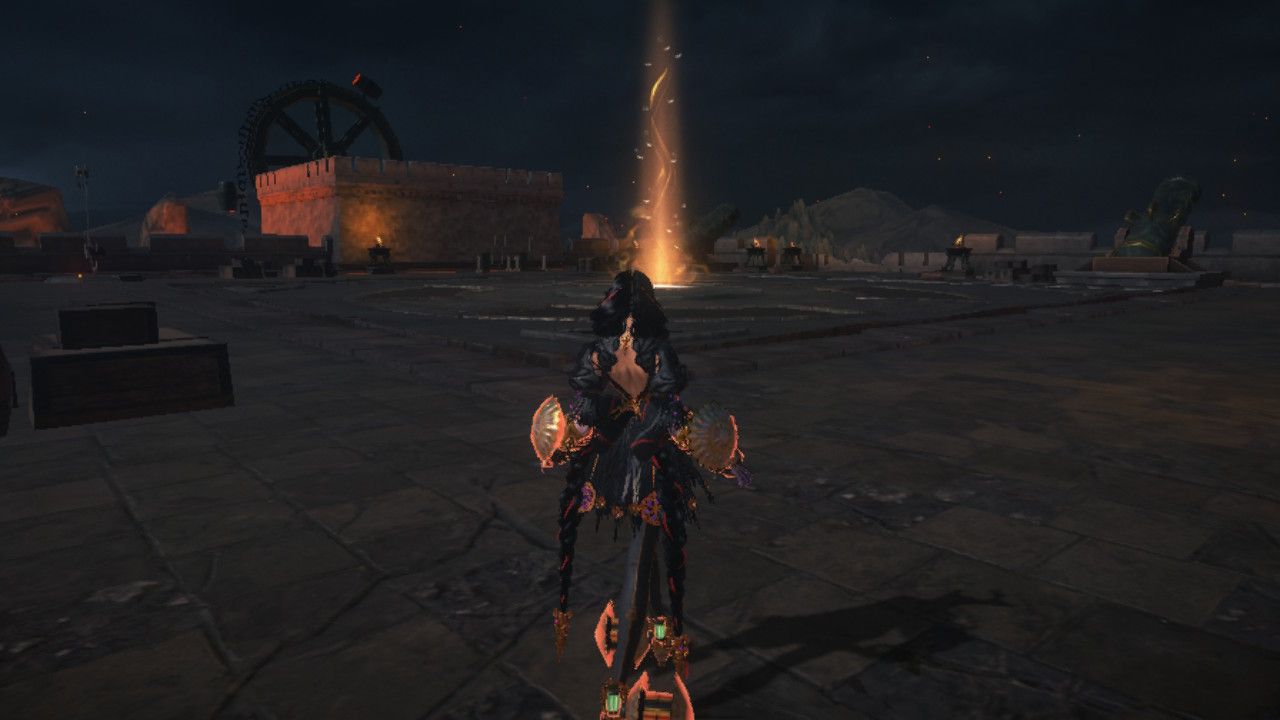 Just as you reach the main road, look to your right and you will clearly see this Paradiso portal. Once you reach it, a verse will trigger and you'll have to face a Beloved and several Acceptances, so be sure to hit them as hard as possible, otherwise, they can present a problem in a group. 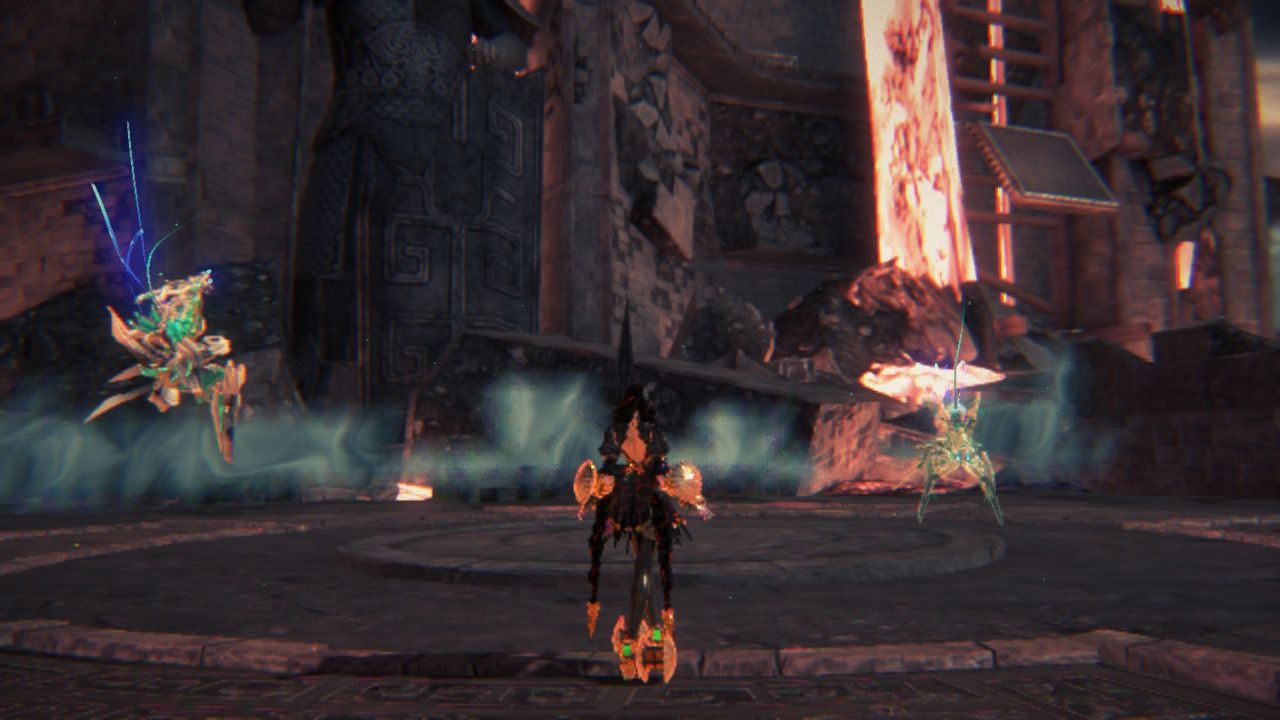 The moment you walk down the main road, a cutscene will play and everything will start to collapse into the lava. Run as fast as you can and once you arrive on safe ground, this verse will begin. This fight will test you against a few Mediocris, which seems fitting because this battle is pretty mediocre, just cruise through it and continue. 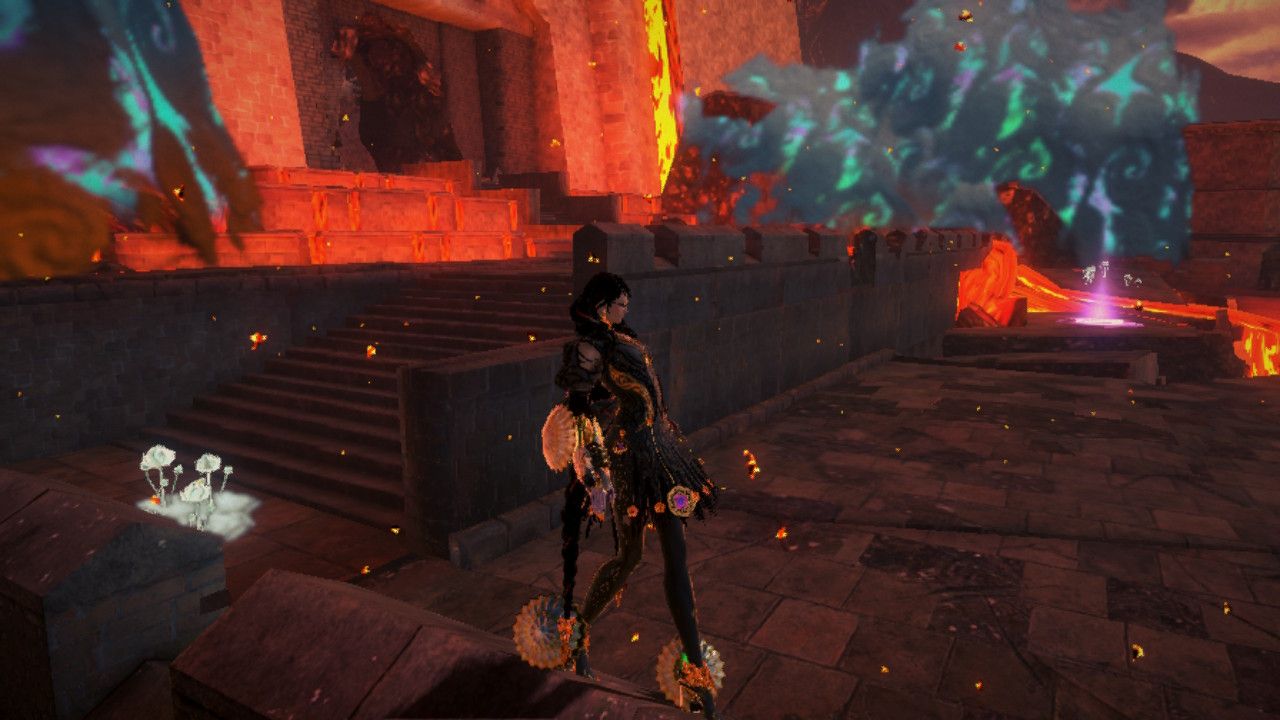 Take the elevator to your left, and once you're at the top, you will see a purple portal. This verse will be a Challenge where you'll have to stay up in the air not touching the ground more than three times, until the timer runs out. Succeed on this, and you will obtain a Witch heart as a reward. 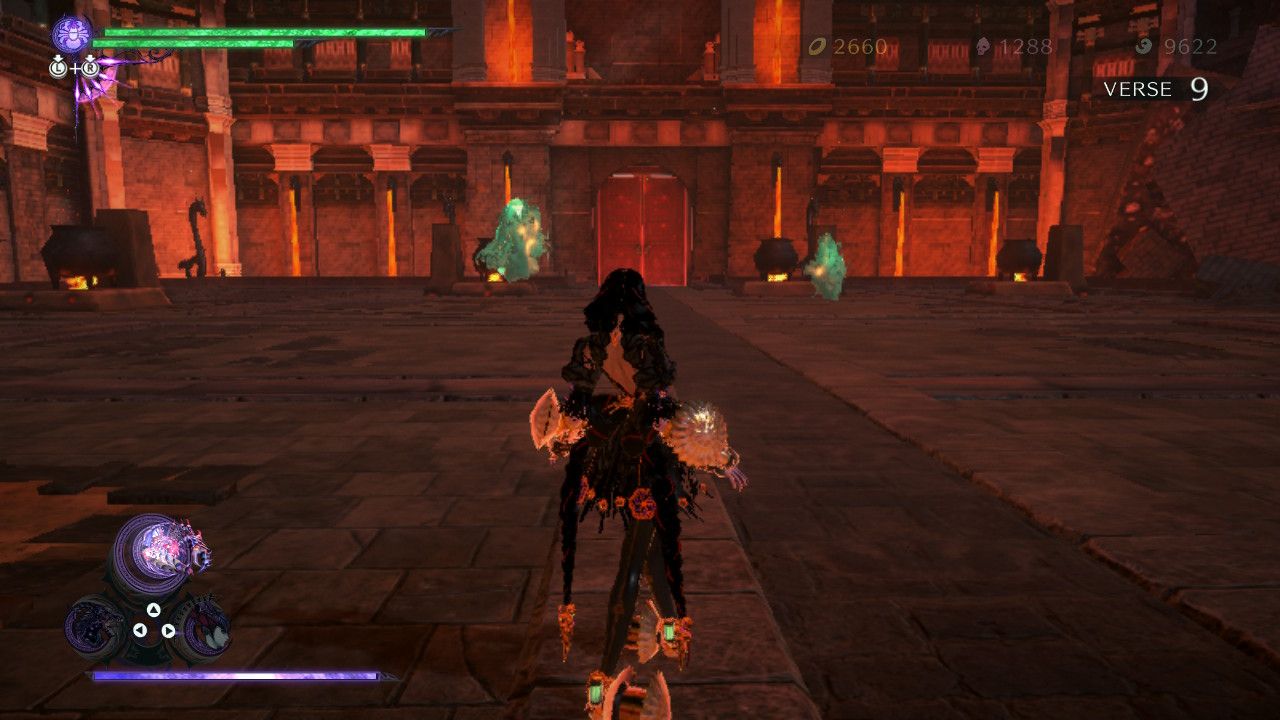 Enter the castle at the top, and you will trigger this verse. This will be a team-up of two familiar enemies, Floccus and Fractus. Choose one and focus on eliminating them one by one or they can be an issue if you take too long to defeat them. They will also receive the aid of several Stratus, but at this point, those won't be a problem.

However, the problem begins when the Pyrocumulus joins the party, and while its moves are similar to the Cumulonimbus, you must watch out for its added fire damage. Deplete some HP bars, and a cutscene will pop up. 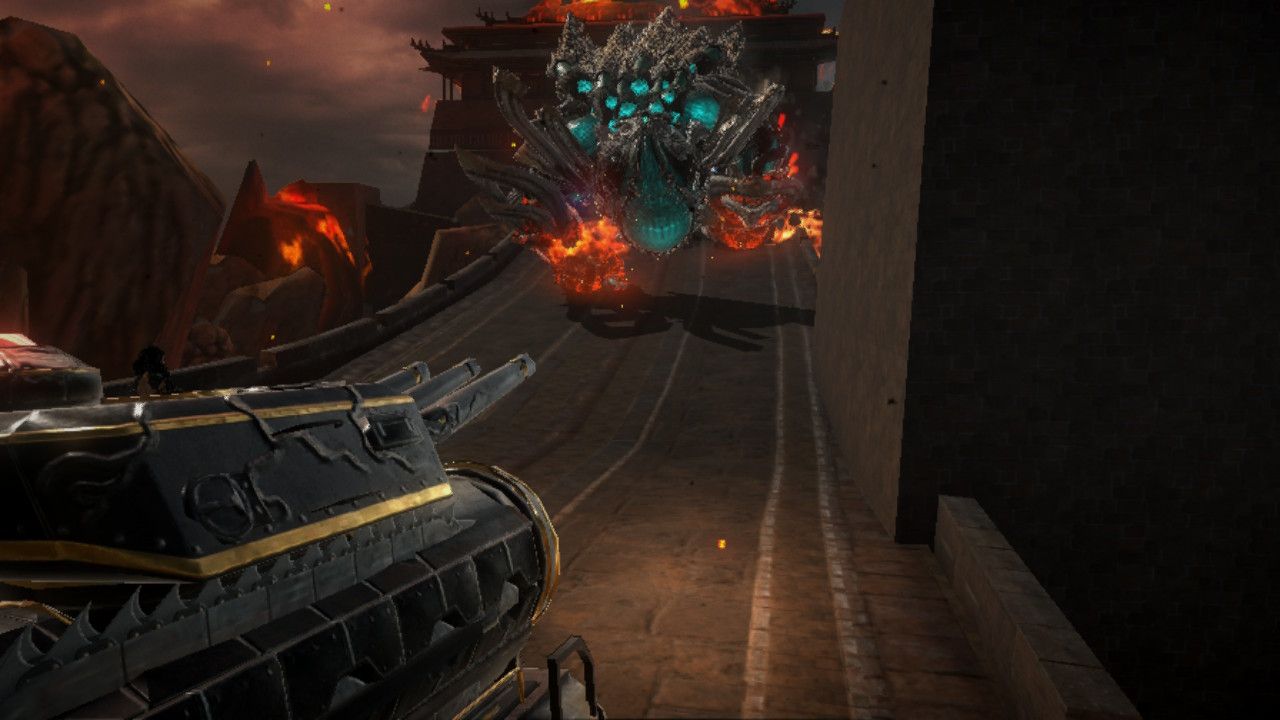 After a cutscene, this amazing action sequence will have you piloting the turret gun in your counterpart's demonic train. Hit the debris while it flies in your direction to destroy it and keep your crosshair in the monster's face, and you should be fine. 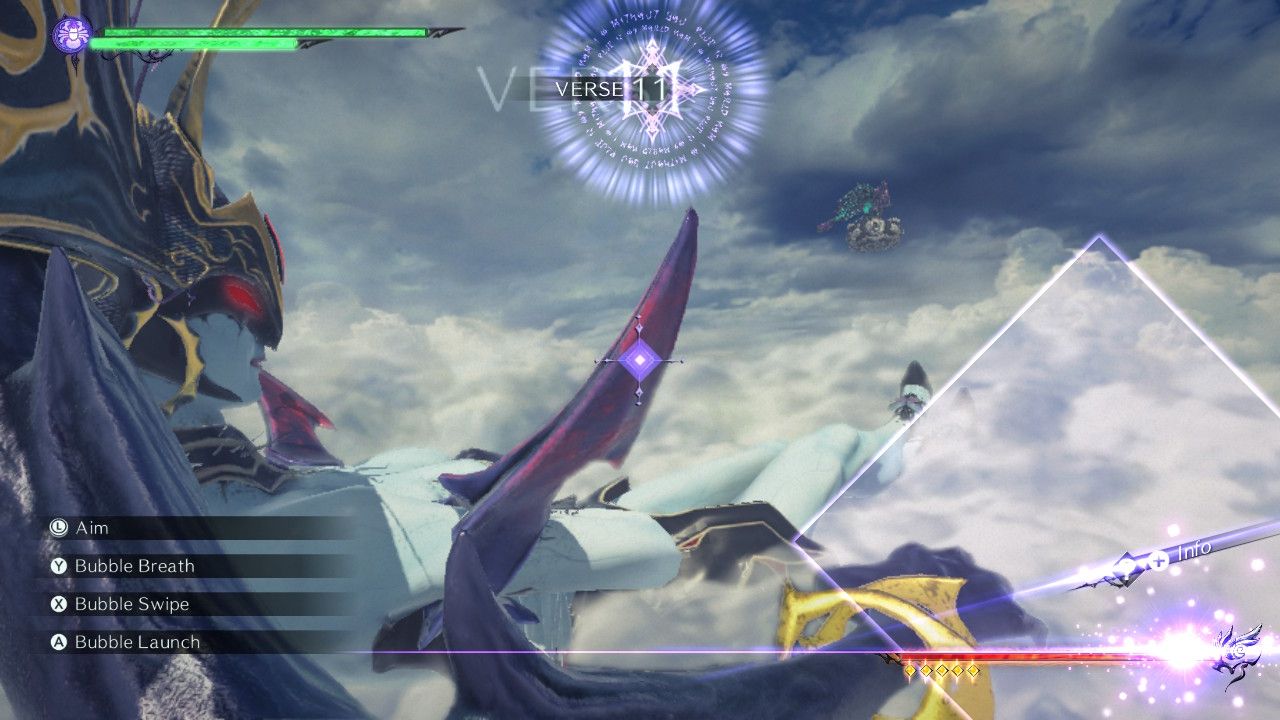 Once the train sequence is over, you will have to use Madama Butterfly in the final fight against the Arch-Pyrocumulus. Be sure to attack him using this Infernal Demon's commands as often as you can, and this pretty simple fight should be over in no time. 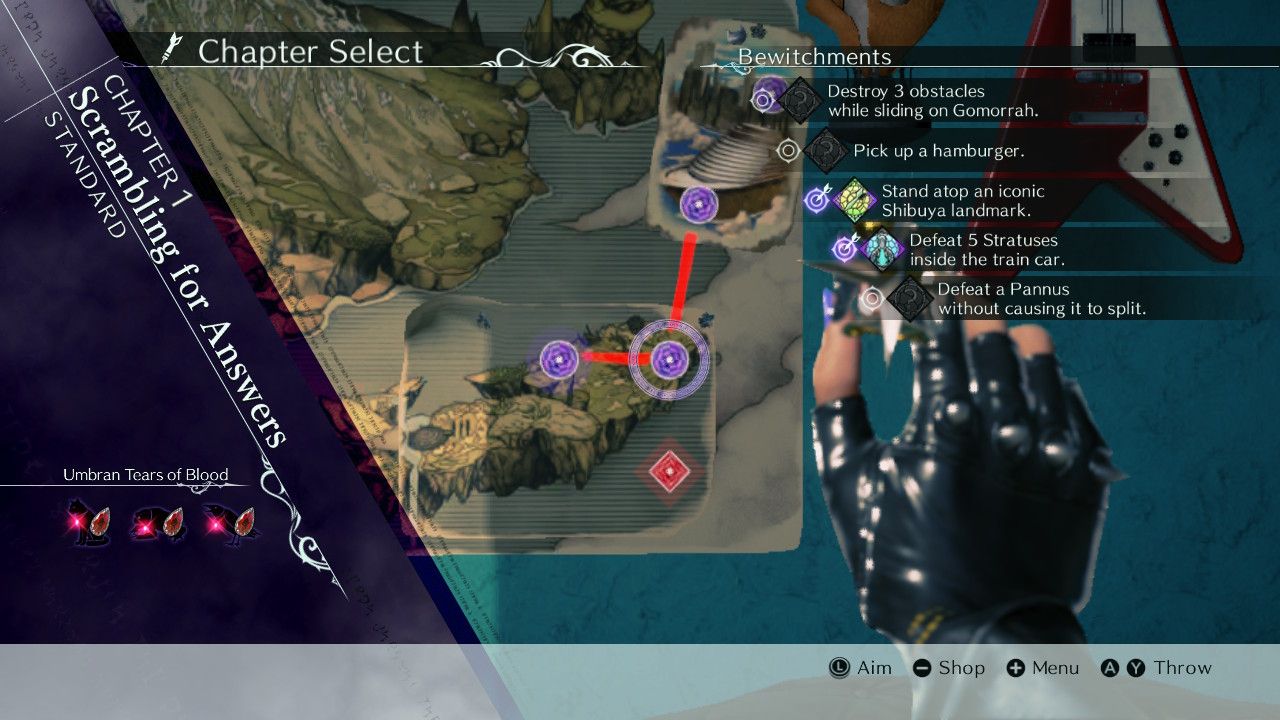 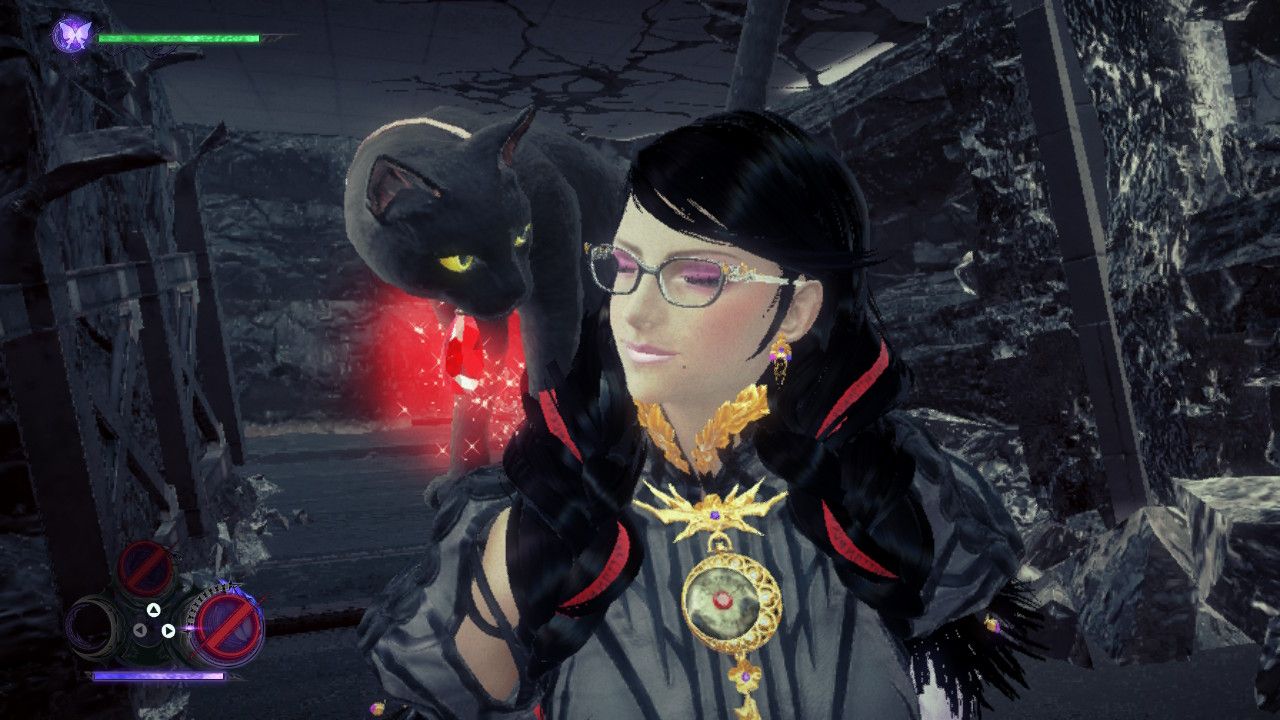 Across every chapter, you will find three animals called Umbran Tears Of Blood. Collecting the three of them in each chapter will unlock its alternative version, with new challenges and rewards.