Drakania is the newest class in Black Desert Mobile who comes fully ascended upon character creation. The Draconic bloodline flows through her veins, and the ferocity with which she defends the last of her kin makes her an overwhelming force on the battlefield.

Drakania uses a shard forged from her dragon scales to channel draconic power into her great sword, Slayer, which then releases the ancient power into seismic shock waves capable of obliterating entire hordes at once. Even with 23 classes to choose from, role-playing as a draconic warrior will redefine immense power and give you a fresh dragon-size breath of air to liven up your gameplay. 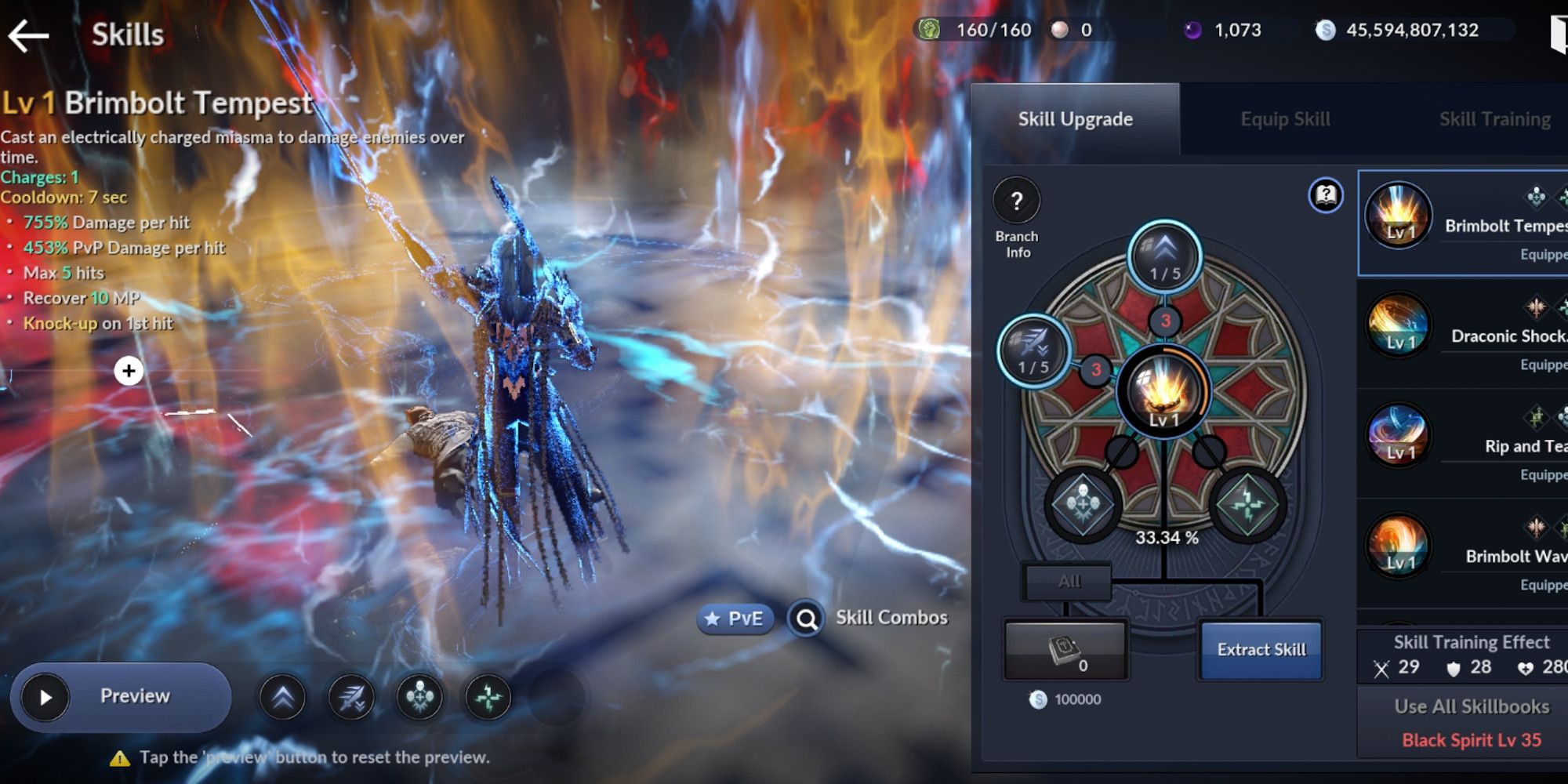 Drakania is an overpowered class, which makes her easy for beginners to control as all of her moves create a devastating impact. That being said, it's always good to understand the tactical applications of the moves you're executing, so you can better strategize when to use them for the greatest possible effects.

To that end, we've highlighted the best early game skills. The first four skills we've listed are the first-level skills available upon character creation. While the following skills are ones you unlock every tenth level.

Brimbolt Tempest is the optimal opener with its far-reaching AoE that inflicts electrical damage to the enemies. The electrical charge remains in effect across the affected area and continues afflicting enemies over time. It's got a hefty initial hit and knockback effect that sets Drakania up to pile on her other earth-splitting assaults while Brimbolt Tempest continues to chip away at enemies with its residual impediments, overwhelming enemies right from the start. This skill also recovers the Drakania's MP by 10.

Draconic Shockwave is the least substantial of the four starter moves in terms of damage, though it still deals the expected knockback, 10 MP recovery, and a Forward Guard while executing the move. This skill can also be chained together up to five times for maximum effect.

Brimbolt Wave provides Drakania with Super Armor while executing the attack and grants a 10% attack bonus while Iconic Charge is in effect along with the usual knockback effect inflicted by her great sword.

Rip and Tear causes the most substantial damage per hit of all four attacks you'll start with, and it can be held down to chain up to four vicious attacks. Rip and Tear will daze enemies on hit and cause knockback on the final blow. It also grants your Drakania warrior 10 MP.

Vorpal Thrust is the first additional move you'll unlock at level 10. It's not incredibly powerful, but it does offer Super Armour protection, recovers the usual 10 MP, and can be used as a continuous attack up to three times, stunning enemies with each hit and dazing them on the last blow.

Wings of Ruin is unlocked at level 20 and is by far the most potent attack in Drakania's early game. You can give that power a 5% increase by holding the skill to charge it up. A fully charged Wings of Ruin can smash through an enemy's Forward Guard for 33% damage while Ionic Overflow is active. While charging up the attack you cannot be grabbed by enemies and Super Armor is activated, making you virtually invincible while executing the attack.

Dragon Glide is an evasive ability that you'll unlock at level 30. Materializing a set of dragon wings, you'll be able to swoop from one end of the battlefield to the other. This skill renders you invincible while in motion and can be held down to grant additional movement at the cost of 30 MP.

Dragon Glide is best used to quickly reposition yourself around the battlefield or as an emergency evasive maneuver in a pinch, so be careful not to spam this move so as not to burn all of that MP you've been saving. (It is best slotted on the second wheel, as you should only need it in particular instances.)

Though your draconic energy may seem boundless, it's still important to take a look at the tactical application of each move as you unlock them. You can find a preview of each skill on the in-game "Skills" page. You'll also want to make use of the customizable skill wheel layout located under the "Equip Skills" tab found on that page. By familiarizing yourself with each skill and personalizing their layout in an order that makes sense to you, you can utilize your overwhelming draconic power to its greatest effect.