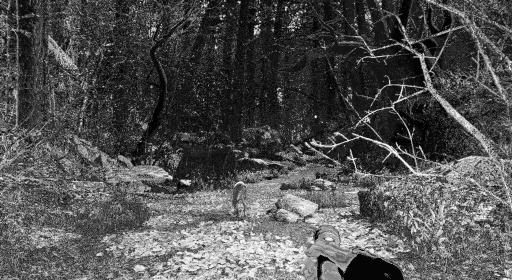 Blair Witch: Oculus Rift Edition will hit the Oculus Store three hours from when this article goes like at 10am PT $29.99. As with the Quest version, this is a full port of the original game for VR. Check out the trailer for the Rift version below.

Bloober says it’s added improvements to the PC version, and not just on the visual front. A new backpack has been added to the game and your dog companion, Bullet, even has improved AI. There are, of course, a number of graphics tweaks including better models, lighting and improved draw distance.

We gave the Quest version of the game 4/5 when it launched last October. “As far as ports of non-VR games go, Blair Witch VR is quite great as it manages to be better than its non-VR predecessor in basically every way,” we wrote. “Frankly, this setting fits VR like a blood-soaked glove and I hope to see more Blair Witch games in VR after this.”

With that said, we noted the game wasn’t quite as scary as other VR horror hits like Resident Evil 7.

Meanwhile, the game will also be arriving on PSVR later this summer, but no official date for that just yet. No word on a possible SteamVR version yet either.

Will you be picking up Blair Witch on Oculus Rift? Let us know in the comments below!