Blaize, a company developing AI edge computing platforms for automotive, enterprise, and computer vision markets, today announced that it raised $71 million in series D funding led by Franklin Templeton and Temasek, with participation from Denso and other new and existing backers. The company says that the funds will be used to support its go-to-market and R&D efforts.

The pandemic has accelerated the adoption of edge computing, or computation and data storage that’s located close to where it’s needed. According to the Linux Foundation’s State of the Edge report, digital health care, manufacturing, and retail businesses are particularly likely to expand their use of edge computing by 2028. This is largely because of the technology’s ability to improve response times and save bandwidth while enabling less constrained data analysis. 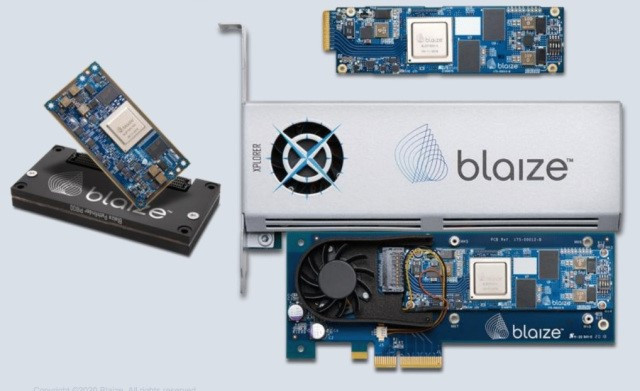 Blaize’s chips leverage graph computing and dynamic streaming to minimize non-computational data movement. Models can be built to integrate functions such as image signal processing, represented as graphs. And developers can build multiple models on a single architecture through to runtime.

Blaize’s cofounders — Dinakar Munagala, Ke Yin, Satyaki Koneru, and Val Cook — were at Intel prior to starting the company, developing several generations of GPUs. In 2010, working out of a spare bedroom, they eventually gained support and funding from venture, angel, and strategic investors including Dado Banatao.

“Customers are choosing Blaize … because we address their unmet need for products purpose-built for the requirements of edge AI,” Munagala told VentureBeat via email. “We win by achieving a better match for customer requirements with a balance of performance, power, latency, and cost … Programmability — and the flexibility that it gives customers — is key in many accounts as well, as is our advanced software, which transforms productivity for faster return on investment from edge AI deployments.”

“Edge AI” describes architectures in which AI models are processed locally, on devices at the edge of the network. According to Markets and Markets, the global edge AI software market is anticipated to grow from $590 million in 2020 to $1.83 billion by 2026. Deloitte estimates more than 750 million edge AI chips that perform tasks on-device have been sold to date, representing $2.6 billion in revenue.

“On the supply side, [our software] helps hardware vendors to multiply their value. On the demand side, it allows consumers of the hardware to construct apps without a legion of data scientists,” Munagala said. “This is critical on the path to proliferation of AI at the edge, as is our … hardware offering that customers can use to build solutions for their specific needs. For edge AI deployments, users need both efficient hardware and the ability to enable business technologists to develop and deploy applications, rather than requiring the hiring of costly AI data science teams.”

“In the electric vehicle automotive market, low power to enable the key product feature of range extension is key. [And] in [the] retail shoplifting use case, Blaize [has been] favored for achieving the necessary performance and accuracy at one-fifth the power, while running multiple apps utilizing programmability,” Munagala said. “Overall, we have been able to successfully cope with the disruptions to business as usual that occurred due to the pandemic. As with most companies, our supply chain is affected. To mitigate the challenge, we proactively placed orders for products more than 18 months ahead. Some of our customer projects were temporarily affected by the pandemic, but now we are seeing a rebound.”

Blaize, which is headquartered in El Dorado Hills, California, has over 300 employees. It’s raised $155 million to date.