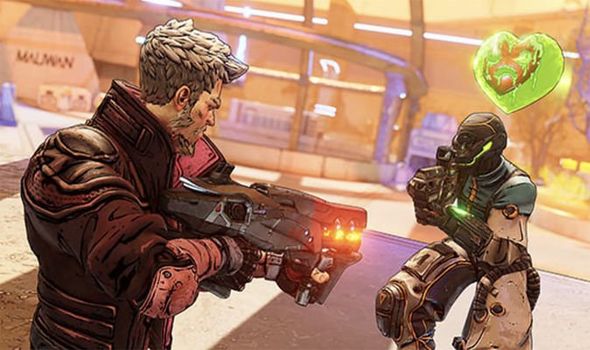 Borderlands 3 players are counting down to the release of the in-game Valentine’s Day event.

Free to all players, the Broken Hearts Day Valentine’s event launches alongside the next big update on February 13.

While the full patch notes are yet to be revealed, fans have been given a detailed look at the Broken Hearts Day event and rewards.

“Broken Hearts Day is fast approaching in the Borderlands, and Maurice, Sanctuary III’s resident sentient Saurian, is hoping you’ll assist with his ongoing study of the human condition as he turns his attention to our species’ courting rituals,” 2K reveals.

“You’ll be well rewarded for completing Maurice’s challenges during this new seasonal event revealed on episode five of The Borderlands Show, and don’t worry, you’re not being asked to do anything inappropriate.

“Simply shoot down the floating hearts that are swirling around enemies across the galaxy as you go about your regular Vault Hunter business.”

Players who shoot down enough floating hearts will unlock various rewards throughout the duration of the event.

Blizzard continues: “The hearts take several forms and break in different ways: some will fall to the ground with a fiery explosion, while others might drop loot or briefly turn enemies into allies, for example.

The update is scheduled to go live at 3pm in the US, which means UK fans can jump in at 11pm GMT on February 13.

The event runs for an entire week, so there’s plenty of time to unlock all of the rewards on offer.

Fans can even opt out of the event from the main menu, unless they join an online game where the host has Broken Hearts Day enabled.

“This will give you three additional skill points to add to your skill trees, allowing you to enhance your existing builds or even experiment with additional abilities,” 2K explains.

“To plan out your updated Vault Hunter builds, check out the skill tree builders on our character pages for Amara the Siren, FL4K the Beastmaster, Moze the Gunner, and Zane the Operative!”

Express Online will update the article with full patch notes when the February update goes live.