What do you get when you combine a dungeon-crawling RPG with an arcade-style beat-em-up? The answer is Team17's Bravery And Greed. This action-packed title puts you in the shoes of a warrior, rogue, amazon, or wizard tasked with searching the depths of dungeons for four ancient runes.

Action game and RPG fans will encounter unique learning curves when taking on Bravery And Greed. On the one hand, those accustomed to turn-based combat will have to improve their reflexes to fight through hordes of enemies. Yet, on the other hand, gamers accustomed to the straightforward nature of games like Final Fight will have to put in more effort to navigate the game's puzzling dungeons. Either way, we found these tips helpful for players of all backgrounds.

You Have To Lose To Win 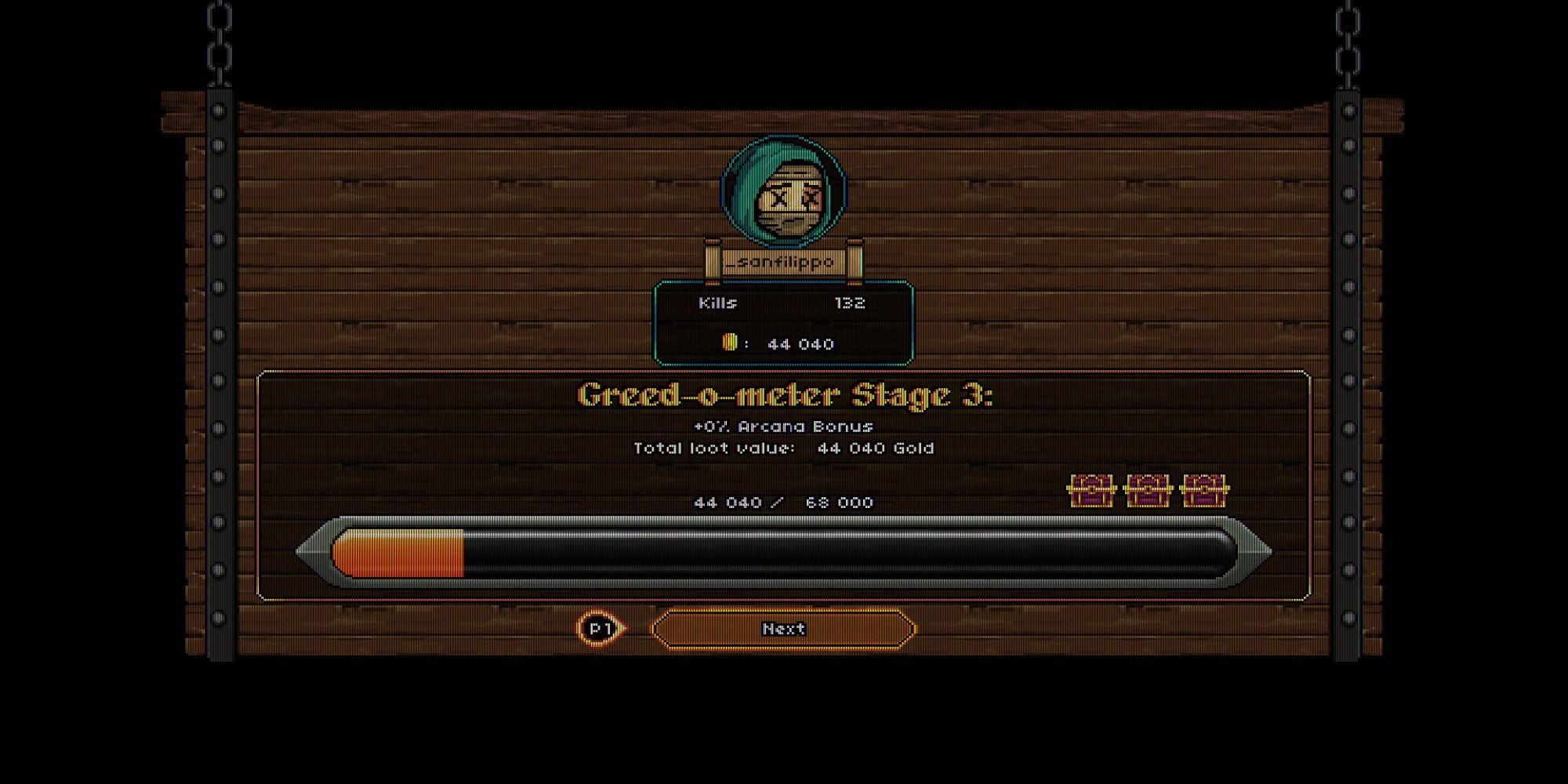 You only get one life to lose in Bravery And Greed. So, if you lose that life, it's game over. Fortunately, certain additions will carry over into your next playthrough. For instance, you can use any arcana you unlocked in your prior playthroughs in the next playthrough. Plus, once you unlock a new dungeon, you can start at that dungeon in the following playthroughs.

Therefore, it's natural for you to lose a handful of times before you conquer your first dungeon. However, with experience and practice, you'll improve during each run. And as you unlock new beneficial Arcana, like The Fool or The Magician, working through dungeons will become a sinch.

Explore As Much Of Each Dungeon As You Can 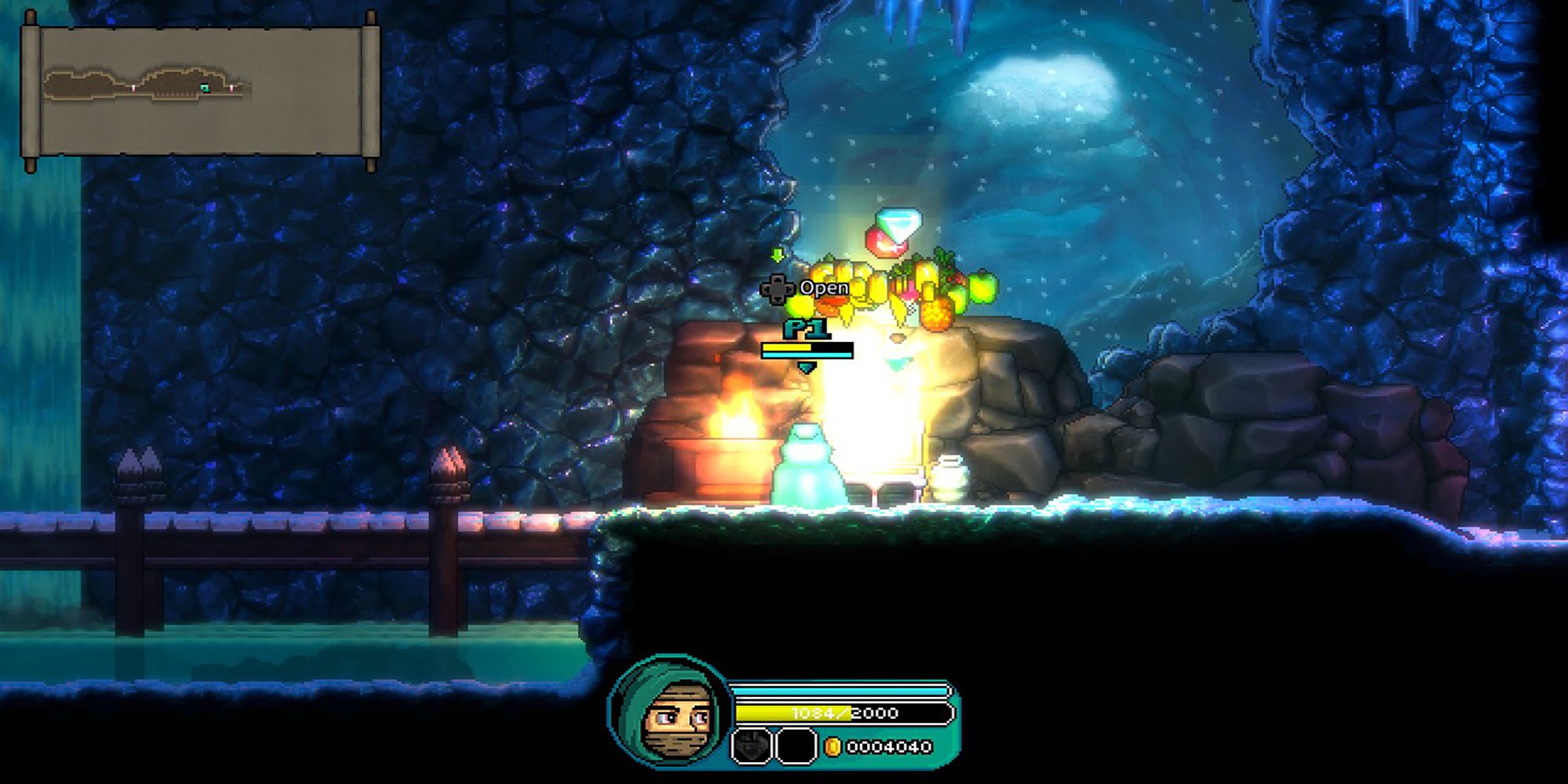 The goal of each dungeon run is to find the boss's lair and slay them, thus acquiring one of the four ancient runes. However, rushing to find that boss's lair is poor judgment. Instead, exploring every nook and cranny of the dungeon will stack the odds in your favor.

You'll rake in plenty of treasures while exploring the depths of a dungeon. For instance, sometimes dungeons have shop sections where you can buy gear, potions, and food. Furthermore, defeating the monsters in each room unlocks treasure chests filled with gold and other items. Lastly, you'll discover prayer shrines that grant combat-enhancing abilities.

Pray To The Deity That Suits Your Playstyle 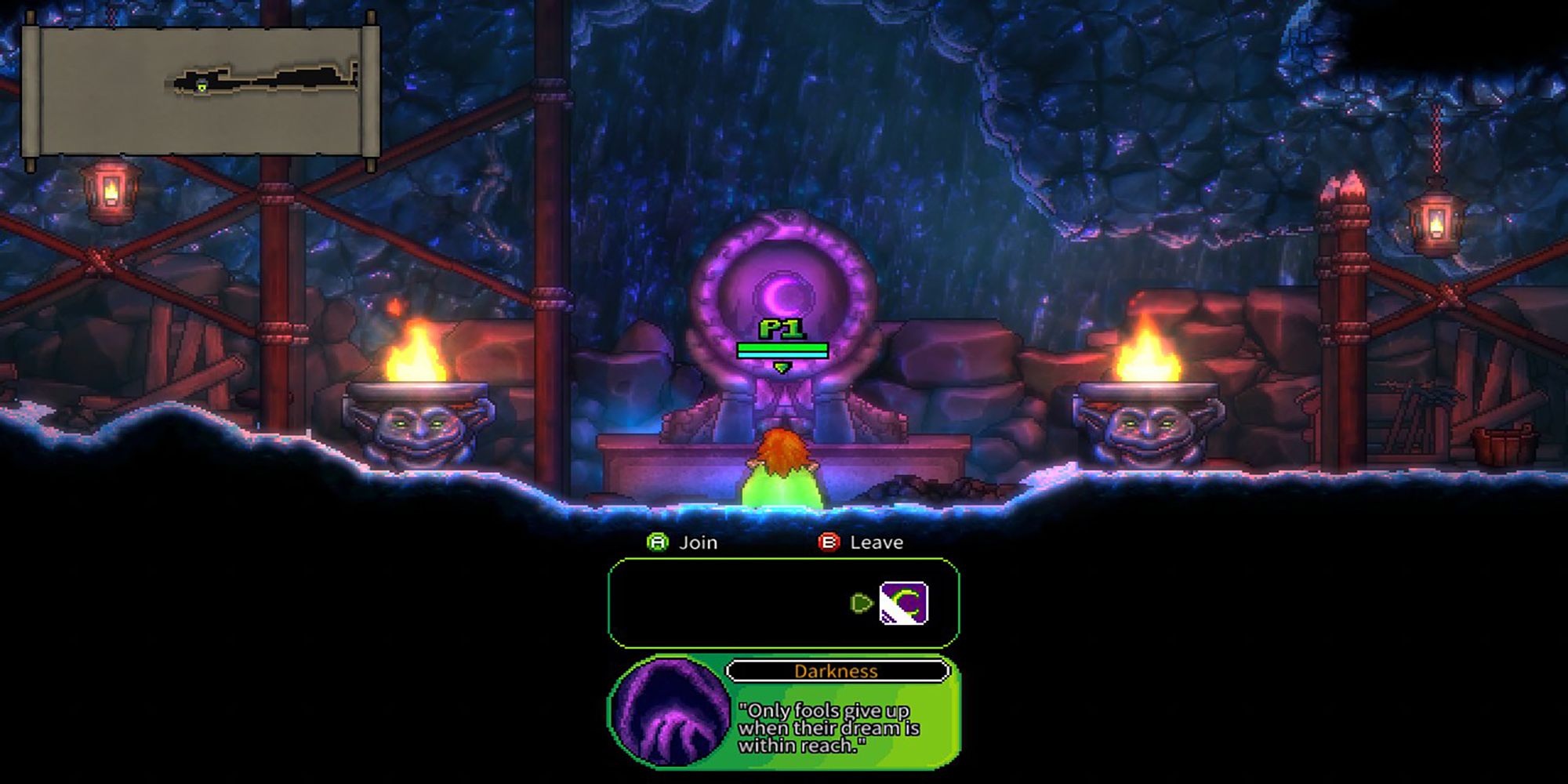 One of Bravery And Greed's most effective tools is the prayer shrine. These ritual altars allow your character to receive skill-enhancing abilities from the deity of your choice. However, once you choose your God, that is the God you will receive skills from for the rest of the game. In short, you cannot switch Gods, not even between dungeons.

Therefore, choosing a God whose abilities complement your playstyle and strategy is vital. For instance, If you are a player who rushes into battle without bothering to block or parry incoming attacks, you shouldn't follow the defense-oriented God Of Order. Instead, you would be better off following the aggressive God Of Chaos or the health-improving God Of Life.

Use The Map To Track What's Left To Explore 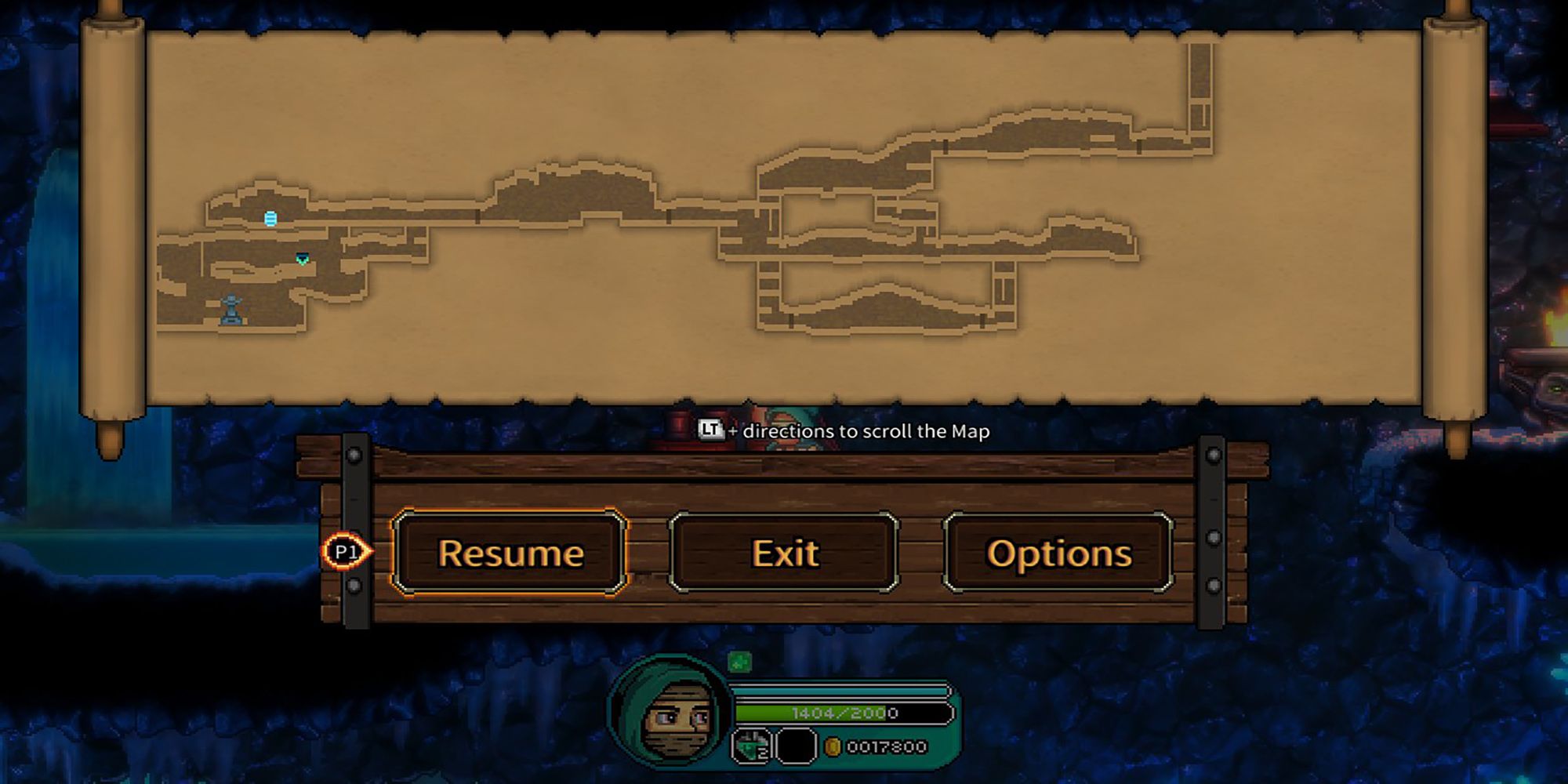 While each dungeon has unique, identifying qualities, you'll never walk through the same dungeon twice. Part of Bravery And Greed's appeal is that it uses randomly generated dungeon maps to keep gameplay fresh. Therefore, you cannot depend on the same path to lead you to the dungeon's boss's lair every time.

Considering this randomness, you'll find plenty of value when referring to your map. First, you can open the map via the pause menu. Then, input directions while holding onto the left trigger to scroll through the map. Any areas you have traveled through will be visible.

You can also review the location of checkpoints and items via this map. The little green arrow marks your position on the map. Bright blue ovals indicate the portals you traveled through. Statues will mark landmarks like prayer shrines. In short, any points of interest are unmissable on the map.

Quick-Travel Across The Map With Portals 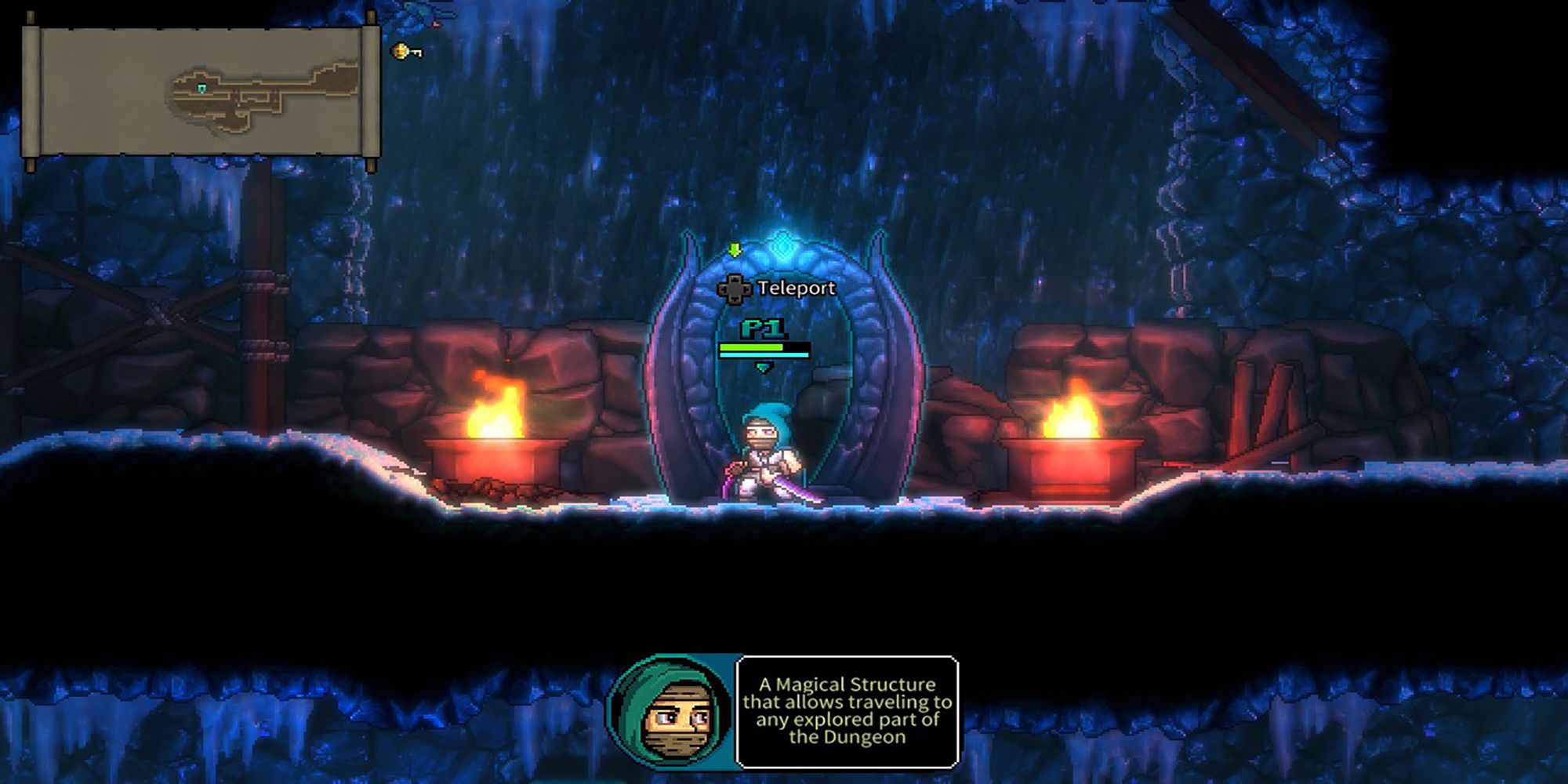 Suppose you approached the boss's lair, but your map indicates you have not yet traveled to certain parts of the dungeon. In this case, you can use a portal to transport quickly across the map. There are portals throughout the dungeon map. However, you'll always find one next to the door to the boss's lair.

Resources do not regenerate after you farm them. So, if you've already explored an area of the dungeon, there's no need to examine it again unless there is an uncharted section beyond it.

Give Yourself Time To Regenerate Lost Stamina 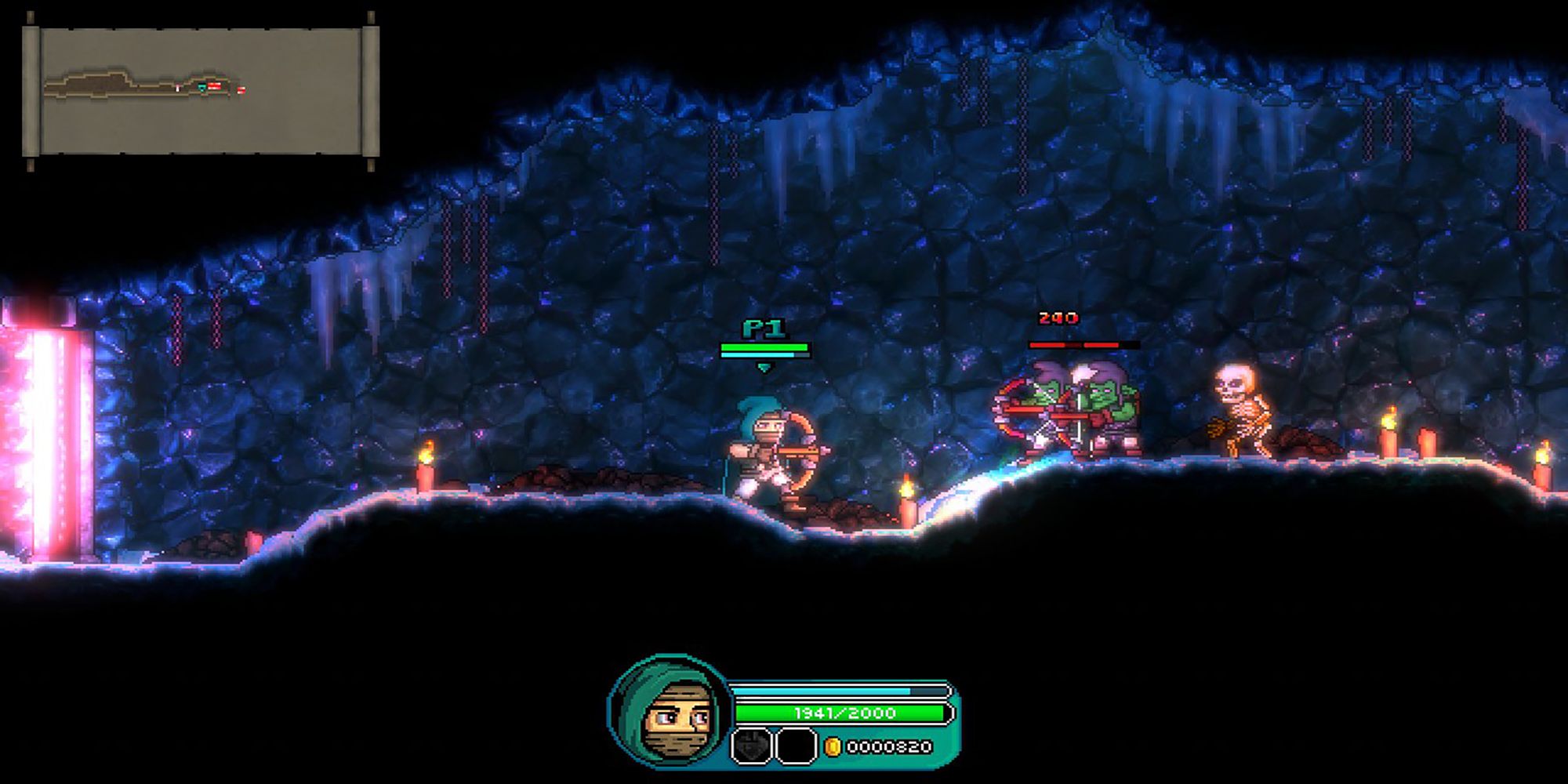 Most actions in Bravery And Greed, such as attacks and dodges, require stamina. This blue gauge sits above your HP bar and falls when your character exerts themself. You can only attack as much as this gauge allows. Therefore, if your stamina drops to zero, you must wait a set period for it to regenerate before you can attack again.

Due to stamina's limited yet regenerative nature, it's vital to periodically give yourself some breathing room from opponents while in battle. By doing so, you can re-enter combat with robust attack strings that will deal more damage. However, if you continue to attack without taking these brief rests, you risk getting caught off guard, especially when surrounded by hordes of monsters.

Rescue Followers To Fight By Your Side 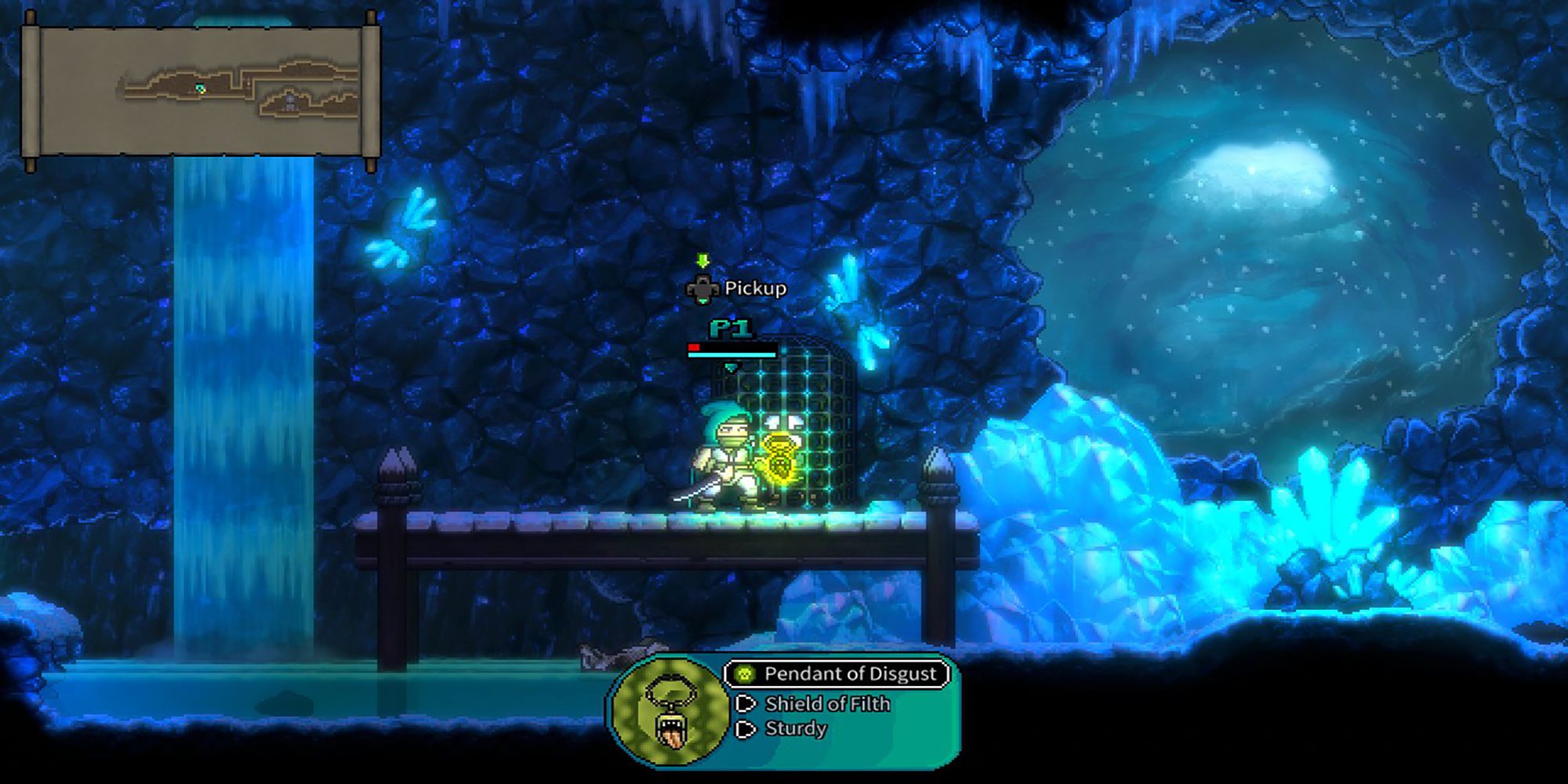 Dungeon crawling may feel intimidating when going solo. However, you can enlist followers to fight monsters with you. You'll find these trusty partners throughout the dungeon trapped in cages. When you rescue these captives, they'll join you and fight against your enemies until their health depletes.

There are several companions to find throughout the game, such as pet wolves and elven archers. Furthermore, you can have multiple followers travel with you simultaneously. Bringing followers with you, especially into boss lairs, will give you a huge advantage. As they say, there's strength in numbers.

Arcana Can Make The Game Easier Or Harder 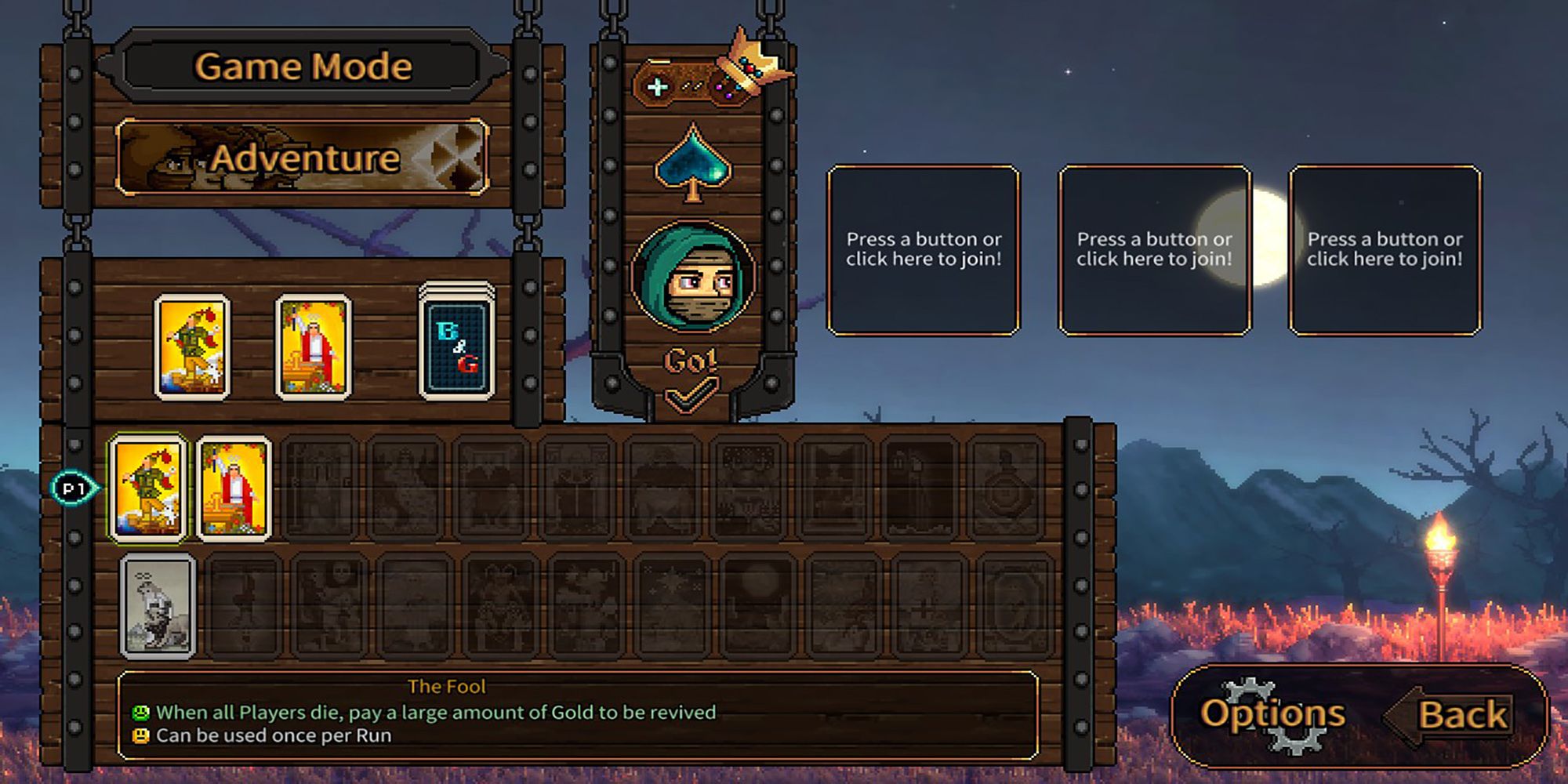 Bravery And Greed has several modifiers that adjust the game's difficulty, adding perks and disadvantages. These modifiers, called Arcana, take after the major cards featured in a tarot deck. You can unlock Arcand by completing game achievements. For example, completing The Great Equalizer achievement unlocks the Devil arcana.

Regarding arcana, some cards will add benefits. For example, The Fool allows you to pay a third of your gold to revive all your characters once per run. Other cards add challenges in exchange for higher rewards. One such card, The Tower, allows monster packs to travel freely through the dungeon. However, adding this card to your run rewards thirty percent more gold.

There's no limit to the number of arcana you can equip in a run. So, you can add as much or as little as you wish.

There Are Several Ways To Train 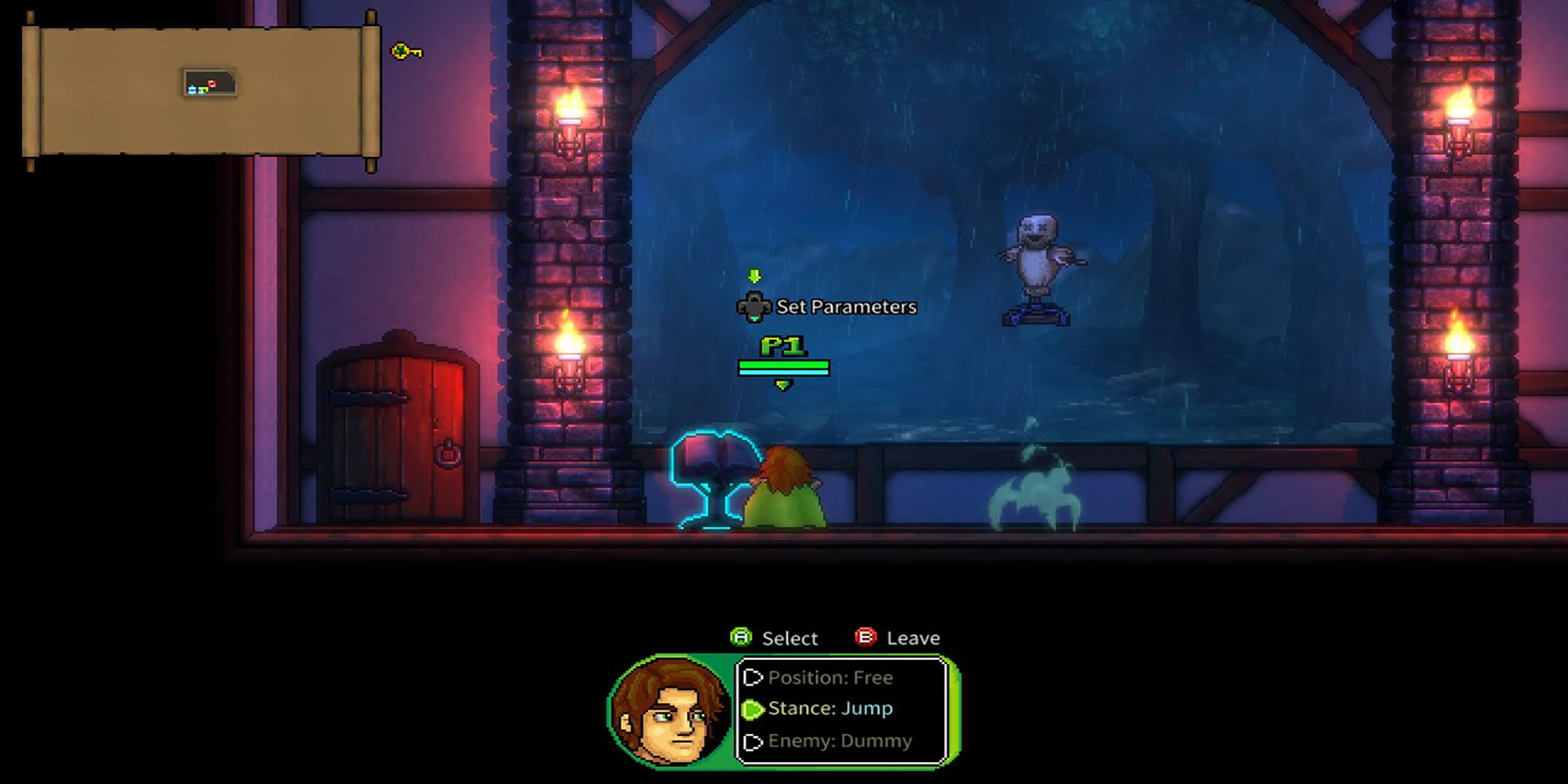 Bravery And Greed is a game won through trial and error. Luckily, there are several ways you can practice and improve your skills. For example, Class Training will teach you all the skills available to your character. Furthermore, Free Training allows you to experiment with the game's combat mechanics in a controlled environment.

Still, you can also find great ways to practice outside the game's training modes. For example, if you're looking for a challenge, Horde mode is a combat-focused mode that pits you against waves of enemies. Progressing through each wave will introduce you to new monsters, gear, and battle scenarios. So even if you barely make it through the first few waves, you'll come out of this mode with a better understanding of combat and how to best use your character's skills.