The first season of Call of Duty: Modern Warfare 2 launched with three new weapons, the M13B being one of them. Available through the DMZ game mode, the M13B is a fast-firing assault rifle that has virtually no recoil, similar to its appearance in MW2019.

Unlike its last iteration, the M13B in Modern Warfare 2 features little horizontal recoil at the cost of stealthy attachments. The gun feels incredibly accurate with no attachments, but using the right build turns the M13B into a mid-range monster in most game types, including Warzone. Today, we'll be showing two builds that turn the M13B into a flexible assault rifle for all play styles. 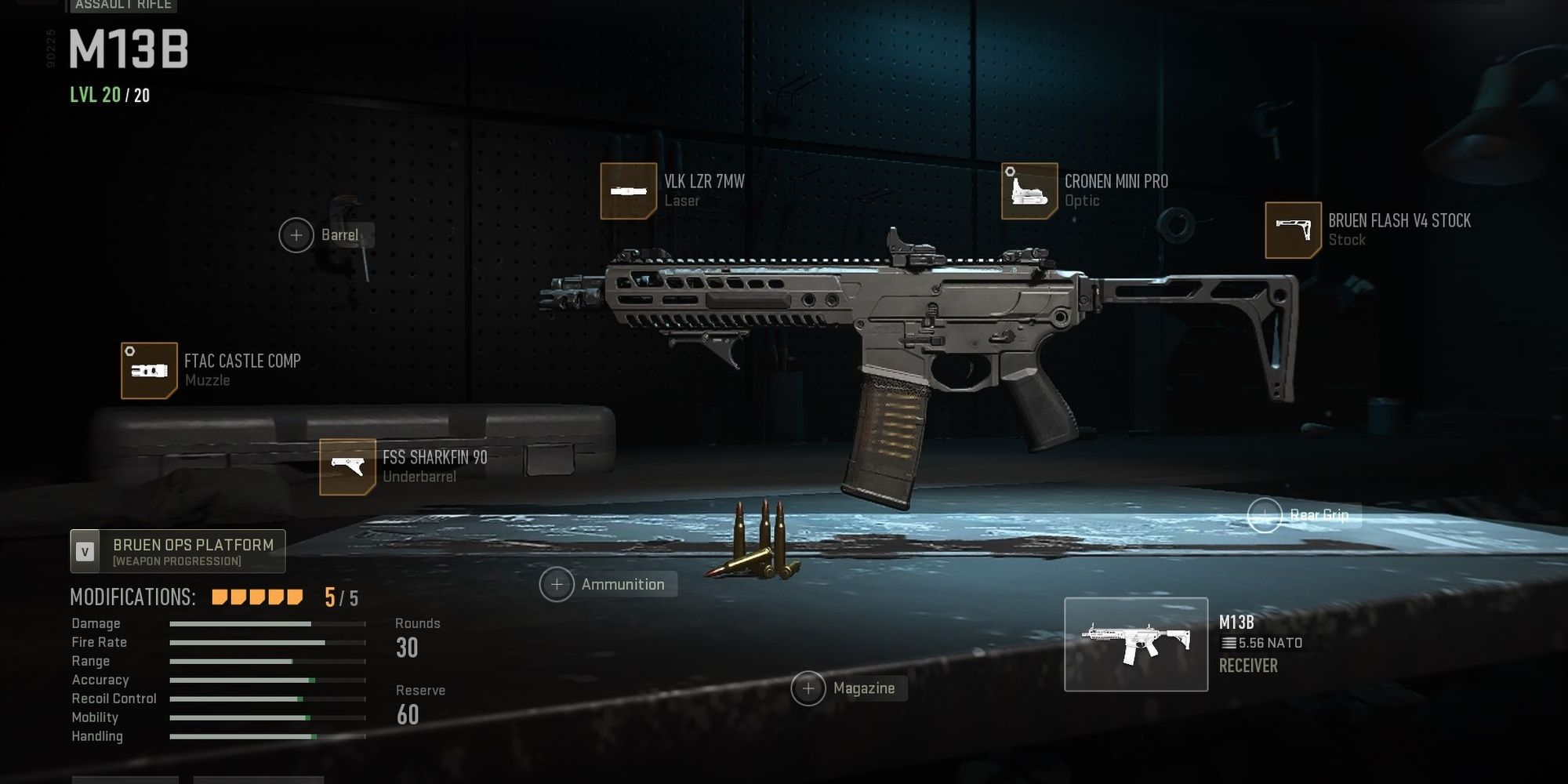 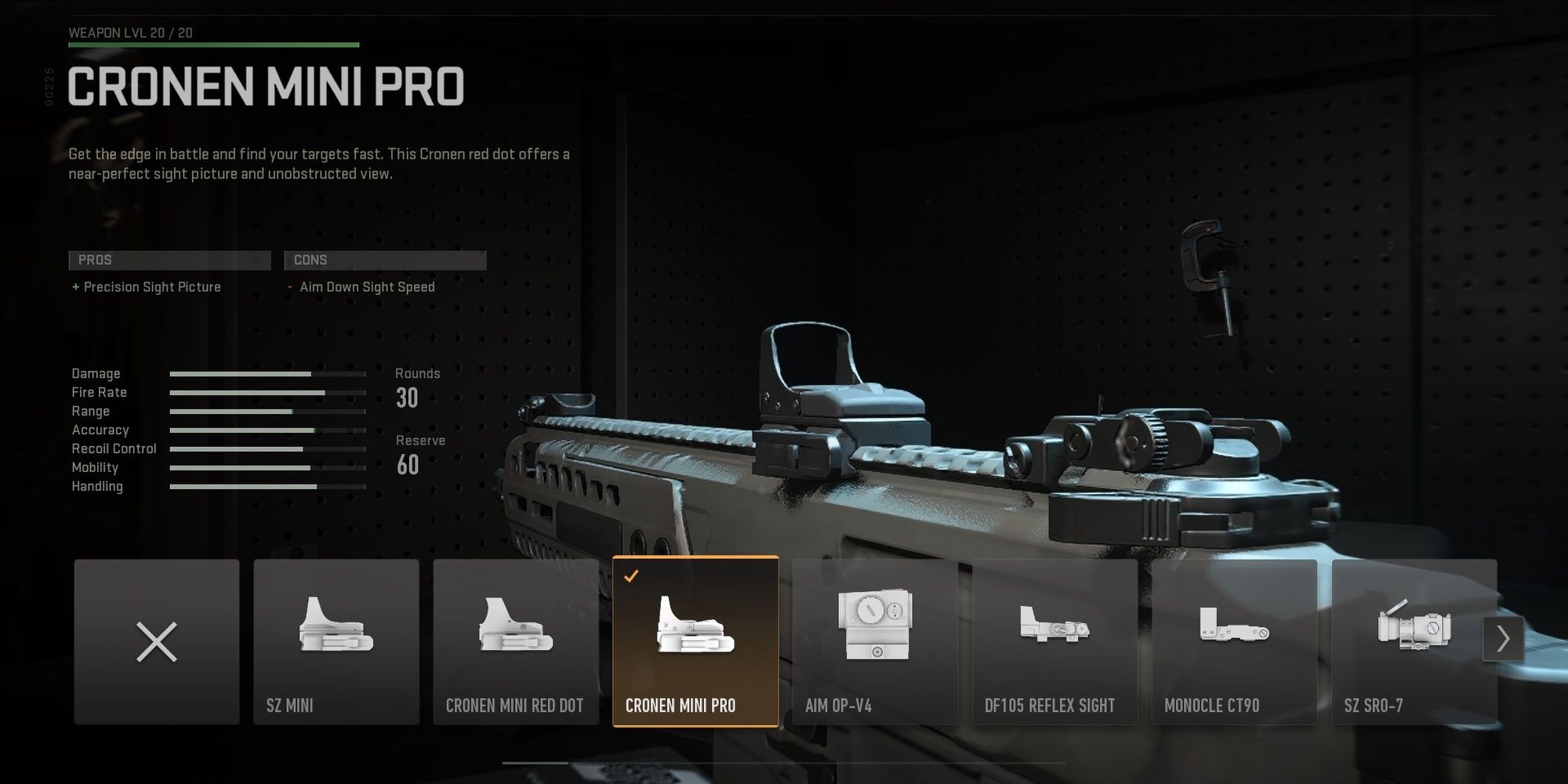 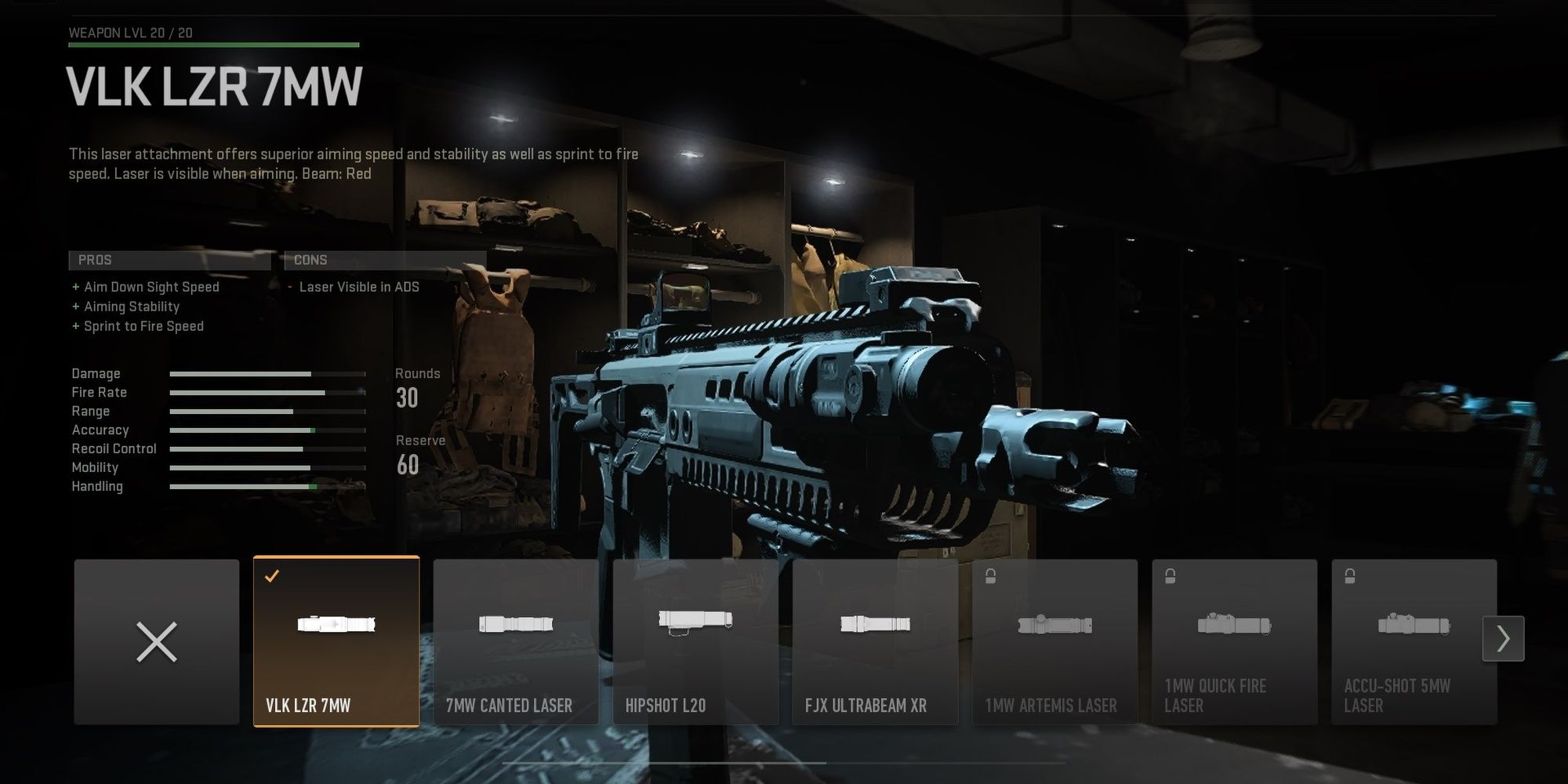 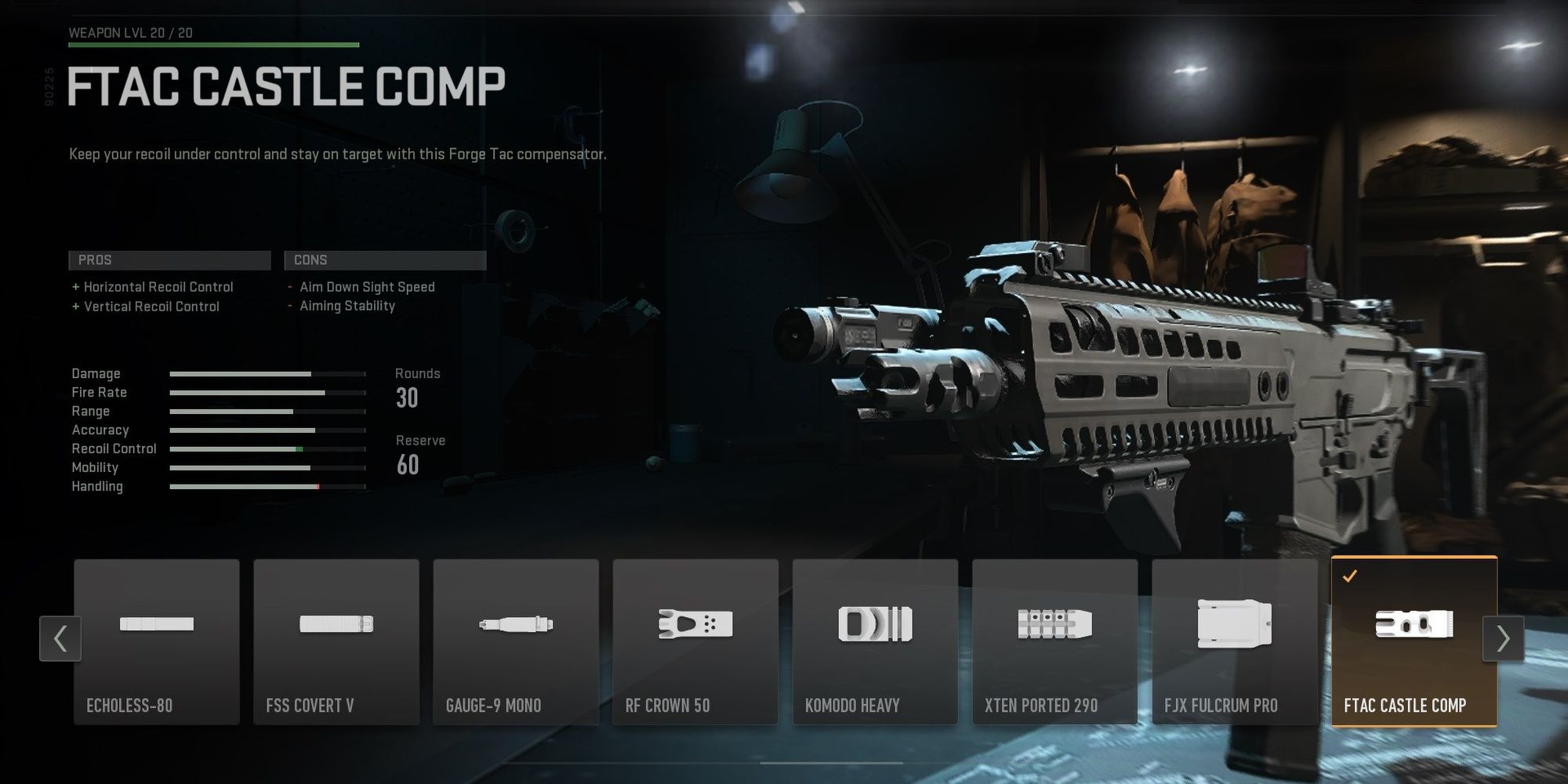 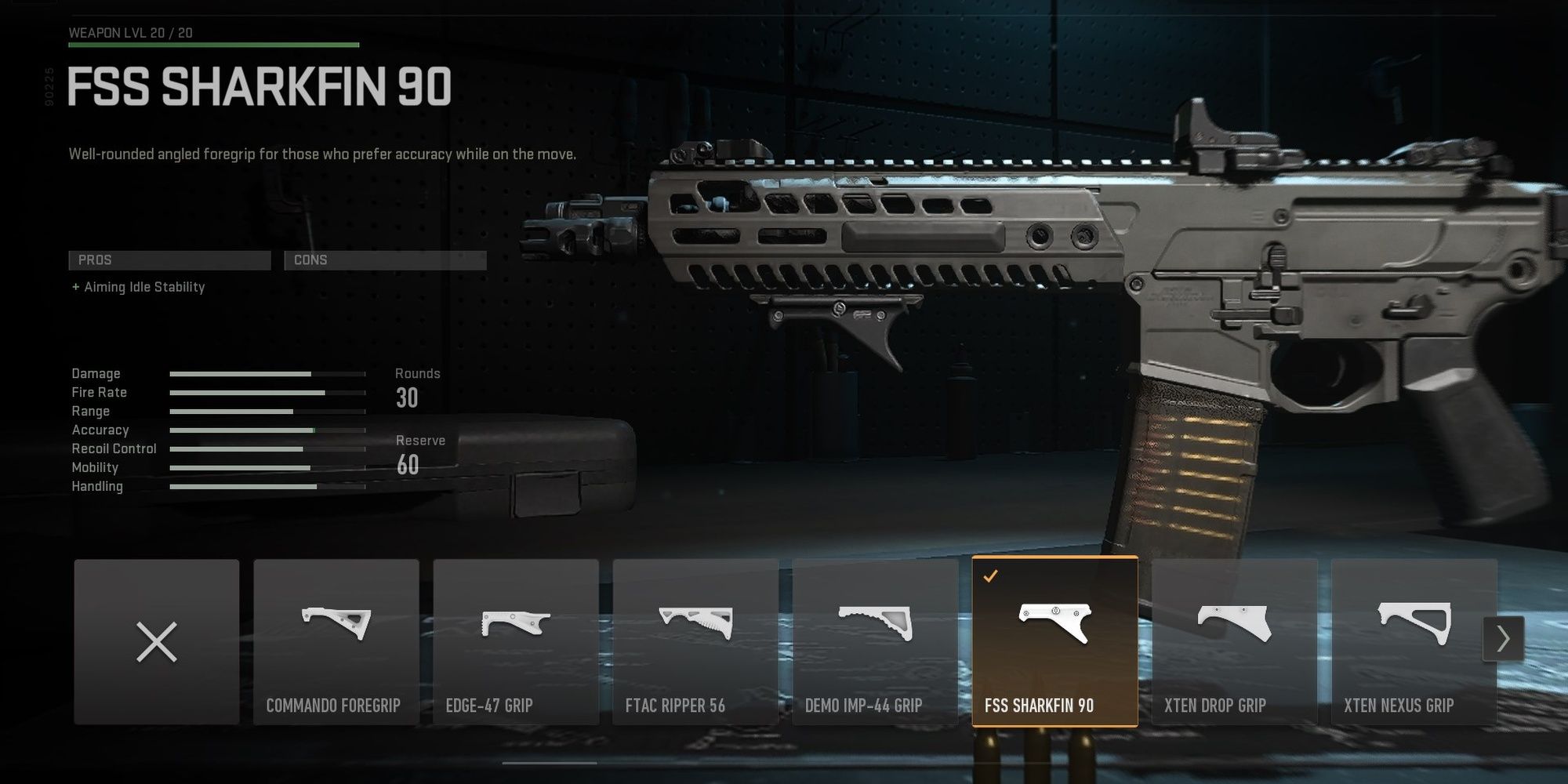 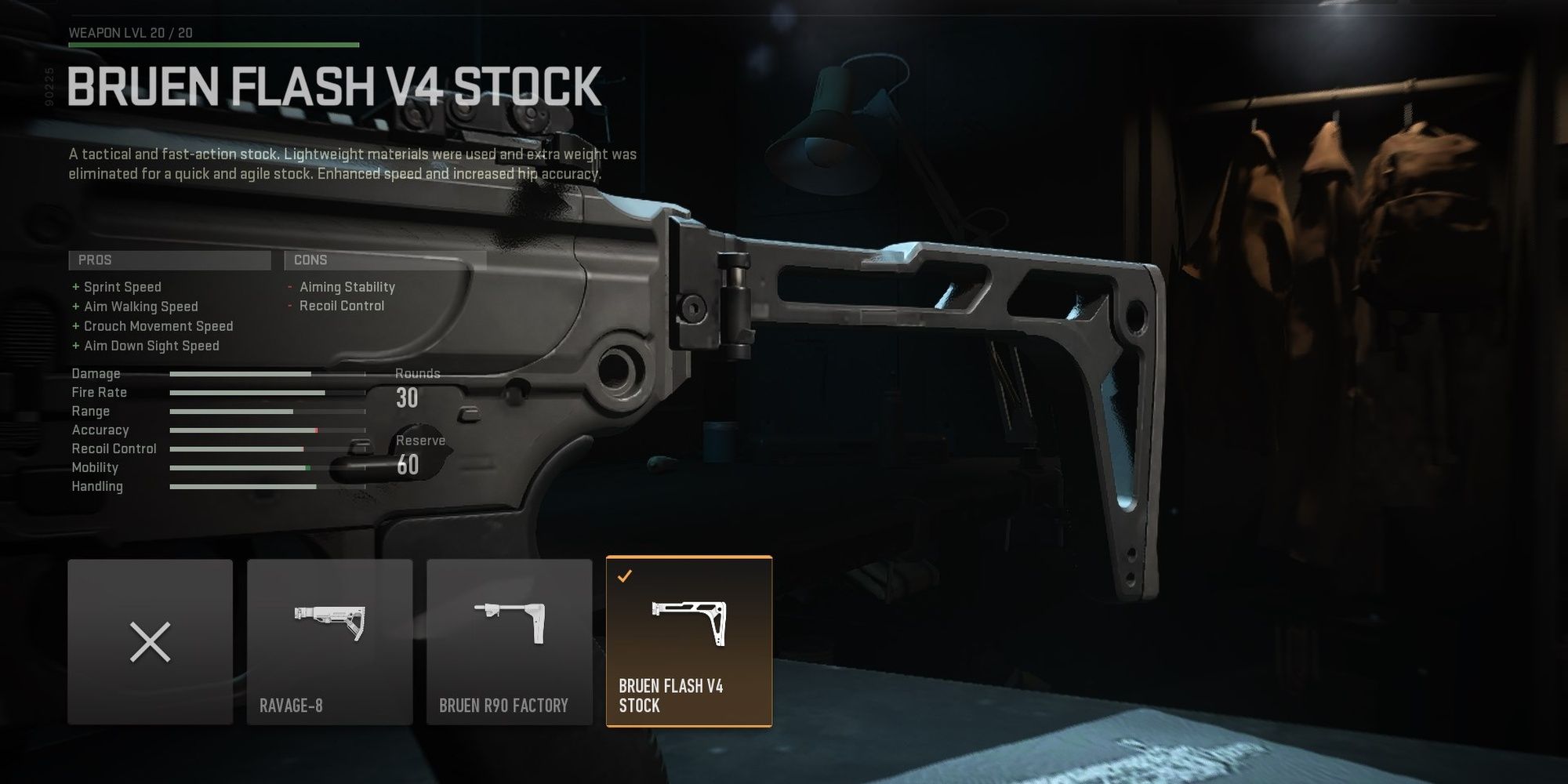 Everything is slightly improved with this M13B build, lowering its recoil while increasing your mobility. We improve the weapon's consistency with the Cronen Mini Pro sight for clearer optics, the VLK LZR 7MW for faster ADS times, the FTAC Castle Comp to lower the weapon's overall recoil, and the Bruen Flash V4 Stock for faster mobility. The fifth slot is up to you. We use the FSS Sharkfin 90 for extra aiming stability with no drawbacks.

Accuracy is your strong suit with this gun. It only takes three headshots to kill someone in multiplayer, and this build makes it quite easy to stay locked on a target's head. At longer ranges, we recommend aiming at chest level and letting the gun's recoil climb to their head, leading to easy kills. This gun struggles in close range, so bring a good backup weapon like a Basilisk or the Fennec—assuming your loadout uses Overkill.

Per usual, we'll be focusing on our neutral game with this loadout. You can't go wrong with Fast Hands as your bonus perk, allowing you to use equipment, swap weapons, and reload your guns much faster. Your ultimate perk should either be Ghost or Quick Fix, depending on how aggressive you are. Equipment will depend on game type, but you can't go wrong with Drill Charges and Stims. Aggressive players should use Dead Silence, while more passive players should use the Trophy System or DDoS. Pack a close-range weapon for your secondary to cover all your engagement ranges. 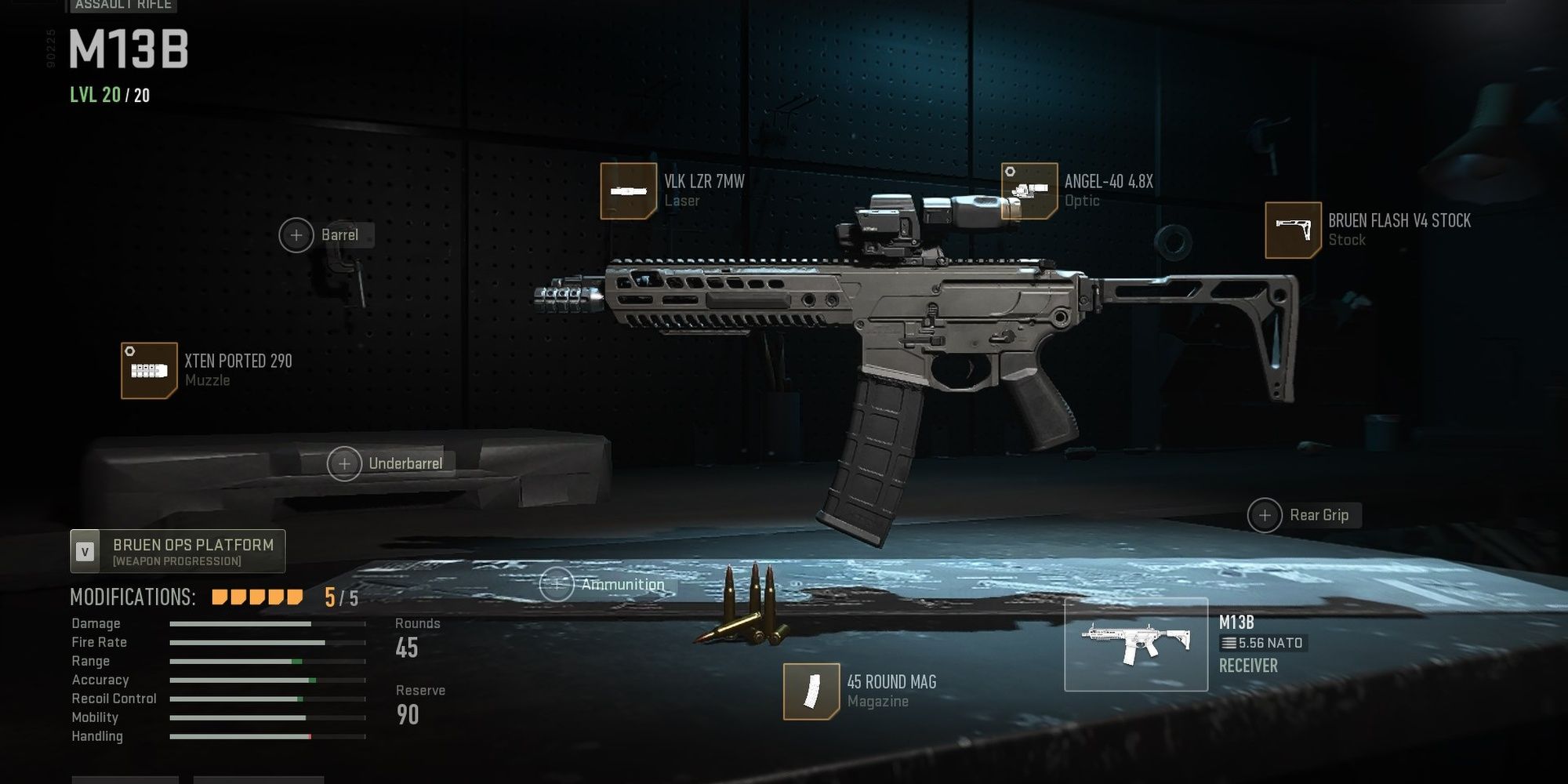 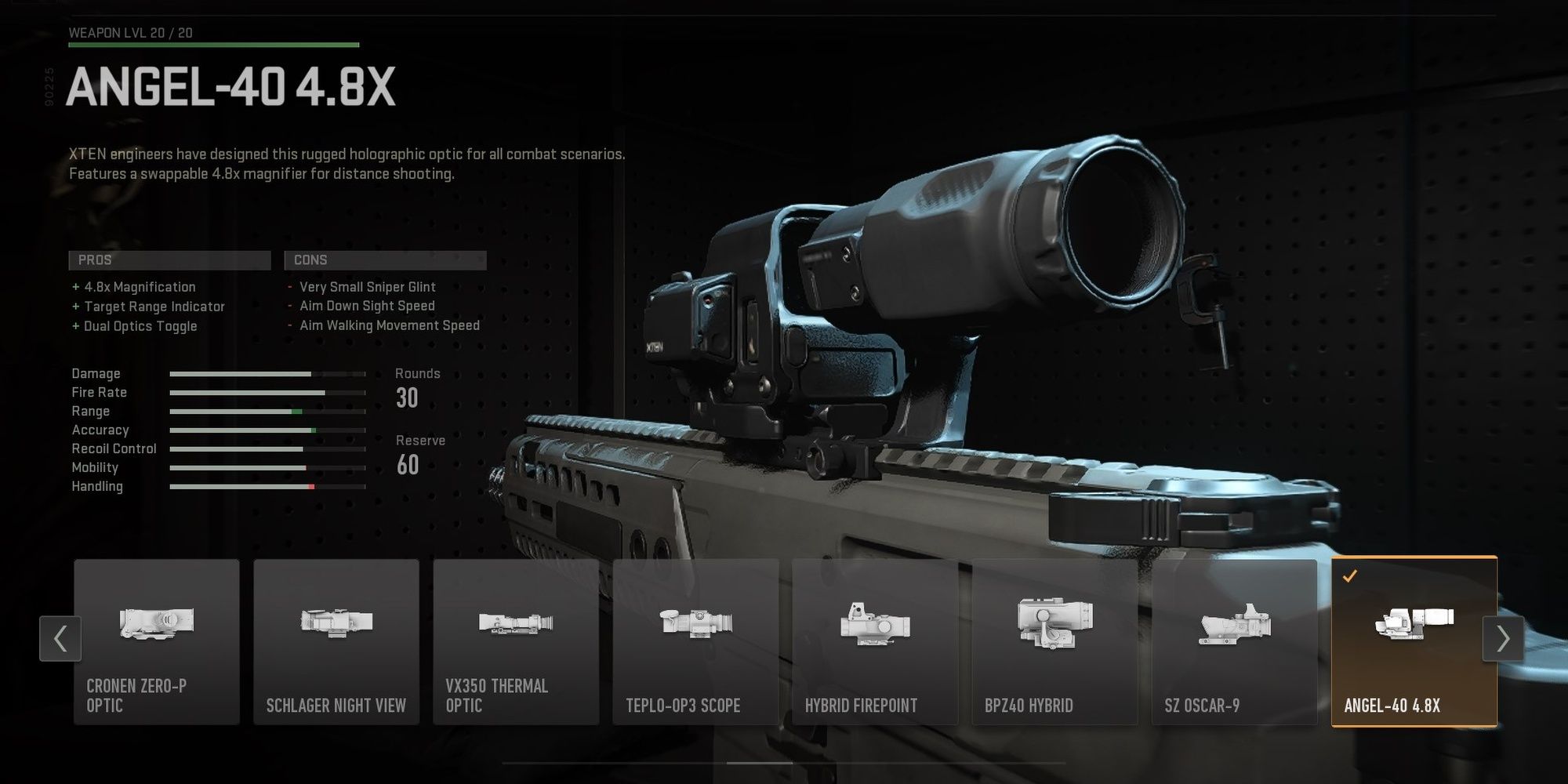 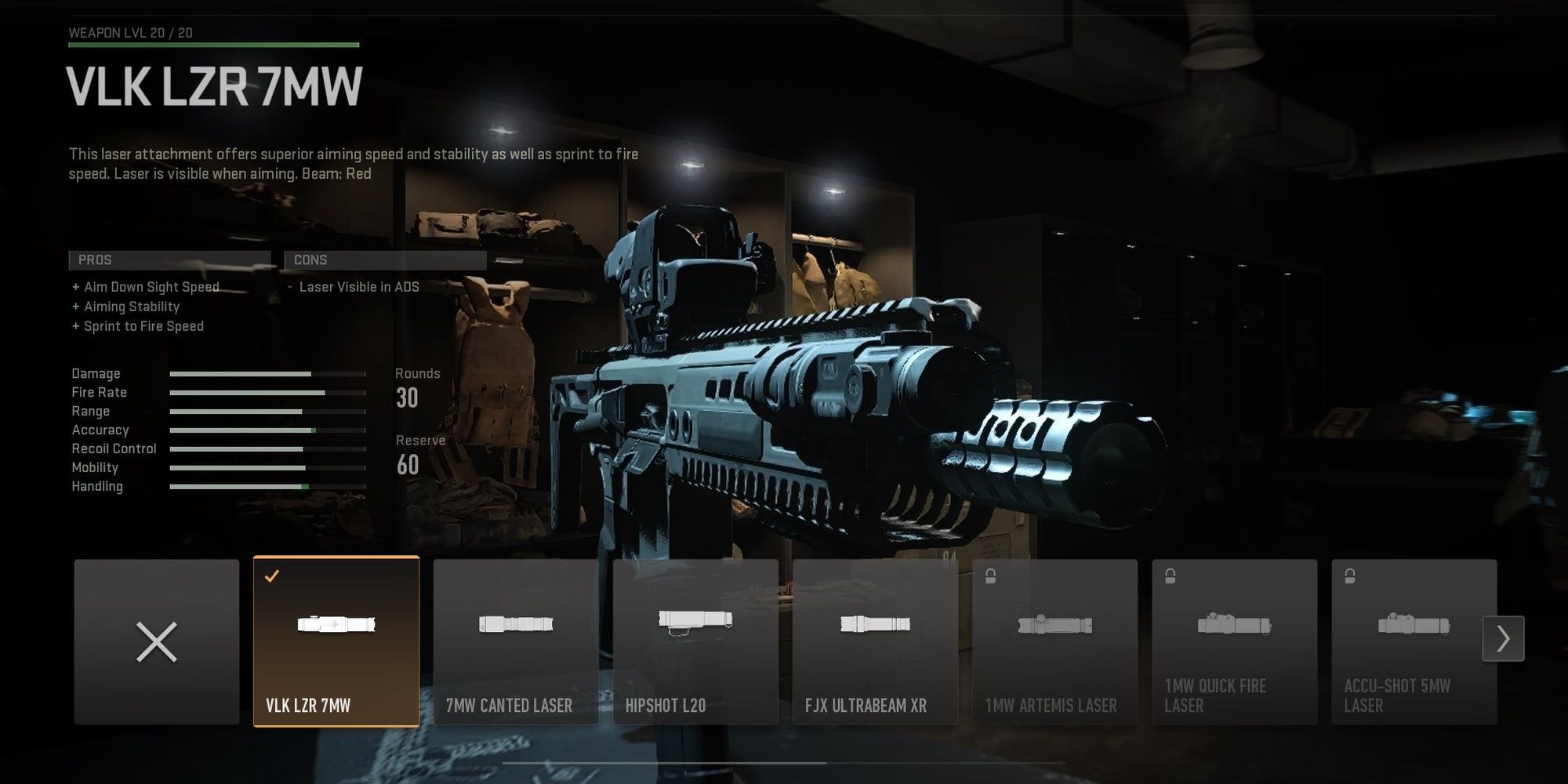 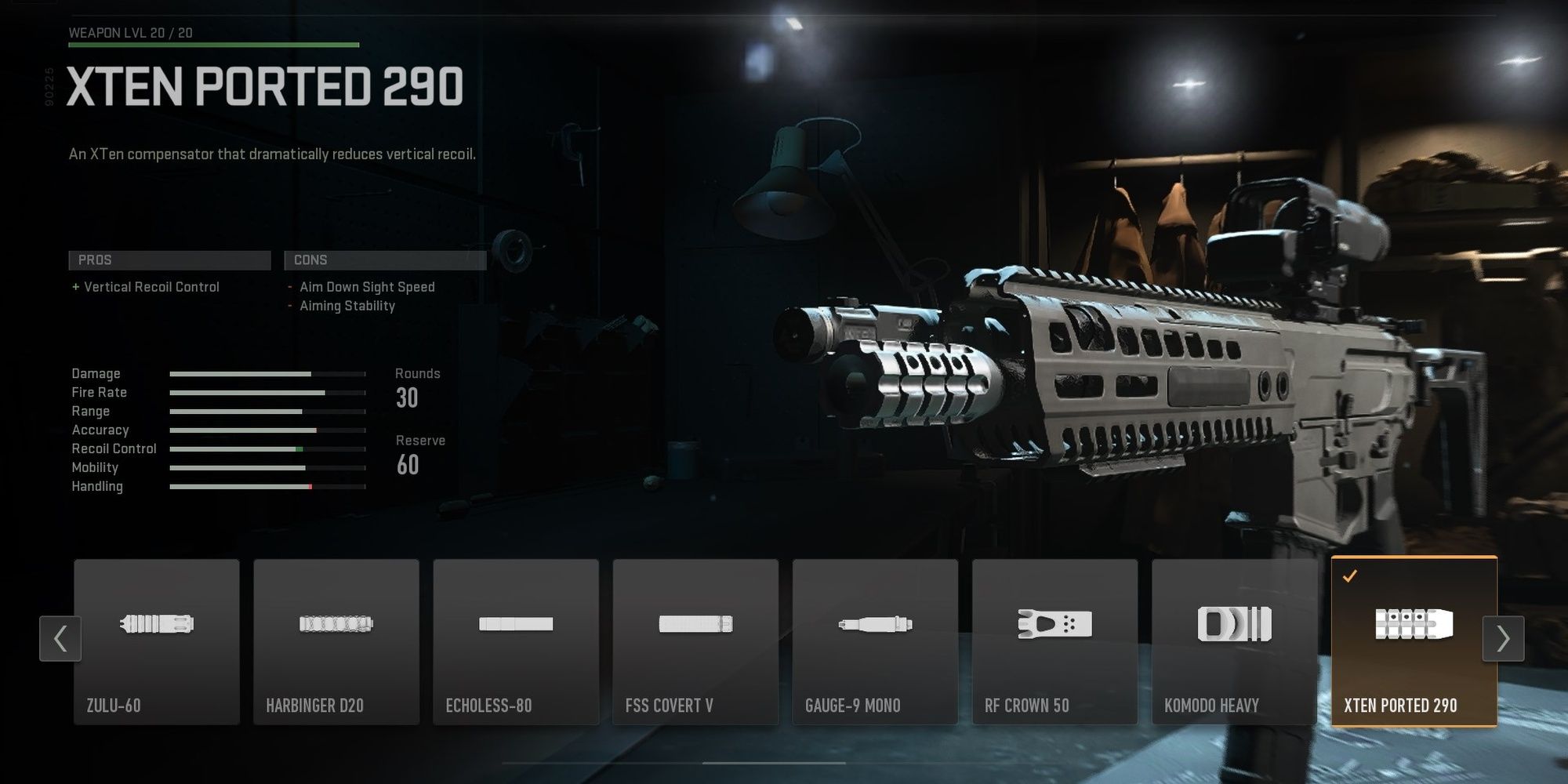 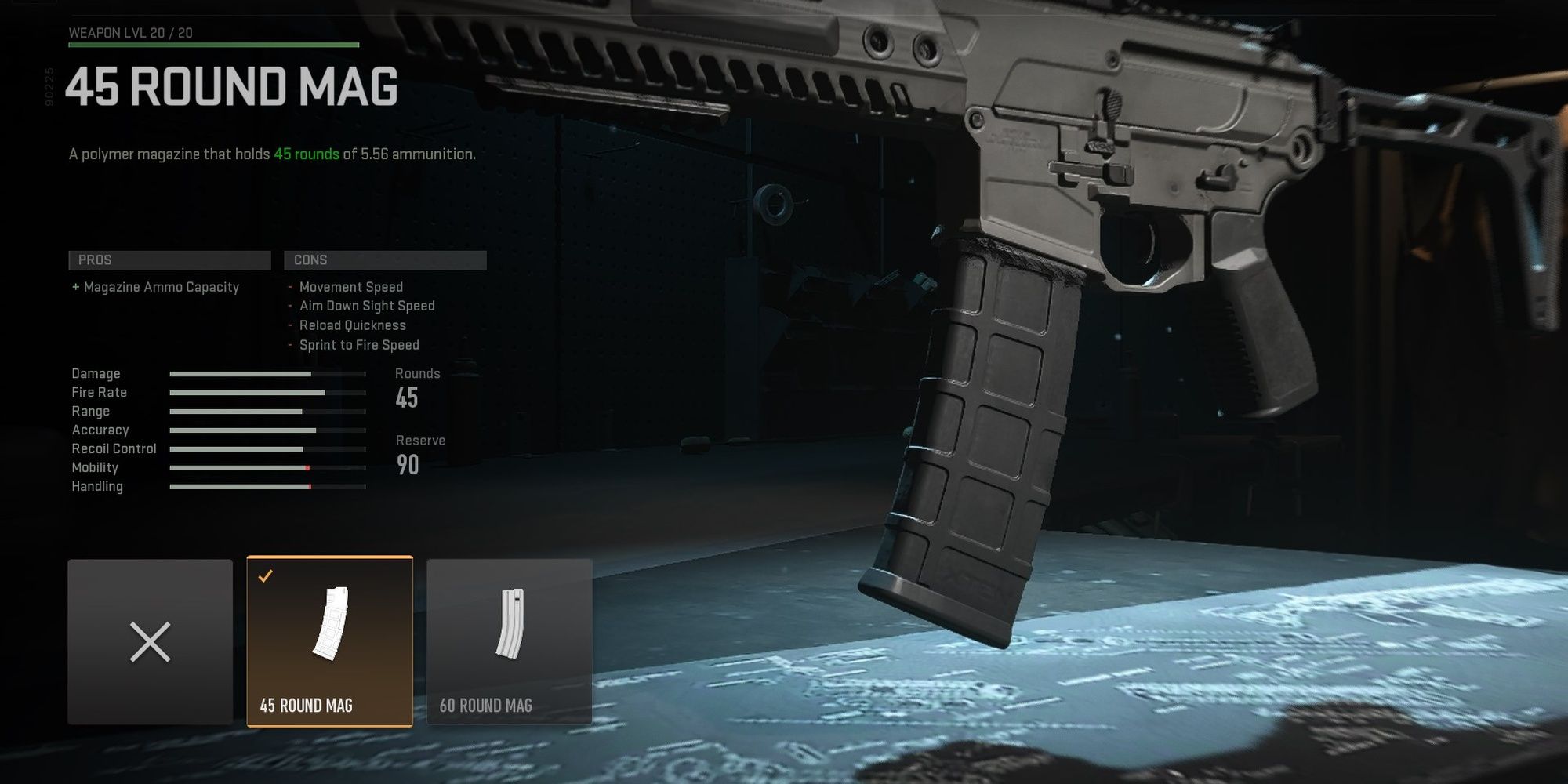 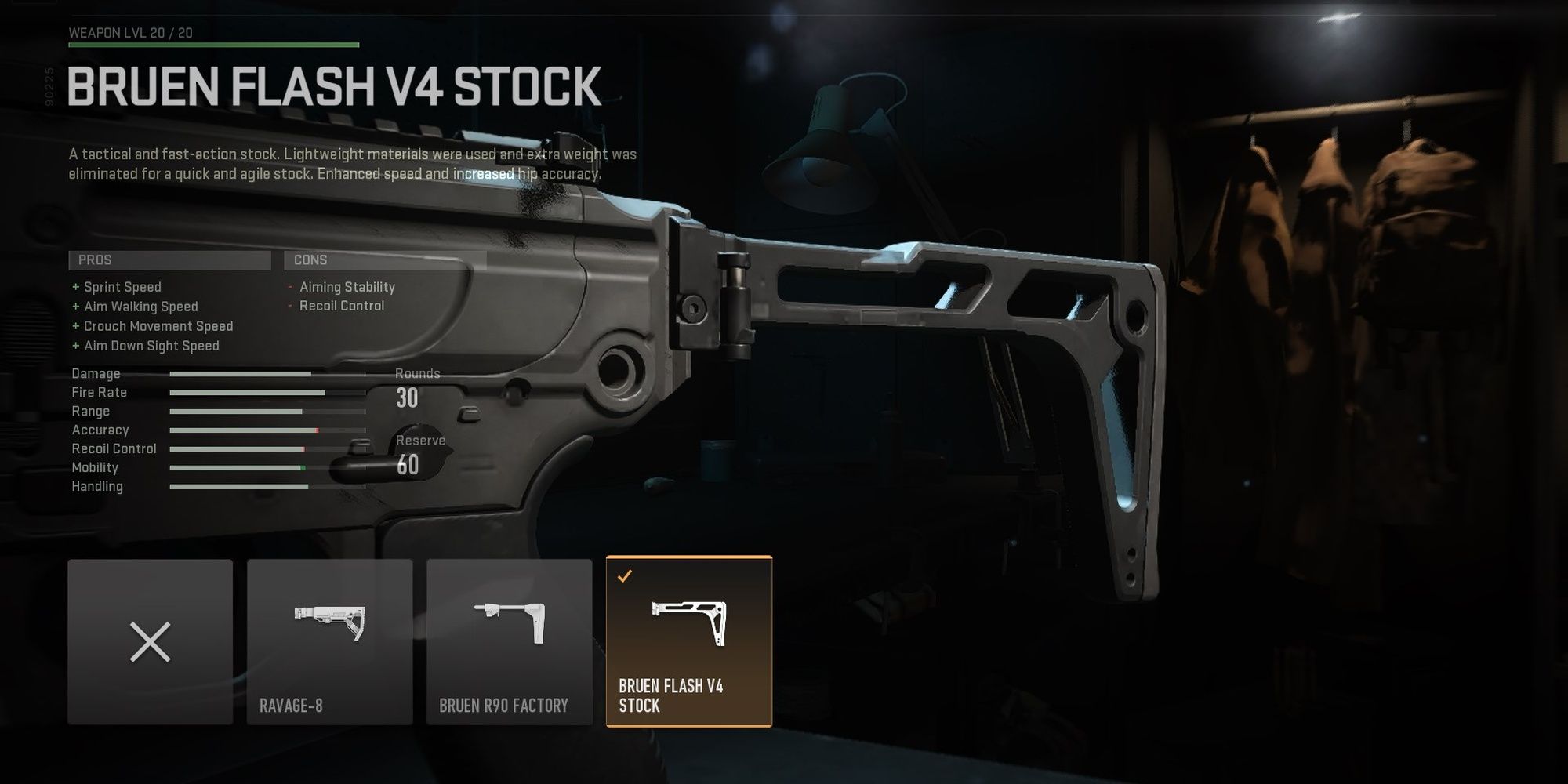 If you don't mind slower strafe speeds, replace the stock with 5.56 High Velocity Rounds. This makes leading your shots in modes like Warzone far easier.

This build focuses almost entirely on accuracy, making the M13B the most accurate assault rifle you can use. We do use the Bruen Flash V4 Stock to assist with overall strafe speeds, but the rest of our attachments focus on laying down accurate fire from long distances. To that end, we use the Angel-40 4.8x optic for close and mid-range zoom levels, the VLK LZR 7MW for improved aim idle stability, the XTEN Ported 290 muzzle to remove vertical recoil, and we round off the build with a 45 Round Mag. If you need more range for modes like DMZ, replace the laser with the 14'' Bruen Echelon barrel.

Don't let our attachment choices fool you. This weapon is absurdly accurate at all ranges, even longer ranges intended for marksman rifles. The muzzle handles most of the recoil control here, complementing our optic nicely. You're still quite mobile with this setup and have a solid magazine capacity, making this build perfect for Warzone and Ground War. In 6v6 multiplayer, you'll need to duel opponents at a distance to excel with the M13B, as most other ARs require fewer headshots or body shots to kill someone.

Use the same loadout as our previous build. We'll be using Fast Hands for rapid reloads, Ghost to hide from enemy UAVs, and a pistol with fastdraw to duel enemies in close quarters. The rest of your perks and equipment are down to preference and game type, so feel free to experiment. We recommend Trophy Systems for objective modes, Dead Silence or Battle Rage for solo play, and the Munitions Box if you're playing with a group.