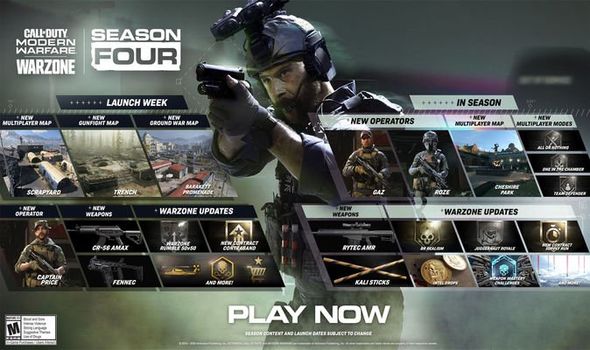 The Call of Duty Modern Warfare Season 4 update is now live and includes a few drawbacks for gamers. While there is a ton of new content to explore, some players have been unable to do so yet.

This is due to the slow download speeds and the large update size being encountered in MW and COD Warzone. For gamers on Xbox One, the Call of Duty Season 4 update weighs in at a whopping 84GB, making for a slow download.

Players were warned it was going to be a chunky download but most other platforms are seeing around 40GB in space. The latest news on the situation is that Activision is looking into the large Xbox One download size.

The message from Activision adds: “We’re actively investigating an issue for Modern Warfare where some players on Xbox are seeing a larger than expected download size for today’s update. Stay tuned for updates.”

The slow download speeds are to be expected, as there are probably millions of players globally trying to access the new content. But when you have completed the process, there is plenty to check out, with more coming over the coming weeks.

The official Call of Duty Modern Warfare Season 4 roadmap has been released and includes new modes, maps and weapons. There is also the new Season 4 Battle Pass, and in-game events now live in Call of Duty Warzone.

These function as a way to change up gameplay, and fans can expect them to randomly drop in during matches. Activision has warned that these will only occur during some matches, with A Jailbreak, Fire Sale, or Supply Chopper possible.

More details on the new changes can be found below, with Warzone mode also receiving Juggernaut Royale and Realism Mode in the coming weeks.

This season a trio of new maps arrive at Season Four launch, free for owners of the full version of Modern Warfare. Each new map is crafted for a distinct mode of play – Multiplayer, Ground War, and Gunfight.

Scrapyard, from Call of Duty: Modern Warfare 2, makes its debut this season, and the small, fun, and frenetic map is just as veterans remember. Watch your six in this resting place for abandoned airplane parts as close quarters combat and even snipers can find success here. Consider equipping your weapon of choice with FMJ to fire at targets through the strewn about airplane hulls and stay on the move as this map is bound to get busy.

Warzone players will be in familiar territory in Barakett Promenade, the latest Ground War map, available at Season Four launch. No need to worry about listening for the soft hum of chests but stay alert for the sounds of multiple enemies on the map. Take advantage of building rooftops to add some verticality into your playstyle or come ready for close quarters combat and do a clean sweep of the interiors. However, you choose to play, be prepared for the heavy arsenal that typically comes with a Ground War battle.

As the name suggests, this Gunfight map is a network of interconnected trenches. Although players can exit the trench to move quicker throughout the map, you’ll expose your position to the enemy, so consider your options. Fast reflexes will serve you well with any weapon and be wary of the glint should you face off with marksman or sniper rifles.

Expand your squad in an intensive large team battle in Warzone Rumble. Battle in Verdansk in a 50v50 Team Deathmatch face-off. Gear up for the fight by finding weapons on the ground and work with your team to outlast the competition.

Players will discover a change in weapons as new blueprints make their way to Warzone in varying frequency, allowing you to switch up your approach to battle. Learn the strengths of these weapons to be at your best in Verdansk and consider gravitating toward loadouts that fit your playstyle while you get a better feel of the latest blueprints.

In Juggernaut Royale, a Battle Royale mode variant, the massive Multiplayer Killstreak drops into Verdansk – three airdropped care packages, specifically, hold the Juggernaut suit. Head to one of the marked locations to capture and don the Juggernaut suit. Once you have it on, you’ll have higher health, a mini-gun, and a sweet music track to accompany you during the Warzone match. You’ll still be able to ride in vehicles and climb ladders, and your zero-fall damage will be accompanied by a ground pound of damage that impacts anyone in the immediate area. If any of the Juggernauts are sent to the Gulag, after a brief delay period, a new Juggernaut care package will be marked on the Tac-Map and deploy into Verdansk.

Realism in Warzone follows the same rules as the Multiplayer mode. You’ll have a minimal HUD and deal increased headshot damage. Make sure you make the most of it, but fire with precision.

Events can occur during Warzone Battle Royale matches and have an impact on the strategy and approach to gameplay. Events can happen in any given match without advance notice. When they happen events will always occur mid-game. E.g. after the first drop kit and before the Gulag closes. Only one event type will occur in a given match, so familiarize yourself with three new event types, available at the start of Season Four – ‘Jailbreak’, ‘Fire Sale’, and ‘Supply Chopper’.

When a ‘Jailbreak’ occurs, all players that have been eliminated will be released back into the match. Whether you were waiting for your 1v1 in the Gulag, or had been relegated to a spectator, now you’ll have another chance. You will get a one-minute notice before a Jailbreak event happens to find additional armor or secure a weapon for your returning teammates. Jailbreak events can occur any time during the middle game of a Battle Royale match, so it may be worth it to spectate, just in case. Be mindful that when a Jailbreak occurs, it’s not just your teammates that are coming back, but tons of additional enemies.

A ‘Fire Sale’ is an in-game event that temporarily discounts most of the items at a Buy Station up to 80% or even gives items out completely free. A Fire Sale is the perfect time to pick up a UAV, Armor Box for your squad, or even a lethal Killstreak. During a Fire Sale buying back a fallen teammate is completely free. If your short on in-match Cash, a Fire Sale might be the best chance to redeploy a squadmate. Note that even during a Fire Sale, Loadout Drops are not discounted. Fire Sales only last sixty seconds, so expect Buy Stations to be crowded and prepare for a fight.

A ‘Supply Choppers’ event brings a non-lethal, but heavily armored helicopter to Verdansk. The helicopter will have a lot of health, and it will require a few rounds of bullets and maybe a rocket or two to bring it down. The helicopter will not shoot at you, but make sure that while you’re distracted enemy teams don’t take advantage. Once you destroy the Supply Chopper, it will drop high quality loot for players to pick up. This loot includes three UAVS, two armor boxes and munitions boxes, a gas mask, a grenade launcher, and tons of Cash at a minimum. Supply Choppers leave after a certain period of time, so if you want to take one out start firing right away. Remember, that after taking down a Supply Chopper, you have to collect the loot. Watch out for enemy teams who might try to take you out during the collection or steal your hard-earned rewards.

Which edition of Ghost of Tsushima should you buy?

EA Sports UFC 4: Why EA Removed Ultimate Team This Year
We and our partners use cookies on this site to improve our service, perform analytics, personalize advertising, measure advertising performance, and remember website preferences.Ok