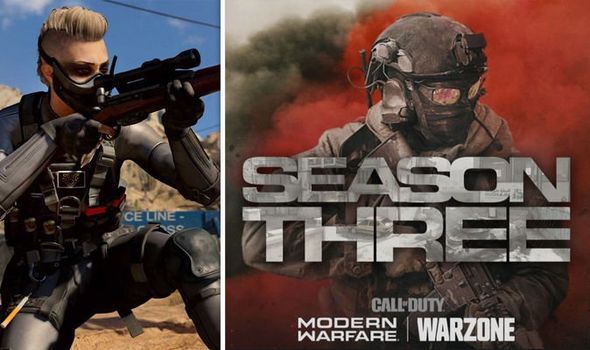 Call of Duty fans are counting down to the start of Season 3 in Warzone and Black Ops Cold War.

The new season has an April 22 release date on PS5, PS4, Xbox Series X/S, Xbox One and PC.

However, before the start of the new season, Call of Duty fans can take part in a series of in-game events within Warzone.

Based on teasers tweeted by Activision, the rumoured Warzone Nuke event kicks off at 8pm BST on April 21.

The first part of the event runs until 10pm BST UK time, while the second part begins immediately after from 10pm BST until 5am BST on the morning of April 22.

The third stage of Nuke event runs from 5am BST on April 22 until 8pm BST on the same day. A fourth and final event lasts for just one hour from 8pm until 9pm BST.

This means that Call of Duty Season 3 begins in full at 9pm BST on April 22 for fans living in the UK.

To ensure you don’t miss a second of the action, you can pre-download the Black Ops Cold War and Warzone update ahead of the beginning of the new season.

It’s worth updating the game as early as possible, because the huge Season 3 patch introduces a ton of new content.

Most notable of which are the major map changes coming to Call of Duty Warzone’s Verdansk location.

Season 3 also introduces a new Warzone event, which tasks players with completing challenges in order to hunt down Adler.

“Starting with the launch of Season Three, the new ‘Hunt for Adler’ limited-time event will task Operators with unique in-game challenges in both Black Ops Cold War and Warzone to learn of Adler’s whereabouts.

“You can find more details about this event in the Seasonal Event tab on the main menu between Play and Weapons once Season Three kicks off in Warzone. Once you’ve completed a full set of challenges in either Black Ops Cold War or Warzone over the course of the event, you’ll unlock an exclusive Adler skin for use in both games!”

As for Call of Duty Black Ops Cold War, fans can expect the usual mixture of new maps, operators, weapons and lots more.

New multiplayer maps include Yamantau and Diesel on day one, followed by Standoff and Duga later in the season.

Multiplayer modes, meanwhile, include Sticks and Stones at launch, as well as Multi-Team Elimination further down the line.

Anybody who picks up the Battle Pass will be granted immediate access to new operator Wraith. You’ll unlock a special Wraith skin at level 100.

“This ex-Norwegian Intelligence Services alpine warfare specialist-turned-Perseus-agent makes a grand entrance demonstrating her skills in infiltration and sabotage. A vital asset in winter operations, cold-blooded and intolerant of weakness, she’s the perfect antagonist to fight against the NATO forces.” 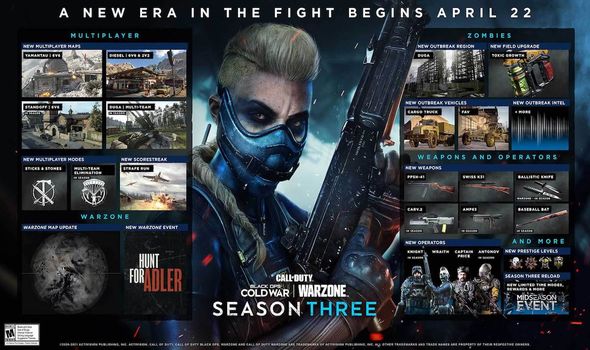 Even more exciting is that Captain Price from the Modern Warfare games will make an appearance as part of Season 3.

Captain Price is free to anybody who owns or buys a copy of Call of Duty Black Ops Cold War.

New weapons available during launch week include the PPSh-41 SMG, the Ballistic Knife and the Swiss K31 Sniper Rifle. Additional weapons will be available later in the season.