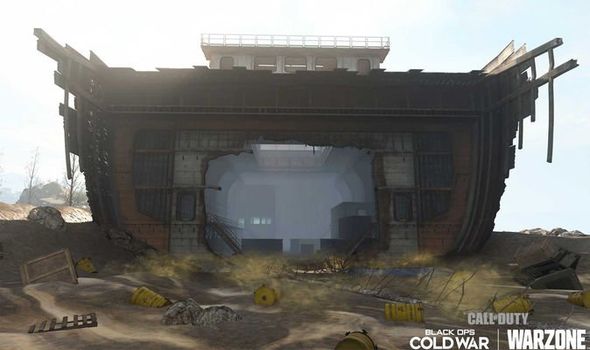 This week’s Call of Duty Warzone update comes complete with the starting effect of the upcoming Nuke Event, a new weapon, and a new playlist.

The big news is that areas of Verdansk are now radioactive, meaning that gamers heading into these areas will take damage and can even turn into zombies.

So far, the Radiation Zones are limited to a few spots, with the Shipwreck and Prison proving to be the biggest areas affected.

But more are expected to be added to the list, including those locations that have been infested with zombies, including Downtown, Superstore and the Dam.

Gamers are also reporting that if you’re playing in a group, and one of your teammates dies in the Radiation Zones, they will turn into a Zombie.

When reaching the edge of one of these new zones, players will see fallout hanging in the air.

And having entered the area, the screen will turn green and you will start taking a small dose of damage every few seconds.

It’s not quite as bad as the gas but there is no way of protecting against these effects, unlike with a Gas Mask.

When entering a game, the areas of Shipwreck and the Prison will look normal, until a small red circle starts to expand, showing the fallout areas.

This is a huge change in gameplay from the normal run of pace in Verdansk but it’s unclear how it will affect things before the start of Season 3.

Today has also seen the release of a new playlist, which can be found below and includes the following modes:

Today’s Warzone update, surprisingly, doesn’t require a patch, meaning that these changes have been added as part of past Warzone updates.

So what about the other changes made in Call of Duty Warzone this week? Well, developers Raven Software have decided to release a new weapon, just before Season 3.

The Sykov Pistol is now available in-game but requires players to unlock it for it to be used within a loadout in Warzone.

The Sykov is a full-auto Pistol that is described as a double-action – single-action sidearm and comes with an easy unlock Challenge.

Early reports indicate that the Sykov Pistol can be unlocked after getting four kills using pistols in five different matches.

The only issue that after unlocking the new weapon, players have been unable to use it properly.

And those who are able to wield it say they can’t level it, which suggests that the Skyov Pistol has been added to the game early.

It should be noted that to complete the challenge, you will need to finish the game your playing as leaving early will not count towards the challenge score.

If the new pistols have been added early, gamers can expect them to be removed until Call of Duty Warzone Season 3 begins in a few days.

WHEN IS THE CALL OF DUTY WARZONE NUKE EVENT?

According to a series of new teasers released this week by Activision, the Call of Duty Warzone Nuke Event will be happening on Wednesday, April 21, 2021.

This would fit into the latest reports that Cold War Season 3 is scheduled to begin on April 22, providing enough time for a big show to be put on by Activision.

There were rumours that a limited-time mode would also be featured, focusing on Zombies taking over Verdansk.

However, since this information was first leaked, no such event has been announced by the development team.

And being so close to the end of Season 2, we would’ve expected something to have happened by now unless it’s part of some kind of new live event.

When it comes to timing, the Call of Duty Warzone Nuke event is expected to kick off at around 8pm BST, on April 21.