Check Out An Exclusive Preview Card From The Elder Scrolls: Legends – Alliance War

The upcoming The Elder Scrolls: Legends – Alliance War expansion set hits later this month, but we have a cool new card to share with you right now! The Steel-Eyed Visionary showcases the veteran ability, which triggers once the creature survives its first attack. Take a look! 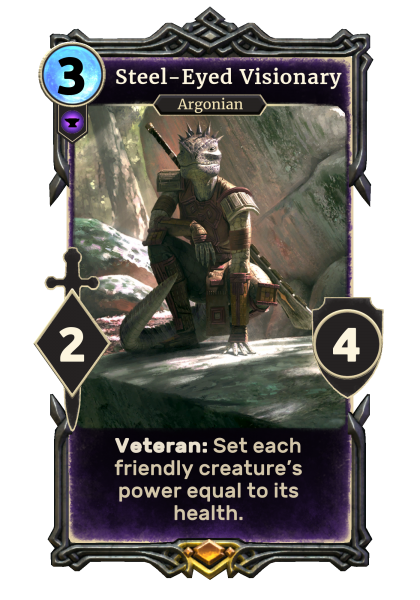 As you can see, when you decide to make that swing with Steel-Eyed Visionary makes a big difference, since you’ll only be able to trigger the ability once. Is it worth it to just swing early alone and turn into a 4/4? Or perhaps wait for larger friends for massive buffing potential?

Community manager on The Elder Scrolls: Legends, Christian Van Hoose, had this to say about the new card: “Steel-Eyed Visionary only costs three magicka, so it’s able to get played to the board very quickly and attack the following turn. When it does, its Veteran effect will increase its stats to 4/4 since it has four health – but the fun doesn’t stop there. If you’re able to play other creatures with high health, Steel-Eyed Visionary can generate a lot of extra power quickly. It can make Hive Defender a 6/6, or turn Portcullis into a 9/9! It also combos nicely with items that increase creatures’ health, such as Enchanted Plate.”