There have been plenty of unique platformers in the indie space over the years, but it's hard to top the weirdness that is Clustertruck. From the people over at Landfall Games, this game is all about jumping across moving trucks to get to the end of a level.

While Clustertruck seems ridiculous on its surface, it actually has quite a bit of depth. This is especially true with the abilities that the game offers the player. These can be purchased using Style Points, a currency earned after completing each of the levels in the campaign. There are only so many, but a few of them stand out from the rest. 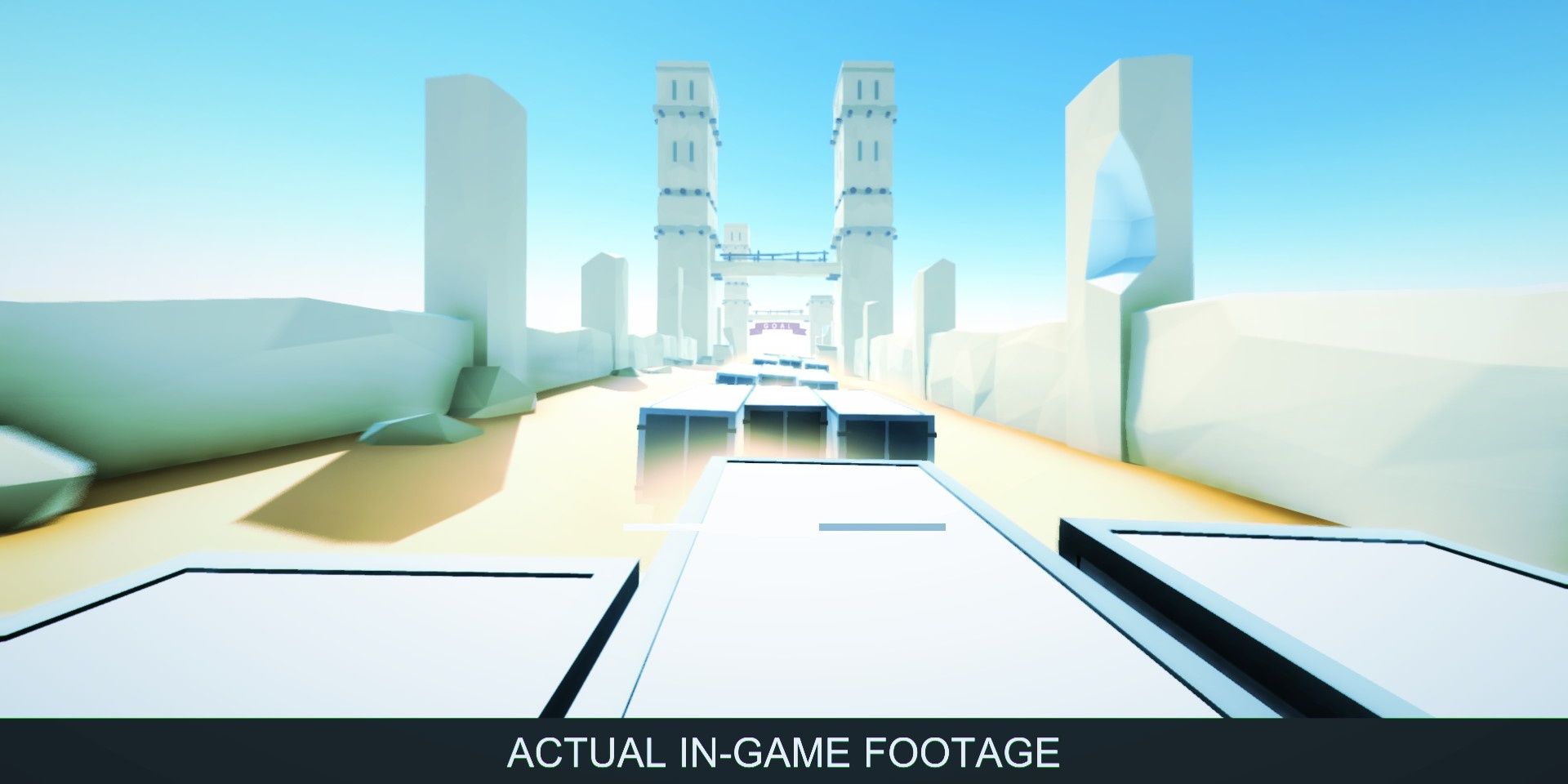 This first ability may seem like it doesn't do a lot. In fact, it comes across as a bit of a gag. While its one of the more expensive abilities to obtain, it doesn't do anything to help the player get to the end of the level, and it's the gameplay equivalent of having no ability at all.

However, when it is activated, an intense drum beat can be heard in the background and the screen turns incredibly cinematic with the words "Actual In-Game Footage" on the bottom. By using this ability in levels, it actually increases the amount of Style Points that can be earned at the end of the level. This can be very beneficial when you want to rack up the points. 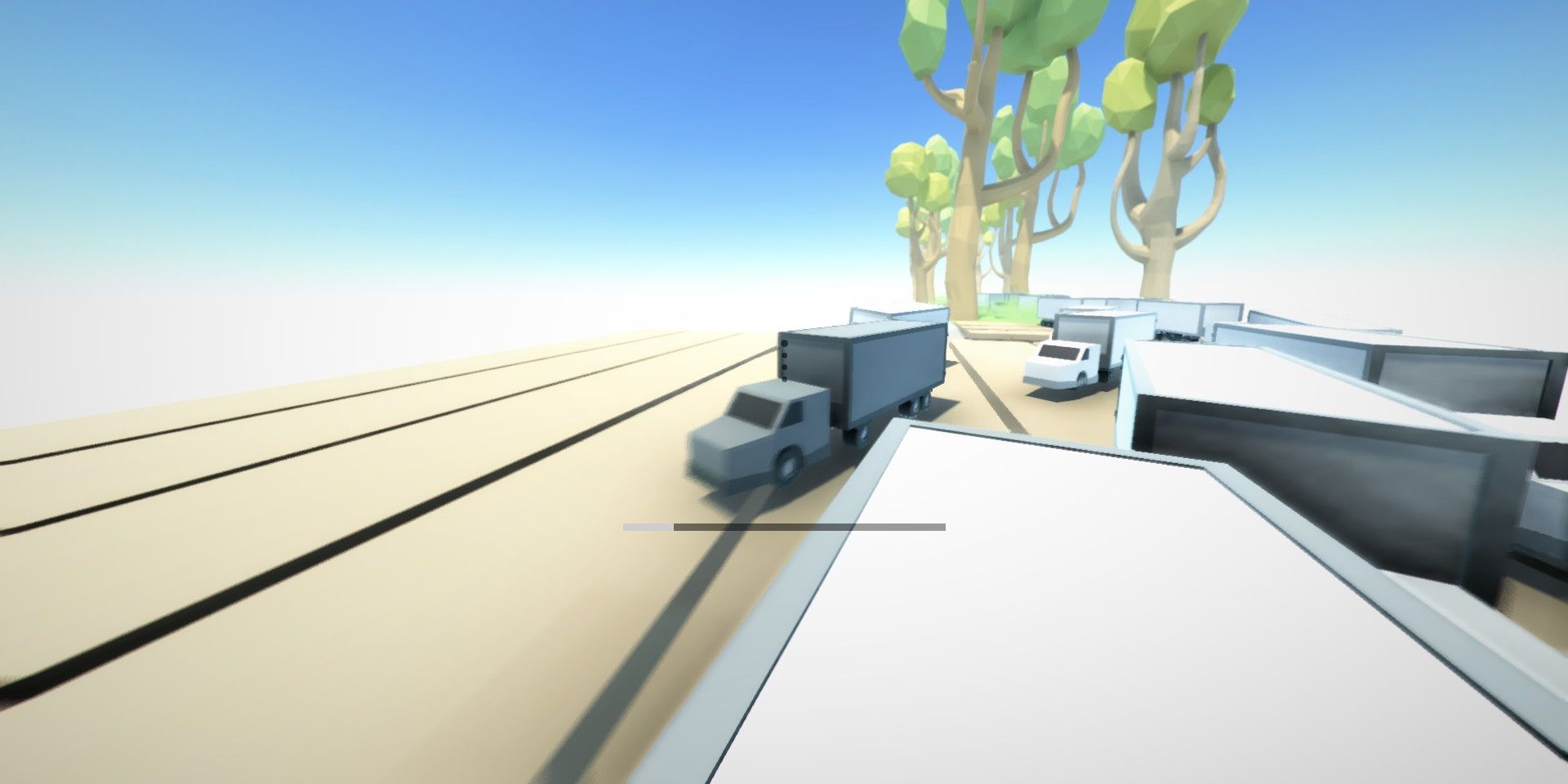 As you get further into the game, there will be wider gaps between trucks, making it a bit difficult to land longer jumps without falling short. Luckily, there is an ability that allows players to create a platform of their own.

With the Portable Truck power, players will be able to aim and spawn a gray truck at the exact spot they want to place it. The truck does move, albeit at a very slow speed. This should help you by creating a convenient landing spot in the place of your choosing. 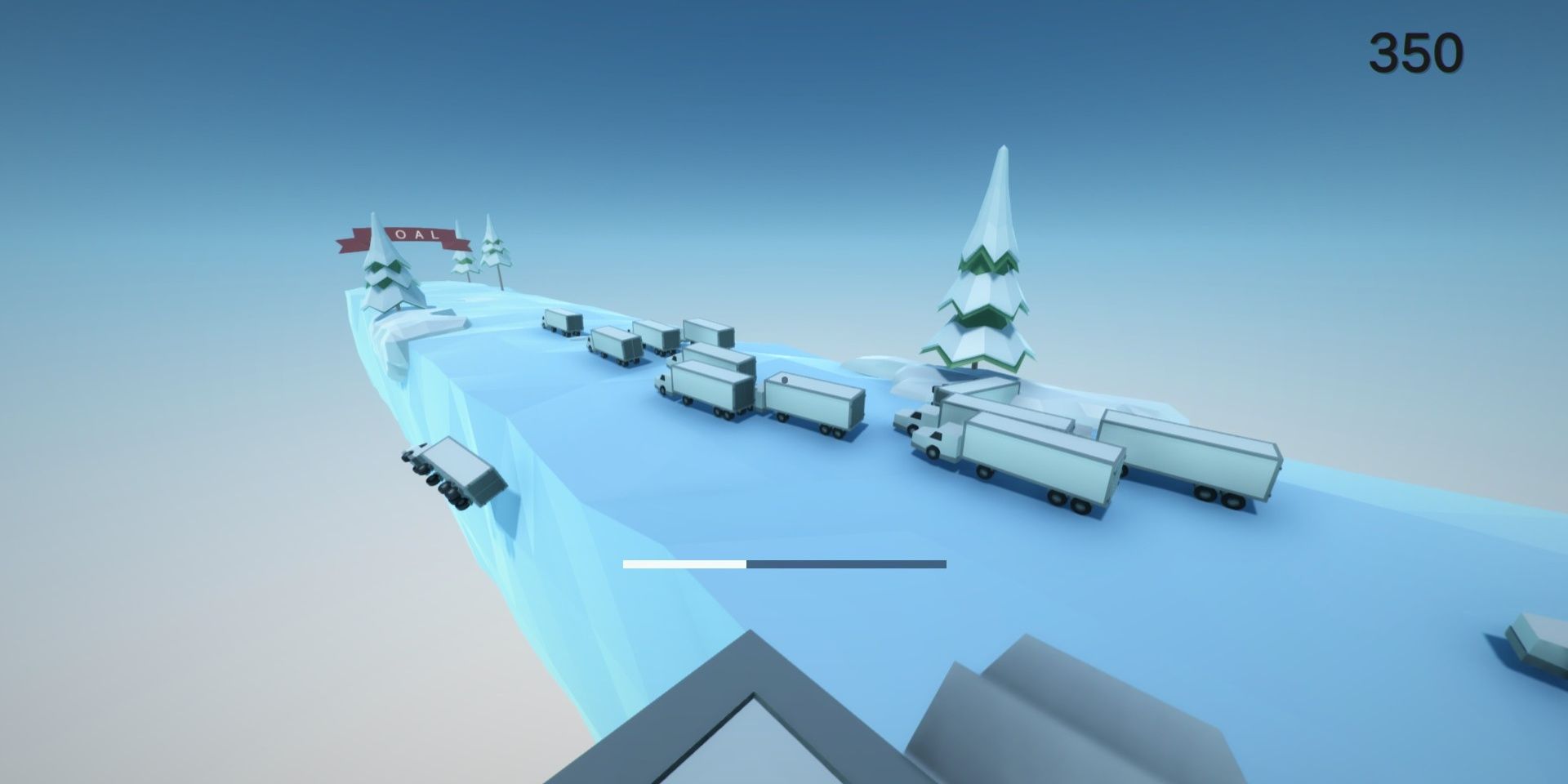 It's wild to watch these trucks moving at incredible speeds as they go through routes littered with obstacles. With this in mind, it is understandable if players want the trucks to just stop for a moment to make it easier to jump onto them.

This is the exact purpose of the Trucksolute Zero ability. It allows players to temporarily freeze trucks in place while they move freely in their pursuit of the goal. Keep in mind that this ability works for a very short time, but it can be used multiple times per level if. 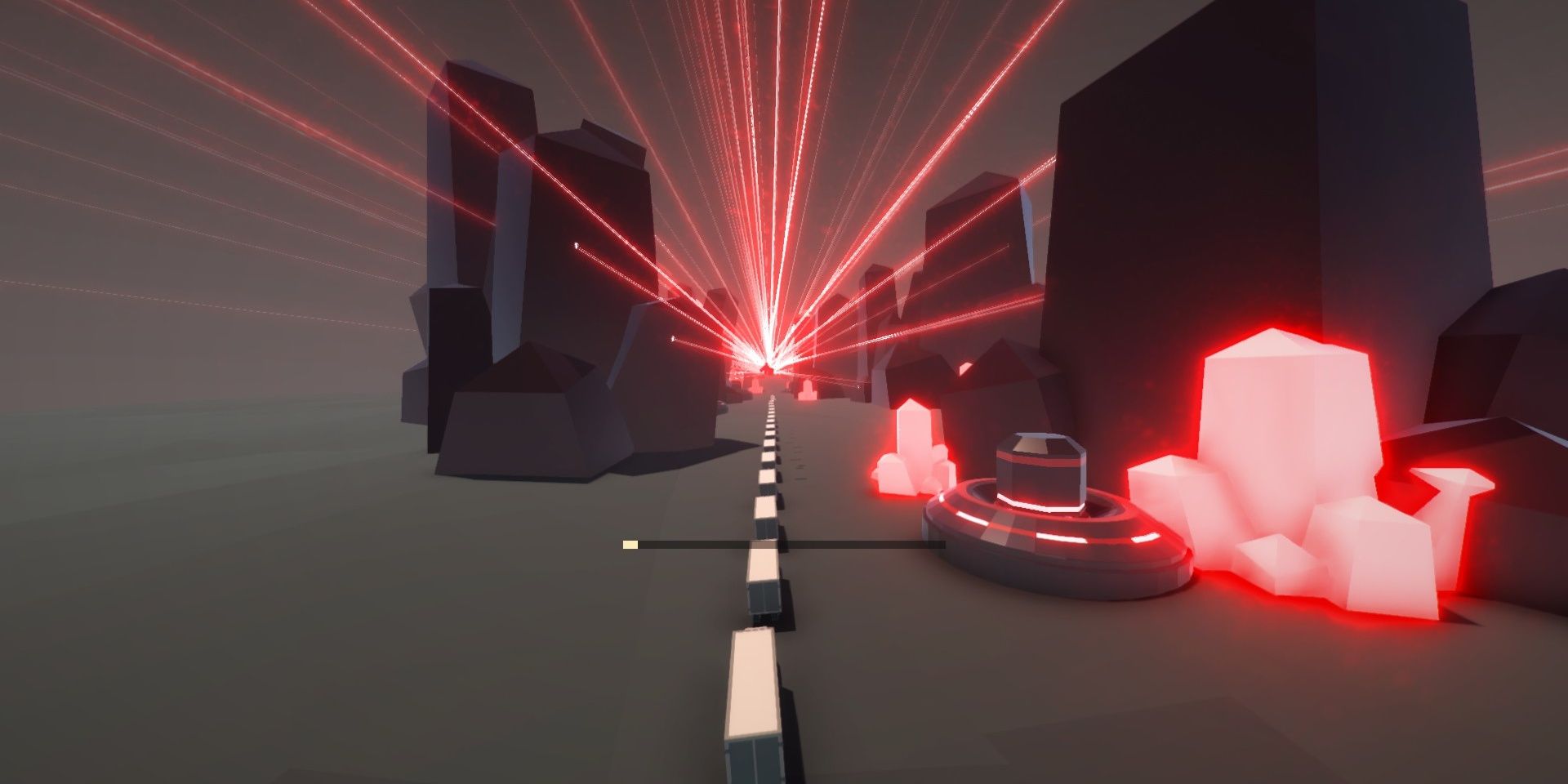 Since this is a platformer, there are plenty of movement related abilities in the game that allow you to get extra height. One of these powers is the Jetpack. It works just like a normal jetpack would, with the exception that it only works for a couple of seconds.

Activating the ability while jumping makes you blast upwards and gain more airtime. This allows you to more accurately find a landing spot below. It can also help in getting over a huge gap that may not have been as easy without the ability. 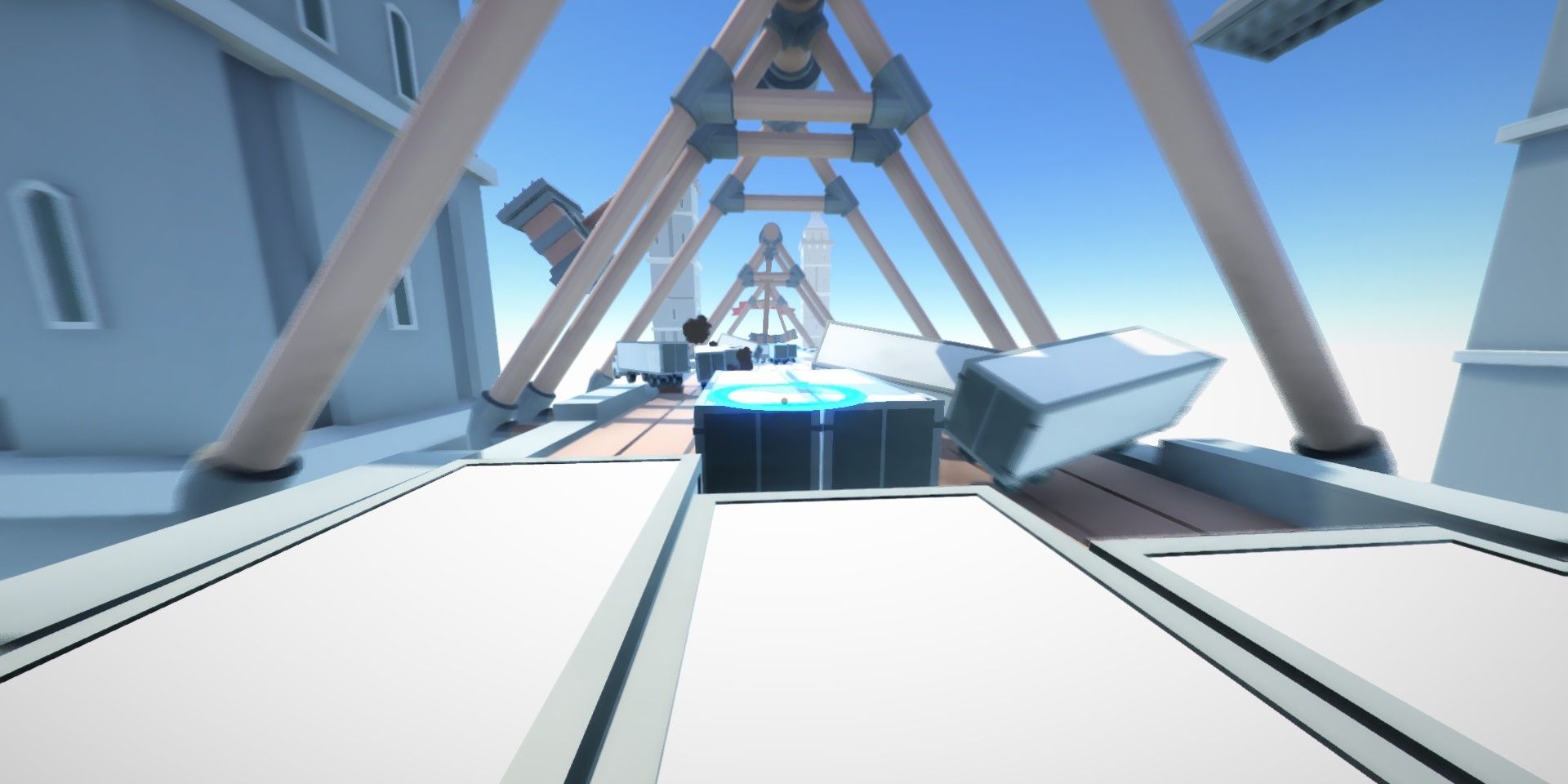 Clustertruck is all about getting from point A to point B as quickly as possible. Sometimes, simply jumping from truck to truck won't be enough to rise up the leaderboards. That is why using abilities can lead to some wild times. That's what's nice about Disrespected Blink.

It is essentially a teleport ability. When you're within range, you can zap right onto the selected spot in the blink of an eye. Keep in mind that if the platform is far away, you'll see a red circle when holding down the prompt, and it will not work. 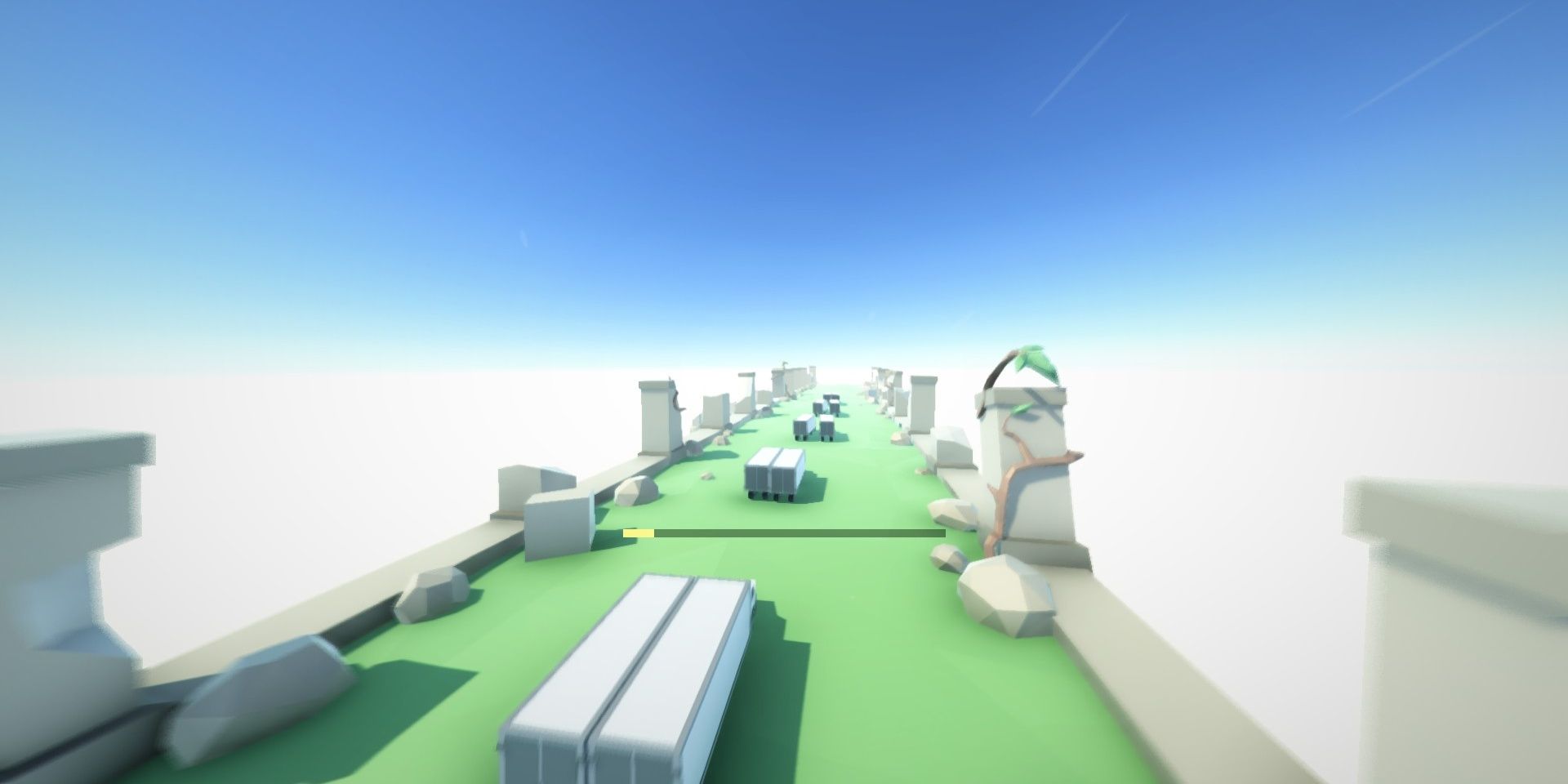 Speaking of movement, there's nothing that feels better in a platformer than a good dash. That burst of speed to help reach a specific point just feels satisfying, even if it falls short of the place you want to go.

After using it once, there is a small cooldown that needs to end before you can use it again. Since there is a cooldown, it's important to only use the ability when needed. That said, it is highly effective for reaching trucks that are a bit too far. 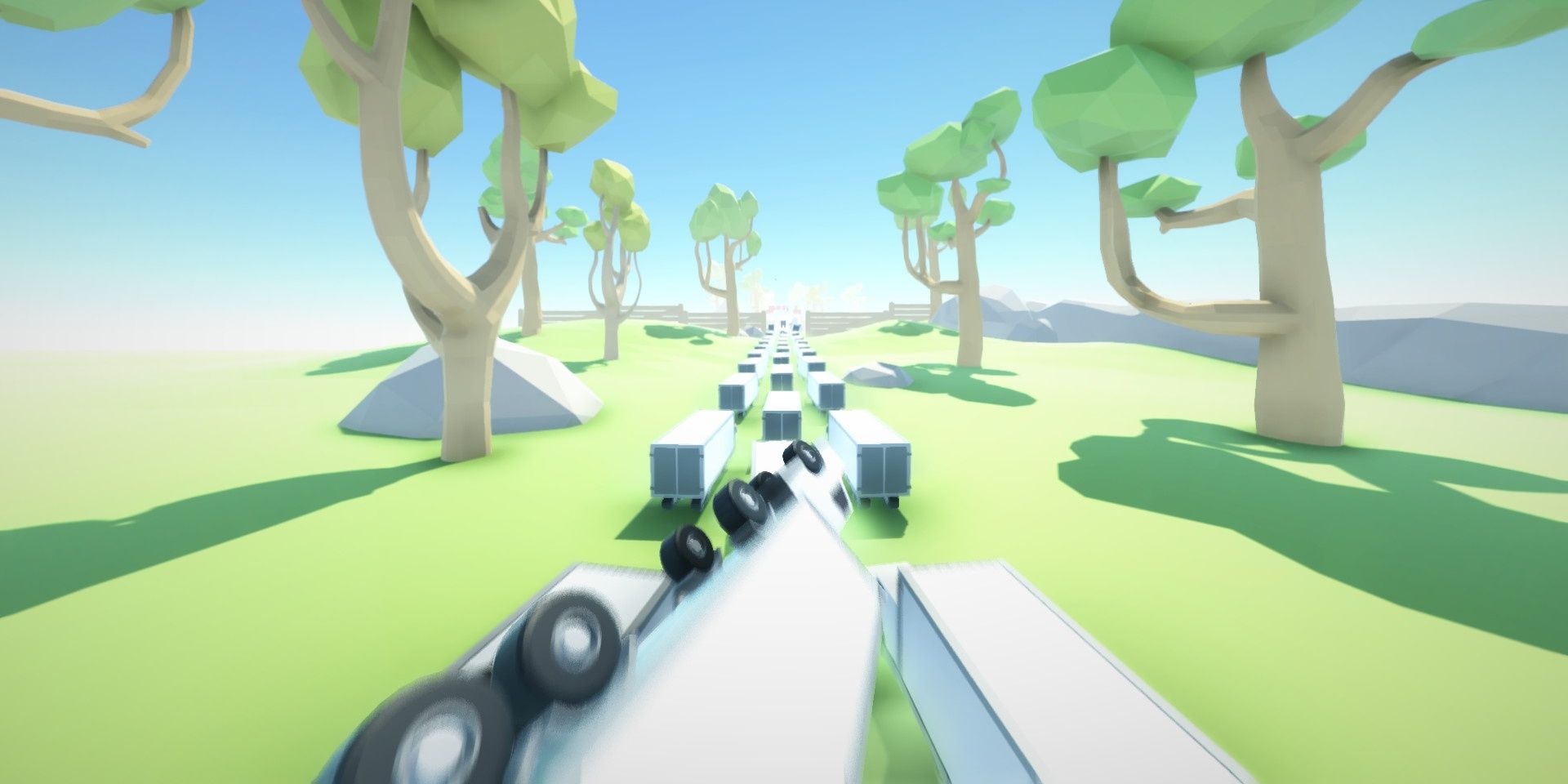 If you've ever played a skateboarding game, you'd understand how satisfying it is to perform even the simplest trick and stick the landing. Now, what if Clustertruck allowed the player to have that kind of satisfaction? Well, with the Trucker Flip ability, it's possible.

With this power, players can cause the truck they are currently standing on to roll and speed forward. This will cause utter destruction to the other trucks in the area, but it also could lead to you reaching the goal a lot quicker and also a way to get through some difficult obstacles. 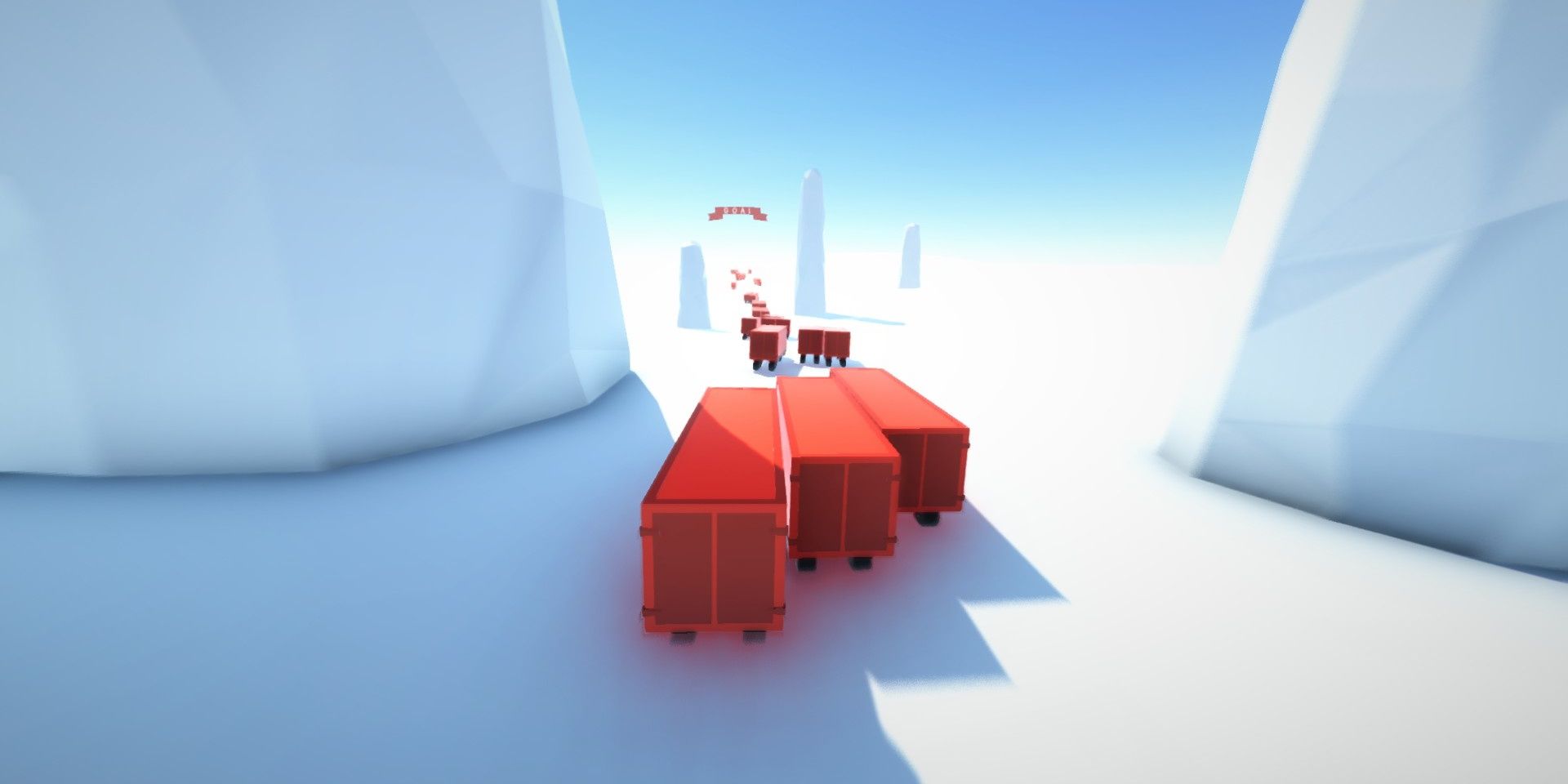 Before the official release of Clustertruck, a demo was released in 2016, where you could experience a few levels of the game in Supertruck mode. Of course, we're talking about the highly popular Superhot.

Superhot's major feature was that time only moved whenever players moved, leading to interesting FPS gameplay. So, with the Supertruck mode in Clustertruck, the vehicles only move whenever the player moves, which leads to some interesting platforming and could be helpful in understanding a level. 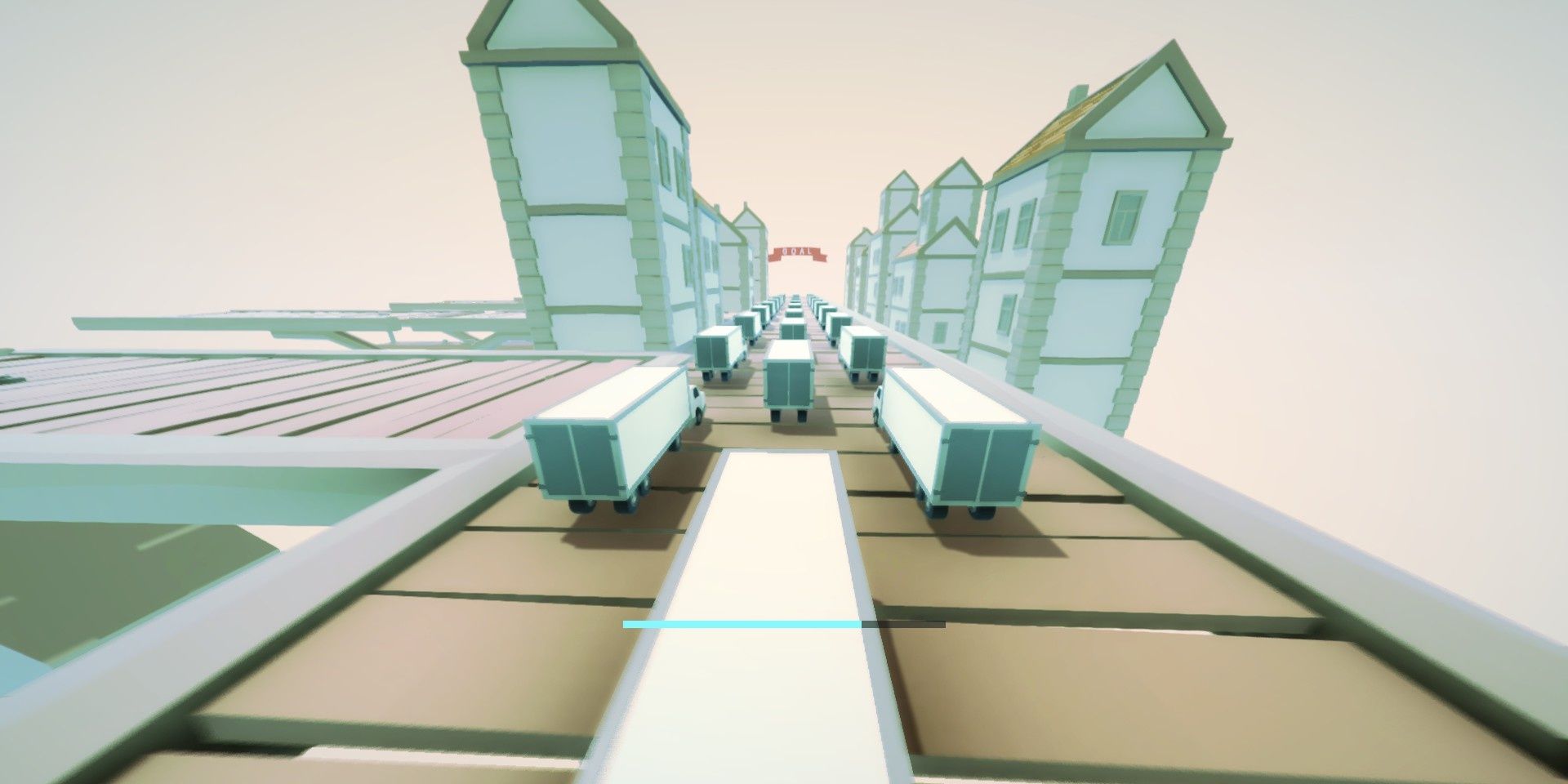 There have been a few abilities listed that involve distorting reality to help make platforming a little easier. However, none of these are as helpful as the ability that requires among the fewest amount of Style Points. That, of course, is Time Slow.

As the name implies, activating it will allow you to slow down time for a limited period. You can choose to resume normal time when you want, or wait for the timer to run out. This allows you to make sure that each jump is as precise as it can be. 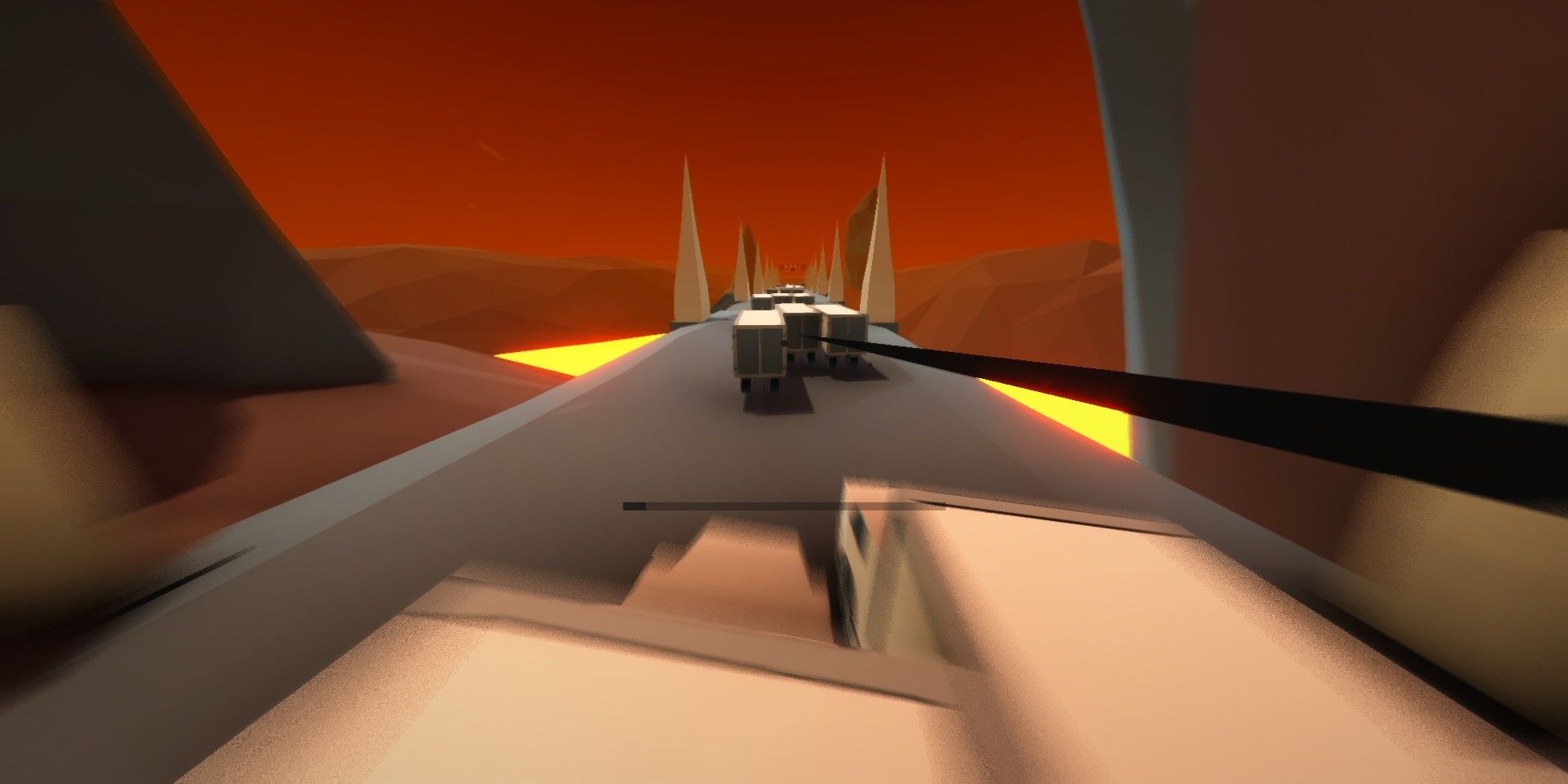 Another trope in platforming games is the grappling hook, so it makes sense that Clustertruck has one of its own. It is one of the more expensive items that are available for players to purchase, but it's worth it thanks to the hook's overall reach.

The Grappling Hook gives you the ability spring forward to the location you choose. You can also swing way past your chosen location to cover a massive distance.