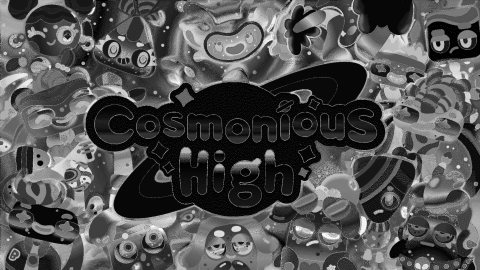 Cosmonious High is another excellent adventure for VR newcomers with a rich, playful world. But those looking for a deeper experience will be left wanting. Read on for our Cosmonious High review.

Cosmonious High would be an amazing pack-in game for a VR headset. Like Job and Vacation Simulator before it, it’s a wonderfully vibrant experience filled with rewarding interactions, complex systems and lovable characters that efficiently showcases the strengths of the medium.

But, if you’ve already graduated from one of developer Owlchemy Labs’ older games and are looking for a deeper gameplay experience, then Cosmonious High might not be for you.

Like Vacation Simulator before it, Cosmonious High sees you completing missions and side-objectives, swapping the sunny island locations for the titular sci-fi school where you play as a new student on their first day. As you arrive the overruling AI system goes haywire and, with the teachers either too busy or outright unwilling to save the day, you and your newfound friends — a cast of plucky misfits and dramatics — step in to fix things up.

To do this, you’ll utilize some newfound superpowers and earn credits, which are your rewards that unlock more areas of the school. They’re given out for completing tasks set by teachers and classmates, as well as taking part in other activities around the school. These objectives often boil down to minigames, some of which borrow heavily from past Owlchemy titles.

There’s another set of cooking objectives like those in Job Simulator, for example, and some of Vacation Simulator’s artistic tools find a new home here too. If you’re new to VR, then these refined versions of past hits will be a joy to discover, but anyone that’s already played through Job and Vacation Simulator will likely find this to be a case of diminishing returns.

On the one hand, this isn’t a big problem. Owlchemy’s mission is to make games that are as welcoming as possible to new VR users and, at a time where Quest 2 is selling so strongly, there’s never been more people to welcome. You could easily swap Job Simulator or Vacation Simulator out of a ‘VR 101’ pack and replace it with this latest beginner’s course.

But, on the flipside, Cosmonious is missing the challenge and gameplay design that would really satisfy those that have been with VR since the days of Job Simulator. And that’s a shame, because it doesn’t have to be a case of catering to one or the other. Cosmonious has more than enough ingredients for an innovative and exciting adventure, but it never pushes them as far as they can go. Super Mario games are universal in their appeal because they expertly onboard people new to games, whilst also engaging and challenging experienced players with later levels that unlock coveted rewards, like Green Stars. Cosmonious feels like it’s missing its own Green Stars.

Take the new superpowers, for example. On the surface, they’re mostly self-explanatory; the resize powers lets you supersize anything from coffee mugs to cafeteria snacks,  whilst fire can melt away ice and water can in turn drown out fire. But you’ll soon discover a set of systems all playing together at once. Take water in one hand, fire it through a stream of ice from the other and you’ll create ice cubes that land and convincingly scatter about the floor. In one class you can create liquids that change the fundamental properties of objects and characters, then combine them with the water power to shoot jets of helium that make teachers talk in squeaky voices. Every area in the game (give or take about 15 separate rooms you’ll revisit time and again) is filled with new items to discover and characters to meet, which often means new ways to apply your powers, too.

But, while the story missions certainly have moments of ingenuity, it’s almost always up to you to dig for Cosmonious High’s most surprising and impressive features. Most of the core progression in the game only requires you to utilize its powers in the most rudimentary and familiar of ways: scale down obstacles to reveal hidden passages, put out fires with water or master telekinesis to grab items from afar. But each ability has the potential to be used in far more innovative ways. You have the ability to resize your hands to hilarious effect or even expand your classmate’s heads, but there’s never any actual application for it in the game. The property-altering liquids have literal gallons of possibilities, from flattening objects to slip them through cracks or covering everything in sticky paste so they root to the spot, but you’ll forget they even exist once you’ve left that classroom.

It’s not just the powers that go underutilized. There’s an entire working organ piano in the back of the music class, but having finished the story and gained 85 of the 100 credits up for grabs, I’ve never once had to properly interact with it. A lot of the game’s credits are also locked behind designing posters using a stamp machine, serving up ‘mystery meals’ to hungry students, or drawing and painting with the water and crystal tools. In these instances, you can put in as much or as little work as you want and the end result is the same, whether you fire a single splat of paint and submit your creation or spend hours playing Picasso, you get the same point at the end. You could chop, fry and smother a bunch of ingredients in sauce before sandwiching them between two pieces of bread and handing them to an unfortunate teacher for lunch, but you’ll get the exact same reward if you simply grab an apple from the fridge and pass it to them.

There is the potential to be inventive with your solutions. I found myself unashamedly proud when, before obtaining the fire power, I discovered an item I needed had been frozen in ice. I backtracked to the laboratory, fired up a beaker of hot water and then poured it over. Rather than waiting to do what you might think is the “correct” thing, I was able to sequence break the game in some small way because the world reacts as you’d expect, and not in service to the game’s mechanics.

Another task, meanwhile, has you waving a conductor baton in the air as the school choir harps their way through the tune. The first time I did this I thought my role was entirely superficial and that the song was progressing regardless of my arm-waving. It wasn’t until later that I realized the choir was holding every note until a sudden change in direction of the baton signaled them to move on to the next. Suddenly I had a reason to unearth the expressive beauty that’s at the heart of so many of the game’s activities.

Not everything gets a consistent reaction (and it’s a little weird that encasing a teacher in fire doesn’t raise so much as an “ouch”), but you’ll be constantly impressed by the sheer amount of these happy accidents and easter eggs awaiting you in Cosmonious if you get your hands dirty with its systems. I just wish the game made that exploration an essential element of progression. Again, if you’re discovering VR for the first time, then this astonishing level of interaction is going to feel revelatory, and you definitely shouldn’t skip on Cosmonious High as an incredible means of familiarizing yourself with the platform. But there’s a missed opportunity to expand on these foundations; why not implement objectives that require you to bounce items between walls with the appropriate liquid or craft icy racecourses to slip and slide across?

And that stings, because no one builds worlds like Owlchemy. Almost every inch of Cosmonious High is a testament to its immersive, comfort-first design philosophy, with impeccably slick interactions like swiping through instructions on tablet-style notepads. The game is virtually free of awkward VR jank and nausea (although, ironically, one mission in which you move a planetarium projector around nearly saw me completely lose my balance as the world shifted around me) and it’s an almost unbelievable technical achievement on Quest, where fluids convincingly slosh from one side of a beaker to the other and objects have their properties altered right before your eyes. Your classmates are a real achievement, too, ready to react to your every interaction from chucking them items from across the room to spraying them with water. The emoji-based dialogue system isn’t quite the same success story, as it often left me confused as to if I was communicating even just a message of encouragement or actually disagreeing with someone.

Cosmonious High is a tricky one. It’s a game for those still finding their feet in VR; Owlchemy’s latest — and greatest — iteration on how best to introduce newcomers to the medium. There’s a vibrant and diverse cast of characters to talk to, entertaining, if familiar, superpowers to experiment with, and a richly-detailed world that hides a huge amount of secrets and easter eggs. It’s so good, in fact, that you wish there was more here for the people that have long since graduated from introductory VR experiences – those that played Job Simulator six years ago and have stuck with VR ever since.

Instead there’s another run through the Owlchemy staples, from cooking to painting, with a some of new ideas thrown in. And, for all the complexity of its emergent systems, Cosmonious never really challenges or pushes you with its core story, instead hoping you’ll discover its deeper interactions as if by chance. Take the time to dive into that sandbox and you’ll be amazed by just how far you can push its mechanics and frustrated that they don’t take center stage in the core campaign.

In other words, Cosmonious High is another fantastic place to start for VR newcomers but, four games in, maybe it’s time Owlchemy started to think about loosening those training wheels a little.

This review was conducted on the Meta Quest 2 version of the game. What did you make of our Cosmonious High review? Let us know in the comments below!