Hot on the heels of his continuing successful Burn Bryte game, tabletop roleplaying game designer James Introcaso has released My Dad’s Monster Manual, an 87-page sourcebook of creatures for use with the fifth edition of the world’s most popular tabletop roleplaying game. Since its launch on December 15, the sourcebook has already made it to the number one spot on the DM’s Guild Top 100 Products list, as well as becoming a Silver Best Seller.

My Dad’s Monster Manual features “80 new stat blocks and lore for original D&D creatures inspired by the art of the Monster Manual”. In other words, Introcaso has taken creatures you know from the official Dungeons & Dragons Fifth Edition Monster Manual and revamped them with new names and new stats. But that’s not the whole story, or even the best part of it. He mostly had the task of roleplaying as a scribe and archivist in the development of the book. The real imaginative inspiration came from his dad, Lucian Introcaso.

As the younger Introcaso tells it via Twitter, he tweeted a joke last Christmas “about showing my dad the art in the Monster Manual and rewriting lore and stat blocks based on his responses.” The magnitude of replying tweets he received in response made it clear that his audience and fans were in agreement. So, he asked his dad if he was willing to go along with it, and thankfully he was. 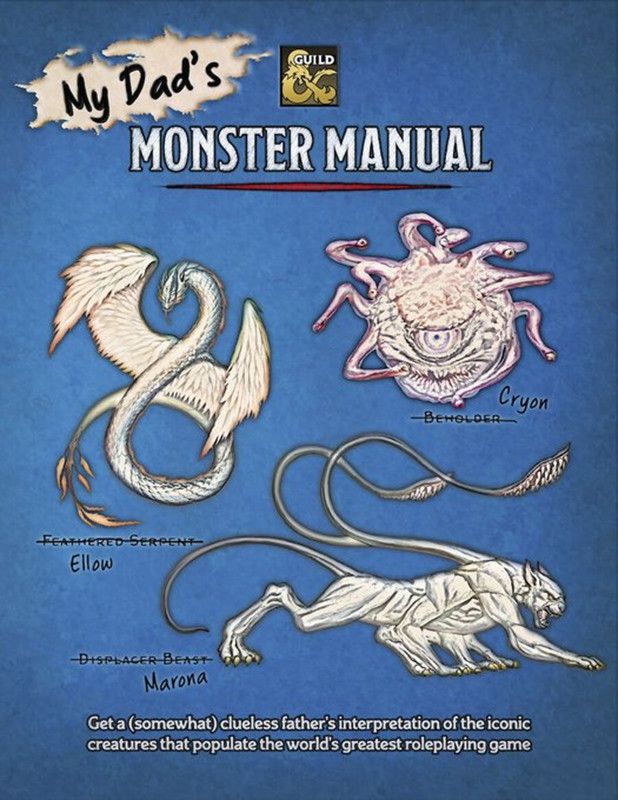 Introcaso goes on to describe the process by which he developed the book. He would show his dad a creature from the Monster Manual (just the art, not the description or stat block), and ask him a few questions. “What did this monster do? Where did they come from? What do they want? What are they called?” He then simply recorded his father’s replies and spent a few months compiling them into the finished product.

So, what you have now is “a book of unexpected, fun, and unique monsters” for your fifth edition campaigns. While you and your players may find them familiar-looking, they are in fact totally not the creatures you know. For example, the popular Owlbear is here called a Barowel, is classified as a neutral-aligned large Fey creature, and has a strong fondness for fruit, particularly coconuts and pineapples. 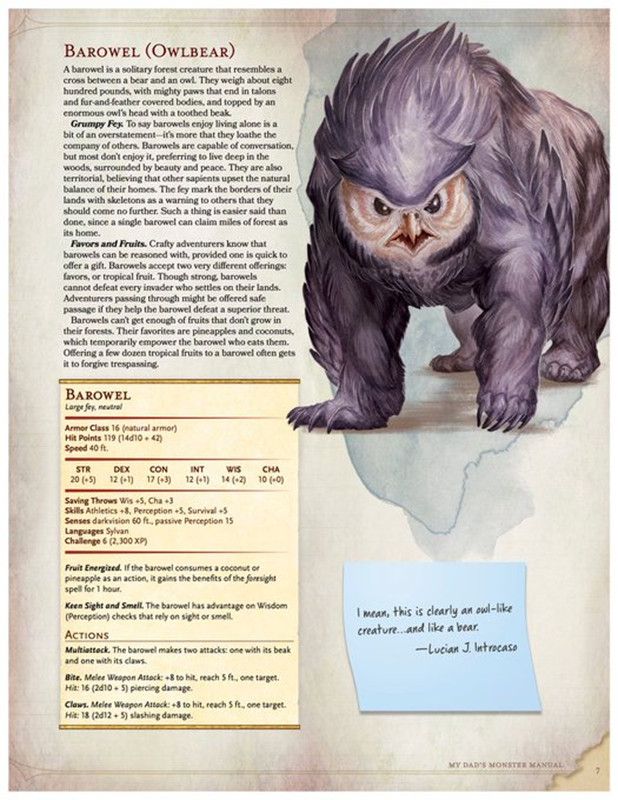 The book is filled with such re-named and re-statted creatures, but the true beauty within comes from the sticky note quotes from Lucian Introcaso himself included with every creature. “Their fatal flaw is that they’re lonely”, posted with the Marktaur (Tarrasque). “This looks like something out of the Flintstones”, he said of the Pedrik (Xorn). “This is a class of chicken dragon”, he states, regarding the Turkgon (Fire Snake).

The Twitter thread has more of the story, including naming the other quality team members who helped bring the book to life. My Dad’s Monster Manual is available on the DM’s Guild in full-color PDF ($14.95), softcover ($24.95), and the package deal for $29.95.

[This article’s writer thanks James Introcaso for gifting them a PDF press copy of this most excellent and delightful sourcebook!]