Darkest Dungeon: How To Beat The Hag

Darkest Dungeon will push you and your heroes to the edge with the many challenges you’ll find in the depths of the Darkest Estate. During your expeditions through the different areas of the estate, you’ll often encounter bosses that you must defeat in order to progress.

While some boss battles are fairly straightforward, others have special mechanics that will undoubtedly annoy you. The Hag in the Weald is one of these bosses as she utilizes a large cooking pot as part of her battle. Here are our recommendations on how to beat the Hag and the best party setup you should use. 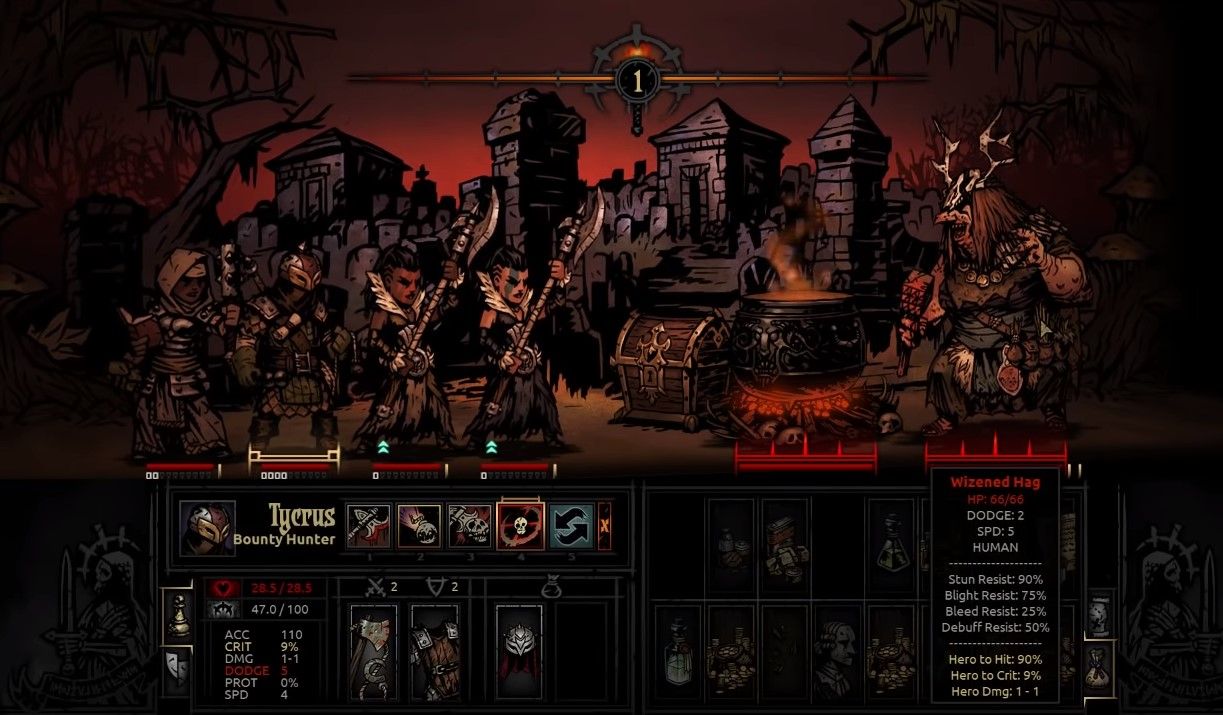 Make sure all of your party members are well-equipped and be sure to bring along enough provisions and torches as the boss fight is usually in the final room on the map.

When it comes to your party setup, we recommend using the following heroes:

This means you need to prioritize heroes who can hit positions three and four, which is why we recommend Hellions or Bounty Hunters for the majority of your party setup.

The next thing you need to know is that the Hag will chuck one of your party members into her pot periodically (where they cannot act), so you’ll largely be fighting this battle with only three heroes.

Whoever is in the pot will slowly have their health reduced, and they will only leave the pot once they reach 0 health (at Death’s Door), or if you damage the pot enough for it to spit them out.

Your party will all shuffle forward when someone is thrown in the pot. Then, once the hero is kicked out of the pot, they will take position one in your party and the others will fall back in line. Keep this in mind as it might mess up your plans depending on your party setup.

While you can save the hero by attacking the pot, we don’t recommend you wasting your time and effort on doing this as the Hag will simply chuck someone else in. You are better off focusing on whittling down the Hag’s HP and having your Vestal ready to heal up any heroes being kicked from the pot, or the Vestal themself if they are unfortunate enough to be chosen. We don’t recommend the Occultist as a healer because their healing move inflicts Bleed on the recipient and it might only recover 1 HP anyway, which is too unreliable for what you need here.

The Hag benefits from having more than one move per turn, and though her attacks deal low damage and focus more on increasing stress in your heroes, don’t be fooled into thinking this fight will be easy. The Hag’s Meat Tenderizer move will hit all of your heroes and seeing as there will regularly be a hero at 0 health (once they leave the pot), even the Hag’s weak attacks can have deadly consequences.

The Hag is resistant to Stun and has a high resistance to both Blight and Debuff, however, she is fairly susceptible to Bleed — another good reason to have a Hellion (or three) in your party.

Essentially, the best plan of action is to ignore the pot and whatever poor hero is thrown in there. Devote your Vestal to healing heroes as they get kicked out of the pot, and focus all other heroes on attacking the Hag, inflicting Bleed on her too if you can.