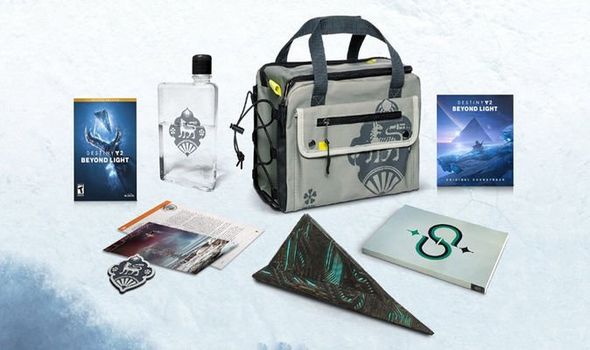 Fans waiting on big Destiny 2 news this week sure got a lot of stuff to look over with the release of Season of Arrivals today.

Not only did a new update go live today on PS4, Xbox One and PC, but Bungie also introduced Season 11, along with a new Dungeon to explore.

But while there is plenty to check out following today’s patch release, we also know that the next major expansion for the game is coming in September.

Destiny 2 Beyond Light was announced via a live stream event, and the Bungie Store is now offering the first pre-order bundles for it.

Steam gamers can purchase the standard version of Beyond Light now, costing just under $50.

The Destiny 2: Beyond Light Collector’s Edition is also available to preorder across all platforms and is priced at $199.99.

This includes the following:

Digital Products delivered via Email on or before September 22, 2020:

Destiny 2: Beyond Light includes the following content, as announced by Bungie today:

A new power is born out of the ancient Pyramid ship above Europa, and a dark empire has risen beneath. In the Destiny 2: Beyond Light expansion, Guardians will explore a changed universe, with a new destination, new adventures, and even new powers to explore.

Explore Europa: In Beyond Light, Guardians will be called to a new destination: Jupiter’s frozen moon of Europa. Brave the unrelenting glacial frontier, infiltrate the Golden Age Braytech facility, and uncover the secrets that lie deep under the ancient ice.

Wield the Darkness: As a new threat emerges, so too does a mysterious new power – Stasis. Rooted in Darkness, Guardians will wield this new elemental power alongside Arc, Solar, and Void to summon epic supers and control the battlefield. Titans, Warlocks and Hunters will each use Stasis in a different way. More details on Stasis to come later this summer.

A New Raid: Below the frozen tundra of Europa lies the Deep Stone Crypt. For decades it has remained dormant. Guardians will test their skill and teamwork in this brand new six-person raid, where glorious rewards await.

The Rise of Eramis: The splintered houses of the Fallen have rallied and built their new empire on Europa, united under the banner of the Fallen Kell of Darkness, Eramis. Abandoned by the Traveler and left by the Light, Eramis is on her own journey into the Darkness, and towards a collision course with Guardians.

How Long Is Ghost Of Tsushima?

Guide: Ghost Of Tsushima Pre-Order Bonuses, Special Editions, And More
We and our partners use cookies on this site to improve our service, perform analytics, personalize advertising, measure advertising performance, and remember website preferences.Ok