We’re a month away from the launch of Destiny 2’s next expansion, Lightfall, and details are starting to pour in. Last week, Bungie posted a massive blog post outlining a series of major changes coming to the buildcrafting system next season. There’s a lot of details that are worth looking into if you’re interested in buildcrafting, but the gist is that the entire armor modification process is getting streamlined in Lightfall, and players will be able to create multiple loadouts using a single screen system.

The current system has been built up little by little over time, so in order to consolidate and simplify buildcrafting, a whole host of mechanics are getting removed. Mods will no longer have energy types that restrict what gear they can socket into, champion mods will be spread out across Artifacts, subclasses, and other sources, and armor mods are getting retuned to help make buildcrafting easier. There will be a number of gameplay changes to help support the new buildcrafting system as well. One in particular has excited the community: no more Match Game modifiers on high-difficulty activities.

I stand with the Destiny 2 community in celebrating the death of Match Game, but also, I don’t. My first reaction was overwhelmingly positive, but the more I think about it, the more I appreciate the challenge that Match Game created. I don’t want to lose the team planning that went into preparing for each Nightfall, and more importantly, I don’t want Match Game to be replaced by a worse form of difficulty modification. I totally get why everyone hates Match Game, but if we’re being honest, was it really so bad?

Match Game is a simple and straightforward mechanic. The modifier makes all enemy shields extra-resistant to non-matching energy types, meaning players were required to bring weapons and abilities that matched whichever shield types were prevalent in the activity. If a particular Nightfall features Solar and Void shields, you have to make sure at least one person on your team has a Solar and Void weapon. For the hardest content, it’s often worthwhile to bring at least two of each, and every once in a while you’d have to be prepared to bring all three energy types.

Match Game on its own isn’t a big problem, but as soon as you’re also trying to counter Champions, it can get pretty complicated. Any given Nightfall will require your team to bring two different champion mods and two different energy types. A team of three only has nine weapon slots total, so maximizing your coverage is essential. Before attempting end-game content, you have to figure out who’s bringing anti-barrier, who’s bringing Arc damage, and so on, until you’re sure you’ve got all your bases covered. 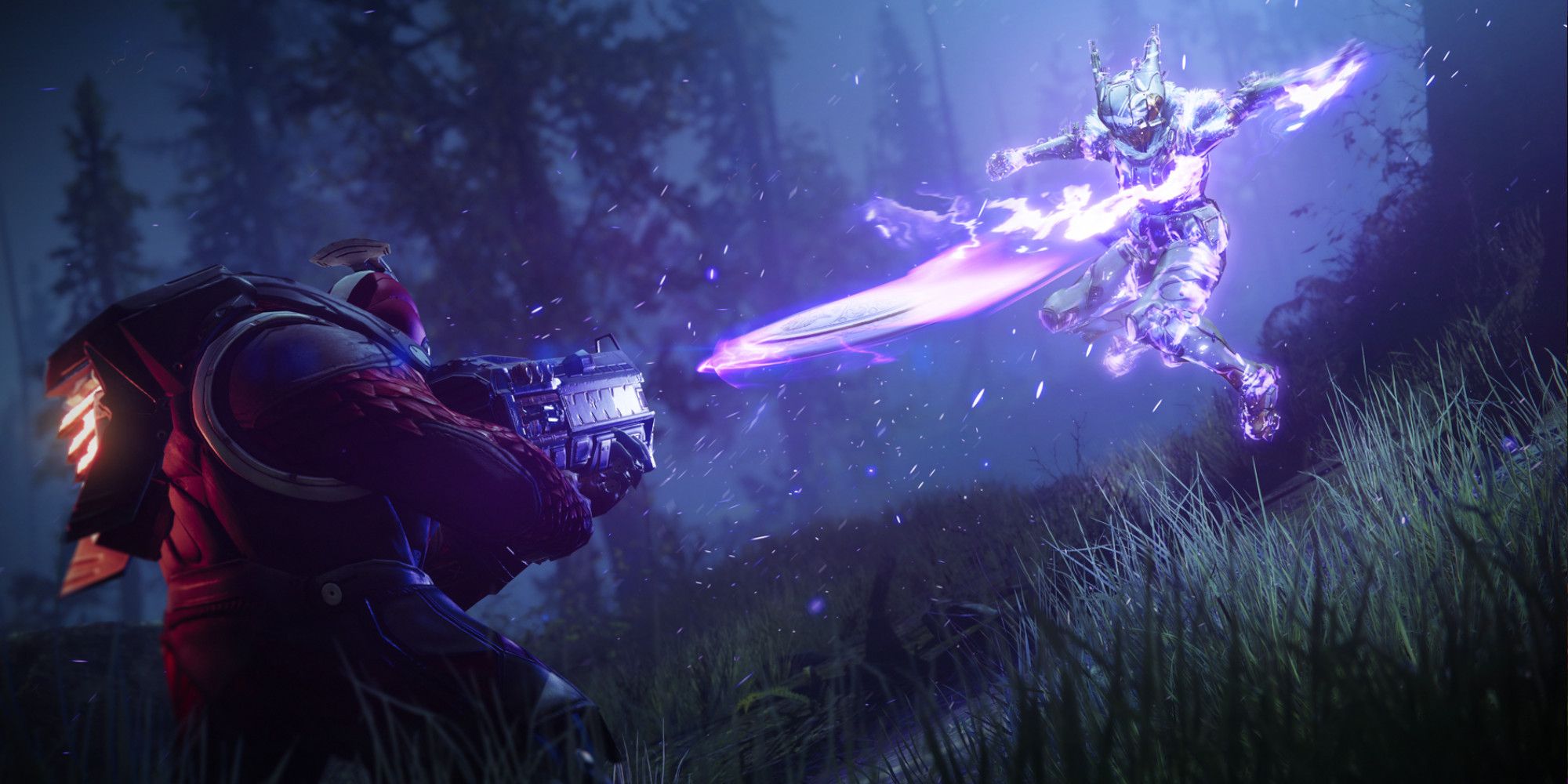 Bungie’s explanation for why it decided to remove Match Game makes perfect sense. By removing the restriction, players will have more freedom to buildcraft the way they want to, and hopefully, leverage the new mods coming in Lightfall to better effect. By not forcing players to bring specific energy types on top of Champion mods, players will have more opportunities to experiment with builds and use the tools they prefer to use.

This will undoubtedly make buildcrafting freer, but I’m not yet convinced it will make it more creative. The heavy restrictions that Match Game creates has always led to lots of creativity and experimentation for my friends and I, and even though it can be a pain to figure out, it resulted in many interesting runs. Putting together the Match Game puzzle pieces often requires you to use weapons you normally wouldn’t, which can lead to fun discoveries. One week I was on the hook for Overload and Void, so I dug out my combat bow, Le Monaque, which is an exotic I had never spent much time with.

I realized in that Nightfall how much I loved Le Monarque, and it led me to experiment with other Combat Bows later on. There are so many weapons in Destiny 2, but I often find myself over relying on guns I’m already comfortable with instead of seeking out new tools to use. Match Game always got me out of my comfort zone and forced me to try new things. I’m worried that by removing the restriction, we’ll see a stale meta develop where everyone just uses the exact same over-tuned guns every season.

I’m also concerned about what kind of challenge will fill the void left by Match Game. Spreading out Champion and energy type coverage across your fireteam means that one person can’t have all the bases covered. When you’re faced with a shield you can’t break, you have to rely on a teammate to swoop in and handle it. I’ve always considered that a positive of Match Game because it forces every person on the team to pull their weight and be responsible for dealing with specific threats. If everyone can break shields on their own in Lightfall, will there be fewer opportunities to rely on and support your team?

I hope shielded foes don’t just become even bigger damage sponges as a way to maintain the difficulty. I hope that Lightfall’s new enemy type, the Tormentors, introduce some kind of team-based challenge to Nightfalls. I hope the new mod system has built in weaknesses that force you to rely on your teammates, rather than give you all the tools you need to get the job done by yourself. As frustrating as Match Game is, it added a lot of interesting challenges to activities. I’m not mad that it’s going away, I just hope whatever replaces it is better.