To keep things spicy, every couple of expansions, the Digimon Card Game releases a side set. These side sets usually follow a specific theme and offer brand-new decks for players to jump into without needing to purchase too many cards outside the set itself. In EX3 Draconic Roar, players are introduced to roughly five new decks' worth of cards all revolving around powerful dragon Digimon.

Dragons like Azulongmon, Dorbickmon, and even the last Royal Knight to be introduced in the Digimon Card Game, Examon, are all but some that are supported in the set. Not only are the new decks getting some love, but older decks like Machinedramon and D-Brigade get their own support that can push the decks to be a bit more viable against the new and best threats from the set. 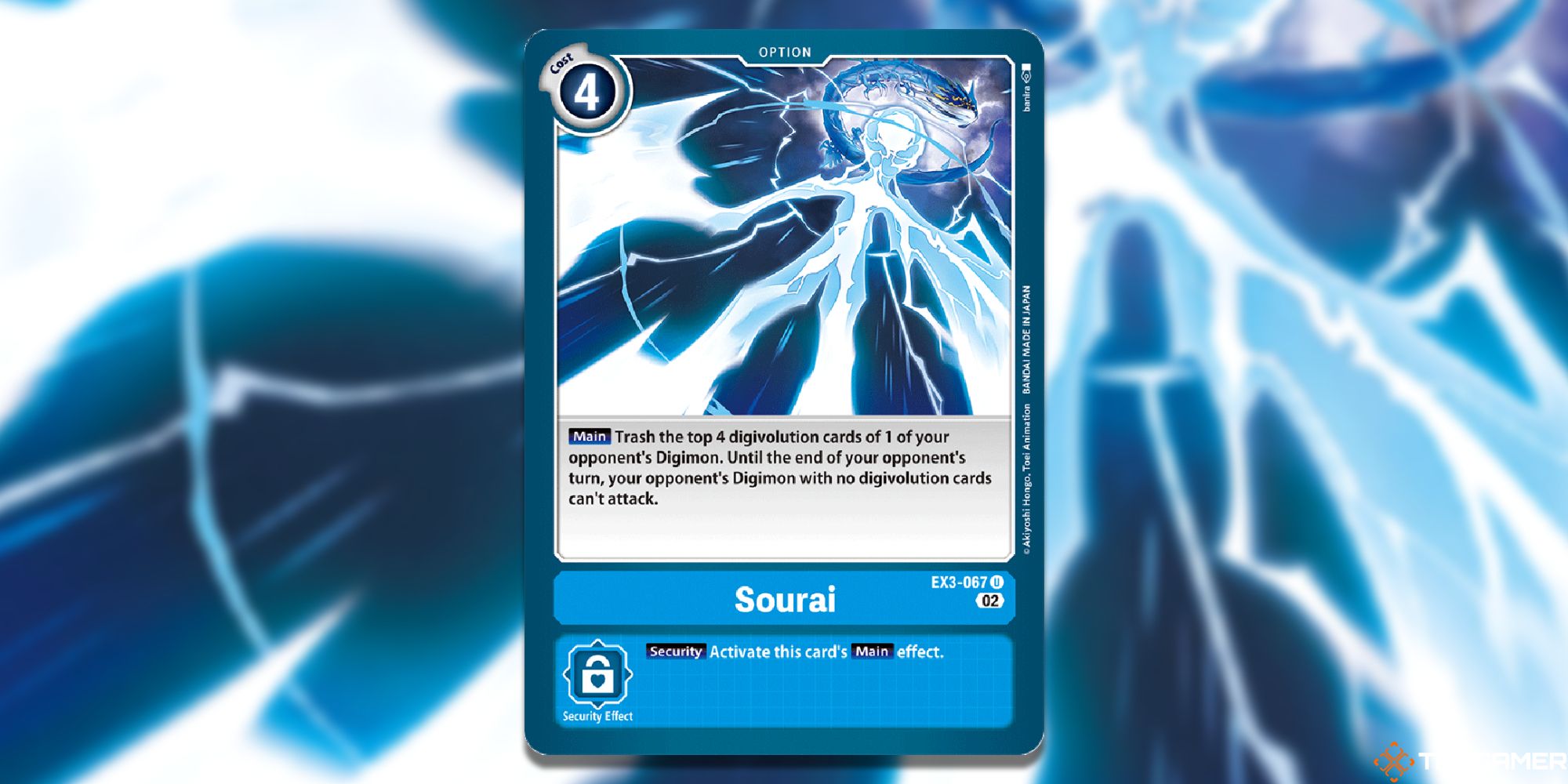 Especially against decks that tend to garnish a bit of sources like BlackWarGreymon. Sourai doesn't change the Blue Flare game plan drastically, but rather gives it a bit more consistency when trashing Digivolution cards.

9/10 Trial of the Four Great Dragons 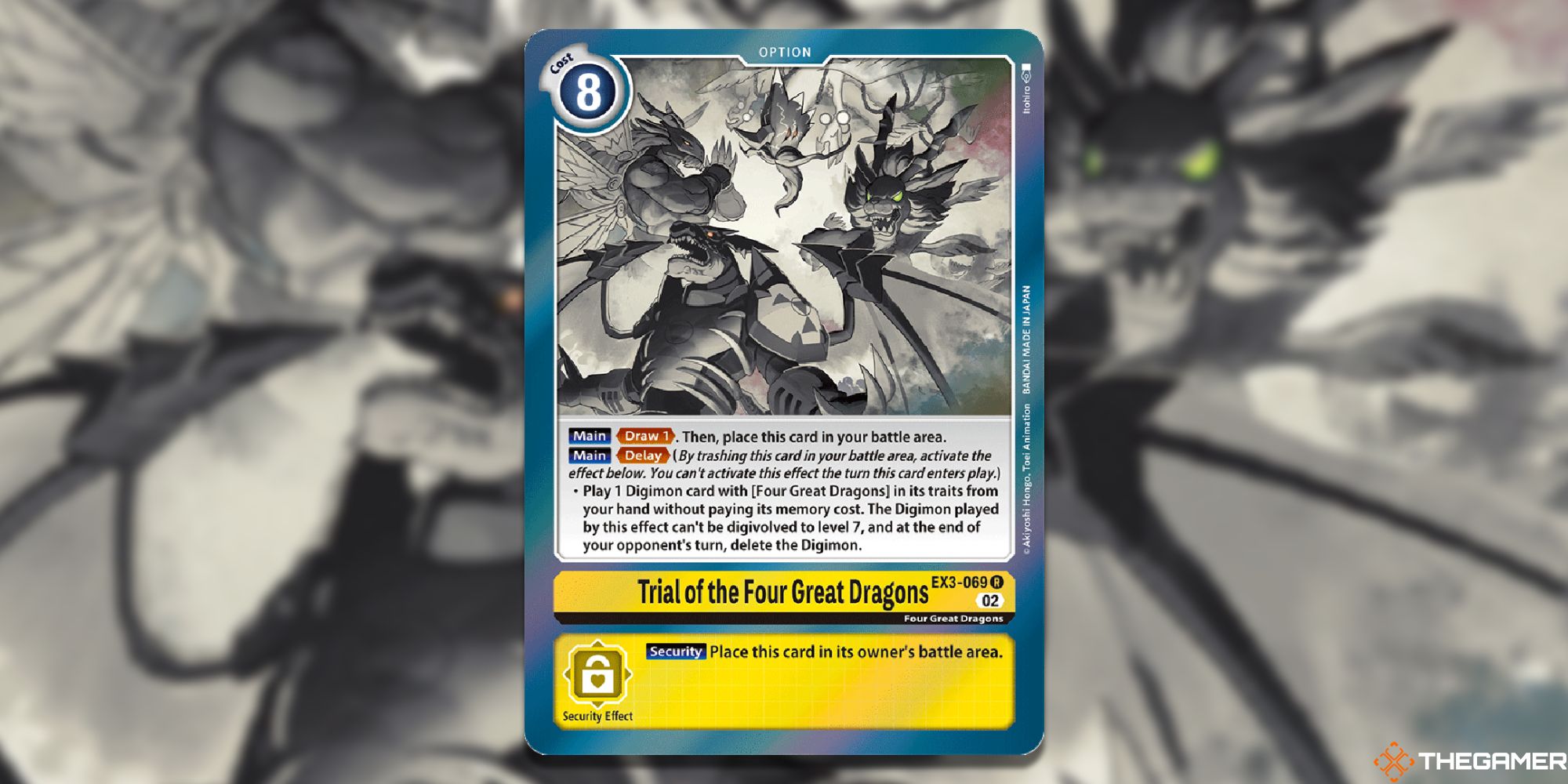 Trial of the Four Great Dragons is a brand-new style of card for the Digimon Card Game. Closely resembling some of the best Field Spell cards in Yu-Gi-Oh!, this card lets you play one of your Four Great Dragons without paying its play cost.

Although it might seem steep at eight memoryt, this card can be replayed for free through two of the dragons' On Deletion effects. This, combined with EX3 Angewomon's When Digivolving effect, grants you plenty of options to play Trial of the Four Great Dragons for free. 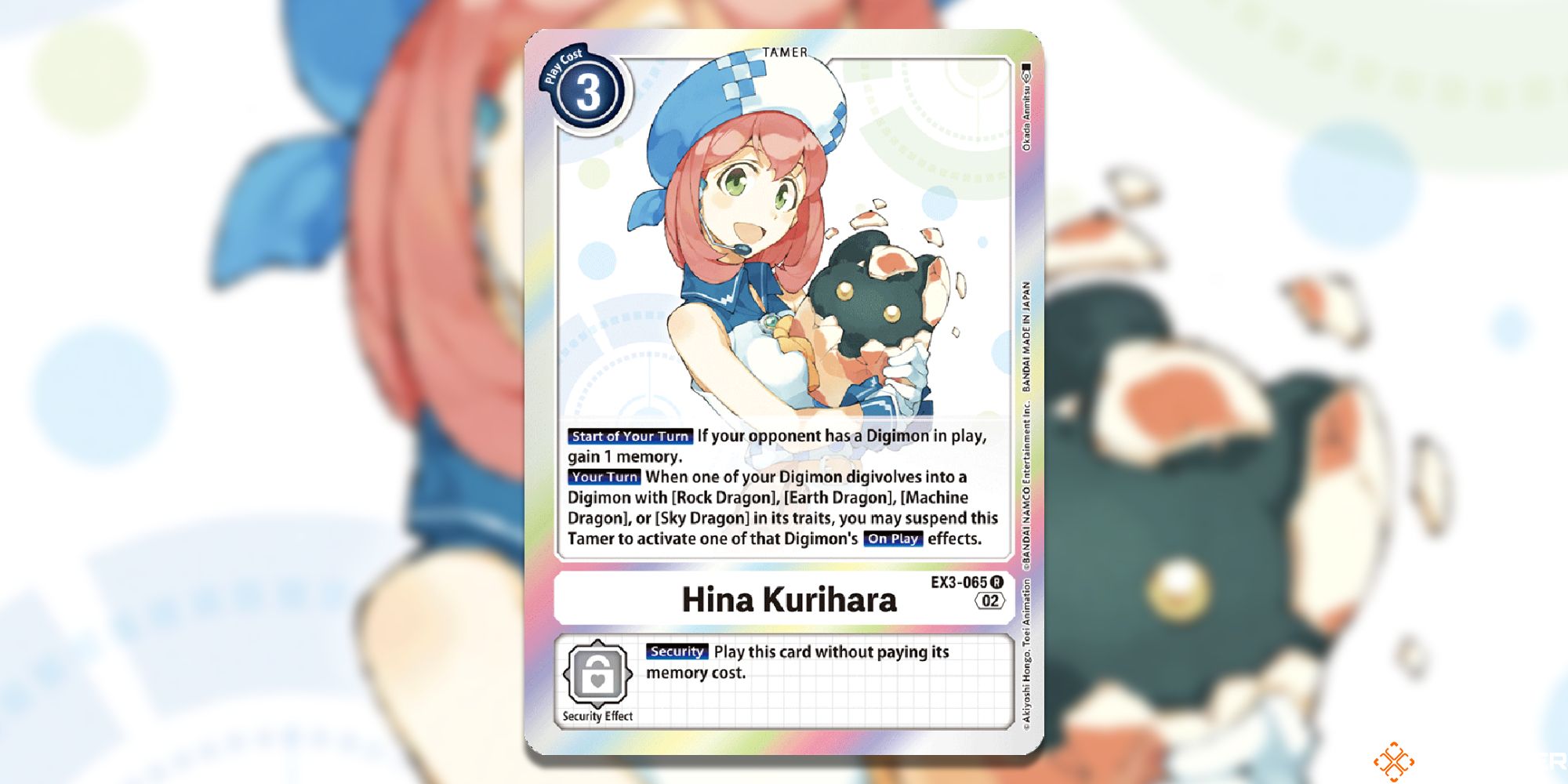 Some of the best parts about side sets are that Bandai will usually try to cater to a specific sect of the Digimon fanbase. With EX3, players are introduced to Hina Kurihara, the navigator from the now-defunct mobile game Digimon Links.

Luckily for Digimon Links fans, Hina is remembered in EX3 by giving her a deck with unique mechanics that build on previously released cards like Volcanicdramon. The Dragon Links deck is centered around Hina and her ability to trigger her dragons' On Play abilities, even if they were Digivolved rather than played for their cost. 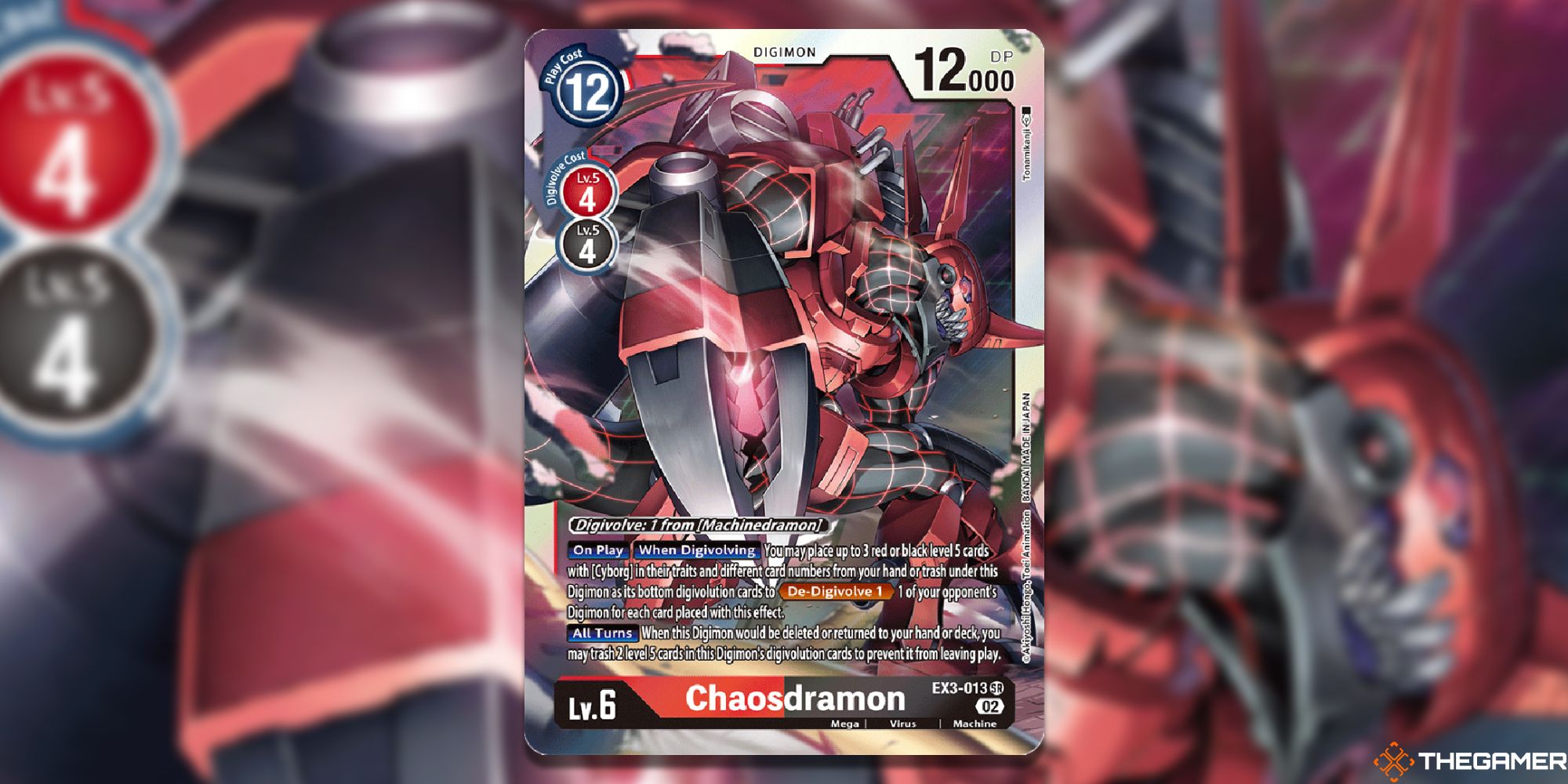 Finally, the Machinedramon deck gets a better piece of removal in the form of the new Chaosdramon. This new version of the card gives you the best of both worlds. It adds up to three more cards underneath your Machinedramon stack, in case you want to do RagnaLoardmon shenanigans, and lets you De-Digivolve an opponent's Digimon by 3, possibly leaving just a rookie in their Battle Area.

Having a Chaosmon that adds even more Digivolution cards underneath gives the deck a much-needed buff. Not only does the RagnaLoardmon combo work even better now, having up to fifteen cards underneath him, but it also opens up the different amount of Cyborg Digimon that can be played in the deck to give Chaosdramon and Machinedramon even more powerful inheritable effects. 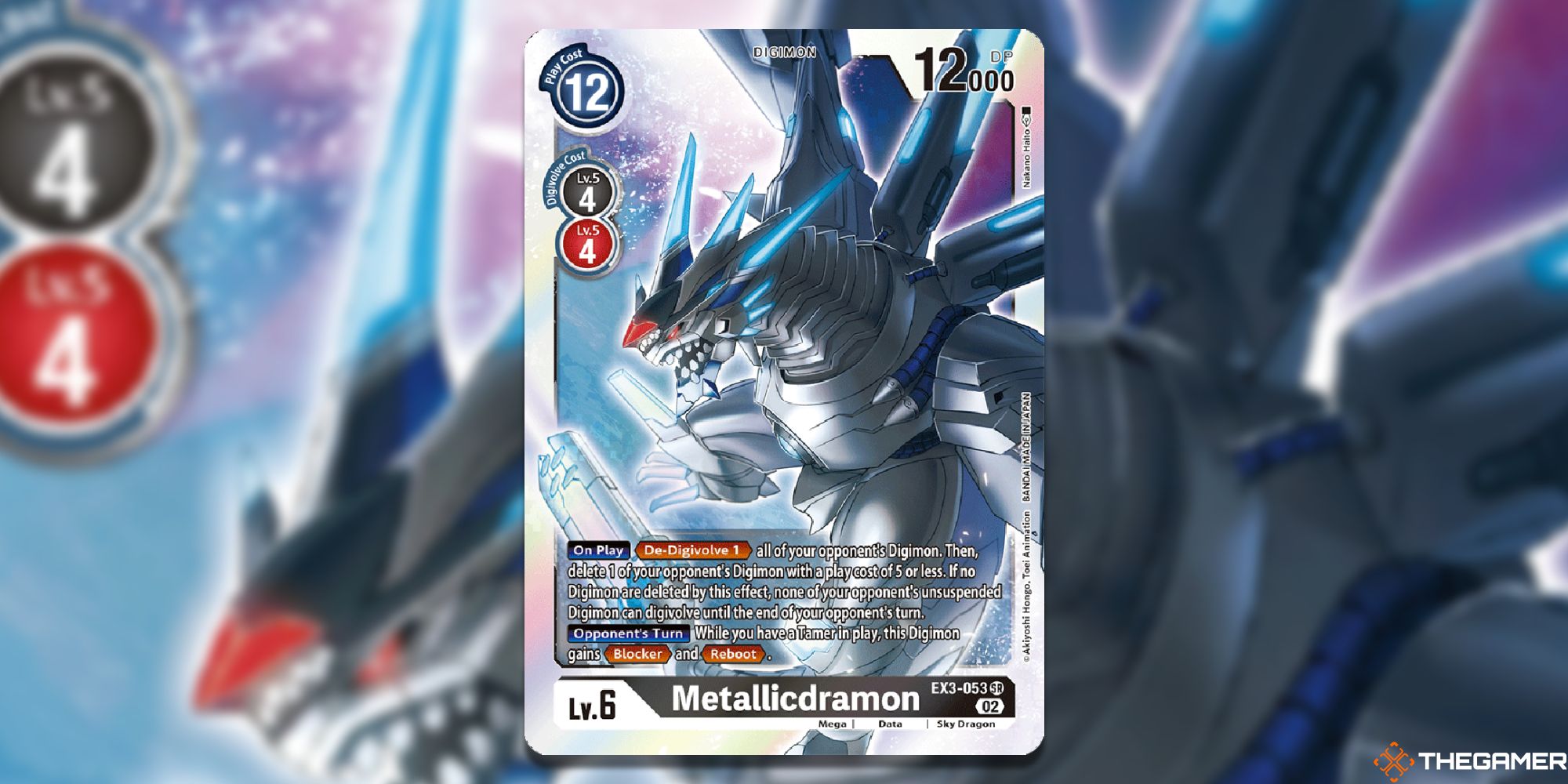 The new Dragon Links deck doesn't seem as good on paper, but with the help of Hina Kurihara, the two boss Digimon become extremely powerful. Metallicdramon is the one that stands out the most. Its On Play effect, which can be triggered when Digivolving by Hina's effect, allows you to De-Digivolve all of your opponent's Digimon, and then delete something with a play cost of five or less.

If nothing is deleted through Metallicdramon's effect, your opponent is not allowed to Digivolve anything that is in play until the end of the turn. The game has seen cards that prevent from playing Digimon through card effects, but never one that prevents Digivolution. This is a new kind of floodgate in the game, and we are here for it. 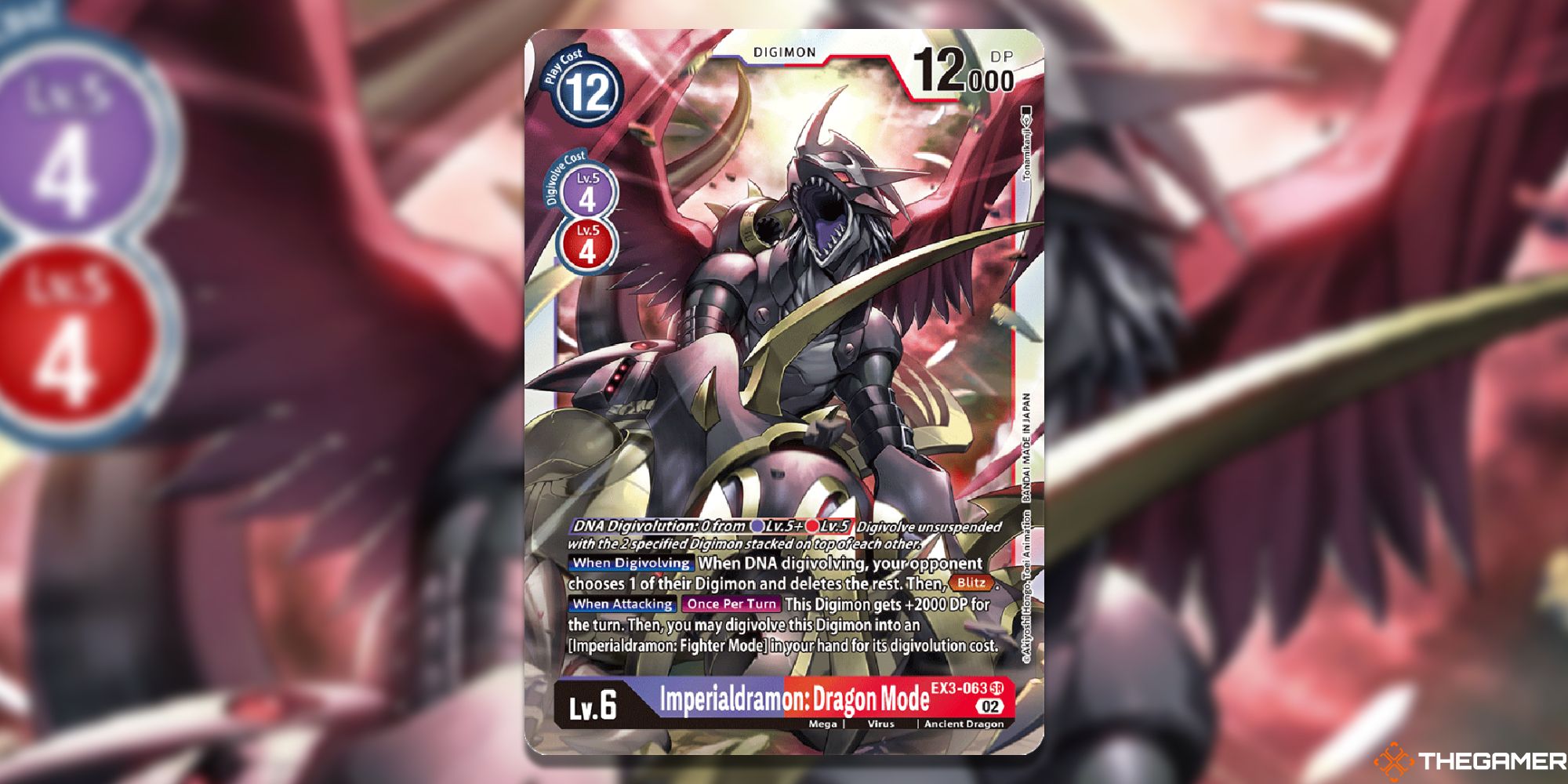 Imperialdramon makes its comeback in EX3 with its new red and purple version. Taking a page out of each color's playbook, the new Imperialdramon deck takes some of the aggressive play from red and the trash resource management from purple, and slaps them together to create this board wipe on legs.

Dragon Mode, combined with the new Fighter Mode, makes the deck dangerous. It can hit quite fast as it constantly brings back Veemon and Wormmon to DNA Digivolve, even after Imperialdramon has been deleted, and extremely hard with Fighter Mode being a 15,000 DP threat with A Delicate Plan built in. 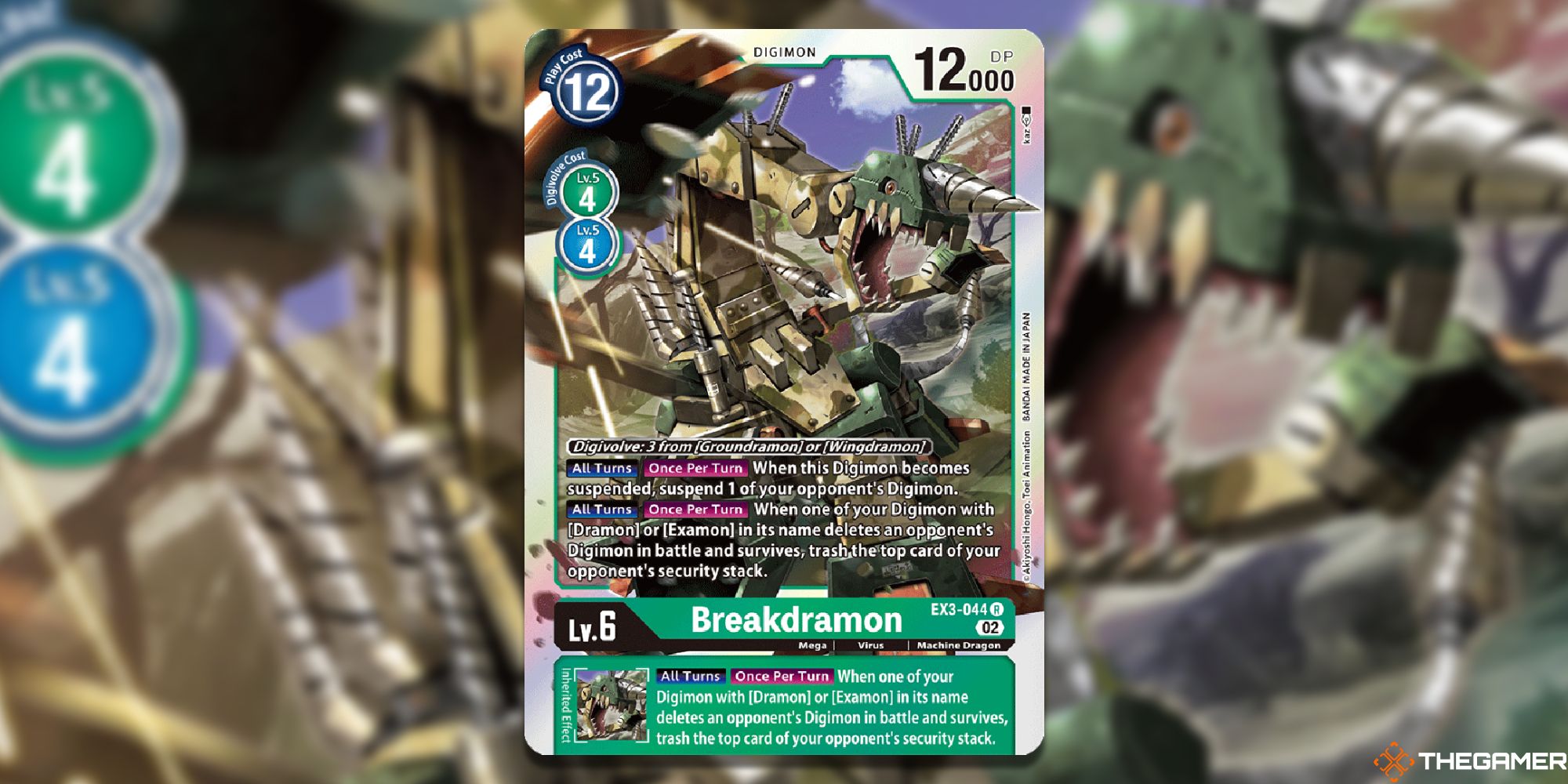 The gameplan for the new Examon deck is pretty straightforward. The goal is to make two level six Digimon as fast as possible, to then DNA Digivolve into Examon and constantly suspend your opponent's Digimon.

The one card that enables the deck the most is Breakdramon. This card lets you trash a card from your opponent's Security whenever one of your Digimon deletes another. Not only is it Breakdramon's main effect, but it is also its inheritable effect, meaning that Examon will also have this effect after DNA Digivolving. 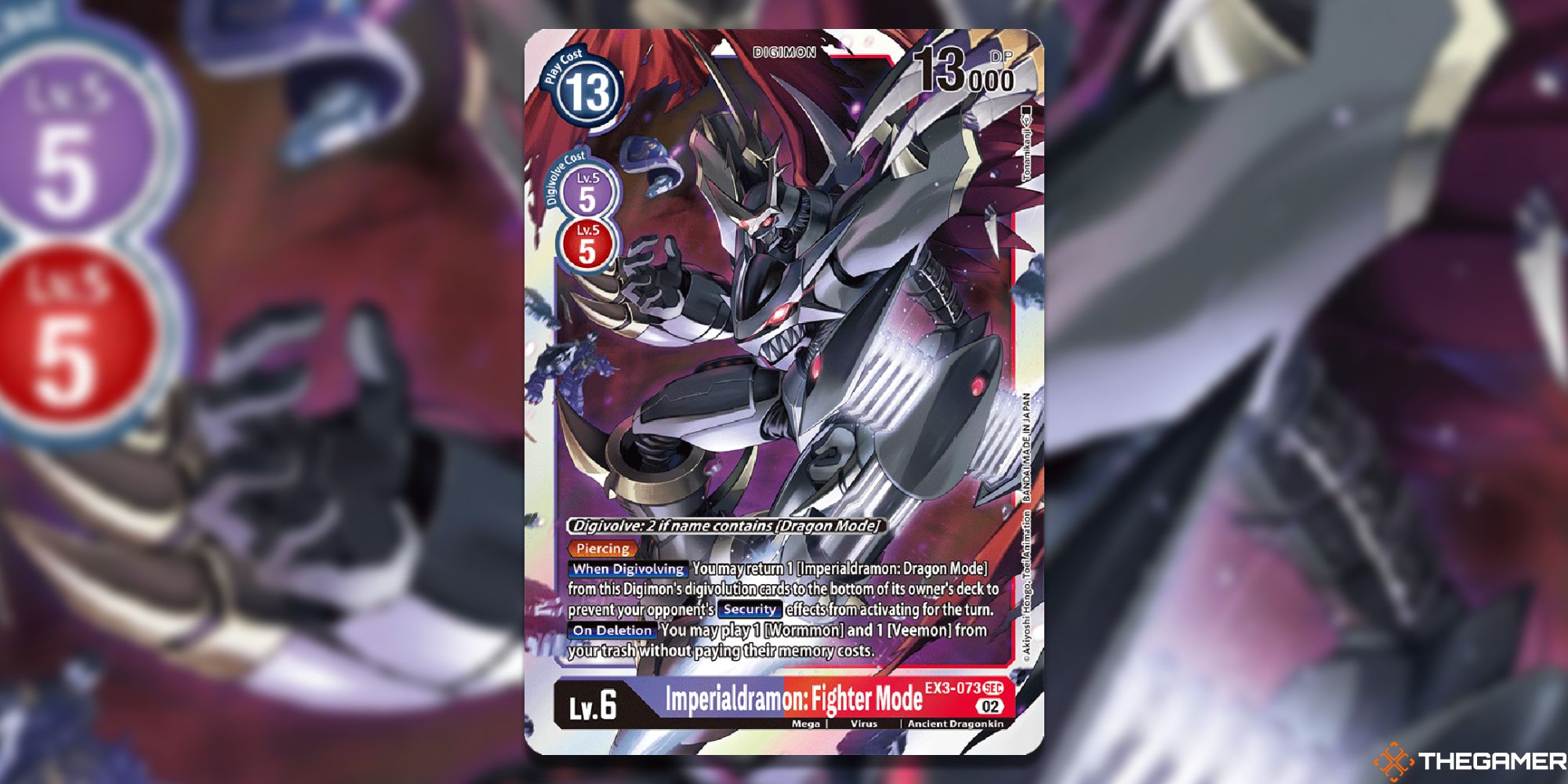 Not only is the new Imperialdramon a huge threat once it hits the Battle Area, with its piercing and effect to negate any Security effects it checks, but if Imperialdramon gets deleted, it lets you play a Veemon and a Wormmon without paying their costs.

Decks built around Imperialdramon move very fast. Rather than slowly building out your two stacks of level five Digimon, the new Paildramon lets you play out a Dinobeemon from the trash when Digivolving, setting you up for another DNA Digivolution with their end of turn effects. 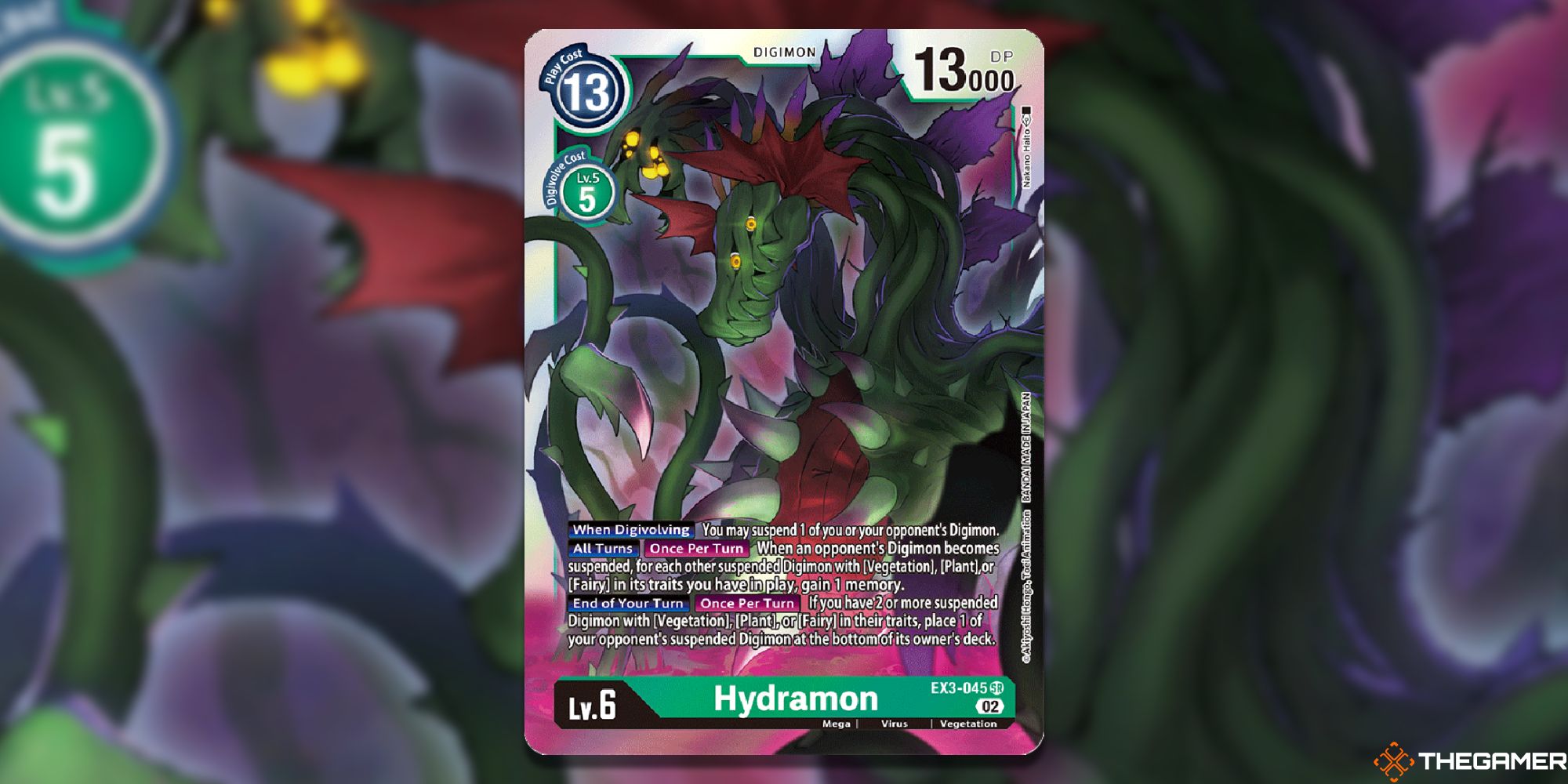 With Hydramon, you are now able to continue your plays after Digivolving into a huge boss Digimon by regaining all the memory spent through its effect, while suspending some of your opponent's more problematic cards. 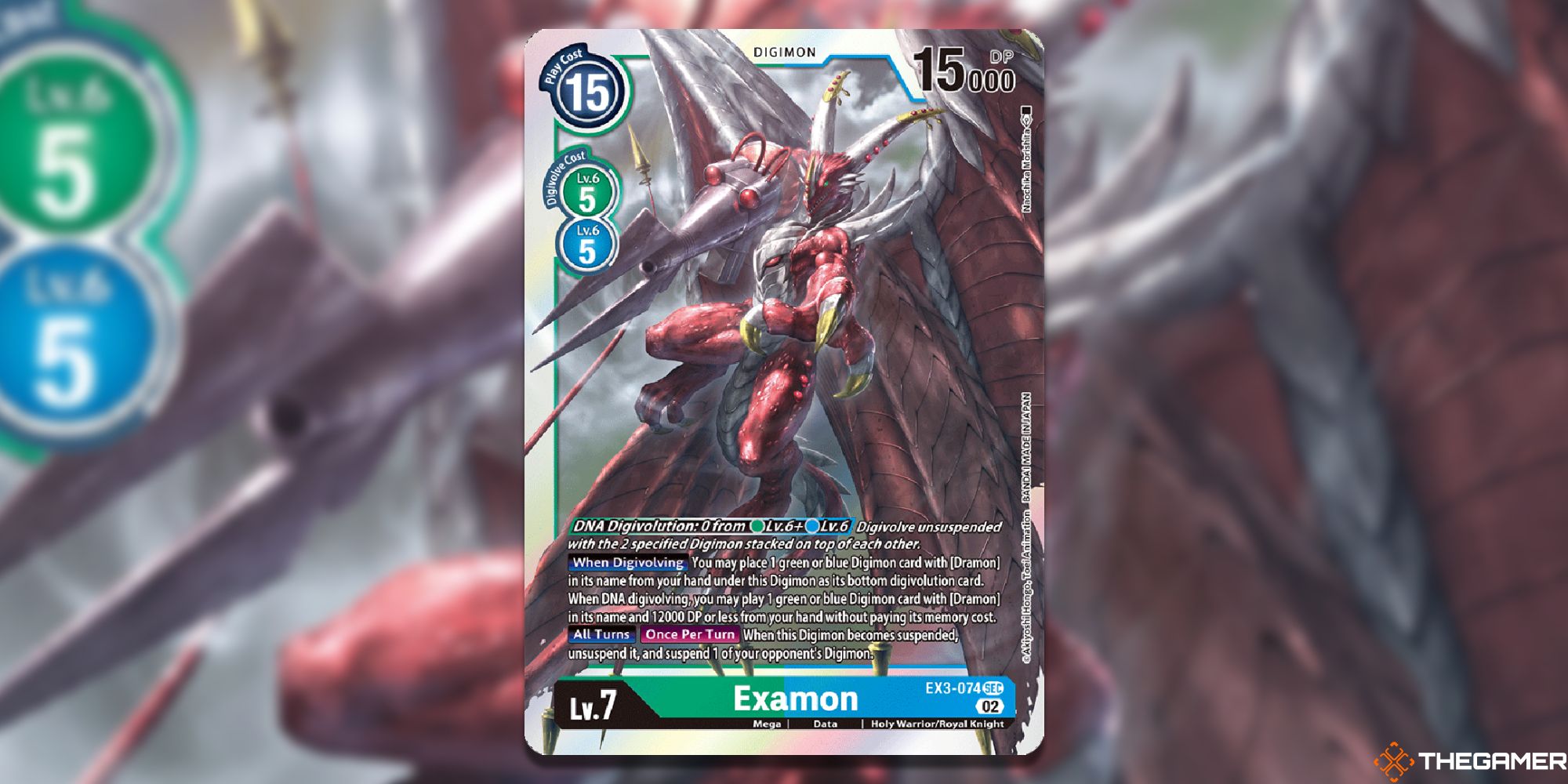 Just like Ordinemon in BT9, Examon is a level seven Digimon that can be DNA Digivolved by using a green level six and a blue level six. While this seems quite costly, Examon's effects make it very worth the trouble.

Not only can Examon suspend one of your opponent's Digimon when suspending, but when it is DNA Digivolved, Examon allows you to play a Digimon with 12,000 DP or less for free. This effect lets you play just about anything short of another Examon, but using this effect in tandem with Breakdramon's effects, will allow you to usually trash two cards from your opponent's security while deleting a Digimon as well.