In the Digimon Card Game, purple cards usually have effects that either mill cards from the deck, trash from hand, or recycle stuff from the trash. With the introduction of the Save mechanic, the purple game plan is expanded quite a bit. The new archetype introduced in the BT10 Xros Encounter set, Bagra Army can use their On Deletion effects and the Save mechanic to stack Digimon with powerful inheritable effects.

They can also DigiXros into big boss Digimon, which can overwhelm the opponent with a myriad of control effects like Blocker or even use an effect new to Digimon: trashing cards from the opponent's hand. Although Bagra Army is the newest archetype introduced, Xros Encounter revived older decks with new purple cards from this set. If you are a fan of using your trash as extra resources, then purple is for you. 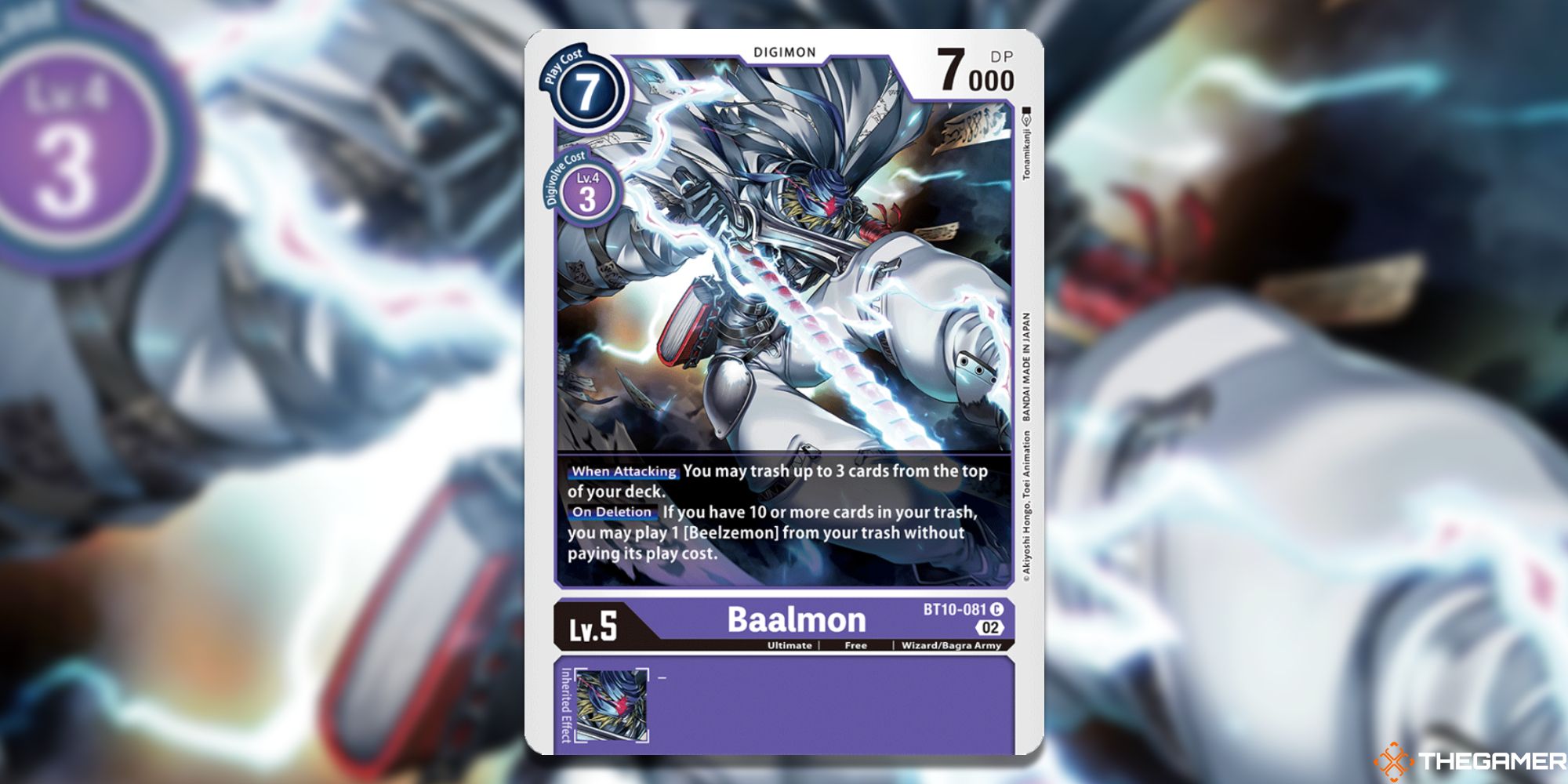 Baalmon is an interesting card. As the first new wave of support for Beelzemon decks, Baalmon speeds up the process of milling your entire deck to trigger all the effects that Beelzemon has. The great thing about Baalmon is that the milling effect triggers when attacking, rather than when Digivolving like most of the cards in the past, such as EX1 LadyDevimon or BT8 Skullsatamon.

This helps you get more value out of Baalmon. You can attack and potentially delete another Digimon, chipping away at the opponent's Security, and playing a Beelzemon from the trash for free whenever Baalmon is deleted. 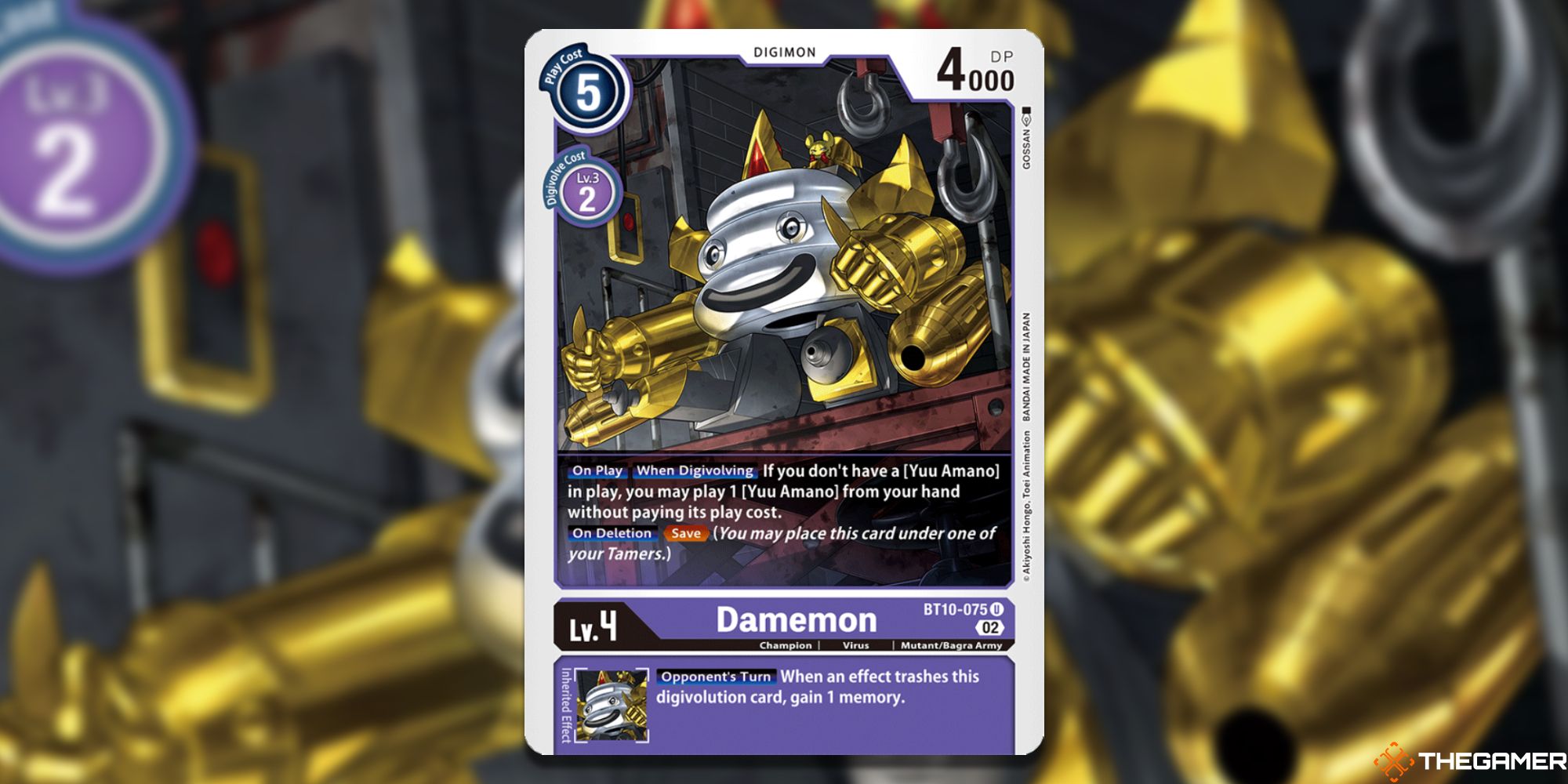 To the untrained eye, Damemon is simply a giant mech resembling feces, being piloted by a golden mouse, when in reality, Damemon is its own Digimon and the ChuuChuumon is actually his best friend. Digimon lore aside, Damemon is a good card to start your Bagra Army plays.

When playing Damemon, you can play the Tamer card, Yuu Amano, for free. One of the biggest problems in purple is the amount of setup that it takes to get the deck to trigger any effects. With the help of Damemon, this can be sped up a turn or two. 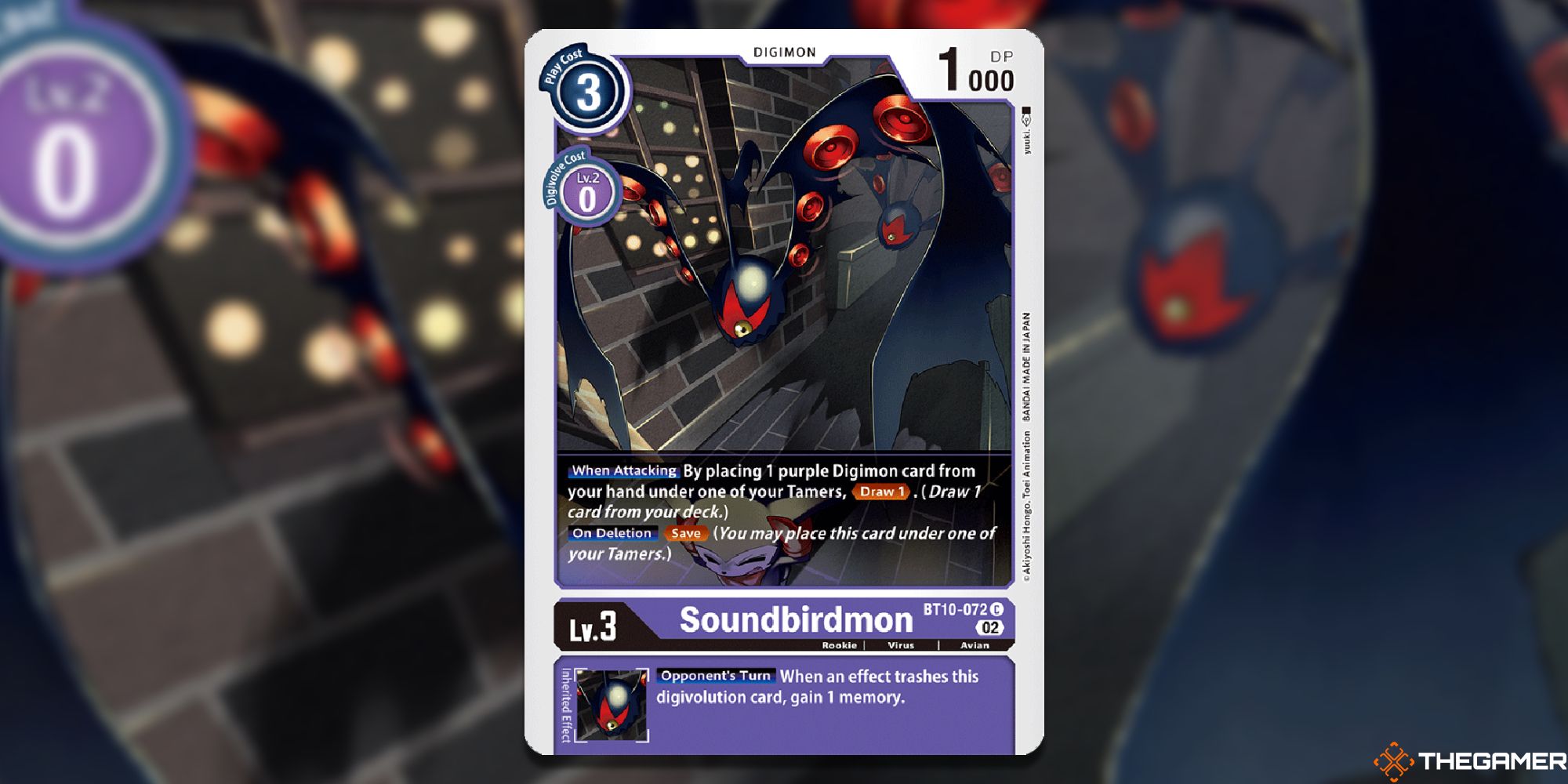 Who doesn't like drawing cards? Soundbirdmon is a nice addition to the Bagra Army deck. Not only does Soundbirdmon's effect trigger when attacking, but it lets you place a card underneath a Tamer to draw one more card from your deck.

In the Bagra Army deck, the Tamer you'll usually be placing those cards under is Yuu Amano, and when you place a card underneath Yuu, you get to draw a card. Soundbirdmon is quite literally Pot of Green on legs. Or wings? 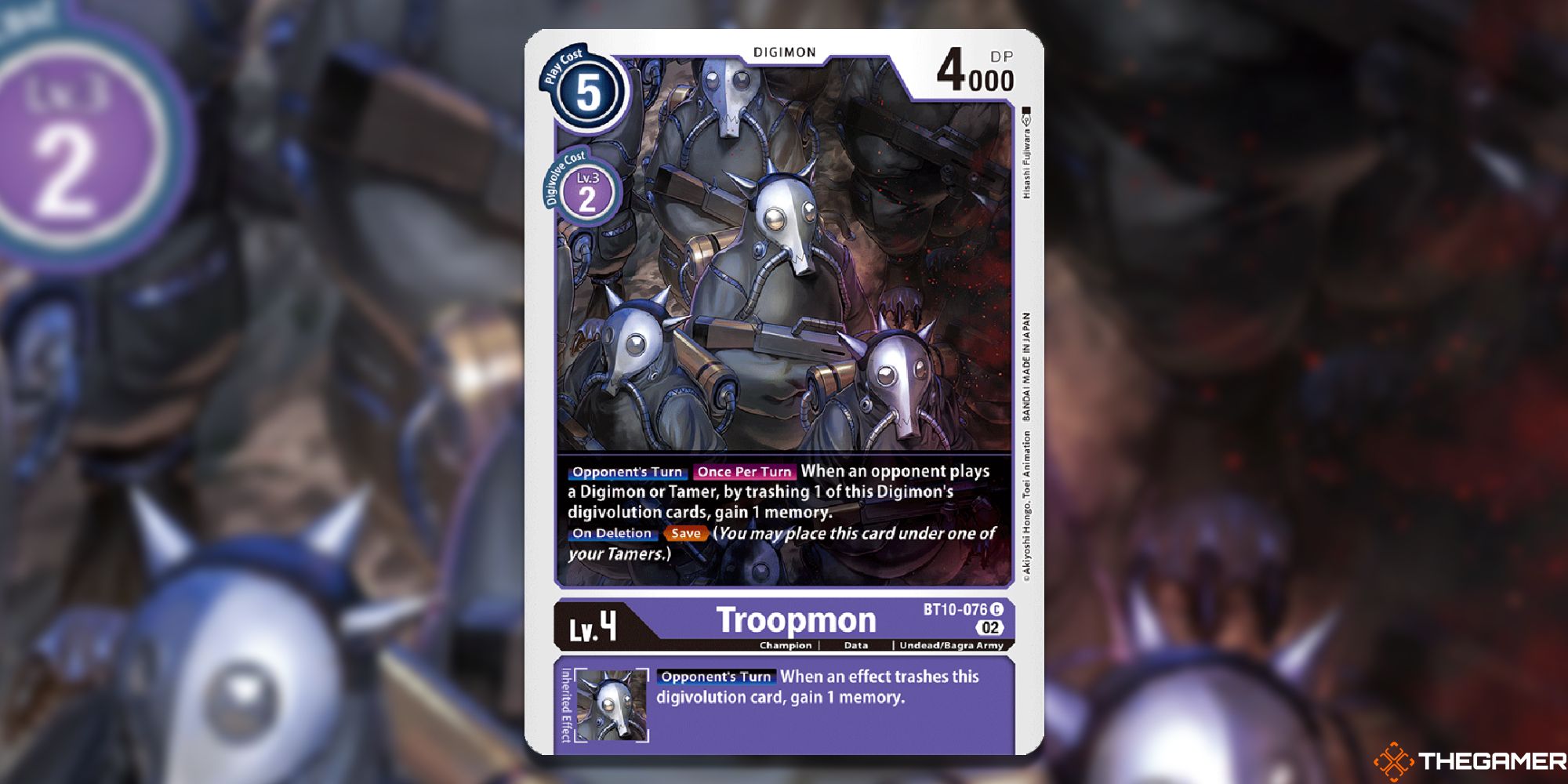 Walking floodgates are slowly becoming more common in the Digimon Card Game. This is generally a good thing because Digimon can usually be interacted with as opposed to Tamer cards, or Spell/Trap cards like in Yu-Gi-Oh!.

Troopmon is an interesting card: since it has the Save keyword, the safe bet would be to play aggressively and keep attacking to quickly end the game, but Troopmon's biggest boon to the Bagra Army strategy is that while it is in the Battle Area, if your opponent plays a Digimon, you can trash a Digivolution card from underneath it and gain one memory. This could set the opponent back or even pass the turn over. 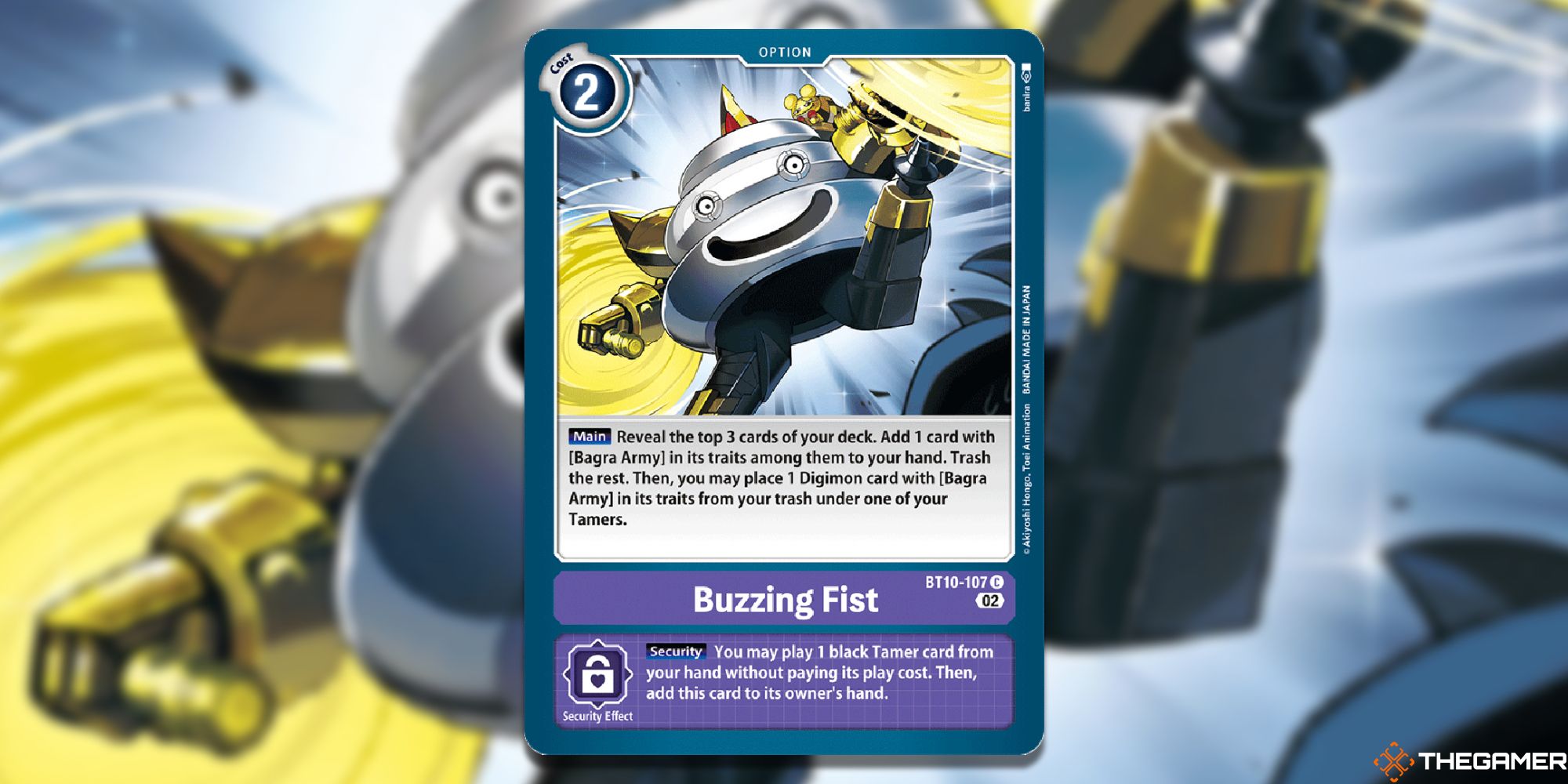 Cheap search cards are the best. With Buzzing Fist you can search the top three cards of your deck for just about any piece you might need. That includes Yuu Amano since he has Bagra Army in its traits and Buzzing Fist doesn't specify a Digimon card.

What you would hope happens is that Buzzing Fist is checked in Security since you get to add it to your hand and play a Yuu Amano already in your hand for free. 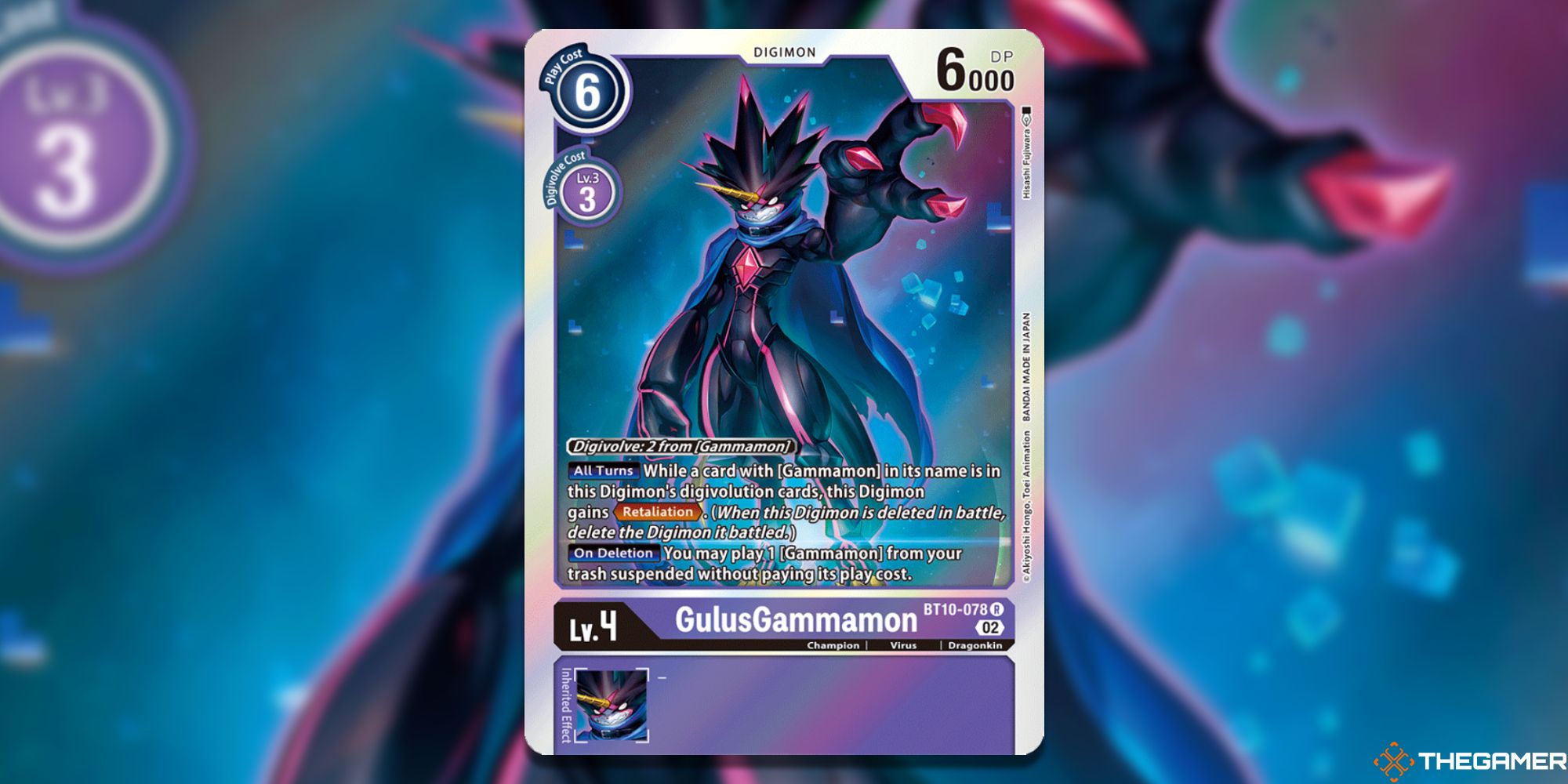 Retaliation has never been a threat in the Digimon Card Game, but slapping the keyword on a card that recycles its Digivolution sources is incredible. GulusGammamon can play a Gammamon from the trash once it is deleted, taking one Digimon with him for his troubles.

This is a frustrating card to deal with because you'll have to use bigger removal cards to get around its Retaliation, and using Cocytus Breath on a Champion is never going to feel good. 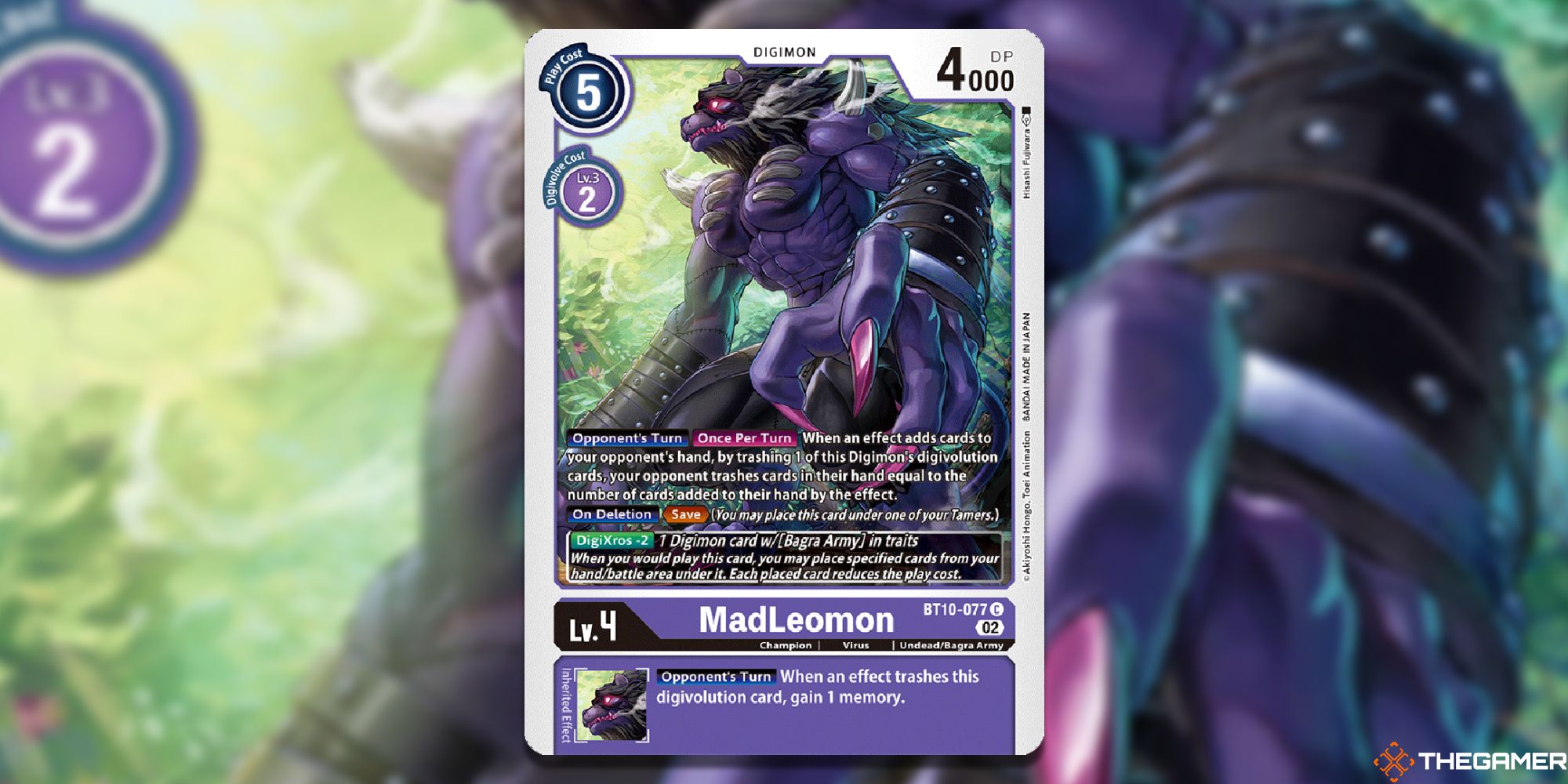 Unlike Yu-Gi-Oh! where Card Destruction was in the very first starter deck, trashing cards from your opponent's hands wasn't in the Digimon Card Game until fairly recently. MadLeomon is a good example of this effect. New effect and new mechanics in one card.

You can DigiXros with a Bagra Army Digimon to play MadLeomon for three memory, and every time your opponent adds a card to their hand, you can trash a source from MadLeomon to force them to trash a card. It makes the gameplay very different from before since most decks in the game want to keep cards in hand and don't really have ways to bring them back once they have been trashed. 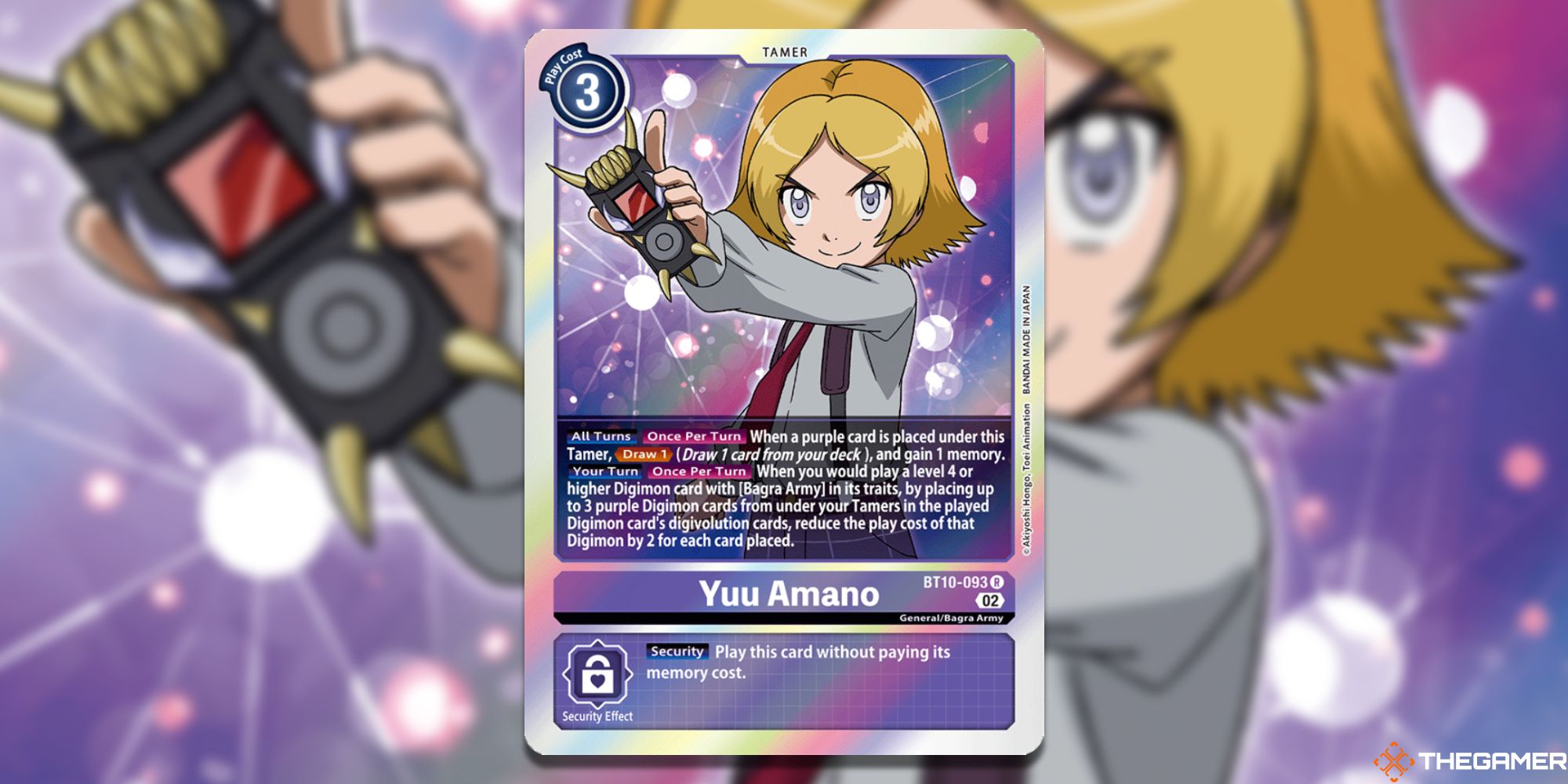 Although Bagra Army is not as good as other decks in the format, like Xros Heart and Jesmon, the deck stays competitive with the help of Yuu Amano. His ability to reuse Digimon that have been deleted already, and stored with the Save mechanic, to reduce the play cost of your level four or higher Digimon is extremely strong.

Setting up difficult-to-deal-with floodgates like MadLeomon or Troopmon, or even going for game-winning blows with Blastmon for free or for a very small amount of memory, is something not every deck can do. 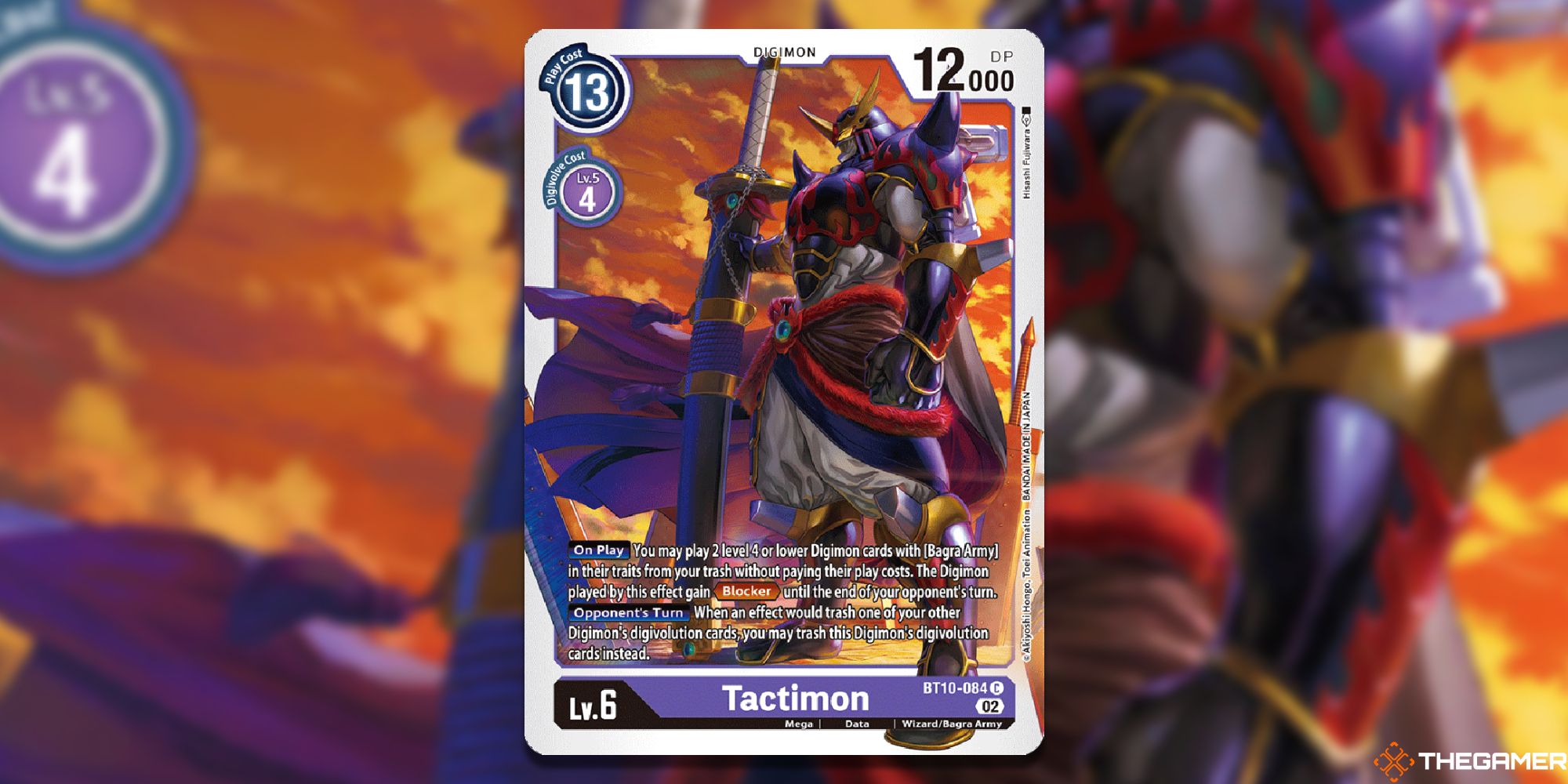 Tactimon might seem like a situational card with a great match-up against Blue Hybrid and Blue Flare decks, but it is quite useful in all the other matches. It creates a strong, defensive wall by playing two Digimon from the trash and giving them Blocker, protecting your Security cards from damage.

The amount of good Champion-level Digimon in the game is outstanding, but the biggest targets for Tactimon's effect will most of the time be MadLeomon and Troopmon. Not to mention that if you have multiple Yuu Amano in play with cards underneath them, you can also add those extra cards under Troopmon and MadLeomon to make them even more powerful. 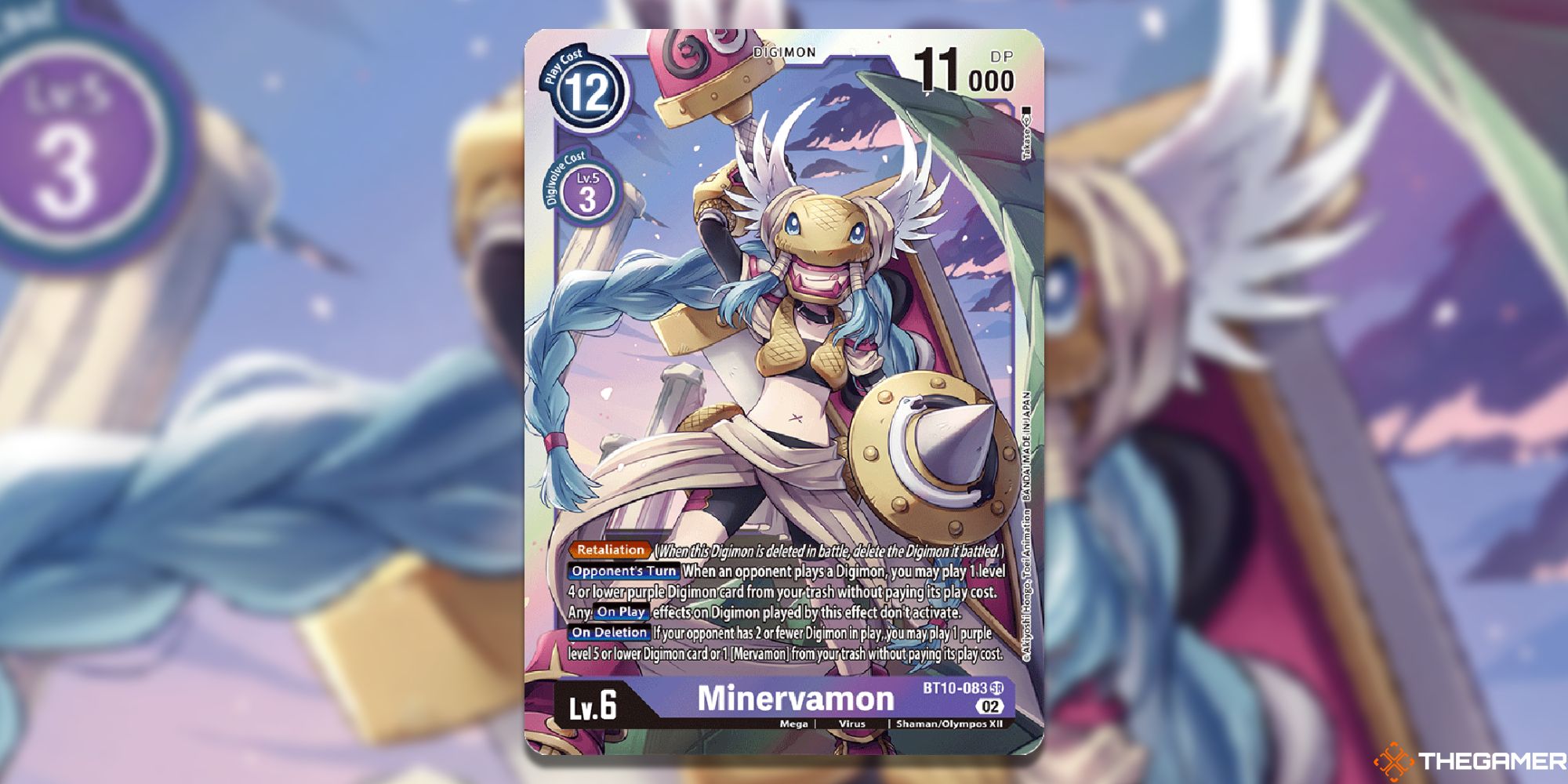 Weirdly enough, the strongest purple card in the set is not a Bagra Army card. Minervamon revives an old deck in a pesky way. With Minervamon, loop decks are back in style.

Since Minervamon's On Deletion effect lets you play a level five Digimon from the trash, you can loop Cerberusmon and Cerberusmon: Werewolf Mode by deleting each other and gaining five memory more than what you started with. It's a powerful loop combo since it's not a hard once-per-turn effect, but it does take quite a bit to set up.