Equal parts enchanting fairy tale and intrepid adventure, Disney Dreamlight Valley really has something for everyone. Your inner child will never be happier than when you're traversing the beautiful biomes of Dreamlight Valley, a host of friendly faces keeping step beside you.

If you've already had a swan about this sleepy land, struggling under the thrall of The Forgetting, you'll know that there are some things you just cannot help doing. You know it's childish, and you know that you've probably got other things to be getting on with, but here are ten things every Dreamlight Valley player has done.

10 Get Rid Of Those Night Thorns ASAP 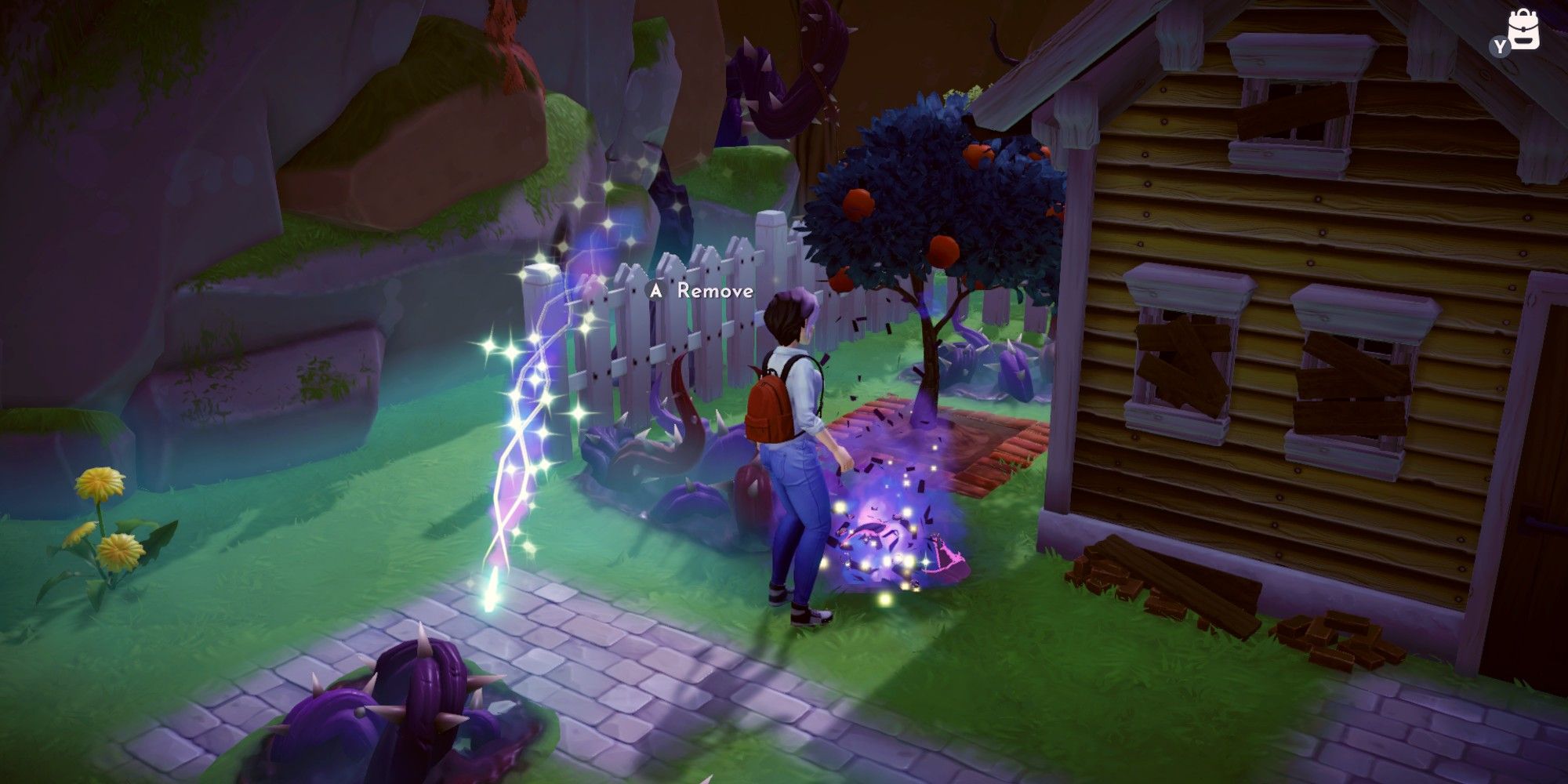 As soon as Merlin set you on your merry way to rid the town of Night Thorns, you went out the door of that ramshackle hut masquerading as your home and you removed those pesky Night Thorns with welcomed gusto. Remove thorn, grab coin, remove thorn, grab seeds — you were under a spell entirely of its own accord, lured by the delightful purple puffs of smoke.

You bid those vines adieu, and reaped the many (many) rewards for doing so. However, you may or may not now have a deeply visceral reaction to seeing thorns of any kind, including the ones adorning your mother's new vase of roses. Must. Remove. ALL.

9 Spend Way Too Long On Your Avatar And Home Decor 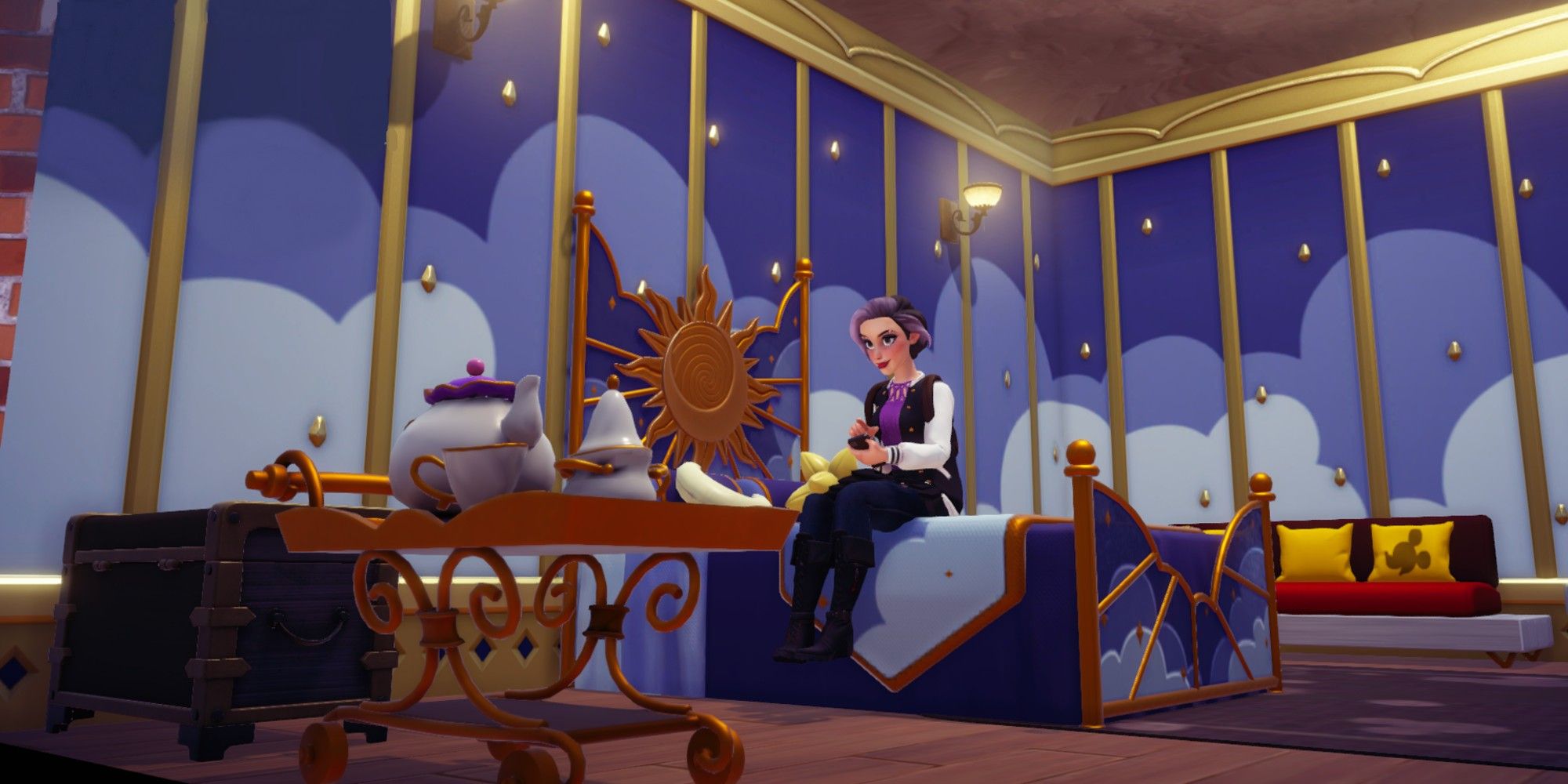 We are a generation of Simmers, and it shows. Expanding and decorating that ramshackle hut is one of your greatest joys, as is changing your outfits daily (heck, maybe hourly) — all in the name of some sweet, sweet Daily Dreamlight. You've twirled about in gowns, sashayed in combat boots, and you've definitely equipped that little Minnie Mouse backpack.

Your finest moment was layering up your jeans and a pleated skirt in a 2005 throwback, dedicating the look to those red carpet crimes against fashion committed by all your Disney Channel favs during the Teen Choice Awards. Whatever your style in the Valley, you took far too long deciding what to wear in those opening moments of the game. You'd revel in every chance to do it all over again.

8 Try To Shove Maui Off The Cliff 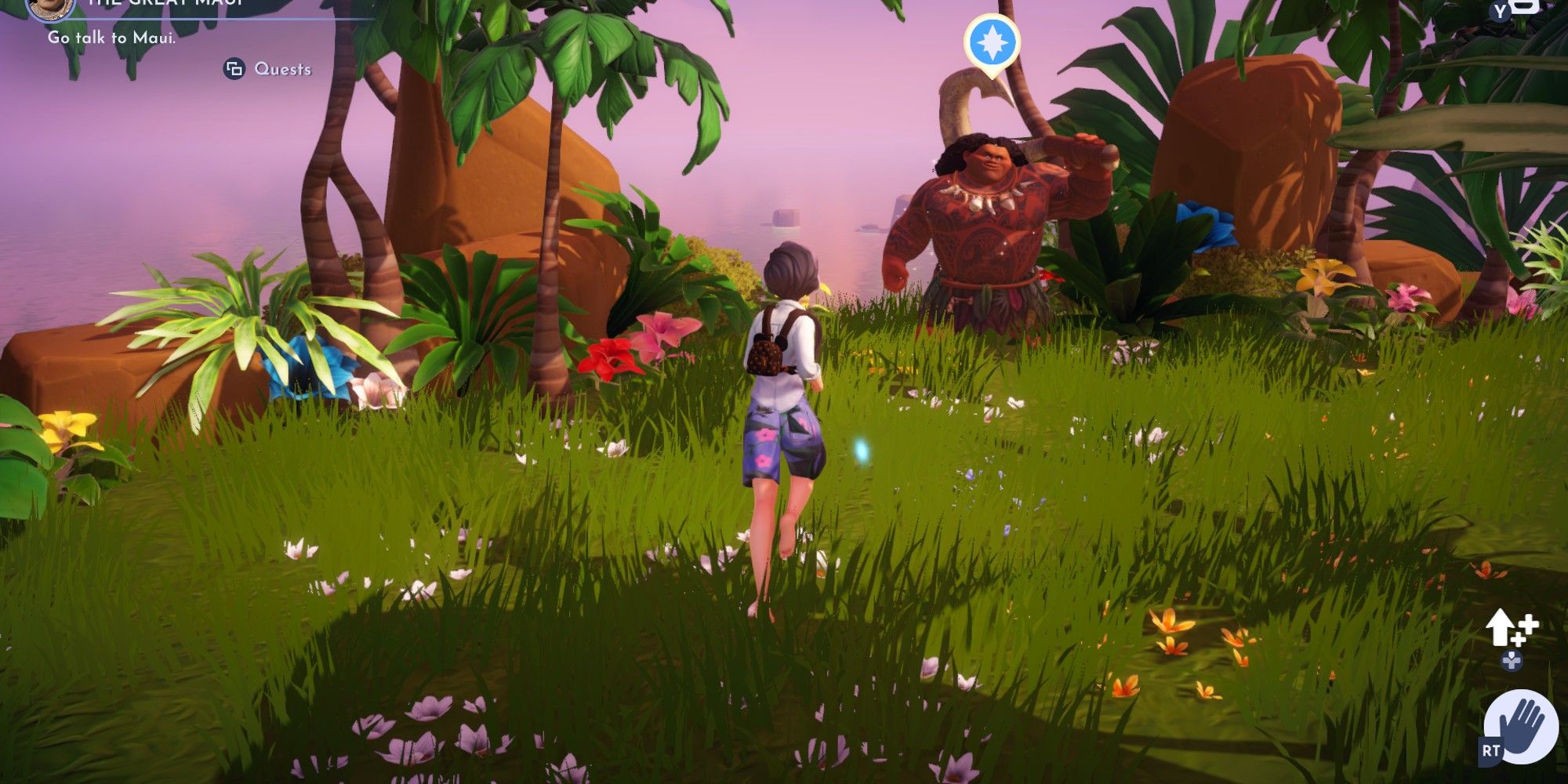 Don't tell me you saw the way squirrels and turtles simply get shoved aside when you run into them, then didn't try to replicate it on the larger characters, too. The most tempting of subjects is Maui, of course, who stands on the edge of a cliff like a proud, barrel-chested slab of earth.

A sentient barrel-chested slab of earth that, perhaps if someone ran into it at full speed, might go tumbling over the edge for a much-needed dip below the salty waves. Sadly, the invisible walls surrounding the island are keeping Maui safe and secure on his cliff. Not that this will stop you from pushing him around the rest of the island.

7 Live On Fruit (Even Though You Can Cook) 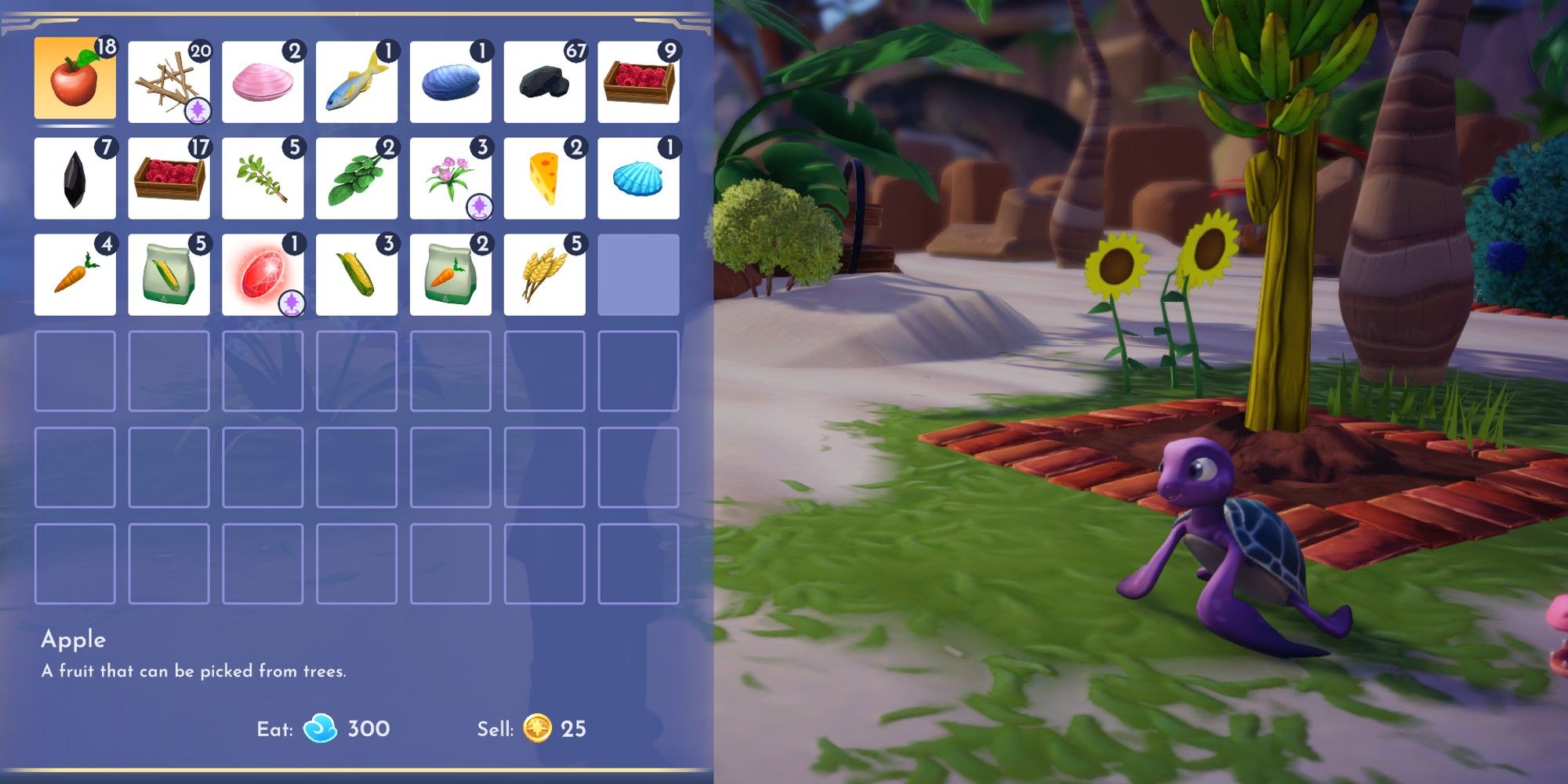 Look, here's the deal. We know you. You're lazy in real life, regularly opting for a Deliveroo takeout rather than chucking some pasta into boiling water. The same is true for your avatar in Dreamlight Valley. Even though you have ready access to recipes, ingredients, and your very own stove, you would rather forage for berries and apples and snarf those down instead.

Are you a squirrel? Are you a vegetarian? Are you just very, very lazy? One thing is for sure — you're hardly ever bothered to rustle up anything fancier than a fruit salad unless a quest calls for it. Why cook when you can sell those fish for 800 coins apiece, right?

6 Have A Fishing Problem 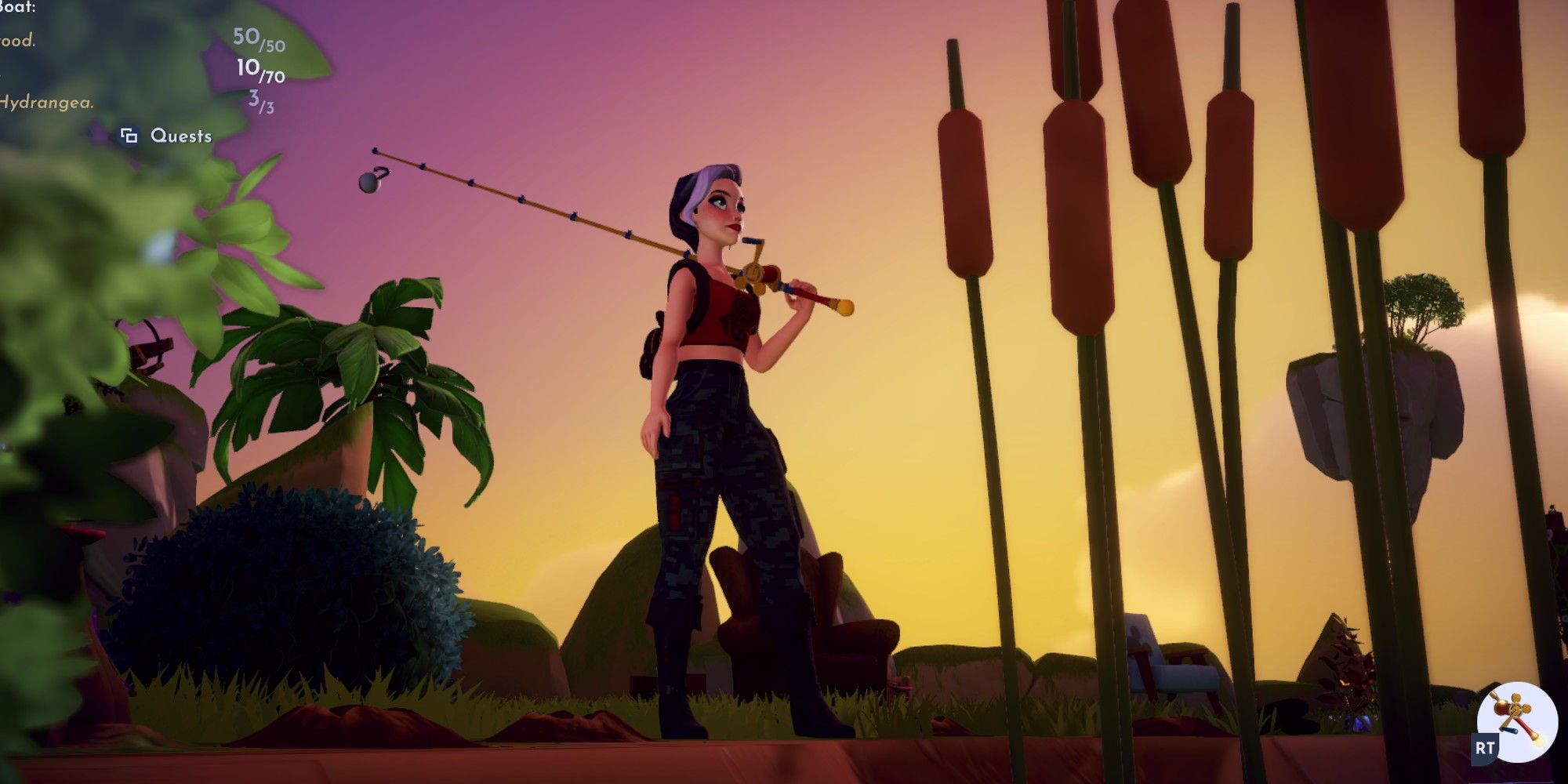 This is a safe space. You can be honest here. We know that you spend more time fishing in this game than pretty much anything else, except perhaps mining for crystals that never seem to spawn when you need them.

As in all games that offer a fishing simulation of sorts, there is something incredibly peaceful about the repetitive nature of these sections. Waiting for the ripples to settle and alert you that you've caught something, you find a rare moment to sit and ponder life's great questions. Namely, "why am I playing a U-rated game that makes me feel complex emotions?"

5 Have A Favourite Character Already Chosen 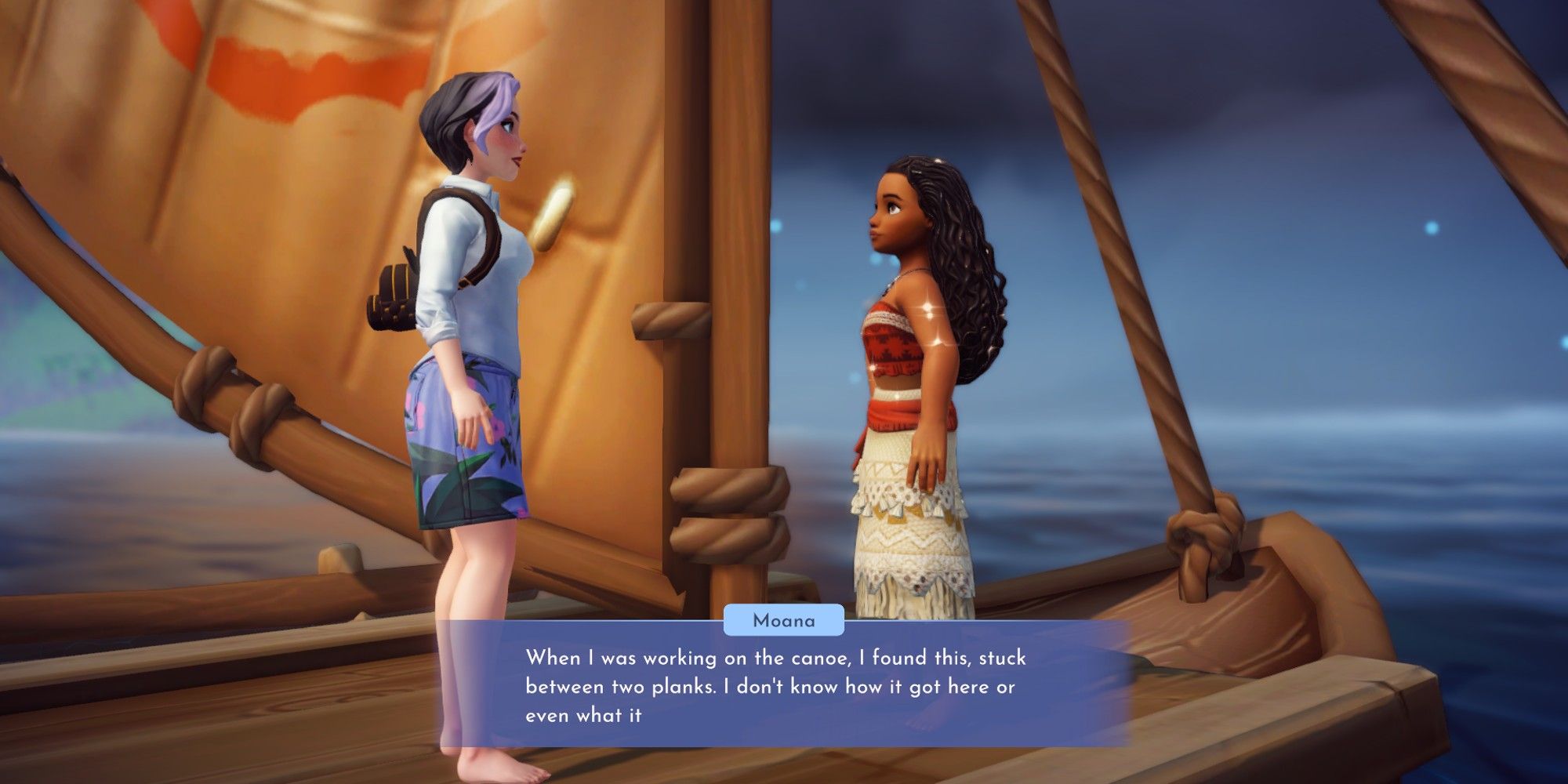 It's been a while since someone judged you for your taste in Disney characters, but you'll be damned if you let yourself feel one modicum of shame for making a beeline to the doors and sections that you just know are keeping you separated from your favourites.

Perhaps your icy heart beats only for Elsa, or maybe you think Wall-E is the most underrated Disney hero of all time. Either way, your reunion with your beloved characters will only be scuppered by the amount of Dreamlight you have in hand, so grinding for it has become your daily ritual. Don't worry though — you're already a good eight hours into the game. You're bound to see Ariel soon…right? 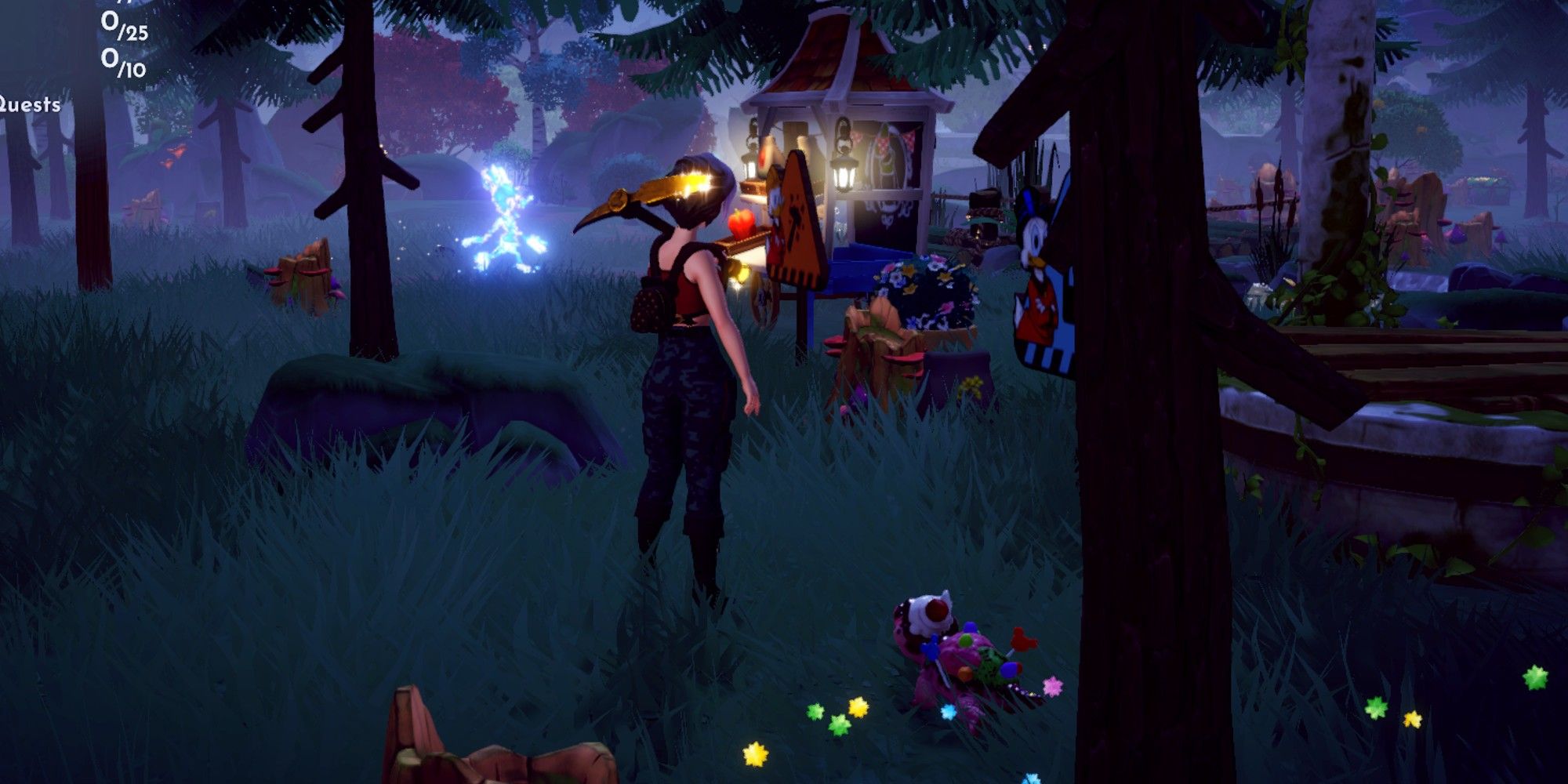 No spoilers or anything, but your heart definitely broke a little bit hearing how crushed Mickey was about his beloved Minnie vanishing. Mickey and Minnie were never even all that in your books, but yet here you are: shedding a silent tear and watching as Minnie's spooky, shimmering form glints through the trees in the Forest of Valor.

She always dissolves before you can get too close, making her appearances truly unique in how fleeting they are. There are myriad mysteries to uncover in Dreamlight Valley, but you're hoping that Minnie's is one that will be solved soon — because it's just too upsetting. 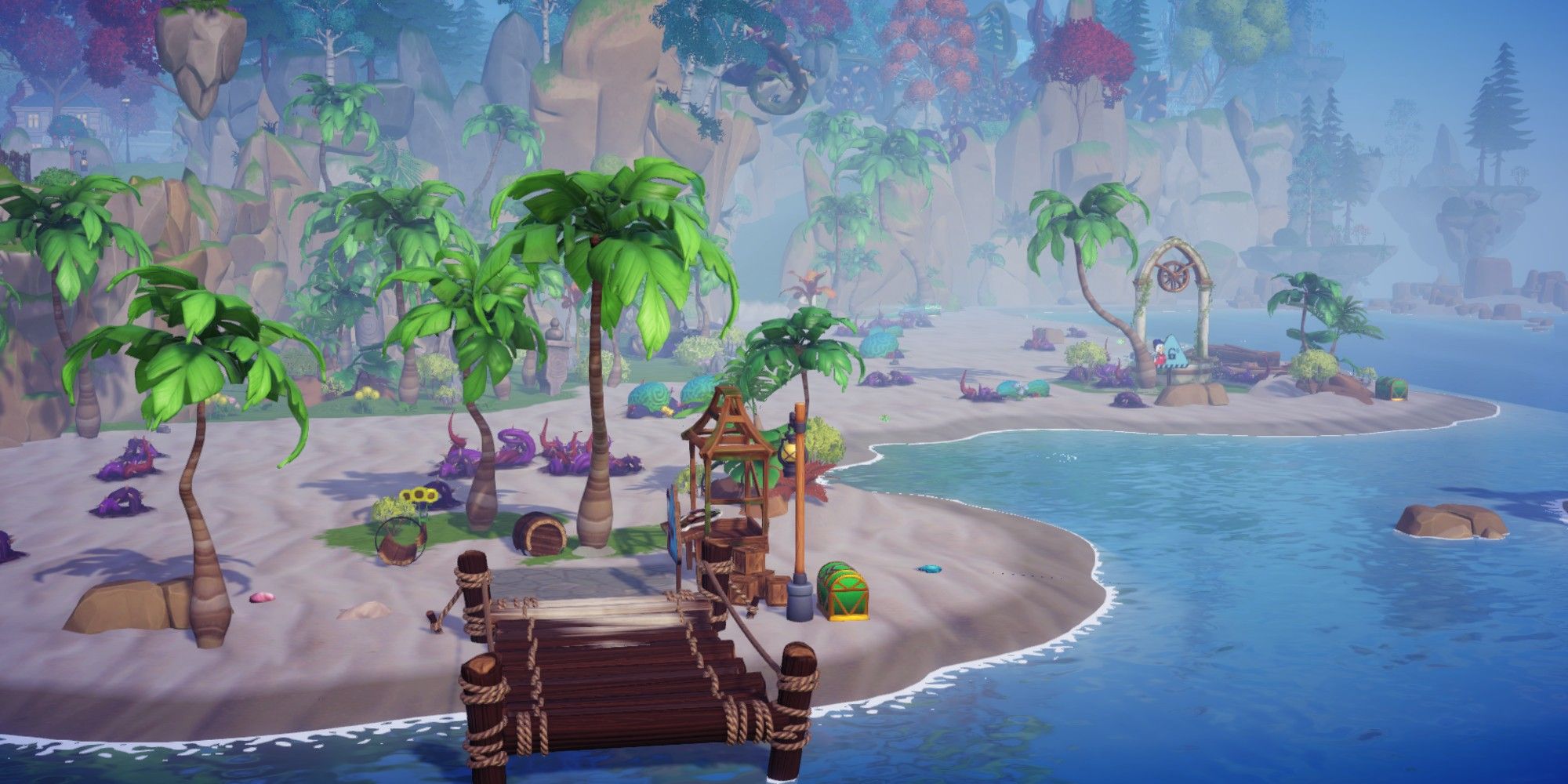 Unlocking the beach is one of the coolest moments in the early stages of the game. And what do they have on beaches? Water. Sadly, water is one of the few things in Dreamlight Valley you're not able to interact with, no matter how much you run at that invisible wall.

Once you unlocked Dazzle Beach, you were finally able to meet your hero Ursula, collect coconuts, and unlock the mysteries of a mystical and winding cave — but you also found that you couldn't take a dip to save your life. It's okay, Dreamlight Valley isn't about combat, so it's just as well that your life doesn't need saving! Phew. 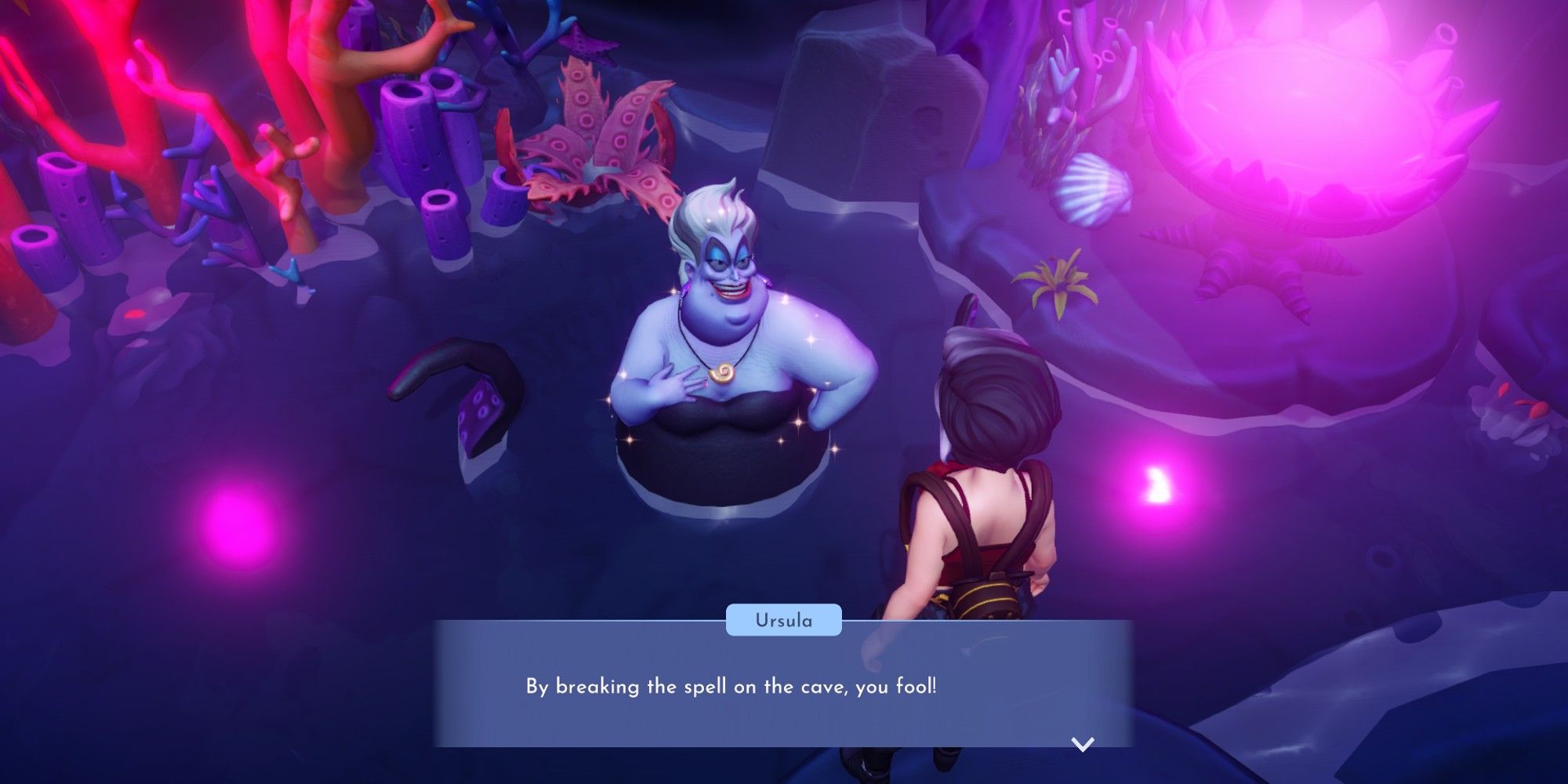 Ursula the Sea Witch is an evil, twisted, monstrous villain whose trickery and treachery are infamous. In short, she's your hero. Upon entering the cursed cave and encountering Ursula for the first time, you decided then and there that if there's an option to go rogue in this game, you are going to take it.

You chose all the positive, enthusiastic responses during your discussions, and even tried to go back in the middle of your mission to see if you could level up your friendship yet (hint: you couldn't). Ursula is the coolest character in the game, and you won't be taking questions at this time — or ever, probably. 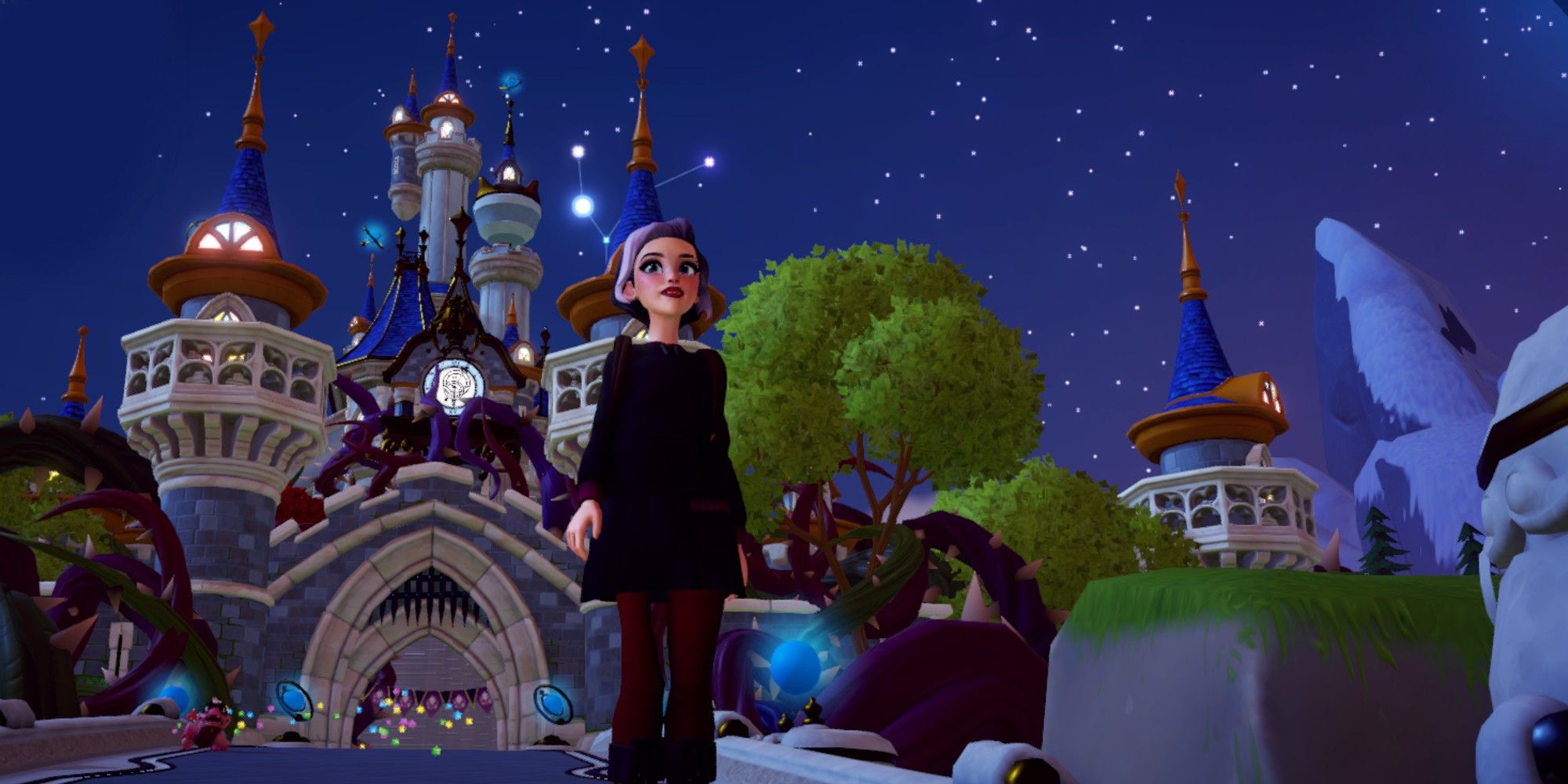 There's nothing quite like the nostalgia hit of Disney Dreamlight Valley. It sounded a little trite on the tin, but at the end of the day, you couldn't be more glad to be here. The soundtrack is a carefully-crafted masterpiece, the visuals leave you frequently agape, and you come away from each session believing just that much more in the power of magic.

The game has reignited that childlike wonder in us all; something that you, just like your friends in Dreamlight Valley, might have forgotten somewhere along the way.