Espeon is coming to Pokemon Unite in a little under a week, which is a sentence that might confuse you if you’ve seen the Pokemon in your games already. Like previous Unite Licenses for Greedent, Tsareena, and Hoopa, Espeon’s license will be available for free once you complete its in-game mission. The math works out that you can unlock Espeon six days from now with as little as 15 minutes of play time per day, but if that’s too much to ask, you can unlock it right now for 575 gems, or roughly $10. I don’t think you should do that for obvious reasons, but I also don’t think it’s right for TiMi Studio Group to even offer it as an option – especially when Espeon can’t be purchased with earned Aeos Coins.

Look, I’m not your dad obviously, you can spend your money however you want. If seeing YouTubers and guide writers play with Espeon makes you so jealous that you just can’t wait, by all means, drop the gems now and have fun. You don’t have to explain yourself to me.

I am concerned, however, with TiMi’s rollout of Espeon and what it could mean for the future of Unite. Espeon is the first character that can’t be purchased for Aeos coins, and there’s no indication that this will change once the event ends. It’s possible that once this Unite Battle Committee Special Mission ends, Espeon will only be available for gems. It’s easy to dismiss complaints about the price right now while it can be earned, but what does it say to people who missed the chance? “Sorry, you should have been playing consistently in May 2022, now you have to pay up.” 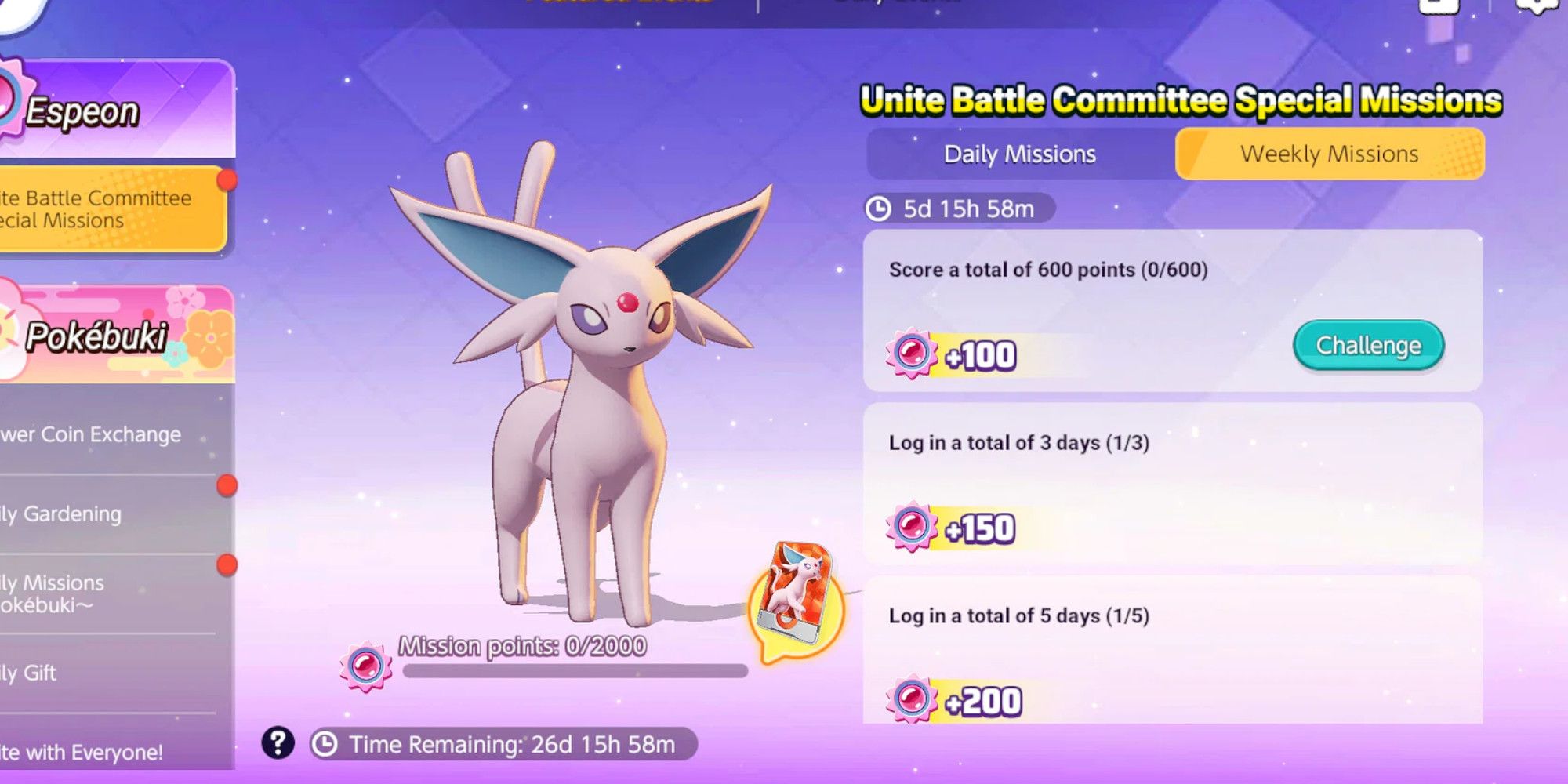 And by ‘consistently’, I do mean every day. It’s easy enough to earn Espeon in the first six days, but if you can’t manage to finish off those weekly log-in challenges you’re quickly going to fall behind, even if you end up playing more days total. Say, for example, you play three games a day, three days a week, for three weeks. That’s nine days played, but you’ll only have earned 1,100 points – just half of what you need to unlock Espeon. If you’re only logging in semi-regularly – even multiple times a week – you might not even earn enough points to get Espeon for free.

Ultimately, it is free and you can earn it, which makes it hard to complain about the purchase options – but that may just be the entire point. We’ve already seen the average price of Unite Licenses increase over the last year to the point where every new Pokemon invariably costs 10,000 Aeos coins. Now we’re seeing Pokemon that can only be purchased with gems. This is a trend we should be concerned about.

TiMi Studio Groups’ other mobile/Switch MOBA, Arena of Valor, has a similar style of early access rollout for new heroes. Luckily there aren’t any heroes that are permanently gem-only (or ticket only, in AoV terms), which is a good indication the Unite won’t stoop to that level. Still, the best way to ensure that never happens is still the most obvious: don’t pay for the weird early access to Espeon.