$429 is a lot of money. You can buy eight copies of Pokemon Scarlet or Violet for that and have enough change to grab a Nintendo Switch Online subscription to play with your friends. You could eat a recommended portion of Ben & Jerry’s every day for a year. You’re not far off affording an Xbox Series X. Or you could buy Elden Ring: The Board Game.

I’d be remiss not to mention the other options – you can get smaller offerings for less money, but they’re not the full package. For a more reasonable $89, you can explore The Weeping Peninsula, which works standalone or as an expansion to the base game, and should last for about 20 hours. For $179, you can get the Realm of the Grafted King core box. This has twice as much stuff in it – I’ll explain the minutiae of that stuff later – and comes with the bonus of an Iron Fist Alexander model.

Then you get the big boy. Sign up to the All-In pledge on Kickstarter and you’ll get the lot. Both expansions, 104 miniatures, over 2,500 Cards, over 150 modular hex tiles, over 500 tokens, 12 scenario books, five rulebooks, and 12 Tarnished dashboards. Oh, and that only covers Limgrave, the other locations are coming in future Kickstarters. You probably won’t use all of these in one 90-hour game, but the point is that it’s replayable. If you like setting up literal thousands of cards and tiles, then you’re in luck, but Elden Ring is surprisingly easy to learn despite the setup. 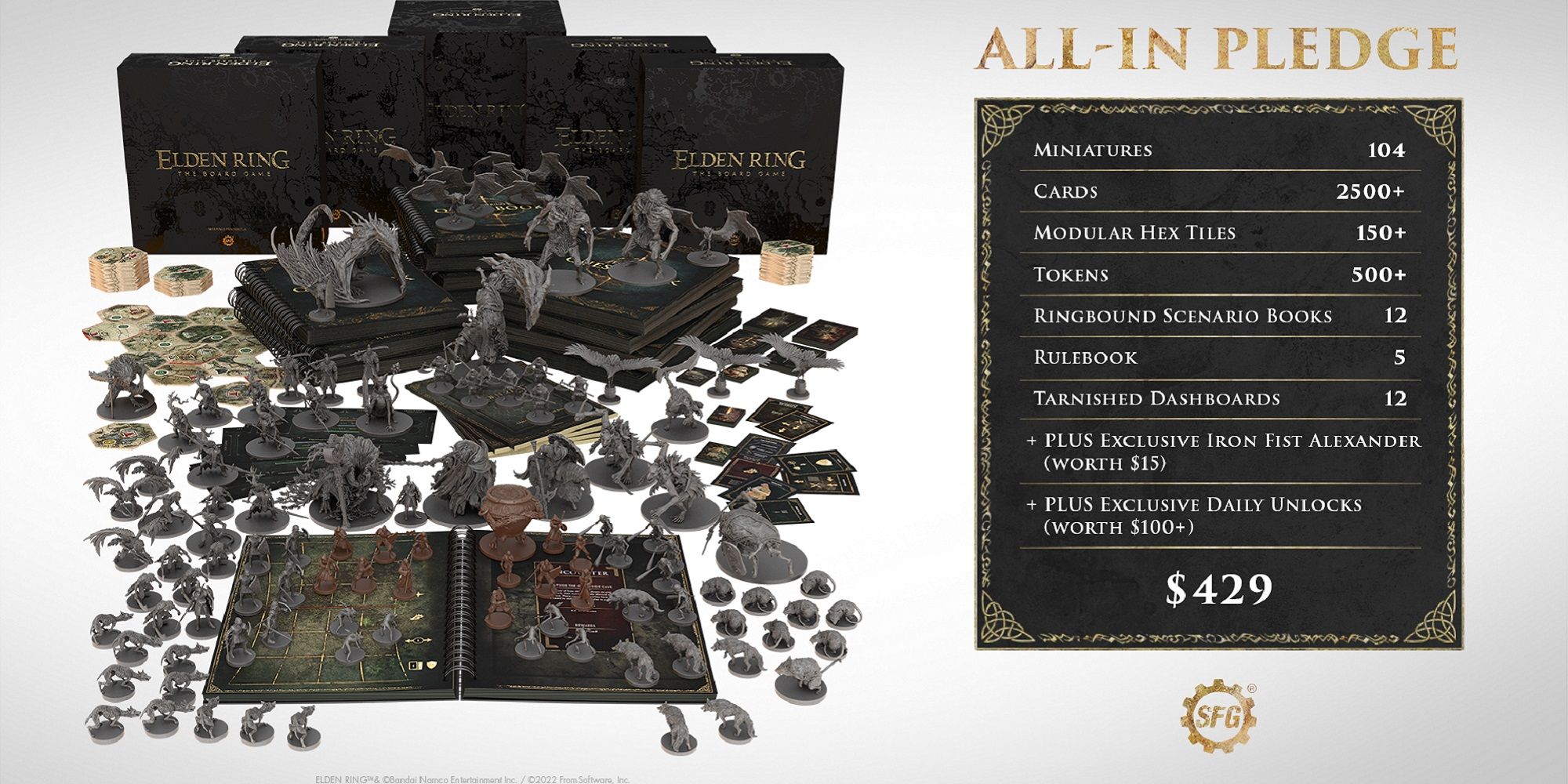 It’s very unhelpful for me to say that playing Elden Ring made it far easier to understand than the gameplay being described to me by the developers. Still, I’ll give it a go. Everything in the game is conducted in three-action turns. On the overworld, you can explore (add new tiles to the board), interact with items, or start fights. You unlock timed quests that guide you to side quests, help you explore, or, ultimately, towards the area boss.

The fights themselves take your Tarnished to another board, made out of one of your rulebooks. On each page is a grid, and you continue your three-action turns over here, facing off against a randomly generated enemy or enemies. This means that, if you choose to head into combat, your friends aren’t waiting hours for it to resolve before they can carry on with their own game. Once your three actions are up and your opposing beasties have hit you back, your friends have their turn again.

Combat itself is a little different from the Dark Souls board game, if you were wondering. The combat board/book has a grid on it, complete with lanes. Moving forward gives you more attack cards but also makes you more vulnerable, staying back allows you to replenish your stamina (represented by your hand). Some attacks only impact your lane, others spread across multiple. You can also see your enemy’s attacks before they commit them, allowing you to plan your approach. The only thing that’s random here is the marching order. Again, this is much more intuitive when you actually play, and surprised me with how much fun it was with such simple rules. Others can join you in combat, if they get there quick enough, and you have to make a unanimous decision to go into a boss fight, as you’ll all be pulled into it. 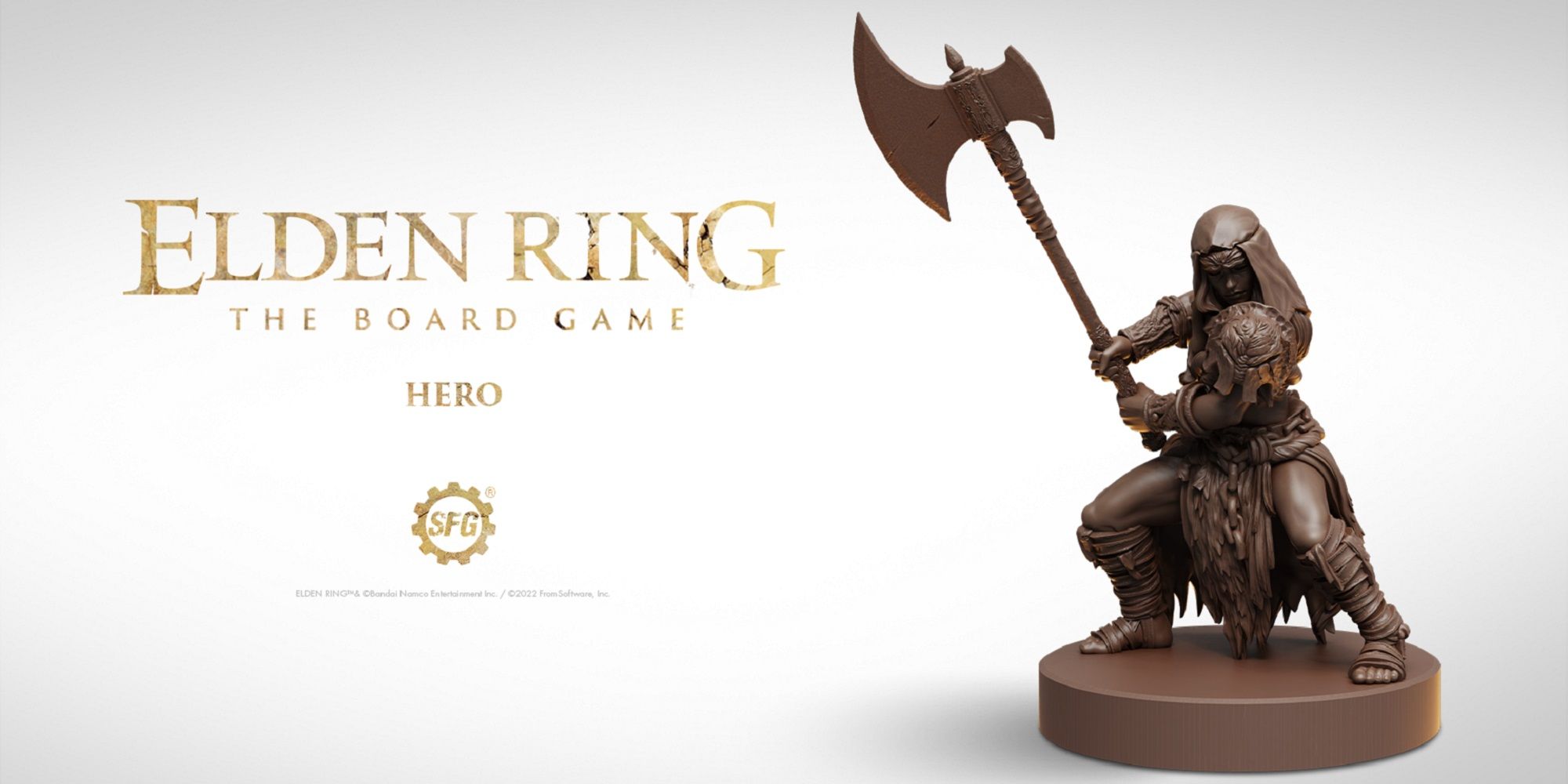 I was told that, despite the long playtimes estimated for the game, quests should help players feel like they’ve completed a section and achieved something in a 90-minute session. I played for 45 minutes and didn’t feel like I’d got anywhere, but that was my first experience, so expect things to go a bit slower while you’re learning the ropes.

Elden Ring is a co-operative game at heart, but the devs say they “fully support” Let Me Solo Her runs. Experience and loot is all shared, and there’s no way to grind enemies until you’re overpowered for the boss; experience is fully telegraphed and you can only level up so many times at the Roundtable Hold in each game.

You can’t talk about a Steamforged game without talking about the models. I got to see a host of the miniatures up close, and the detail is immediately impressive. While the big monsters like Godrick the Grafted and Dragon Agheel will be the centrepieces of the collection, even the Godrick Soldiers and Lone Wolves look great, as do the Tarnished of course. I did notice some spears bending in classic miniature fashion, so you might need to get that hot water out or do some surgery with brass pins. Of those models I didn’t see in person, the Tree Sentinel is the one that I’m most excited to see on the table. 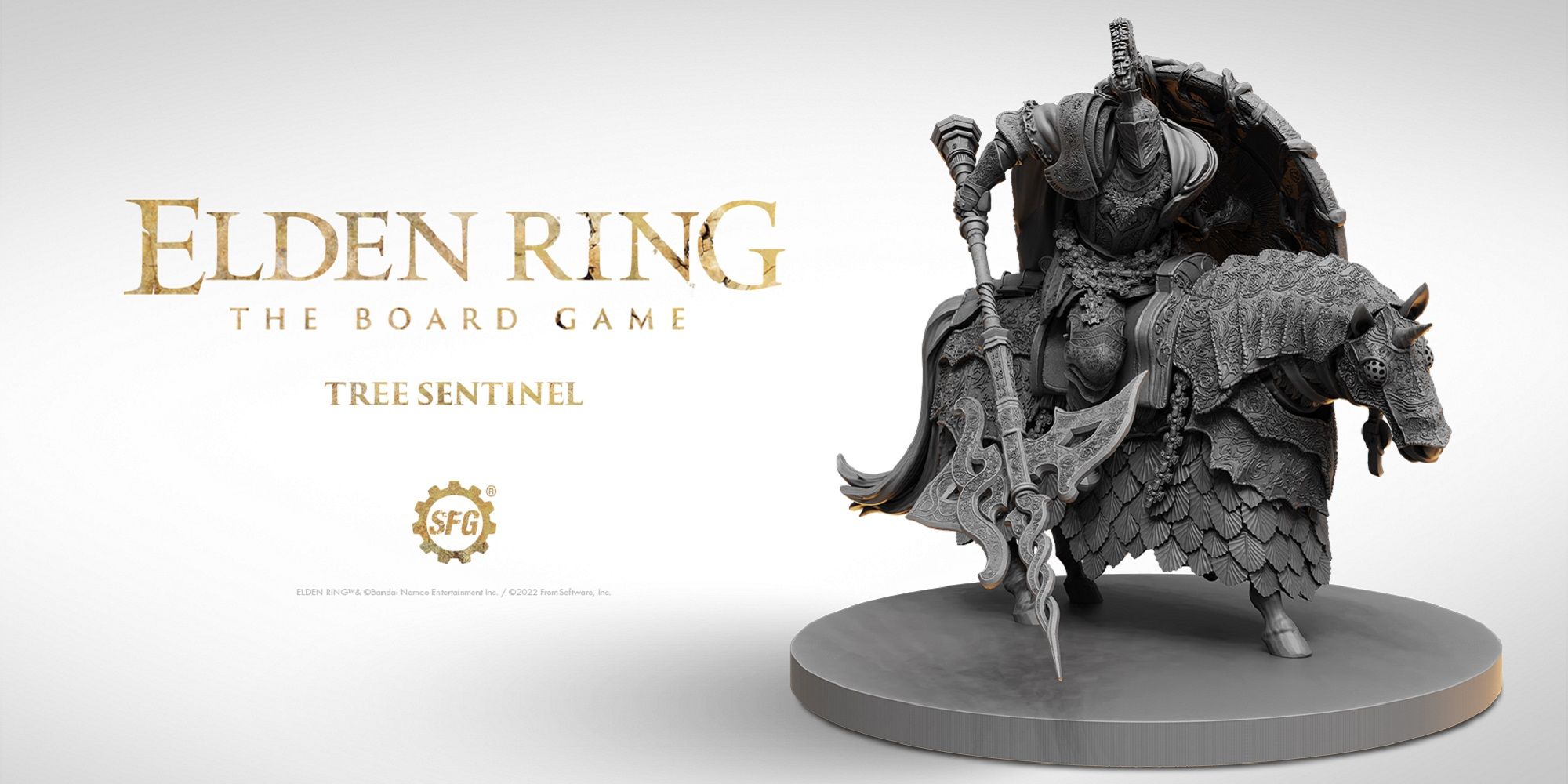 Elden Ring The Board Game is impressive in scale, meticulous in detail, and surprisingly simple to play – despite the thousands of components. That shouldn’t be surprising from a company with as much prestige as Steamforged, and considering they’ve been working on this for three and a half years. Yes, when Elden Ring was just a rumour to the rest of us, the developers were signing their life away in NDAs to get sneak peeks at the game while it was still in development to ensure their board game version was as accurate as possible.

As I mentioned before, future areas of the Lands Between will have their own Kickstarters, but you’ll be able to carry on your story from Limgrave if you wish. New players will also be able to jump into expansions with pre-levelled characters. However, the cost of playing the full Elden Ring experience doesn’t bear thinking about. While Steamforged didn’t say anything about pricing for future expansions, or commit to how many there would be, if it eventually board-gamifies all 10 regions of the Lands Between at the same price as Limgrave, players will be forking out over $4,000. I will reiterate that that is a speculative price and my own estimation, but if you thought you could buy a lot of Ben & Jerry’s for the initial outlay, imagine how much you’d be able to buy if you’re planning to collect the full set.

Elden Ring The Board Game launches on Kickstarter on November 22, and the team estimates that it’ll take around 18 months to deliver.