Element, the company behind an end-to-end encrypted team messaging platform powered by the Matrix protocol, has raised $30 million in a series B round of funding from a slew of notable backers, including Skype cofounder Jaan Tallinn‘s Metaplanet, WordPress.com parent company Automattic, Protocol Labs, and Notion.

This week also saw Salesforce officially taking Slack under its wing. The gargantuan $27.7 billion acquisition serves as a timely reminder of the importance that team chat and collaboration tools play in a world that has rapidly embraced remote work. In tandem, open source software is infiltrating just about every nook and cranny of the business world, a combination that puts four-year Element in a strong position.

London-based Element develops an open source messaging client on top of Matrix, a decentralized open standards-based communication protocol created inside Amdocs by Matthew Hodgson and Amandine Le Pape in 2014. The duo departed Amdocs in 2017 to focus entirely on growing and commercializing Matrix, first through a company called New Vector, which developed a Matrix hosting service and a cross-platform Slack alternative called Riot. In 2018, the Matrix.org Foundation came into being to cement Matrix’s development as a neutral not-for-profit entity, while last year Hodgson and Le Pape rebranded both New Vector and the Riot app as Element. 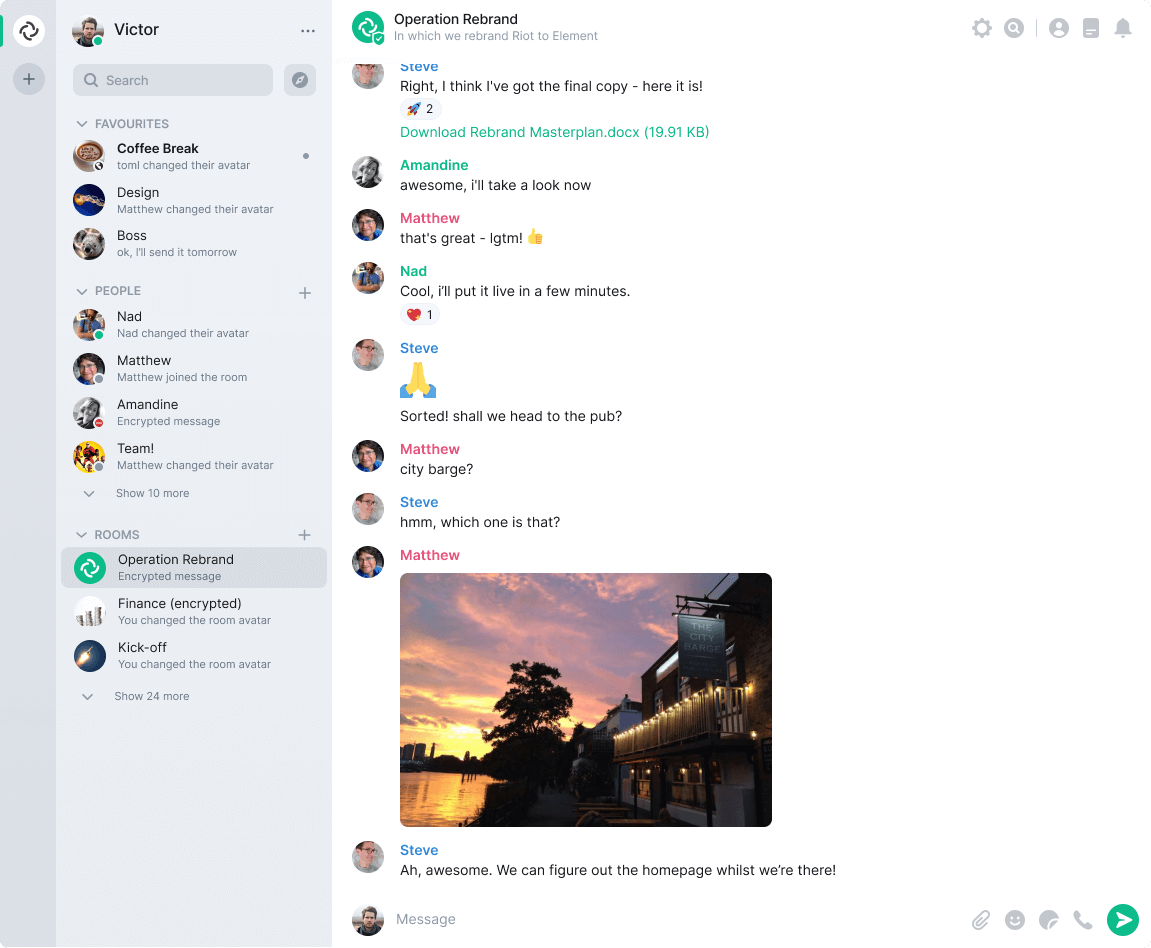 Above: Element: An instant message app built on Matrix

So what exactly is Matrix, and how is Element looking to capitalize on it?

Matrix can perhaps best be compared to something like a telephone network or email, insofar as it’s an interoperable communication system that doesn’t lock people into a closed ecosystem. With email, you can send a message to another person regardless of what service provider or client (app) they’re using — Yahoo, Gmail, Outlook, and ProtonMail users can all message each other just fine. The Matrix protocol is striving to achieve a similar goal, but with modern internet-based messaging in its crosshairs — in a Matrix world, WhatsApp users can easily communicate with Slack and Skype users.

Because Element is built on Matrix, it essentially serves as a catalyst for the growth of the broader Matrix network. Anyone using Element is participating in an open and global network of tens of millions of users, spread across thousands of deployments from different organizations. It also means that someone that’s using Element isn’t locked into Element — they can switch to any other Matrix-powered client and not lose any data.

Separately, a method called “bridging” opens up support for third-party apps not built on the Matrix protocol, including Telegram, Slack, WhatsApp, and rival open source messaging tools such as Mattermost.

Earlier this year, a new startup called Beeper entered the fray, courtesy of Eric Migicovsky, who sold the company’s previous Pebble smartwatch business to Fitbit back in 2016. Beeper is a universal chat app built on Matrix, and it uses bridging to relay messages between more than a dozen chat apps including iMessage, WhatsApp, Slack, Twitter, Hangouts, and Facebook Messenger. 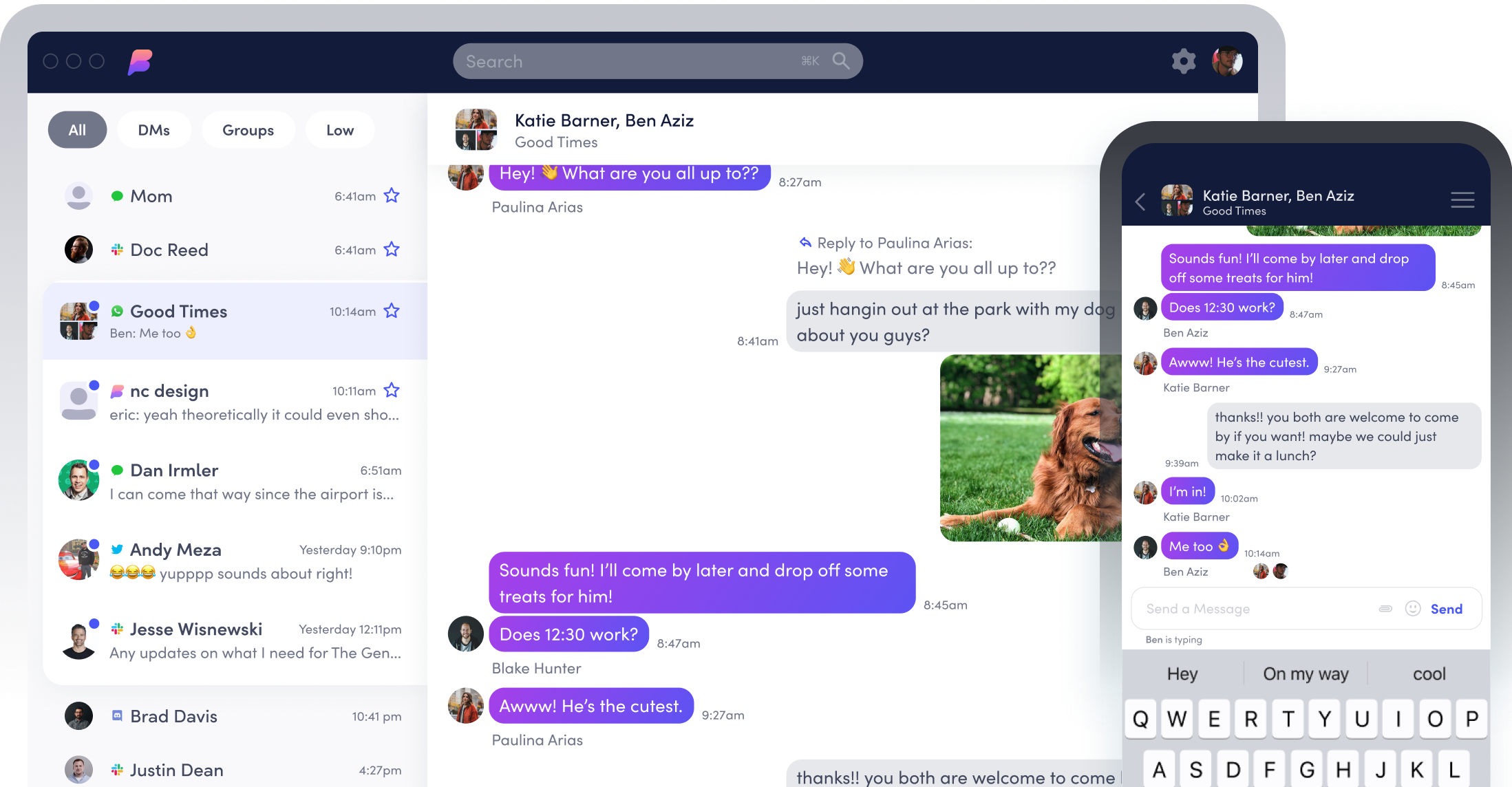 Above: Beeper: A universal chat app

News emerged last week that Gematik, Germany’s national agency responsible for digitization the country’s health care system, was switching to Matrix. This followed several years of siloed digital transformation that resulted in the various health care bodies unable to communicate with each other, while also raising questions over the security and privacy of the systems they had chosen to transmit confidential medical data.

Some 150,000 separate organizations constitute Germany’s health care system, spanning hospitals, local doctors, clinics, insurance companies, and more. Switching to Matrix affords the different parties some flexibility in terms of the specific apps that they use. They may have different use cases, but by adhering to a common standard, all the apps will still be able to talk to each other.

“This is a big undertaking, and there are 15 vendors so far involved — including Element,” Element CEO and CTO Hodgson told VentureBeat. “There will be a wide range of apps compatible with the system from different vendors.”

Several other commercial companies have previously built products on top of Matrix, including Ericsson’s Contextual Communication Cloud, a managed service that lets enterprises integrate advanced communication and collaboration services into their applications. And French giant Thales launched an instant message service for businesses called Citadel.Team, which is not too dissimilar to Element.

Element also recently renewed its French government contract, through which it targets its messaging and collaboration toolset to more than 5.5 million civil servants across France, while last year it signed a new contract with Dataport, selling commercial licenses to Germany’s education system.

All in all, it seems like Matrix has more than a little momentum, claiming 190% growth in the past 12 months, with more than 35 million “addressable users” across 75,000-plus deployments. And as the main commercial entity pushing the Matrix protocol, Element is well-positioned to capitalize on this surge with a continued focus on data privacy and ownership.

Data sovereignty is the concept of letting organizations choose where and how their data is hosted, and thus which laws apply to its governance — this is a massive deal for highly regulated industries and nation states. And in a world that is increasingly turning to the cloud and private infrastructure, many situations lead organizations to feel uneasy handing over all their data to a single big company.

“When communication is centralized, it becomes a very appealing target for abuse — whether that’s through propaganda, surveillance, censorship, or worse,” Element’s new investor (and Skype cofounder) Tallinn said in a statement. “Consumers need rescuing from surveillance capitalism, and organisations need a secure neutral way to communicate. Matrix is the most advanced platform to provide that missing communication layer.”

Salesforce’s multi-billion dollar Slack acquisition last week is a good reminder of what’s at stake. Data belonging to businesses that had gone all-in on Slack is now owned by Salesforce, whether they like it or not. And one of the reasons why Slack decided to sell to Salesforce in the first place was due to Microsoft’s aggressive bundling of Teams as part of its broader Office software suite, something that could soon face antitrust scrutiny in Europe. The point is, this whole episode shines a spotlight on the power and control “big tech” can wield, something that a decentralized “open” protocol like Matrix helps to solve.

“Salesforce’s acquisition of Slack is excellent news for Matrix,” Hodgson said. “It makes it crystal clear that when you are using Slack or Teams, your data is hurtling — encrypted only in transit and rest (i.e. not end-to-end) — into the big-tech clouds of Salesforce or Microsoft. Organizations of all shapes and sizes are frantically looking for alternatives which give them full sovereignty over their own data, rather than having to blindly trust that these tech giants will act as good custodians.”

The same principle applies to the myriad other enterprise team communication tools out there that adhere to an open source ethos, such as Slack-alternative Mattermost; Brazil-based Rocket.Chat, which offers various hosted and self-hosted tiers on top of its core open source chat platform, and which raised $19 million just a few months back; and Kandra Labs, which has developed a bunch of commercial products on top of open source chat platform Zulip.

Element, meanwhile, offers various pricing plans depending what the customer needs. The company offers Element Matrix Services (EMS), for example, which promises all the data sovereignty benefits of an on-premises deployment, except as a hosted service.

But what does that mean, exactly? “It’s hosted in that you get a dedicated instance just for you, run by us in a geography of your choice, which you can point your DNS at,” Hodgson explained. “Combined with end-to-end encryption, this means you have full ownership and control over your conversations — you have effectively just outsourced the administration of your server to the people who wrote it in the first place.”

Element had previously raised around $18 million, and with its latest cash injection the company is now well-financed not only to bolster its own product, but also the foundational Matrix protocol that now powers a host of open source and commercial services. And in the process, it might just go some way toward breaking down communication silos.

“Element’s funding means there’s continued significant investment in the Matrix protocol, which hugely benefits the entire Matrix ecosystem,” Hodgson said. “Matrix will do for communications what the web did for information sharing. And just like the web, it’s an open standard, decentralized and universal.”