Epic Games Store LEAK: These could be the next free games after GTA 5 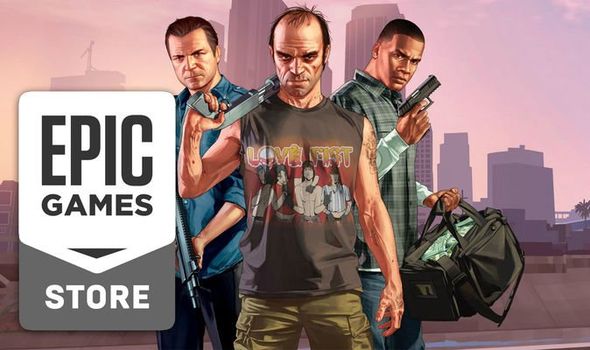 Epic Games Store has just launched their latest Mega Sale, and one of the most eye-catching offers is GTA 5 being available to download and keep entirely for free. The free GTA 5 download offer went live at 4pm BST on Thursday May 14, and will be available until the same time on Thursday May 21. So there is still plenty of time to take advantage of this great offer from the Epic Games Store.

When the latest Mega Sale went live Epic Games teased that more free downloads will be getting added that you “simply can’t miss”.

These free downloads will be available on a weekly basis until the end of the Epic Games Store Mega Sale on Thursday June 11.

And ahead of the release of the next Epic Games Store free download leaks may have revealed what the upcoming complimentary titles will be.

A post on Reddit, which was highlighted by tweeter Nibel, may have leaked the next four free games that will go live during the Epic Games Store Mega Sale.

According to the alleged leak, once the GTA V free download offer expires Civilization VI will be next up.

The most recent mainline entry in the critically acclaimed strategy series will allegedly become free-to-download from the Epic Games Store on Thursday May 21.

This will be followed by Borderlands: The Handsome Collection on Thursday May 28 and Ark Survival Evolved on Thursday June 4.

And – judging by the response on Twitter and Reddit – if that leaked list is accurate then PC fans will be thrilled with the upcoming Epic Games free downloads.

Another posted: “If I get Borderlands and Ark I will honestly be so happy”.

And another added: “Their servers are gonna blow up”. 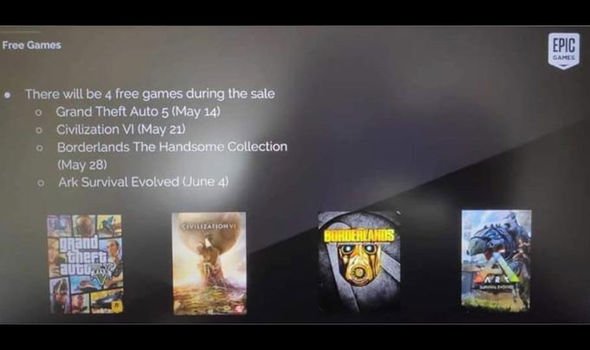 As with rumours, it’s always best to take them with a pinch of salt until official confirmation.

But there surely will be plenty of eyes on the Epic Games Store next Thursday when the new free game becomes available to download.

Aside from this brilliant freebie, the Epic Games Store Mega Sale has tonnes of great games at a discounted price.

Major titles that are listed in the Epic Games Mega Sale include Control, The Outer Worlds, Red Dead Redemption 2 and Borderlands 3.

And besides these money saving deals, the Fortnite makers are also offering a £10 coupon for every purchase of £13.99 or more.

Epic Games said: “In addition to four weeks of discounts on major titles we’re giving every player a £10 Epic Coupon.

“Use the £10 Epic Coupon to buy eligible content of £13.99 or more on the store (during the promotional period) and you’ll receive another £10 Epic Coupon.”