Ratchet & Clank: Rift Apart has a range of armor sets for you to acquire, with each set having three collectible pieces that together provide a permanent buff of some kind. These range from reducing damage taken by certain enemies, to increasing resource collection rates.

Armor buffs are applied universally even if the armor in question is not being worn, and so this list will also take into account the appearance of armors alongside the benefits they provide. This is all the armors in Ratchet & Clank: Rift Apart ranked. 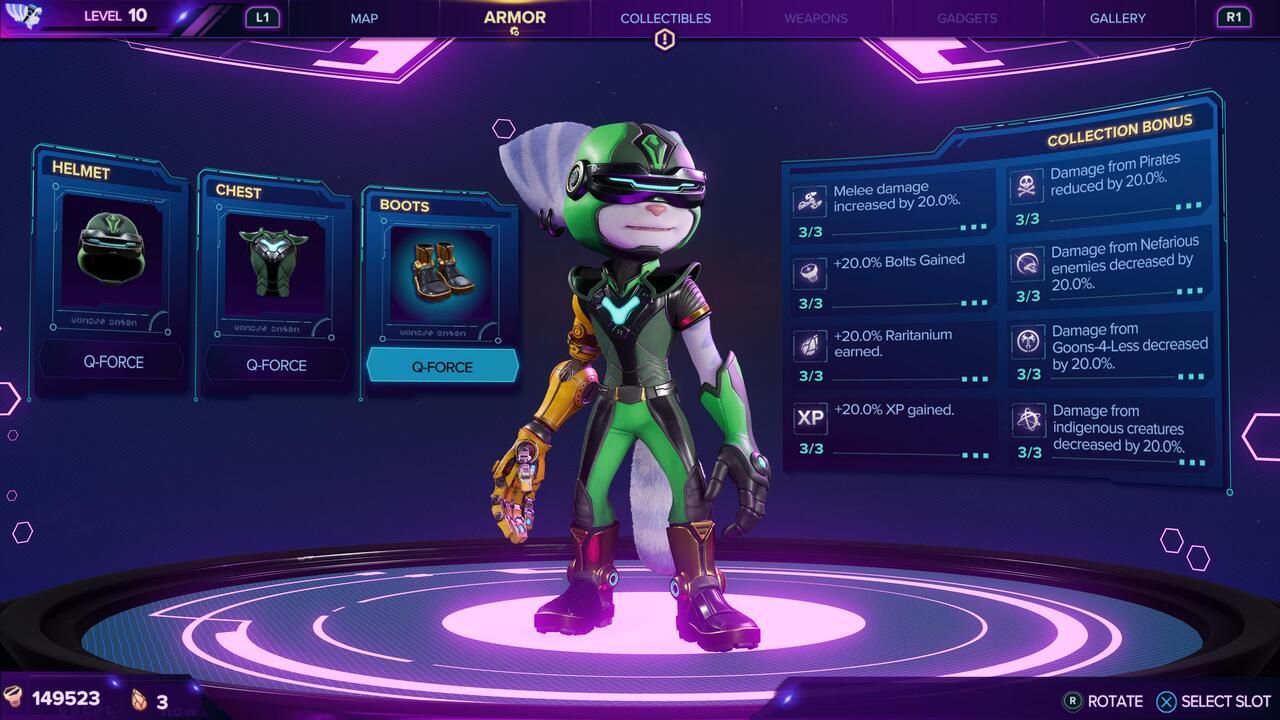 The Q-Force armor is a reference to Captain Qwark’s task force seen in Up Your Arsenal and offers a 20 percent damage reduction when Ratchet and Rivet are fighting the Goons-4-Less mercenaries. The armor is certainly eye-catching, featuring a tight set of leggings that were definitely designed by Captain Qwark.

Where To Find The Q-Force Armor

The helmet is located in a pocket dimension on the Scartsu Debris field, the chest piece is located in the prison cells on Viceron, and the leggings are on Blizar Prime. 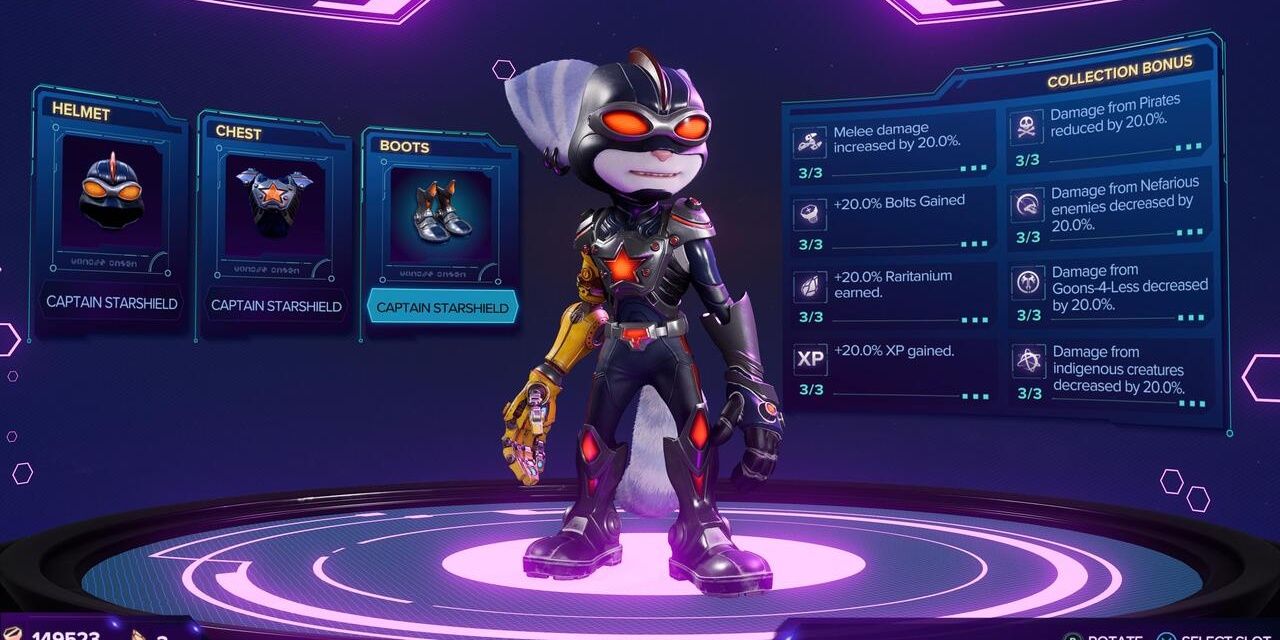 The Captain Starshield is a callback to an obscure character seen in the intro cutscene to Deadlocked, in which the Captain in question is killed within ten seconds of the game starting. It’s a cool-looking armor set though and provides players with a 20% buff to all XP gained across the game.

Where To Find The Captain Starshield Armor 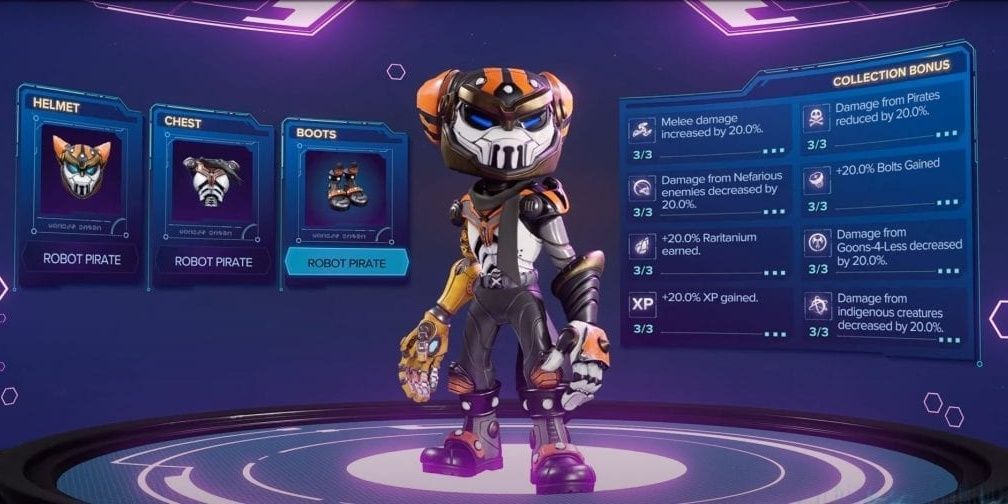 Where To Find The Robot Pirate Armor

The helmet is a reward for completing the pirate trials on Ardolis, with the chest being located on a moving platform on Savali. The boots are another reward, this time being for completing all the Bronze Cup challenges in the arena. 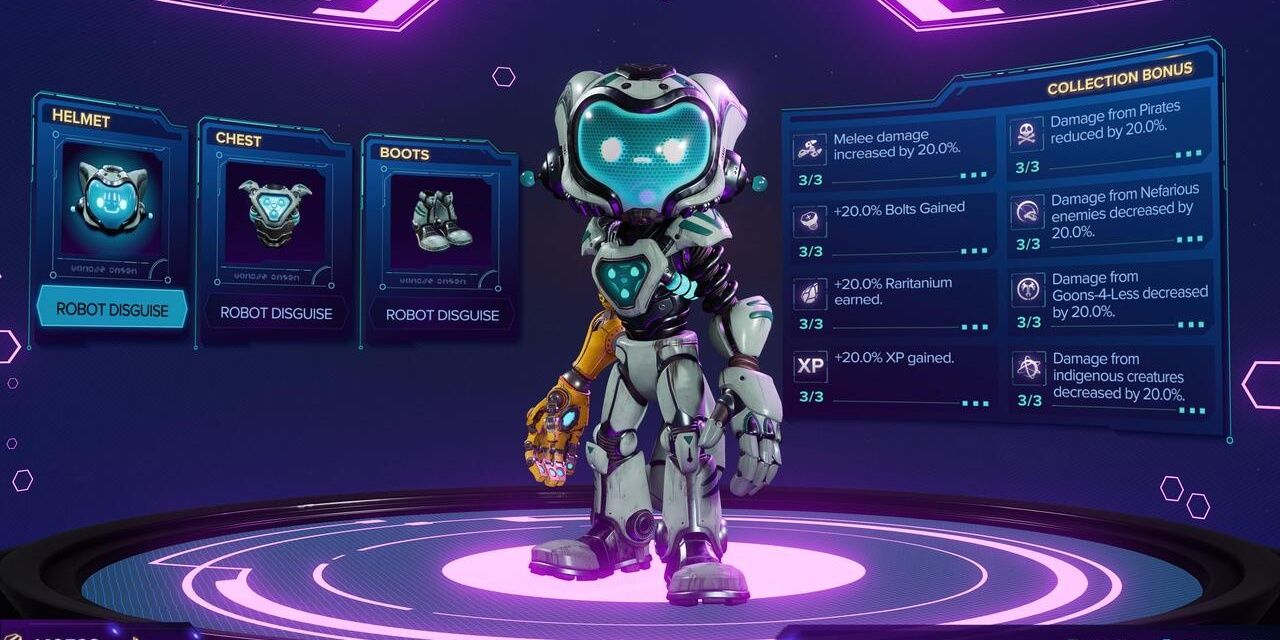 This is the armor that you will see the first time you meet Rivet, Ratchet’s alternate dimension counterpart, and it fits the futuristic vibe of Nefarious City. It also looks great when combined with the colour change feature included in Rift Apart, and provides a 20 percent damage reduction against Nefarious enemies when completed. These are some of the most plentiful enemies in the game, so it’s well worth completing this set as soon as possible.

Where To Find The Robot Disguise Armor

The helmet is located in a pocket dimension within the Nefarious City and the chest piece is in another pocket dimension on Sargasso. The third piece of armor in the set can be discovered in Sargasso’s second pocket dimension and requires you to make your way across a series of wall-running sections. 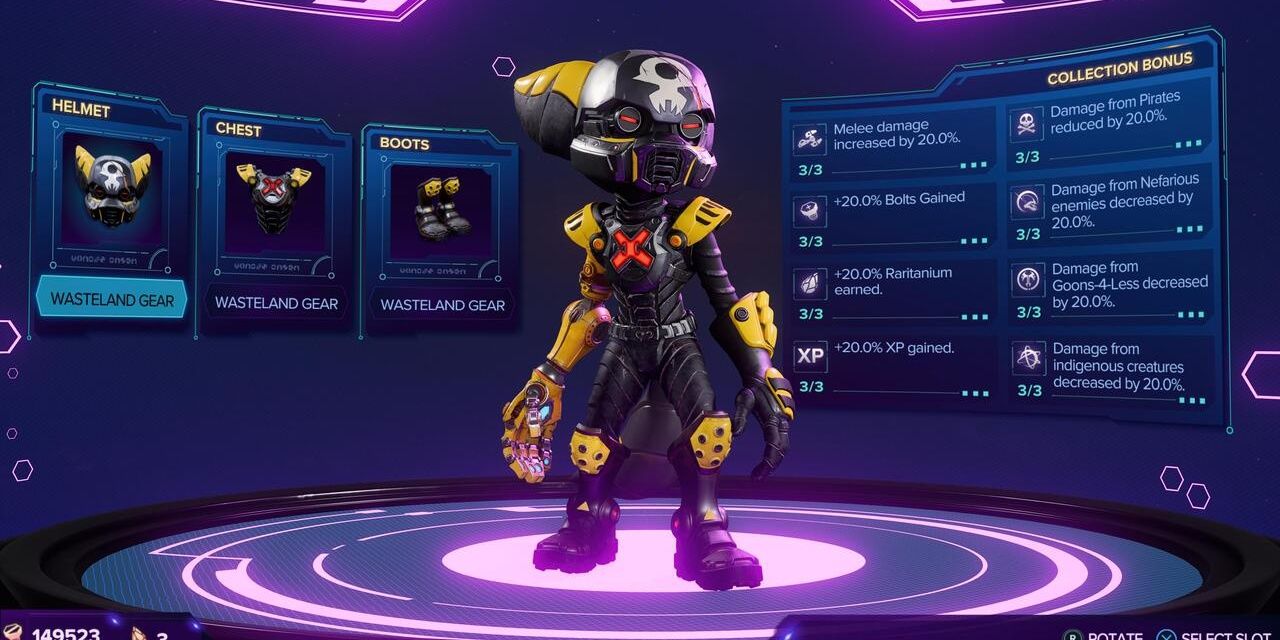 The Wasteland Gear is fairly simple to collect but certainly looks the part, looking like a combination of the typical armor seen in Ratchet & Clank but with a bit of Borderlands influence added on top. It grants players a 20 percent buff against indigenous creatures on all planets when the full set is collected.

Where To Find The Wasteland Gear

The armor is unlocked as a part of the Lorbs quest on Savali, with a Monk Scholar rewarding Ratchet with a piece after the collection of three, seven and then all twelve lorbs. It’s probably one of the most flexible armors in the game, looking great in most colour combinations. 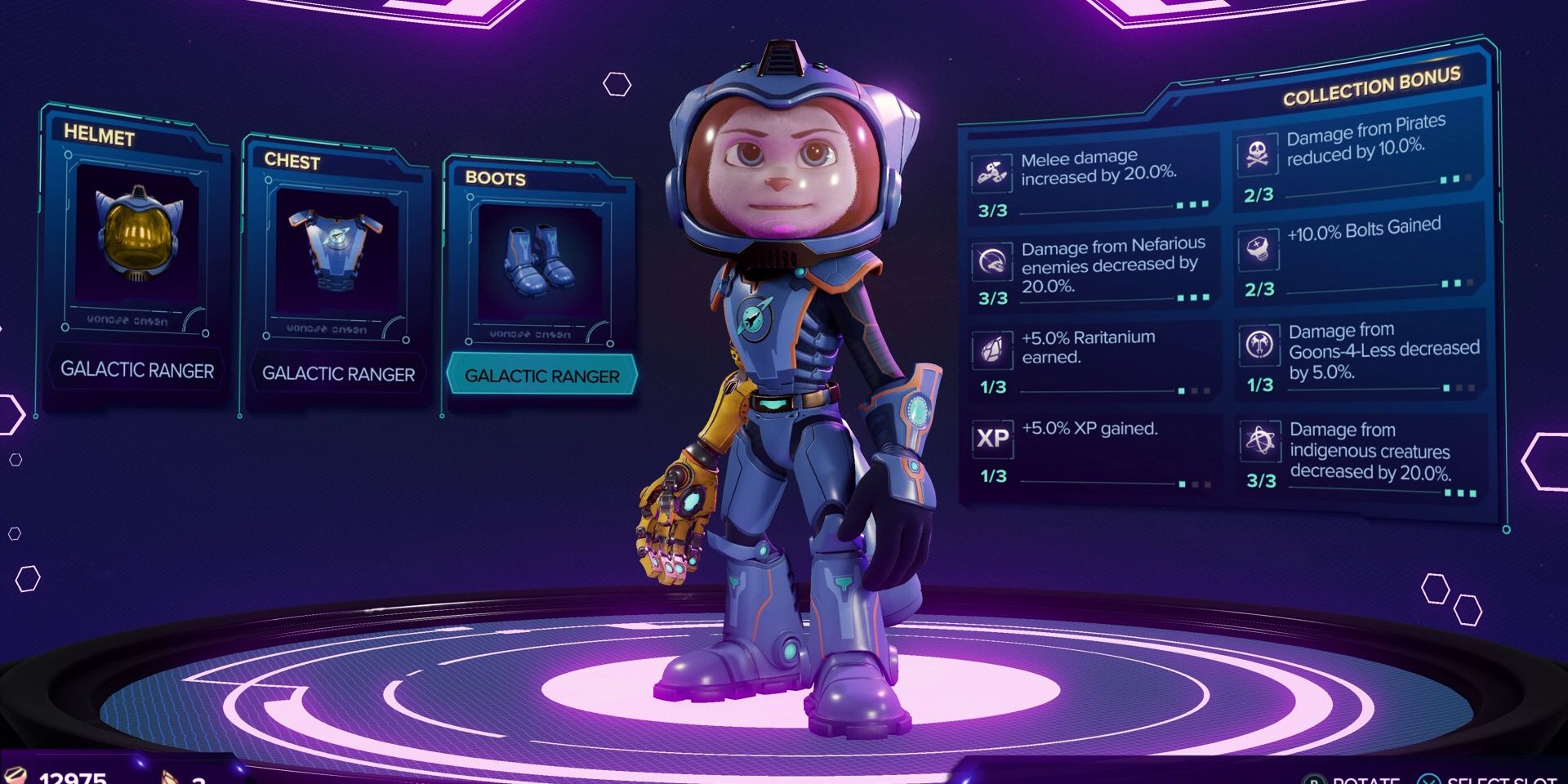 The Galactic Ranger set is inspired by the armor given to Ratchet in the 2016 remake of the first game in the series, although in Rift Apart’s continuity that game never actually took place. It has a great perk, offering players a 20 percent increase to all melee damage after collecting the full set.

Where To Find The Galactic Ranger Armor

The helmet and boots are discoverable on Sargasso, and the chest piece can be found in a pocket dimension on Blizar Prime. The plain design of this armor makes it a great option for the game’s color customizer, allowing you to show off some cool designs. 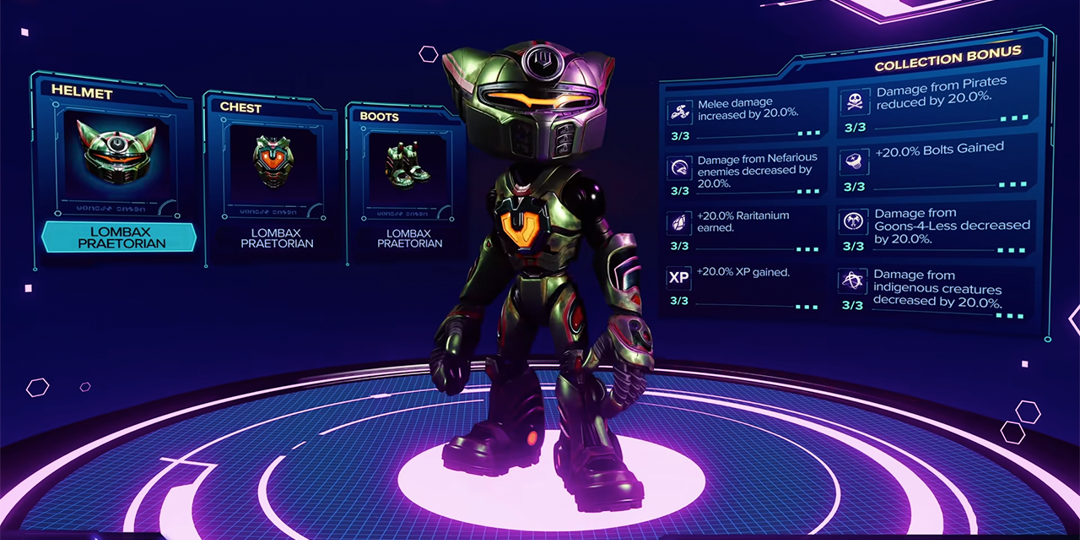 Simply put, the Lombax Praetorian armor is badass, being worn by elite Lombax warriors, and of course Ratchet and Rivet! It has one of the best perks in Rift Apart, offering players a 20 percent increase to Raritarium earned. Considering Raritarium is a limited resource, it makes it incredibly useful across the whole game.

Where To Find The Lombax Praetorian Armor

All three armor pieces are located in pocket dimensions, with the planets these dimensions are on being Torren IV, Viceron and Savali. The armor has a nice metallic sheen to it and looks great in the darker colours on the colour tab. 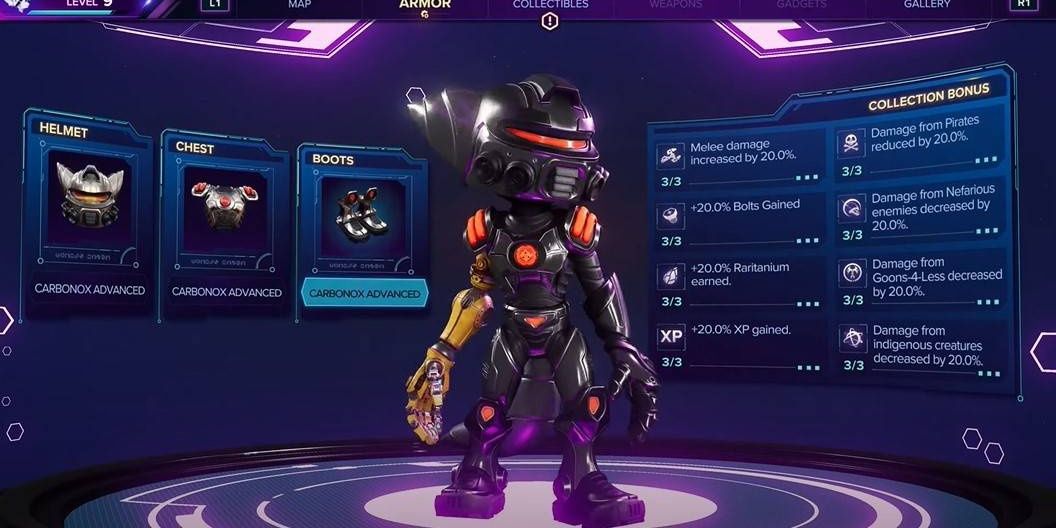 The Carbonox Advanced armor is a reimagining of the very first armor set in the series and was available as one of the game’s preorder bonuses. As well as looking amazing, it grants you the most useful perk in the game, a 20 percent buff on Bolts collected, which is especially useful in the game’s challenge mode when you are saving up to buy the omega version of weapons.

Where To Find The Carbonox Advanced Armor

Each armor piece is a reward for different challenges in the arena, with a piece being given to you for the completion of each of the arena’s three cups. These challenges can get fairly tricky, but the armor itself is well worth the grind.